To the absolute delight of telco lobbyists.

Facebook, Twitter, and Google were threatened by lawmakers from three distinct quarters on Wednesday. A leaked email from the largest US telecom lobbying group tells us where this is headed.

One threat came during testimony from Facebook's Sheryl Sandberg and Twitter's Jack Dorsey to Congress when Senator Mark Warner told the pair of executives that "Congress is going to have to take action here. The era of the Wild West in social media is coming to an end."

Hang on to your spurs. The other threat came after that testimony, when Trump's Justice Department warned action against leading technology companies for "intentionally stifling the free exchange of ideas" and hurting competition. Working in concert with this was a third threat, which came from the FCC's Ajit Pai who targeted Google, Facebook, and Twitter in a Tuesday blog post saying it was time for these companies to have government oversight.

Pai, to the surprise of no one, parroted an email of talking points crafted by the largest organization of telecom lobbyists, US Telecom. An email that was accidentally sent last week to reporter Mike Masnick at the blog TechDirt. The telco lobbyists' talking points hinged on "increased scrutiny of Facebook" and "Trump/Google Drama" to focus a push on "Congress to implement clear and consistent rules that apply equally to all companies in the internet ecosystem."

Because he can't keep his mouth shut, Trump (of course) warned this was coming in tweets and comments to press just one day before TechDirt got US Telecom's errant email and its 12-page document of talking points. 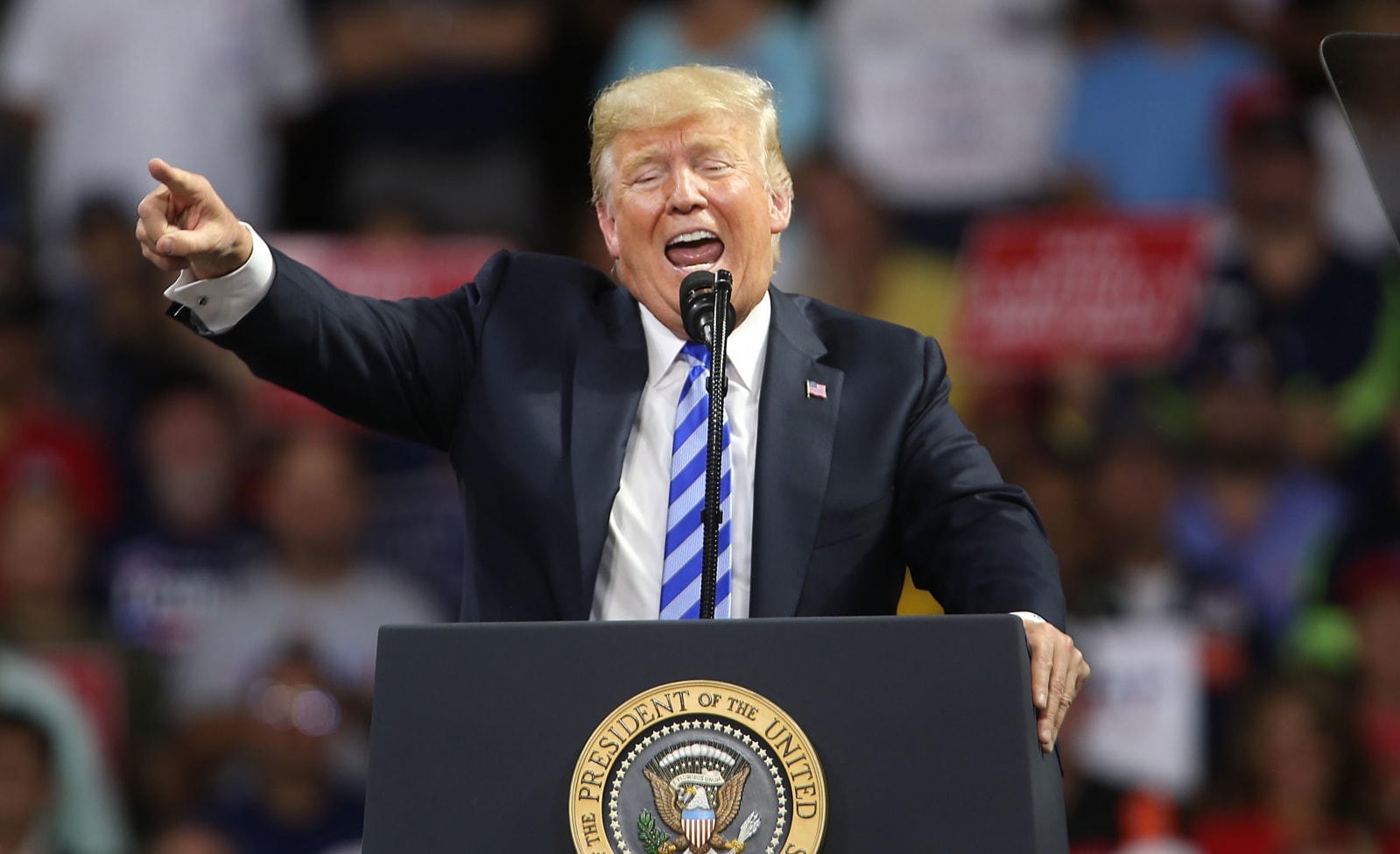 It's a sloppy attack campaign. But they manage to stay on message, even if by accident. Through and through, everyone's attack points against Facebook, Twitter, and Google were anchored in a neo-conservative PR campaign against perceived bias and alleged censorship from these companies. Each have been careful to say they don't want regulation.

Which is why it was strangely perfect that the Senate Intelligence Committee testimony Wednesday was supposed to be a follow-up on 2016 social media attacks by Russia and the Cambridge Analytica scandal, but instead devolved into accusations of Republican censorship, and was attended by alt-righties Alex Jones, Jack Posobiec, and Laura Loomer.

Lending nothing but credence to their plight, the alt-righty conspiracy mongers behaved very much like they do on the very services who they think have done them wrong.

At a random point in the hearing, Loomer began straight-up screaming her grievances about Twitter's wrongs against the alt-right. You know, Twitter, which was (until yesterday) the last man standing for Alex Jones. The scene was so contrived, Republican U.S. Representative for Missouri William H. Long -- who is also an auctioneer -- trolled Loomer by drowning her out with an impromptu auctioneer improv while she was dragged from the room bellowing "Jack is a liar" and the entire room lost its composure to laughter.

Alex Jones creeped the proceedings from a seat in the hearing room, looking grubby and desperate, as if Jack Dorsey might drop a dollar bill on the floor at any moment. Perhaps his deplatforming by everyone and his dire-outcome lawsuits from parents of dead children he's lied about and harassed are taking their toll.

I point out these distractions because they're important. The sideshow performers perfectly illustrate a charade played by companies who claim to fight propaganda and "fake news" as they hand narrative control to, make exceptions for, and cater to — the very Americans who create disinformation and fan its flames.

Senate Intelligence Committee chair, Republican Senator Richard Burr, began the hearing with nice words about social media then set the stage saying, "But we've also learned about how vulnerable social media is to corruption and misuse. The very worst examples of this are absolutely chilling and a threat to our democracy."

Sandberg's ultimate response to this was to tell the Committee that Facebook had made mistakes (wink) and would "hire more people to review content and invest more heavily in artificial intelligence that can spot fake accounts," according to Washington Post. Essentially doubling-down on doing everything that hasn't worked so far. Sandberg, whose company makes the majority of its political ad spend from Trump, whose board boasts Peter Thiel and whose CEO majority-spends his donations on Republicans. Who coddled the 2016 Neo-conservative "censorship" PR campaign with an unusual Zuckerberg sit-down with Trump's Barry Bennett, Glenn Beck, and others benefiting from all those Russian ads and Alex Jones conspiracy theories. Whose company caters to conservatism so hard that Sandberg personally endorsed legislation that made sex discrimination against women legal, a platform on which the Venus of Willendorf is reflexively banned for being "dangerously pornographic." Though in consideration of all this, and that Trump-GOP are the company's top political ad spender, as the rules of the swamp go, it wouldn't be a surprise to see America's current government go easier on Facebook than others.

Facebook, which history is documenting as the website of our era that has done more harm than good.

Dorsey did what he does these days, which is wander beard-first in a devolving circle similar to Facebook in pretending to care about fighting democracy-destroying propaganda while serving some higher aim of fairness that always, somehow, ends in making conspiracy-pushing neo-conservatives happy. "We found ourselves unprepared and ill-equipped for the immensity of the problems we've acknowledged," he said. "Abuse, harassment, troll armies, propaganda through bots and human coordination, disinformation campaigns and divisive filter bubbles — that's not a healthy public square."

The Ringer nailed why this is BS last month, writing:

"We do not look at content with regard to political content or ideology," Dorsey told CNN's Brian Stelter. "We look at behavior." So Dorsey posits a mythical framework in which it's possible to disentangle neo-Nazi rhetoric from neo-Nazi mobilization.

Meanwhile, Google skips the meeting as its YouTube property cements its reputation as the number one place to be radicalized while being the top spot for being censored over human sexuality and LGBT content. For those of us who were around when all these companies began, standing on the shoulders of us who fought for speech (not Nazis with a PR team trying to sell supplements, or run the country like a failed hotel) ... I just have this to say: No one has any sympathy for you, tech companies. You're doing it wrong.

So the telcos get their Pai in the sky pulling strings to screw Google somehow and to be able to continue throttling firefighters. And the Dorseys and Sandbergs, and the Pages, and their well-paid employees get to keep their money and enjoy the game of PR chess that doesn't really affect them. Dirtbags like Alex Jones, antithetical to the foundations of the open internet, will get soft landings and golden parachutes.

When you think about it, it was just a matter of time until the extremist, conspiracy-fueled government that Facebook, Twitter and YouTube catapulted into power decided they, the tech companies, were next. Of course, who actually suffers is everyone genuinely already suffering, because no one in power here cares about sex workers being discriminated against, the complete dismantling of our privacy, or people of color being run off services that are today's "public square."

All we need to know about Google, Facebook, and Twitter is this: their bottom line is "engagement." Imagine if you owned a pub and the thing that made you the most money was when your patrons fought each other. That's it.

A lot happened in the news this week. Yet the fact that multiple branches of the US government declared war on the three largest internet companies, the ones hosting most of our public discussion and debate, is a much bigger issue than a conservative bureaucrat's CYA op-ed in the New York Times.