It looks the part, but doesn't have the guts required to play the part.

Samsung's latest Surface wannabe has a surprising twist. On the outside, the Galaxy Book 2 looks very much like a clone of Microsoft's detachable, thanks to its new kickstand. But Samsung chose to equip the Book 2 with a Snapdragon 850 processor, turning this 2-in-1 into a Windows on ARM device that promises constant connectivity and a long-lasting battery. Add a brilliant display and an included S Pen and you've got a strong Surface Pro alternative. The company's proposition is compelling, but one big question remains: does speedy LTE and a super-long-lasting battery outweigh performance and app compatibility? The answer depends on your needs.

I wouldn't go as far as to call the Book 2 a thing of beauty, but it's certainly easy on the eyes. Its magnesium body feels smooth and sturdy, and its dark silver sheen is subtle and classy. This year's Galaxy Book also comes with a kickstand built in. It's an obvious rip off of the Surface, but it's a great addition, so I'm not going to complain. I was slightly nervous at first about the sturdiness of the thin aluminum kickstand, but I haven't encountered much wobble.

I had similar concerns about the companion keyboard, which is included, as it flexes and feels kinda flimsy. On other keyboards like this, I've had issues with the trackpad registering a click if I rest my palm next to it. But because this keyboard attaches at an angle, it avoids that issue and makes typing surprisingly comfortable. Individual buttons have ample travel, and the layout is well-spaced, too. I would hesitate to call the experience of writing this review on it a joy, but I didn't hate it.

I was also impressed at the responsiveness of the touchpad -- it's smoother than other detachables I've tested, with noticeably better latency. I just wish it was slightly bigger, but given how little room there is on this thing, I can't complain. 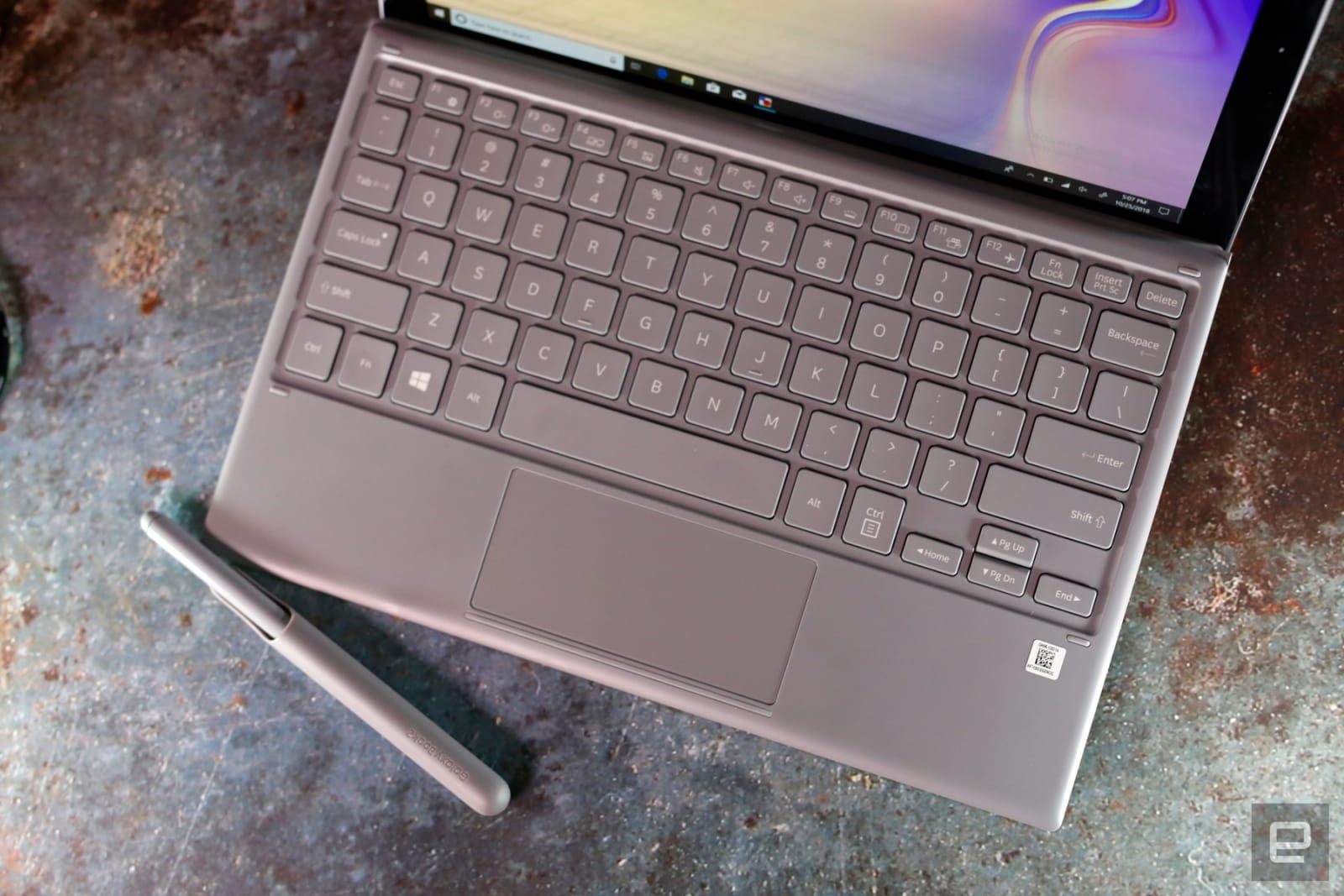 When I'm not busy writing reviews, the Galaxy Book 2 is a great device for entertainment, too. Its vibrant 12-inch screen might be less pixel-dense than competitors like the Surface Pro 6 and iPad Pro 12-inch, but Samsung's expertise in display tech comes through here. The Galaxy Book 2's AMOLED panel delivers deep blacks and rich colors, making my favorite movie characters (Vision, baby) pop. The AKG-tuned speakers pushed through crisp audio, though it could stand to be a little louder, especially in the midrange.

Samsung also includes its excellent S Pen with the Galaxy Book 2, which offers a smooth drawing experience. It docks to the tablet magnetically, which isn't the most secure way to stow your stylus, but at least it's there.

Here's what I really wanted to find out in this review: Is a Snapdragon 850 PC better than the Snapdragon 835? The Galaxy Book 2 is the first system we've tested with Qualcomm's new made-for-PCs CPU, which promises 30 percent better performance than those using previous systems. Indeed, the Samsung Galaxy Book 2 was much faster than the ASUS NovaGo, which uses a Snapdragon 835, at batch processing a set of 10 images. It completed the task in about two-and-a-half minutes, while the NovaGo took a full minute longer. The problem is, both those results are painfully slow compared to Intel systems, which took about 10 seconds.

Say you want to play games on your 2-in-1 for some reason. You can actually install Steam on the Galaxy Book 2 and get right to it. I was able to not only install the Steam launcher but also my favorite game -- The Jackbox Party Pack. I used Steam on the Book 2 and an Intel-connected PC concurrently and noticed a very slight delay on the Samsung device that felt like an emulator lag. It's not major, but certainly not as zippy as on an x86 system. 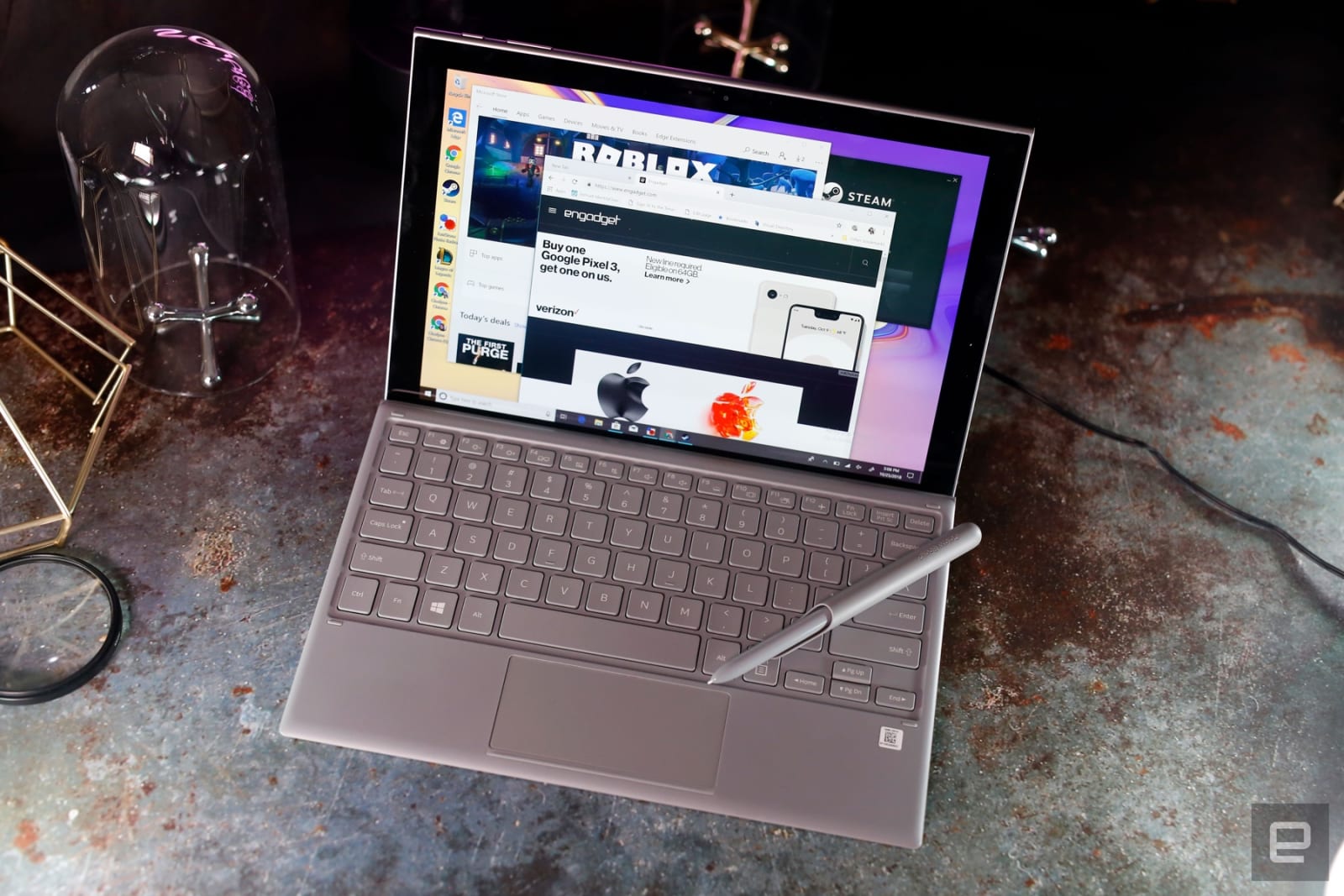 Some things will simply refuse to run on a Snapdragon PC, like the PCMark benchmark, for example. On occasion, though, the Book 2 beat a competing Intel system on things like unzipping a large file or installing League of Legends.

For most of my workflow, which is typically done within a browser, Snapdragon systems aren't noticeably slower than their Intel counterparts. But when I need an app like Faststone Photo Resizer, the delay is excruciating.

What Qualcomm's PCs have over Intel alternatives, though, is longer-lasting batteries. The Snapdragon 850 CPU even promises 30 percent more juice than its older brother -- and Snapdragon 835 devices were already supposed to last up to 20 hours.

The Galaxy Book 2 stuck around for impressively long on our battery test, conking out after a full 15-and-a-half hours. That's not 30 percent longer than the ASUS NovaGo's 14-hour result, but still a significant improvement. I tested both devices in full Windows 10, not the limited S mode, which is what you're supposed to use if you want to hit the 20-hour mark. This means you could potentially get even more juice if you're willing to sacrifice a proper desktop environment (though I don't recommend it). 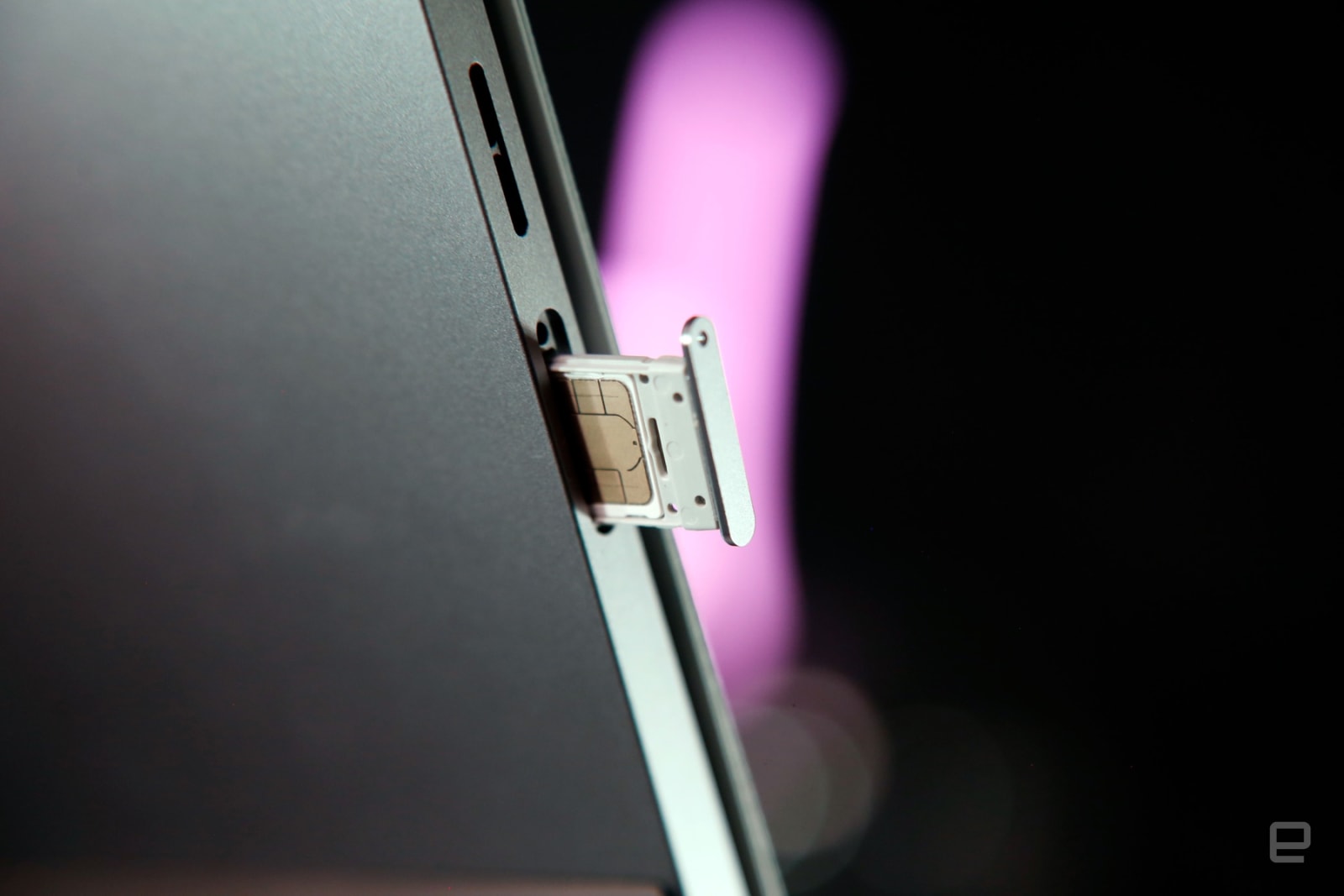 Another theoretical upside of a Snapdragon PC over an Intel option is faster LTE speeds. Qualcomm has far more experience building cellular radios, and the Book 2 packs a Cat 18 X20 LTE modem that can theoretically hit 1.2 Gbps, which is better than Intel's Cat 10 XMM 7360 that peaks at 450 Mbps. While I did enjoy high download speeds almost everywhere I went, I was surprised to find during a side by side Fast.com test (on the same network) that the Book 2 didn't score much better than an Intel system (the HP Envy x2) at all.

There aren't any other Snapdragon 850-powered devices in the market -- Lenovo was the first to announce a laptop with the chipset but we haven't tested it yet. That means the Galaxy Book 2 has very little direct competition -- but there are plenty of other Snapdragon PCs to consider, like the HP Envy x2, Lenovo Miix 630 and ASUS NovaGo. Those all use the older Snapdragon 835 chip, so you'll have to make do with slightly poorer performance and battery life.

You can (and should) also consider Intel systems like Lenovo's 2018 Thinkpad X1 lineup and Acer's Swift 7, which should offer more reliable performance and have SIM trays built in. They're not all 2-in-1s, though -- only the Thinkpad X1 Tablet is, while the others are laptops. I'm still testing an HP Envy x2 with an Intel Core i5 CPU, which is also worth considering, though so far the Galaxy Book 2 delivers a better screen and keyboard.

The Book 2's toughest competition in the space is the Surface Pro 6. It's an excellent workhorse with a stylish new black outfit, and it even delivered similar results on our battery test. The only drawbacks are that it doesn't offer built-in LTE connectivity and is about $200 more expensive than the Book 2 when you include the cost for a stylus and a keyboard. Samsung includes those accessories in the Book 2's $999 price. 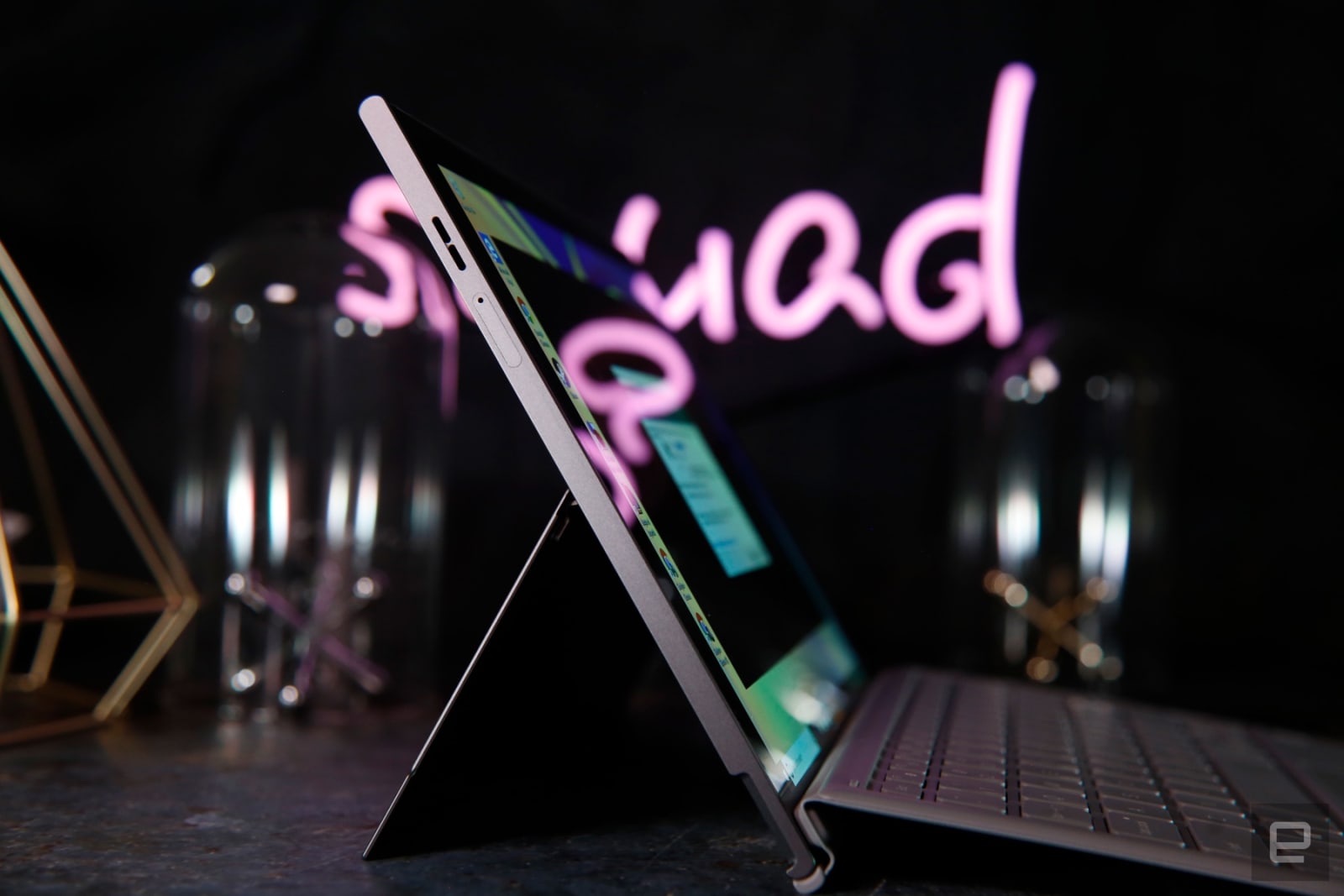 The Galaxy Book 2 is a decent Surface Pro alternative with a noteworthy caveat. It rivals Microsoft's tablet in almost every respect, except for performance, and even offers the bonus of gigabit LTE. I'm impressed that the Snapdragon 850 delivers on the speed and battery promises Qualcomm made, and I really like Samsung's efforts on the Galaxy Book 2's hardware. In the (admittedly small) world of Windows on Snapdragon, this is perhaps the best option.

But Samsung and Qualcomm cannot ignore Intel's performance advantage forever. While Microsoft has made strides in enabling native 64-bit app compatibility for Windows on ARM, it still needs to work harder at reducing the speed tradeoffs. I like the Galaxy Book 2 a lot, but I can only recommend it to a select audience -- people who prize battery life and connectivity above all else and do most of their work in a browser. For these folks, the Galaxy Book 2 will do just fine.

All products recommended by Engadget are selected by our editorial team, independent of our parent company. Some of our stories include affiliate links. If you buy something through one of these links, we may earn an affiliate commission. All prices are correct at the time of publishing.
View All Comments
Samsung Galaxy Book 2 review: A better, but limited Surface rival