They can also charge other devices via USB-C.

Apple's iPad Pro is starting to look a little dated with its familiar design that hasn't changed much over the years. So it's nice to see that at its New York event today, the company unveiled a fresh new version. It's not a surprise by any means, thanks to all the leaks prior, but now we have more-official details. As expected, the new iPad Pros will have much slimmer bezels than before, thanks in part to getting rid of the home button and freeing up some room. In its place, Apple added Face ID for convenient authentication as well as a USB-C port.

There's also a magnetic edge to conveniently stow the Apple Pencil (though I found similar setups by Samsung a little insecure). The screen here has a Liquid Retina LCD screen similar to that on the iPhone XR, supporting things like True Tone and a supposedly "wide" color spectrum. We'll need more details on that, but what we can immediately see is that the display now reaches out to the edges.

Despite packing a bigger 11-inch display, the new iPad Pro retains a similar footprint to its predecessor. There's also a 12.9-inch version for those who need more real estate to work on, and that model is actually much smaller -- Apple said it's almost the same size as an 8.5 x 11 inch piece of paper. The new iPad Pros are just 5.9 mm thin, too, making them about 15 percent slimmer than before. 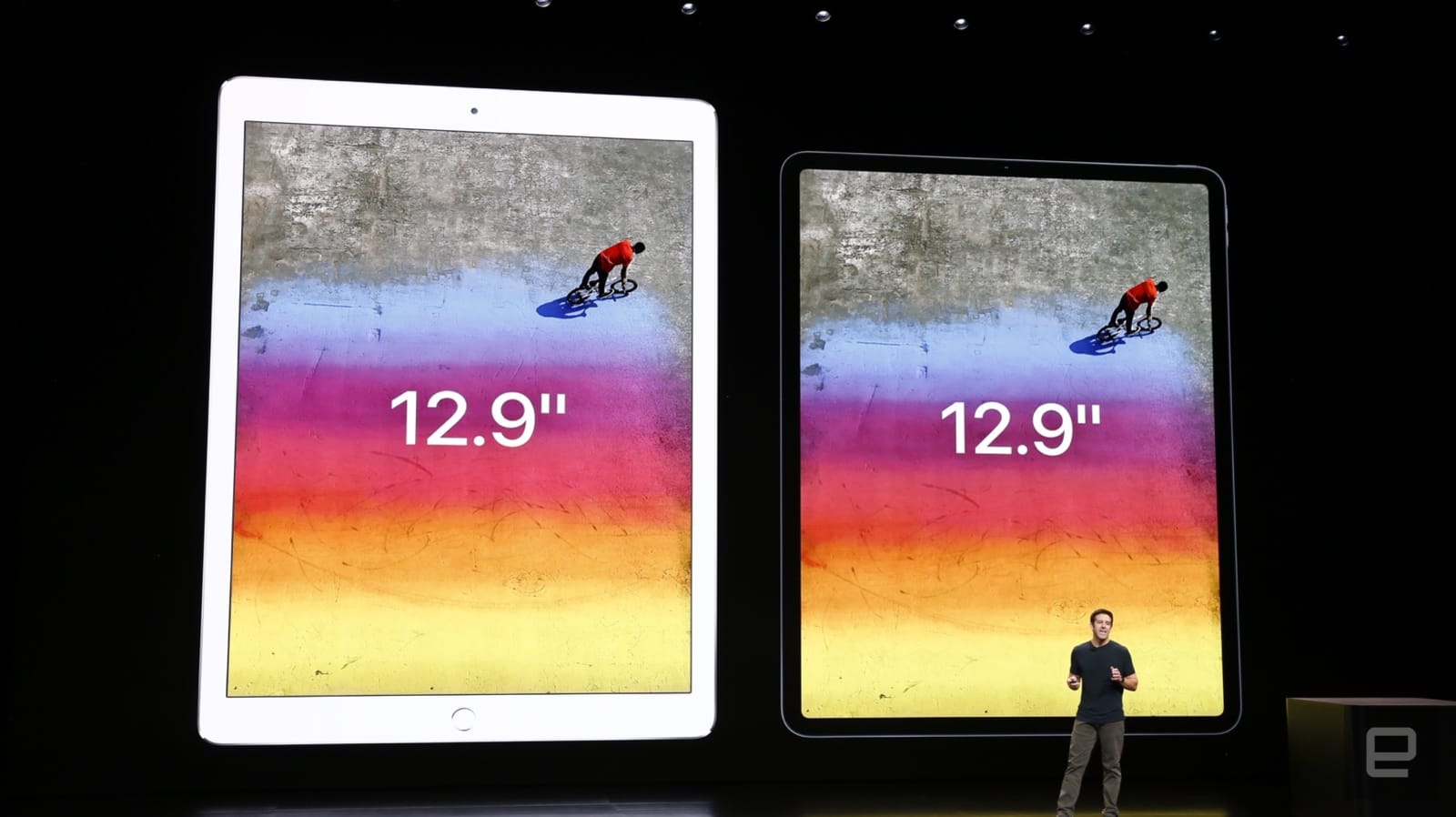 The iPad Pros now have software that's similar to the iPhones' as well, especially when it comes to navigation. You should experience zippy performance thanks to the octa-core A12X Bionic chips powering the iPad Pros as well as a 7-core GPU for graphics performance that Apple said is 1,000 times faster than before.

That's Xbox One S-class graphics performance, the company said. During its keynote, Apple showed off details like tattoos, beads of sweat and pinholes on characters' jerseys in games like NBA 2K to demonstrate the new iPad Pro's prowess. The company also used Photoshop and an Adobe AR app called Project Aero on the new iPad Pro to create and edit an augmented reality artwork, and it all appeared to happen smoothly and quickly. Of course, that's a well-rehearsed demo, so we'll have to test it ourselves to see about real-world performance.

Thanks to its USB-C port, the iPad Pro can not only connect to a wider variety of peripherals but also charge other devices like your iPhone. Speaking of accessories, Apple also has a new Smart Keyboard Folio for the tablet that's adjustable to prop up at more angles as well as an updated Apple Pencil.

Sadly though unsurprisingly, Apple also got rid of the headphone jack on this year's iPad Pros. You'll need a USB-C to 3.5mm adapter to use your old earphones.

You'll be able to pre-order the new iPad Pros today starting at $799/£769 (10-inch) and $999/£969 (12-inch), and they'll start shipping on Nov. 7th. LTE options are available for both sizes, and base models come with 64GB of storage, going up to 1TB. Considering these tablets outsold laptops from major companies like HP, Lenovo, Dell and Microsoft, I wouldn't be surprised if these new iPads fly off the shelves too.