Who can argue against skinnier bezels, longer-lasting batteries and a more-elegant design?

Razer is most famous for its gaming laptops, but the company also makes a series of non-gaming notebooks. The Blade Stealth series is a 13-inch ultraportable that was launched in 2016 as a travel-friendly notebook. But people can't stop associating Razer with gaming, and with the latest Blade Stealth, the company is adding a configuration packing a discrete graphics card so it can blend in while still packing enough power for your discreet gaming sprees.

The Stealth also got a subtle makeover to help it play the part of business laptop. Instead of a bright green logo on its lid like older models, the new Stealth has a gray version that's color matched to the laptop. Its anodized aluminum body felt sturdy and expensive, too, when I checked it out at a recent briefing.

Open it up and you'll see a familiar feature of gaming laptops -- a colorful keyboard. Instead of having lights for individual keys to create a multi-color look, the new Stealth features zone-based lighting. Whichever of the 16.8 million colors you choose for your keyboard is the hue that will show up under the whole deck. This helped Razer squeeze out more battery life from the device, which was a focus for the company this year.

The keys themselves were comfy to type on, thanks to the higher actuation (63 grams) compared to 58g from before, and I found the layout evenly and generously spaced. Razer also increased the size of the glass trackpad below the keyboard, which was roomy enough that I never felt like I was running out of space as I explored the Windows 10 interface. 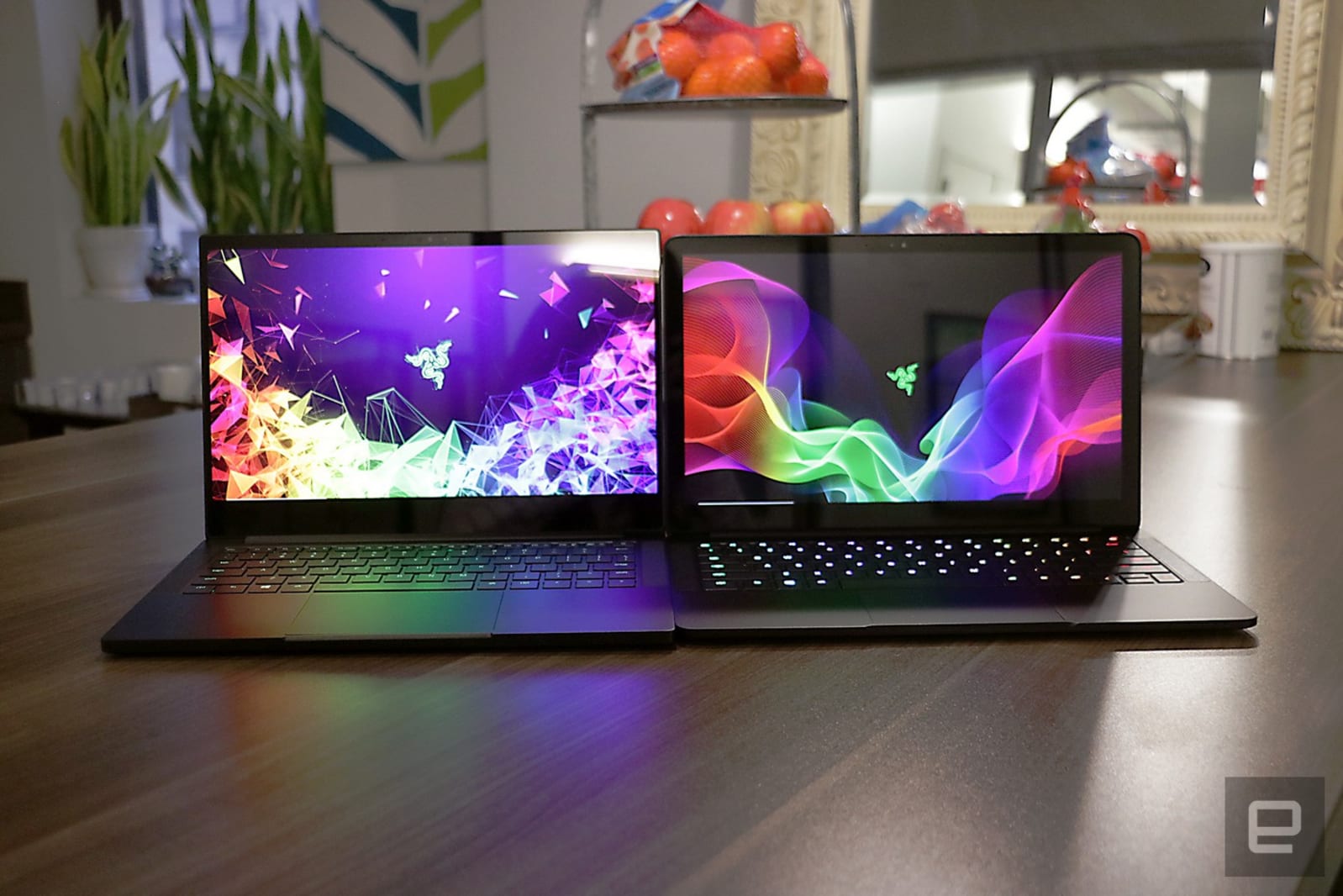 One of the most important changes Razer made was to shave the display bezels down to 4.9mm, giving the Blade Stealth a more modern appearance. Its top bezel is still quite chunky compared to the likes of Dell's XPS 13, but that's because Razer decided to house an Infrared camera above the display instead of a more-awkward below-the-screen placement. This also means the Stealth is the first Razer Blade laptop to support Windows Hello.

There are two configurations for the Stealth's 13.3-inch panel -- a Full HD matte option and a 4K touch version. Both models support a 100 percent sRGB color spectrum. The lower-res screen also uses Intel's latest low-power technology, and is brighter than last year's laptop, which only came in quad HD+.

I flailed about in a few rounds of Overwatch on a 4K unit of the Stealth that packed an NVIDIA GeForce MX150 graphics card. The laptop kept pace as I barely defeated five training bots and repeatedly died by accident, although my test unit did exhibit some noticeable fan noise. 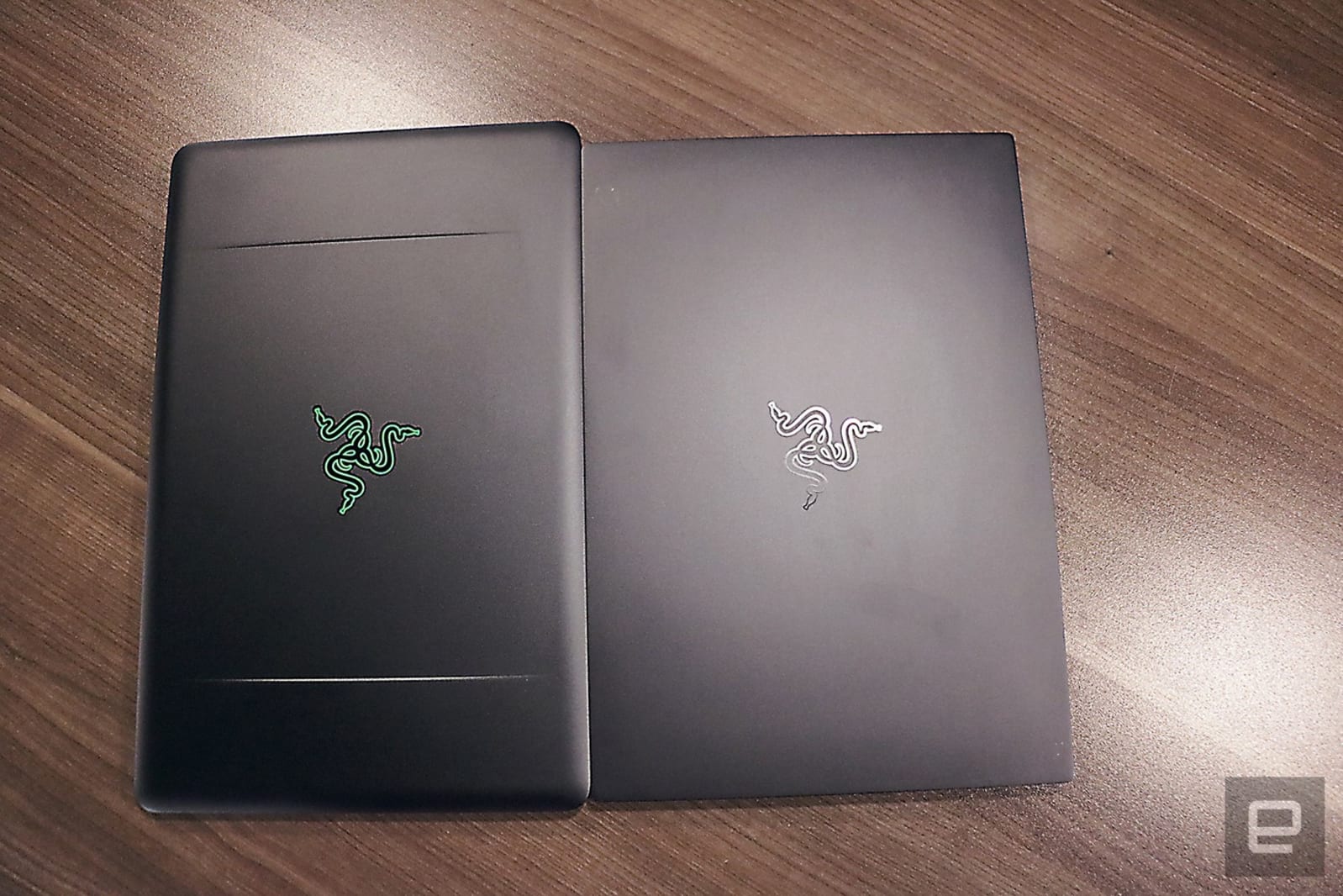 Speaking of, the Blade Stealth features a new thermal system featuring dual heat pipes, which Razer said is beefier than before and similar to the higher-end Blade 15. A better dissipation setup means more power, the company said, and the Stealth should be plenty capable thanks to its quad-core Intel Core i7 Whiskey Lake U CPU. It starts with base clock speeds of 1.8GHz, with turbo going up to 4.6GHz on a single core. While this card can handle relatively lighter games like Overwatch, Counter Strike and Fortnite, you'll need a beefier system if you're thinking of firing up Far Cry V or Call Of Duty at 4K resolution. Or you could connect an external GPU like the Razer Core for a real gaming session.

Configurations start with integrated Intel HD 620 graphics, so don't push the laptop too hard when you're gaming. But you can get a version with a discrete MX150 card for $200 more, and you'll also get a faster SSD with 16GB of RAM (compared to the 8GB in the base model). Razer said it uses a different, 25-watt version of the MX150 than other companies here, though, with 4GB of VRAM. That's twice as much as on competing systems, and allows for 30 percent better performance, according to the company. I haven't tested many other units packing MX150 so I can't vouch for this, though. 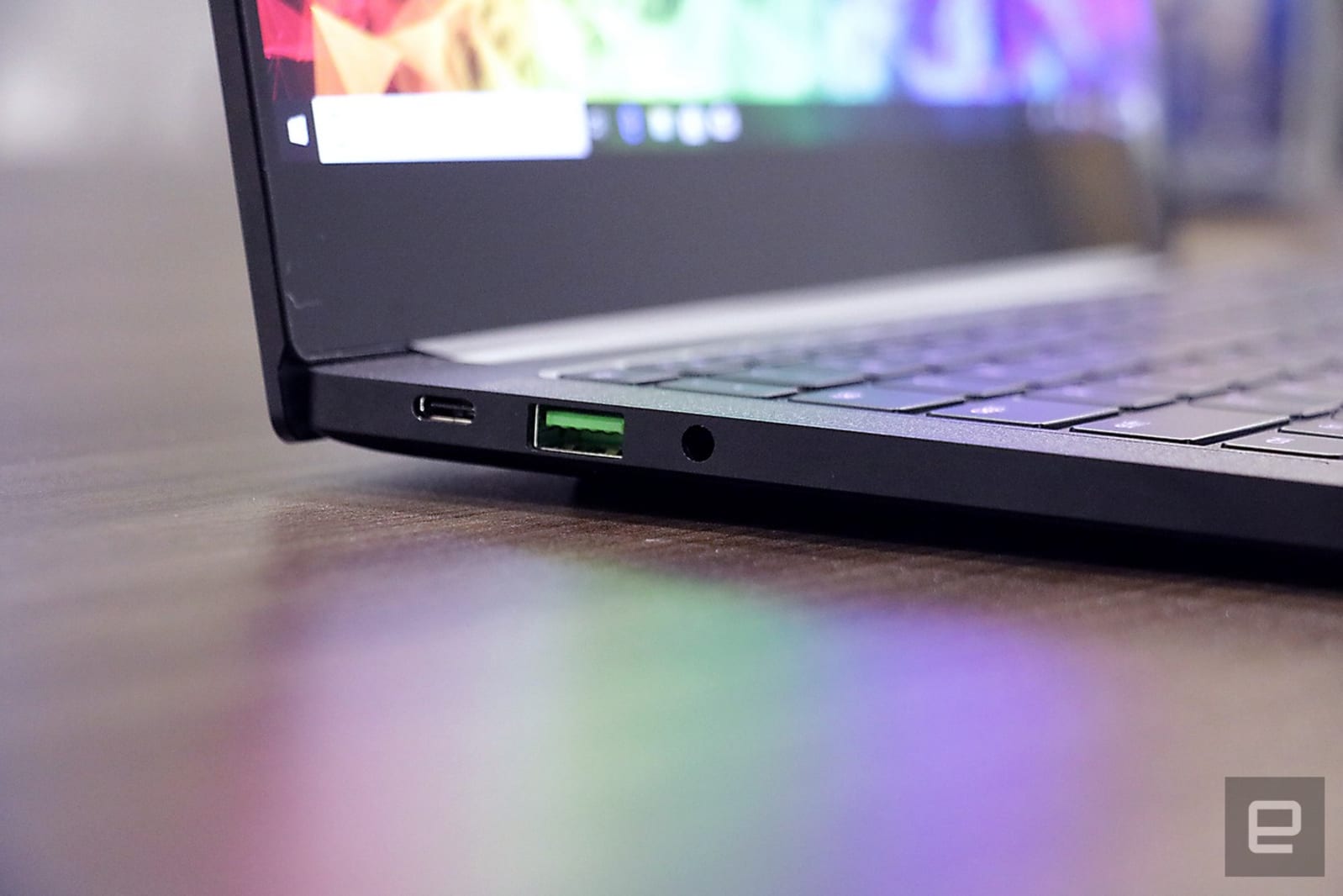 Thanks to a combination of the change in keyboard lighting, new low-power panel and updated processors, the new Stealth also promises significant improvements in battery life despite packing a similar 53 watt-hour cell as before. In fact, Razer is expecting you'll get up to 13 hours of juice. This is a key part of what the company wants the Stealth to be -- the most well-rounded ultraportable. Instead of focusing on making the thinnest or fastest notebook, Razer said it wanted to offer the best combination of battery life, performance, storage, display and audio. The new Blade Stealth certainly seems like a promising candidate for those looking for a travel-friendly laptop that's not a replica of the MacBook or Dell's XPS series.

If you want a machine that can double as a gaming rig, you can consider the 17-inch Blade Pro, which can be equipped with a GTX 1080 or the Blade 15, which comes with an up to GTX 1070 GPU. For those who are totally sold on the new Blade Stealth, though, you can get it today starting at $1,399 with an Intel Core i7 processor, 8GB of RAM and a Full HD display.

Update (at 1:02pm ET): This article was edited to clarify that both the Full HD and 4K versions of the Razer Blade Stealth's panel support 100% sRGB instead of the higher-res one supporting 100% Adobe.