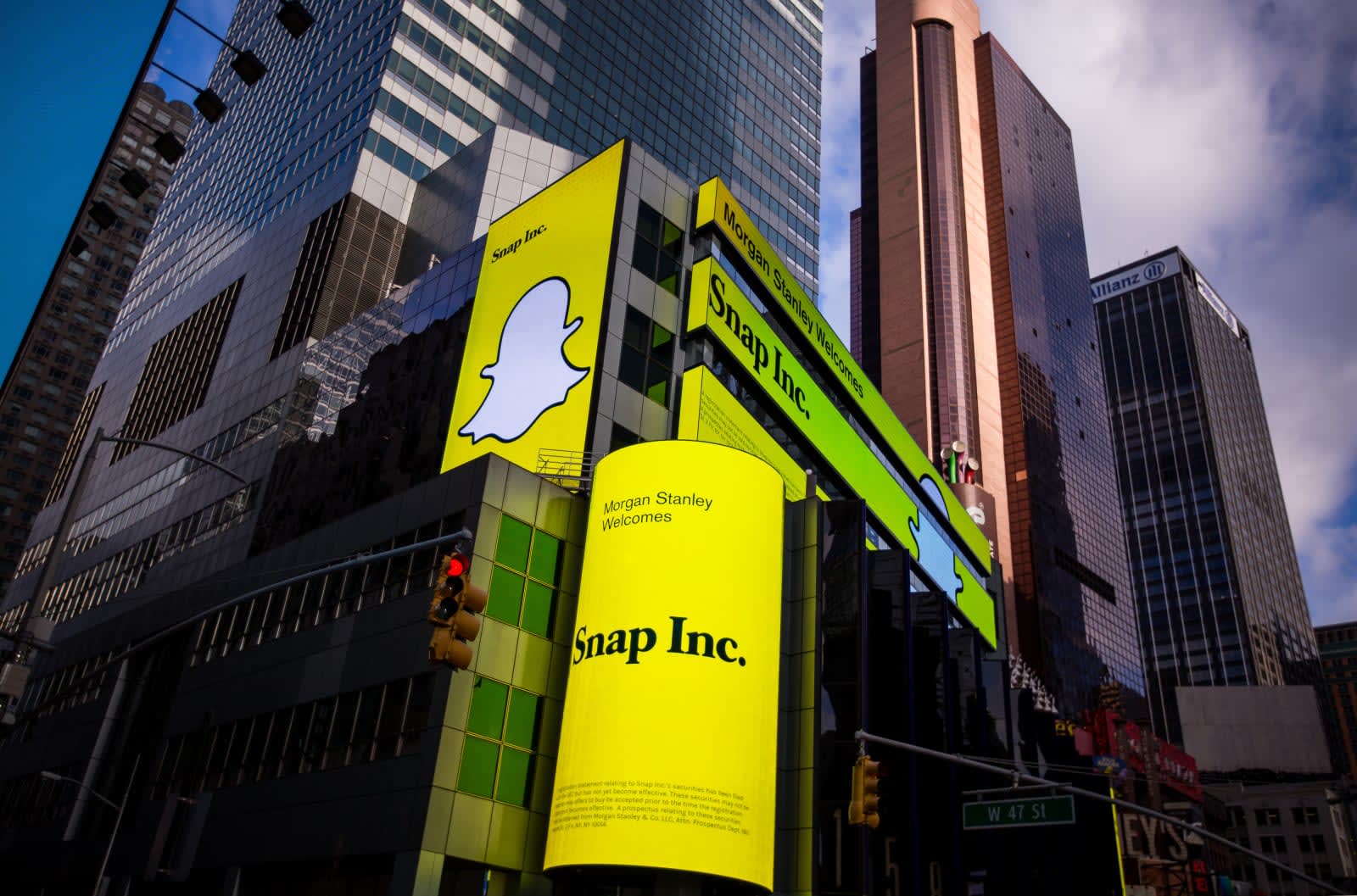 Snap Inc. took a major risk when it completely redesigned Snapchat a few months ago -- it's no secret that people don't like change. But after constantly struggling to add new users since going public last February, the company decided it needed to make adjustments in order to attract people and keep others coming back. The solution was to refine the app with an easier-to-use layout and to separate friends' posts from media content. Suddenly Snapchat became a more refined app. It no longer feels like an overwhelming, discombobulated mix of stories from people you know, others you don't and publishers that are trying to get your attention. And based on Snap's Q4 2017 earnings report, the move seems to be paying off.

Yesterday, the company revealed that it has finally managed to gain a significant amount of daily active users: 8.9 million during the most recent quarter, bringing its total to 187 million. That's the largest growth since 2016, long before it was a public company. While Snapchat continues to lag far behind rivals like Instagram and Facebook -- which have 500 million and 1.4 billion daily active users, respectively -- the app's progress is notable. This rings particularly true when Snapchat's redesign is still being rolled out and only 40 percent of its users have it thus far.

The response to the major overhaul is indeed a good sign for Snap and one that it may not have expected, especially since for the past three quarters, its future looked quite bleak. There wasn't enough user growth to keep investors happy, and it was bleeding money and laying off workers, all signs that Snap needed to change its strategy.

Naturally, more users means more money. Snap posted a record revenue of $285.7 million in the fourth quarter of 2017, a substantial 72 percent increase compared to the same period the previous year. Snap CEO Evan Spiegel attributed part of this spike to the popularity of Snapchat's sports content. "This season we entertained more than 30 million football fans in the United States with over 400 NFL Stories," he said, claiming it helped generate more than $100 million in revenue for Snapchat's content partners. Spiegel added that Snap's goal is to "deepen these relationships" in the coming years, which presumably means giving users access to more features (like that augmented-reality foam finger) when they're at NBA or NFL games.

Spiegel didn't go into any further detail about the rest of Snapchat's original-series efforts, leaving open the question of whether they're actually successful. CNN, for instance, killed its made-for-Snapchat daily show last December after the show failed to catch on. That said, Snapchat continues to draw interest from big, traditional networks like ESPN, which recently launched a Snapchat-exclusive version of SportsCenter. Part of the goal with the redesign was to do a better job of putting these shows front and center, therefore creating more revenue opportunities, and that plan seems to be working.

One of the Snapchat features that's also turned out to be popular is Maps, which shows a collection of public Stories from events around you so you can see what people are up to at certain locations in real time. It's the perfect tool for avoiding FOMO or stalking your friends at a concert. Snap said yesterday that Maps now has 100 million monthly active users, a notable accomplishment considering it only launched in June last year. At the moment, Spiegel said, there are no plans to monetize the feature, but don't be surprised if that changes.

"Our work during 2017 is proof that we aren't afraid to make big changes for the long-term success of our business," Spiegel said, referring to Snapchat's redesign. He also highlighted how vital it was to improve the Android app, where the focus was to have fewer frame drops and, most importantly, fewer crashes. The challenge for Snap now is to be able keep this momentum up. That's something it plans to do by introducing new features like Live, which is debuting as a partnership with NBC and will let Snapchat users stream "moments" from the network's Olympic Games directly on the Discover feed.

Only time will tell if Snap's new strategy will pay off in the long term, but at least right now, it's in good shape heading into 2018. And that alone is a win for a company that just a few months ago was in a downward spiral. Redesigns aren't always the answer to solve an app's problems, though that seems to be just what Snapchat needed.

In this article: business, design, discover, entertainment, evanspiegel, facebook, gear, instagram, internet, mobile, redesign, snap, snapchat, snapchatdiscover, snapinc, social, socialmedia, socialnetwork, socialnetworking
All products recommended by Engadget are selected by our editorial team, independent of our parent company. Some of our stories include affiliate links. If you buy something through one of these links, we may earn an affiliate commission.