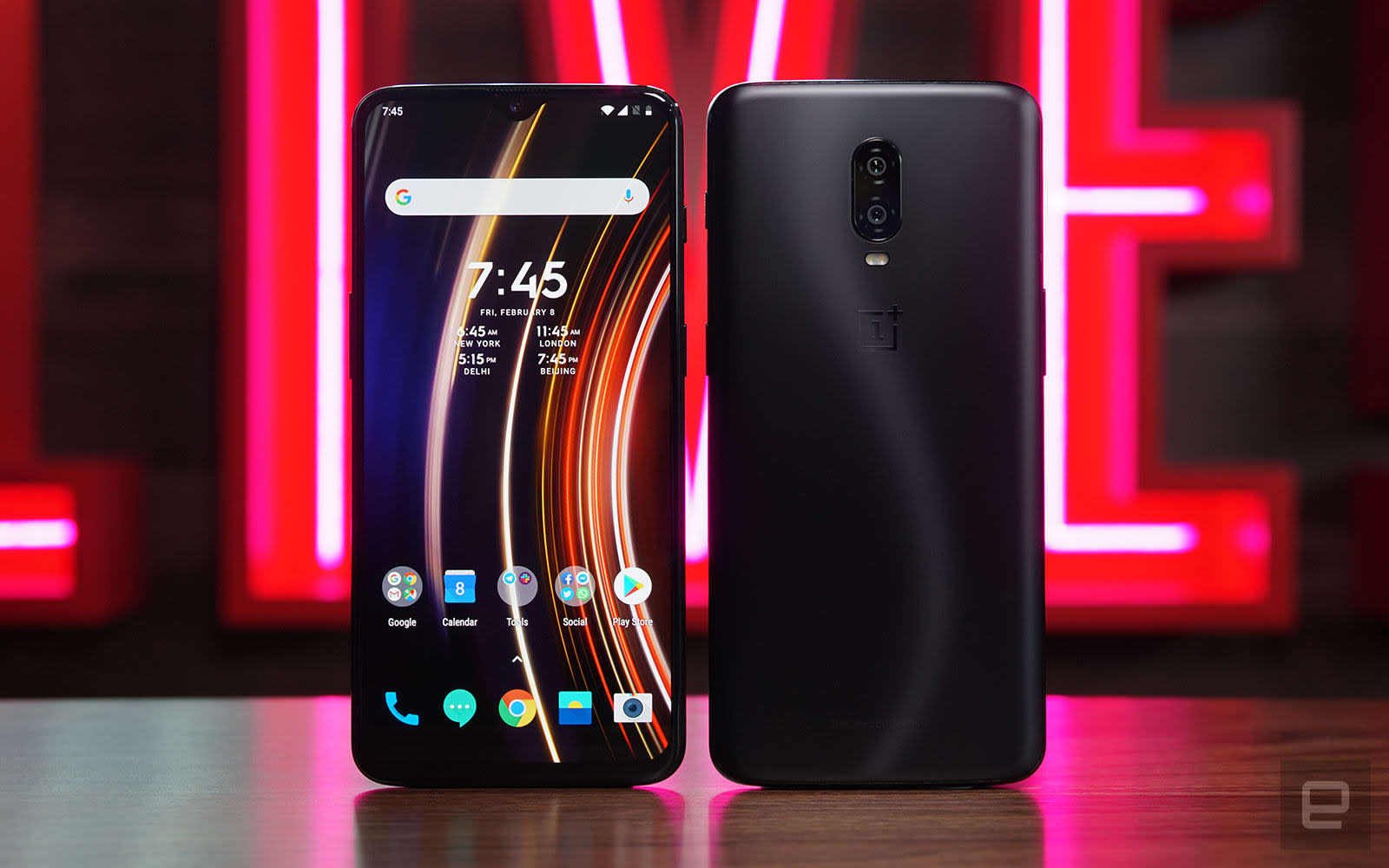 Never missing an opportunity to spread the good word, not only did OnePlus push out the 6T just in time to mark its fifth anniversary but it also released a tantalizing Thunder Purple edition shortly afterward, followed by the limited McLaren Edition with a whopping 10GB of RAM.

It wasn't like the company needed this extra marketing ammo; the 6T brought exotic features, like an in-display fingerprint reader and dewdrop notch to the West. It's also the company's first ever tie-in with a US carrier, available on T-Mobile.

The biggest question was whether the OnePlus 6T would make a fitting successor to my previous main phone, the OnePlus 6. Back in May, I concluded that the 6 was a very compelling package tagged with an attractive price. It's a hard act to follow. I've since switched to the 6T, and while it does offer some upgrades, there are some new trade-offs, too.

Design-wise, both the OnePlus 6T and OnePlus 6 are clearly sibling devices. Save for the different color options, both models feature a similar frame and curved glass back to give that premium feel with a good grip -- especially on the matte versions.

The 6T has a cleaner look, however. The rear fingerprint reader has been replaced by an in-display sensor, while the notch has been reshaped to a dewdrop, as I've already mentioned. And hey, what happened to the headphone jack?

OnePlus CEO Pete Lau told me that his team couldn't find space for a headphone jack due to the larger battery and the in-display fingerprint reader. While I don't mind using my Bluetooth cans with my phone, there have been times when I wanted to plug in other headphones quickly, only to realize that I left my USB-C adapter at home. The disappearance of the headphone jack from smartphones continues, but it's still a let-down from a supposedly geek-friendly brand, especially one with the slogan "never settle." I don't buy Lau's excuse. If Vivo could keep the headphone jack on its dual-screen phone with in-display fingerprint reader plus a reasonable 3,500mAh battery (just 200mAh shy of the 6T's), then why not OnePlus? 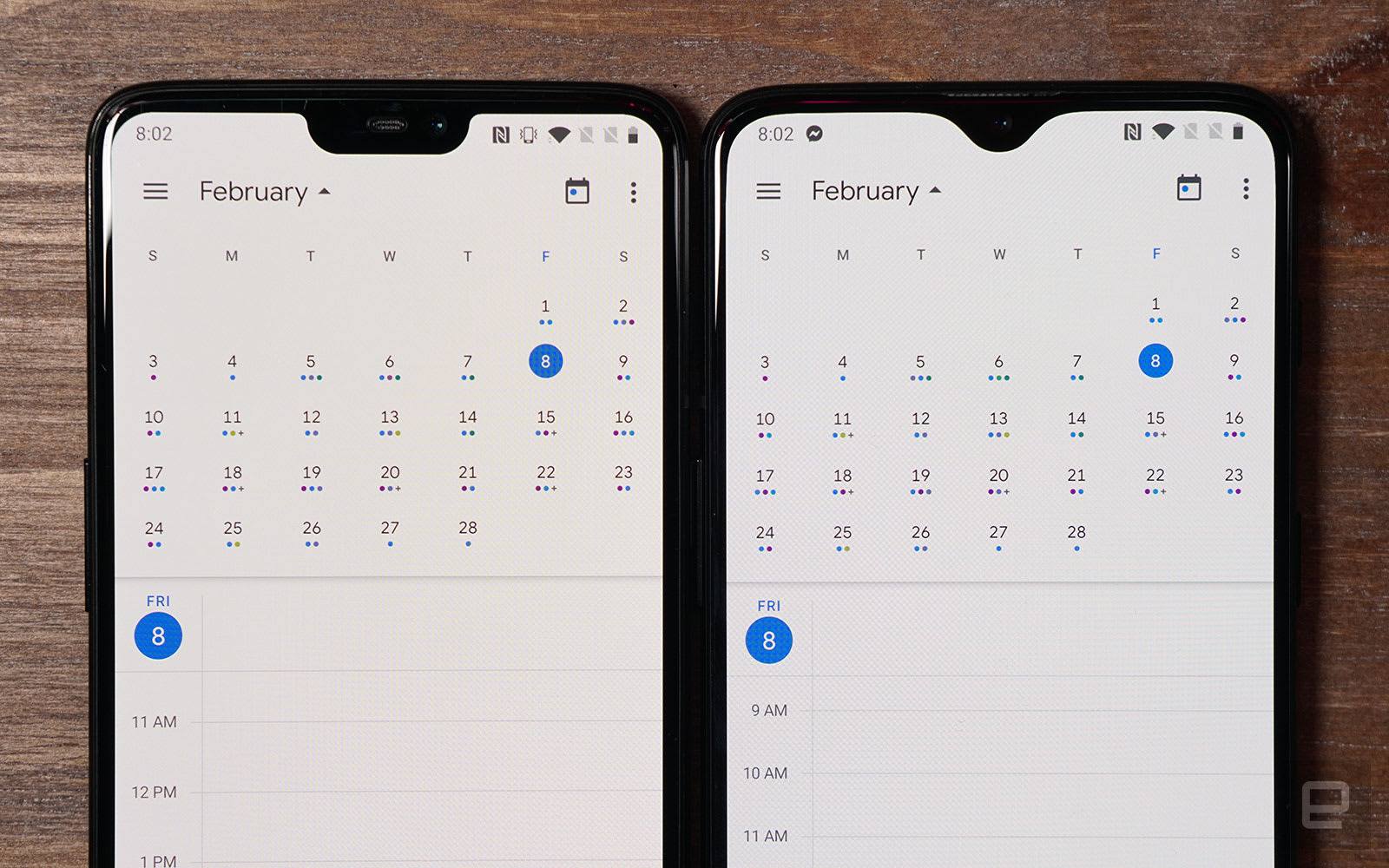 When it comes to notches, the smartphone world has reached a new level of minimalism. Alongside the punch-hole design, you can even go all-screen if you don't mind switching to a pop-up front camera. In the 6T's case, however, it's gone for the dewdrop notch -- and I'm still a sucker for it. It simply looks more natural than punching a hole in the corner of the screen.

This dewdrop is also a vast visual improvement over the wider notch on the OnePlus 6, and so far, I haven't found any trade-offs in user experience -- the new proximity sensor and earpiece work just fine. Both the body and the 1080p AMOLED screen are actually slightly longer -- it wasn't obvious until I placed both phones side by side. Likewise, the negligible bump in weight and thickness were hardly noticeable, which is a plus given the beneficial gain from the larger 3,700mAh battery -- a 400mAh or 12-percent bump from the 6.

The battery easily lasts for roughly 13 hours, depending on how immersed I get in Pokémon Go and Facebook. When depleted, the bundled 20W fast charger gets you from zero to 50 percent in around half an hour, and it does so without significantly heating up the phone. There's still no wireless charging here, but given the impressive charging speed over wire, I'm fine with that. 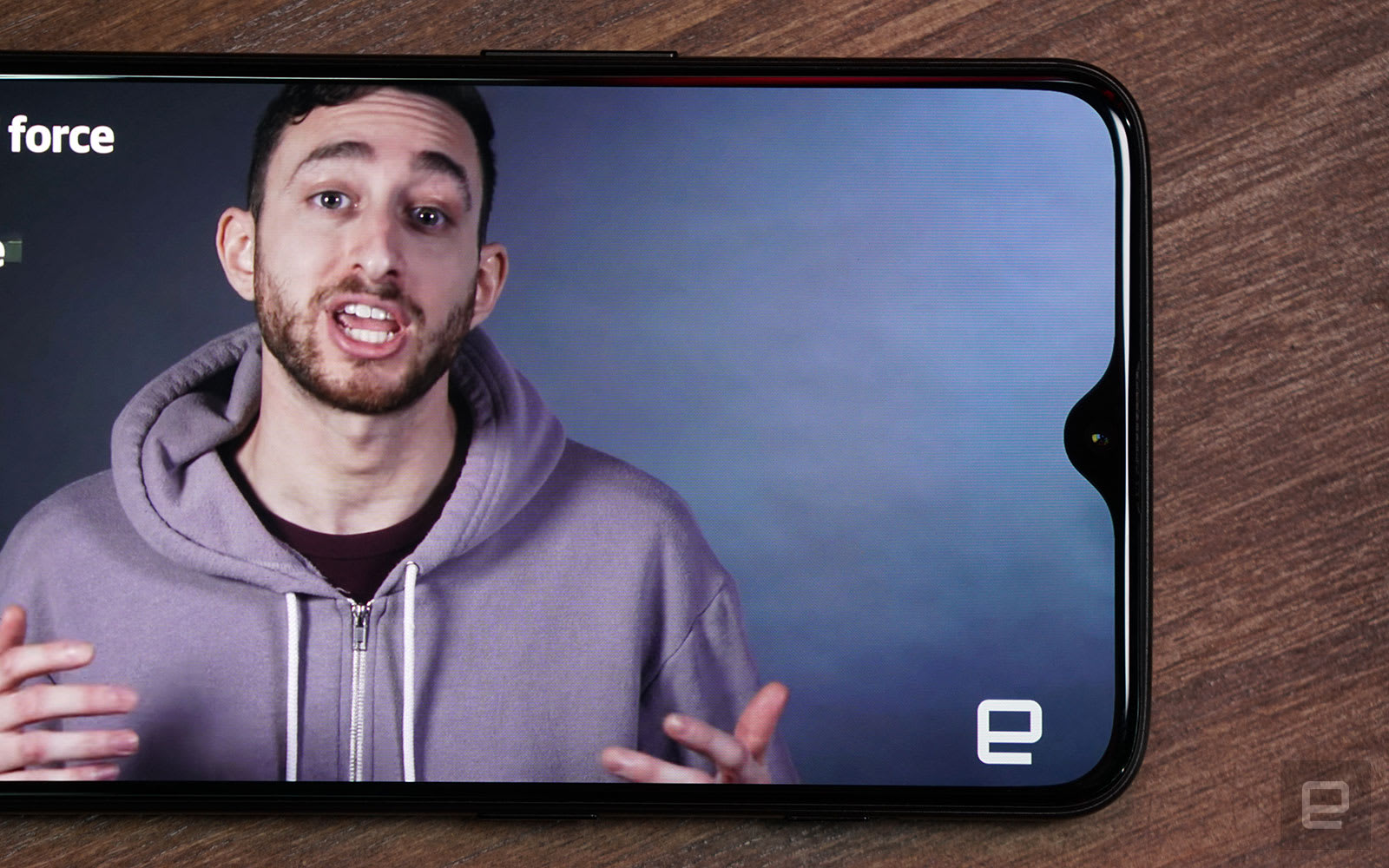 As for the AMOLED screen, you get the usual vibrant colors, which may or may not suit your taste, though there is a DCI-P3 setting for a more natural picture -- that's what I'm using. The dewdrop notch here is achieved by repackaging the phone's proximity sensor and reshaping the earpiece to a slit along the top edge, leaving just the front camera in the middle. This is actually a common setup among Chinese flagship phones, and phone calls sound just fine. On a related note, the bottom-firing speaker is actually a little louder than the one on the 6, and even though we're still stuck with a mono speaker, it sounds great... for what it is.

If I must nitpick, I wish the 6T packed more powerful haptic vibrations (and yes, I've already set it to the strongest setting). I didn't have this problem when I used my 6 naked, but ever since I switched to the 6T -- and slapped on the official nylon bumper case -- I have missed phone calls and ended up apologizing to my wife. Of course, I could simply ditch the case or get used to wearing a smartwatch, but I'd much rather have an upgraded haptic vibration for the sake of versatility, and I'm sure many of you would, too.

The OnePlus 6T shares the same computing specs as its predecessor, (a Qualcomm Snapdragon 845 chipset, 8GB of RAM and 128GB of storage), so it's no surprise that the Android Pie-based OxygenOS runs like a well-oiled engine here. I can swiftly jump between apps while enjoying the smooth scrolling throughout the system, and I have yet to encounter crashes or reboots. 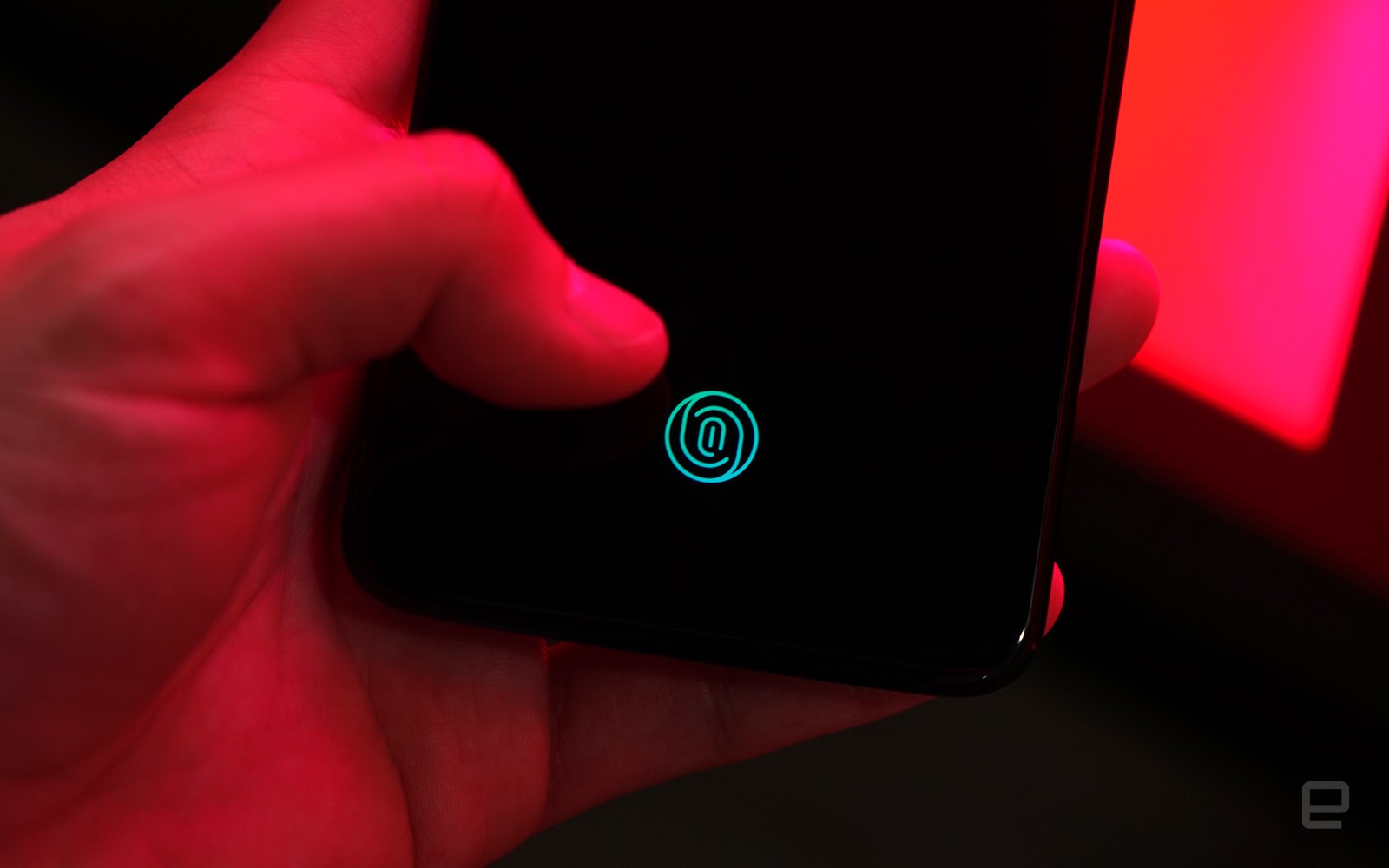 I won't bore you again on how OnePlus rarely lets me down on the software side, especially in performance and UI design. The only notable new software feature on the 6T is Smart Boost, which is a RAM optimization feature to prioritize system resources for frequently used apps. It's hard to do a direct comparison, but I have noticed that apps like Facebook and Twitter loaded a tad faster on my 6T than on my 6.

Many of the slick features that were first introduced on the 6 are still worth praising. I love the navigation gestures which replace the navigation bar at the bottom, which allow me to take full advantage of this longer screen. I've seen similar implementations from Xiaomi, Huawei and Honor, but OnePlus's is by far the most intuitive. Gaming Mode has also been boosted with customizable notification styles for third-party instant-messaging apps -- you can have them show up as small floating windows or just plain white text along the top, so you can play uninterrupted. Unless it's important.

Sadly, despite all the goodness, there's one new feature that disappoints: the in-display fingerprint reader. Coming from the OnePlus 6's conventional rear fingerprint sensor, there's no denying that the 6T's supposedly more advanced offering is slower.

The new reader is fundamentally flawed: It doesn't work well, if at all, under bright daylight or in total darkness. Having tried the feature on other smartphones, with similar results, I think it's early days for in-display optical fingerprint readers.

Luckily, the camera performance here makes up for the fingerprint reader blunder. The 6T inherited the same set of great cameras from the 6, and while these come with new algorithms for supposedly better shots, I haven't spotted much of a difference. What is obvious is the new AI software that kicks in whenever the camera detected certain scenes -- mainly food and greenery -- to automatically adjust the contrast and saturation. The results tended to come out nicely, without too much exaggeration.

The main dual cameras -- 16MP main and 20MP secondary -- continue to produce sharp and generally faithful stills in well-lit environments, but what impressed me most was how much detail the 6T managed to preserve during both day and night. When I put the 6T up against the photography-centric Huawei Mate 20 Pro, I was surprised by how the former excelled in some aspects. This was most obvious whenever greenery was involved: The Mate 20 Pro somehow managed to make trees look duller while, ironically, suffering from a green bias across other images. 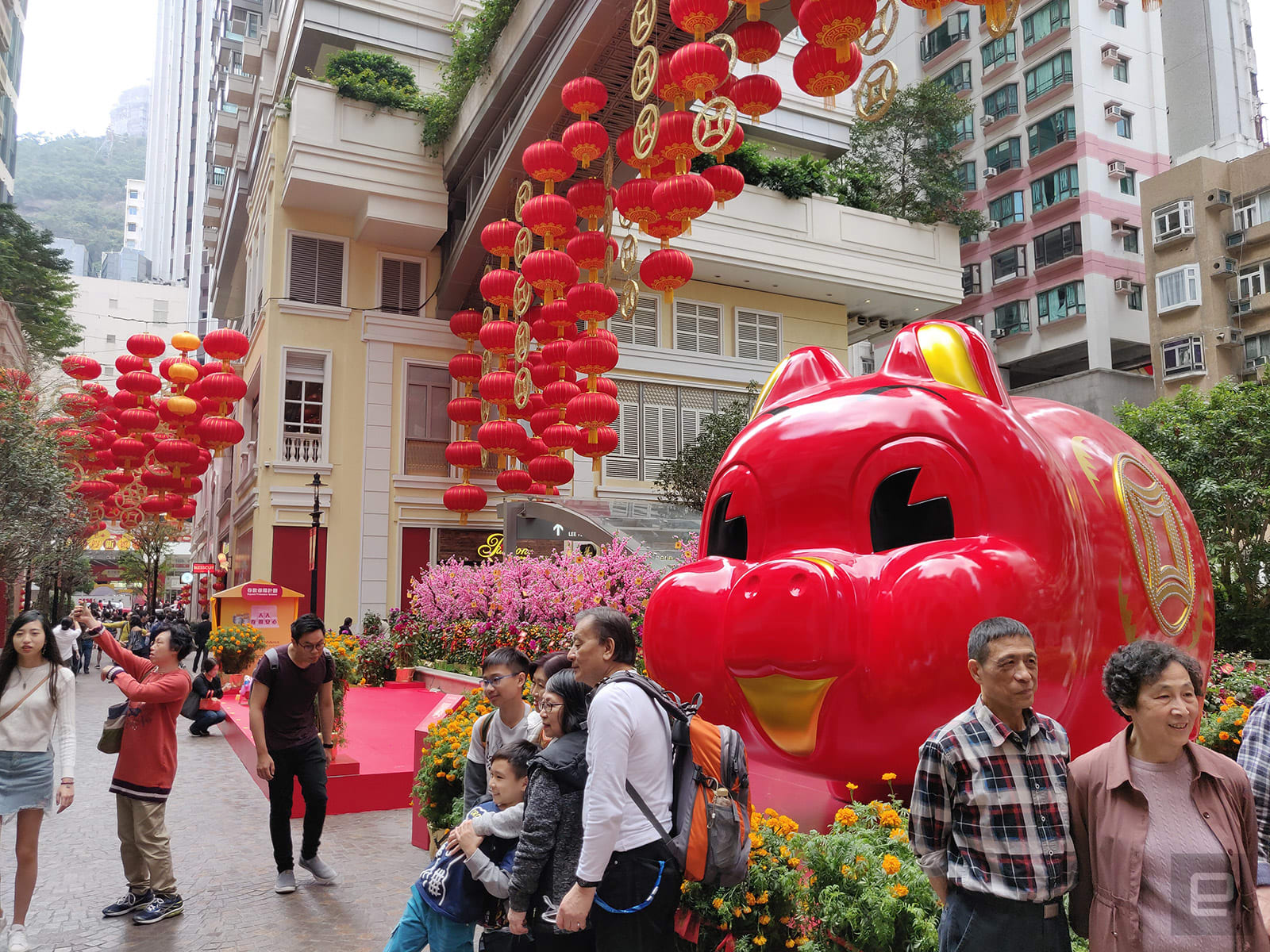 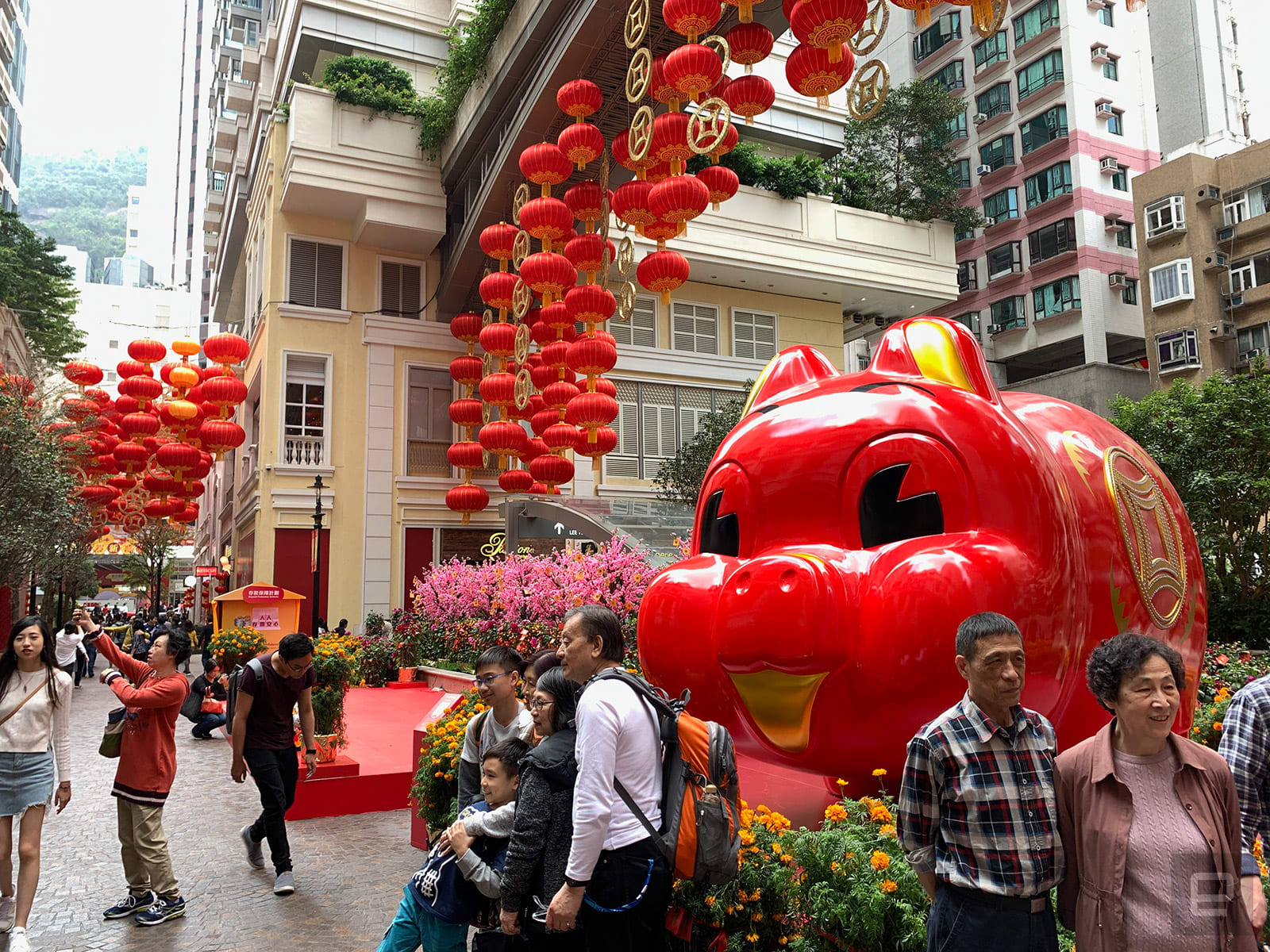 On a similar note, my 6T day time shots tend to have a closer resemblance to reality than my iPhone XS Max photos, and the former also preserves more details partly thanks to its higher camera resolution. The iPhone stills also tend to have a slightly cooler white balance, though they do pick up reds far more accurately -- an obvious advantage when it comes to taking photos during Chinese New Year. 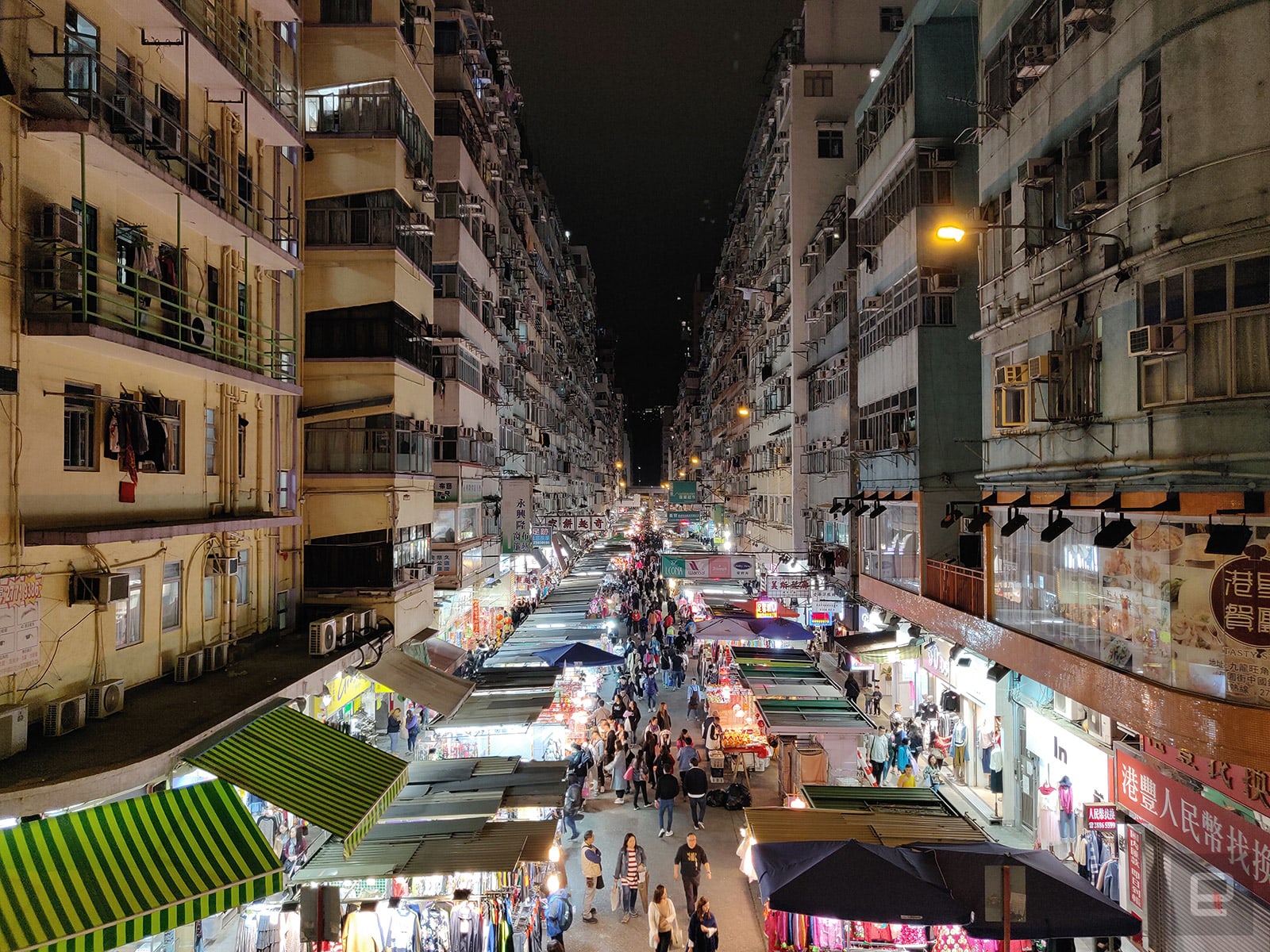 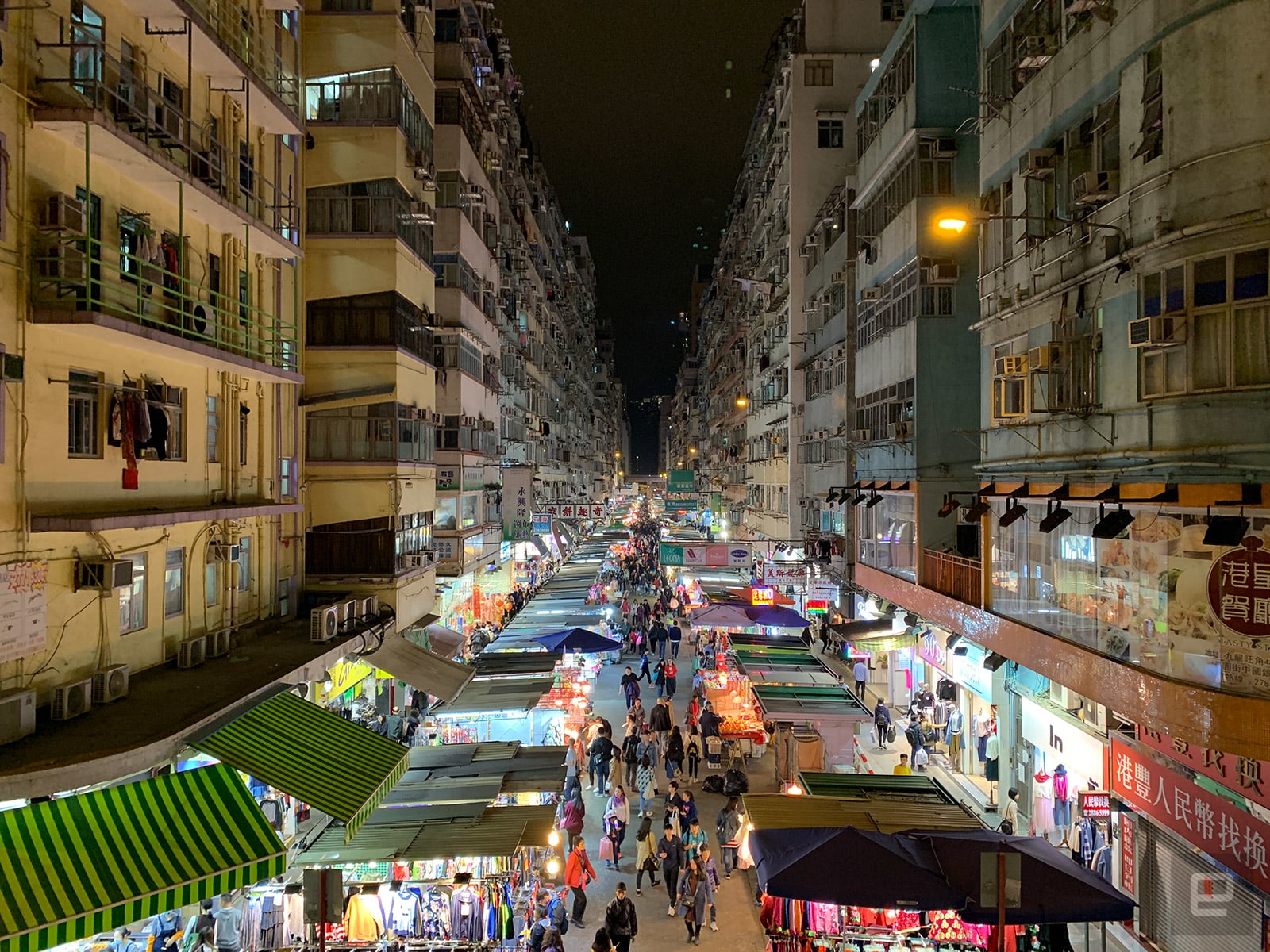 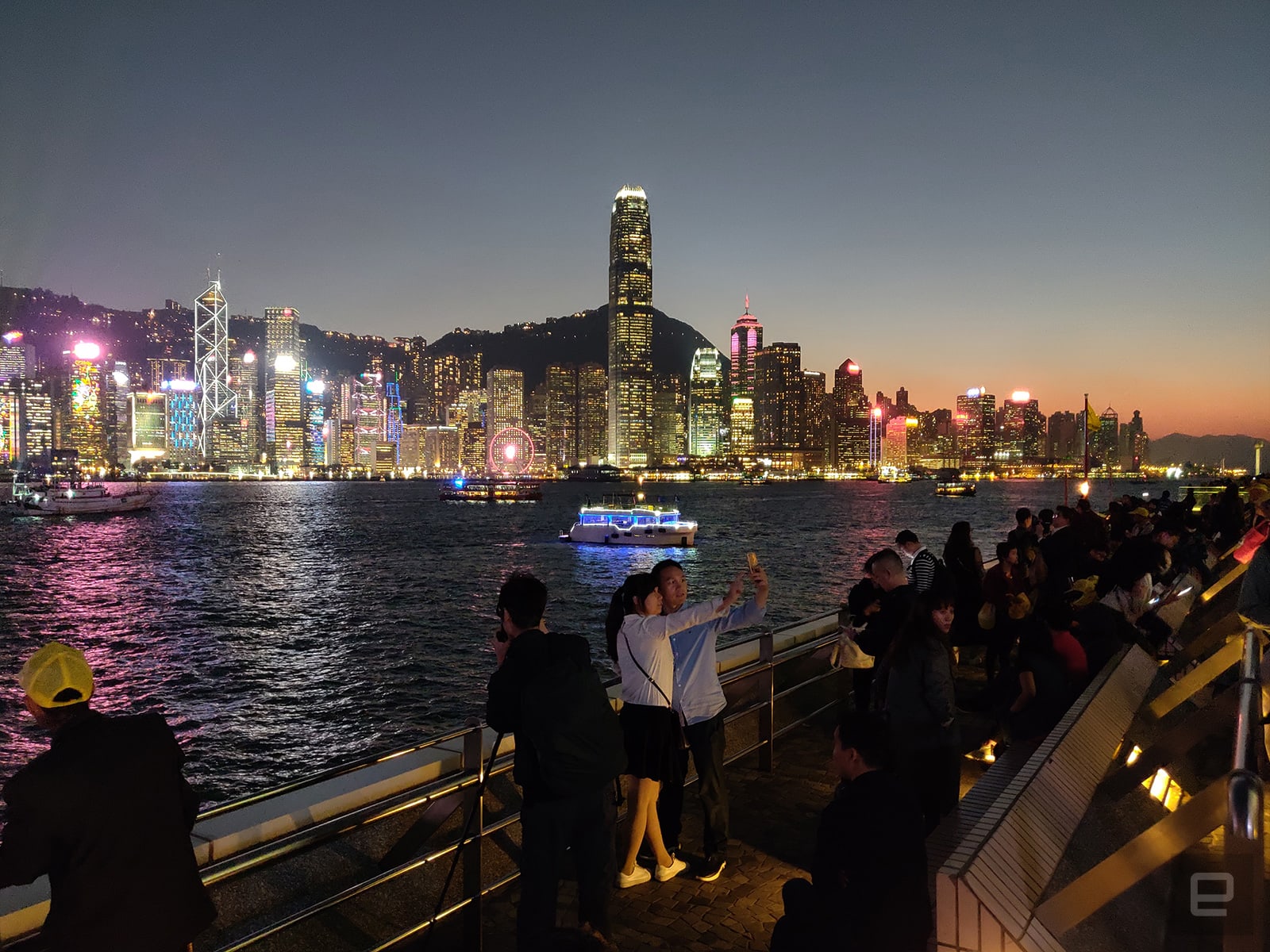 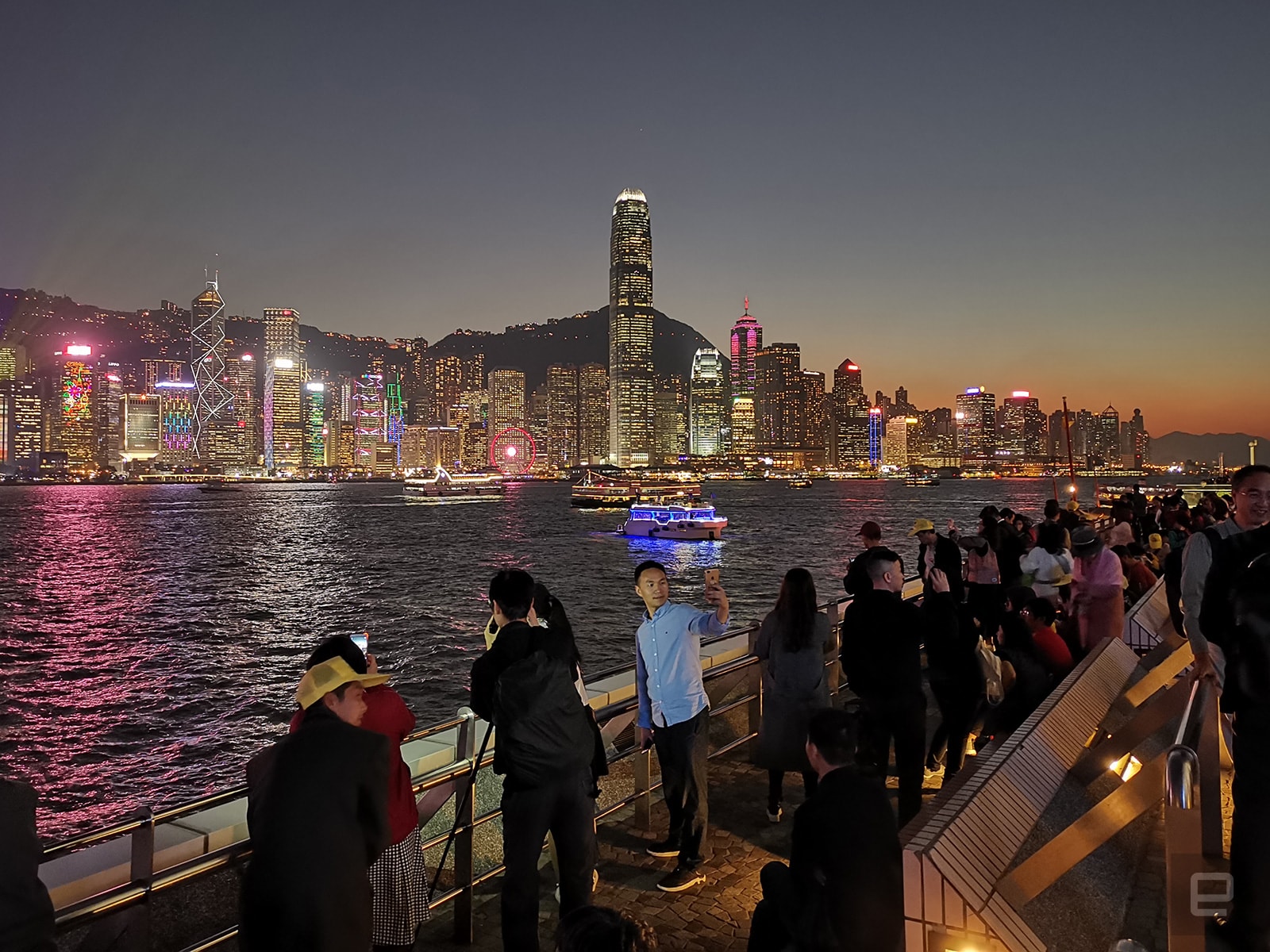 The 6T even amazed me with its night-time harbor shots in Hong Kong, leaving significantly more fine lines intact on the skyscrapers far away. The Mate 20 Pro, on the other hand, clearly suffered from both artificial sharpening as well as drop in detail -- as is the case even in well-lit shots.

But that's not to say we have a clear winner here. Despite the Mate 20 Pro's lower 10-megapixel resolution, its shots picked up more detail in dark areas and even accurately captured the fluorescent lights that were left blown out in the 6T's shots. The iPhone XS Max also beat the 6T in low-light capture speed and noise level, so moving cars and pedestrians turned out much better in its night-time shots. 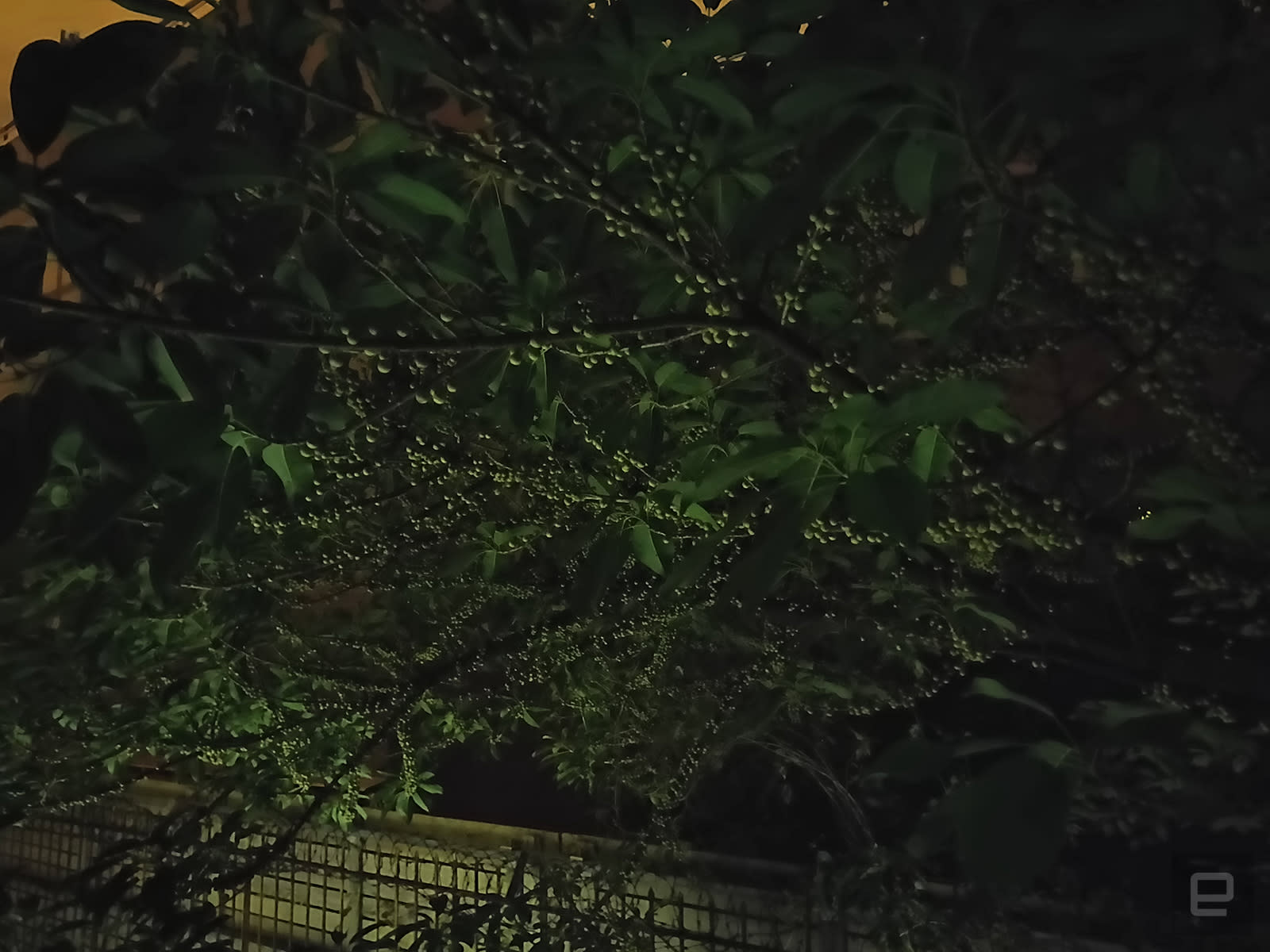 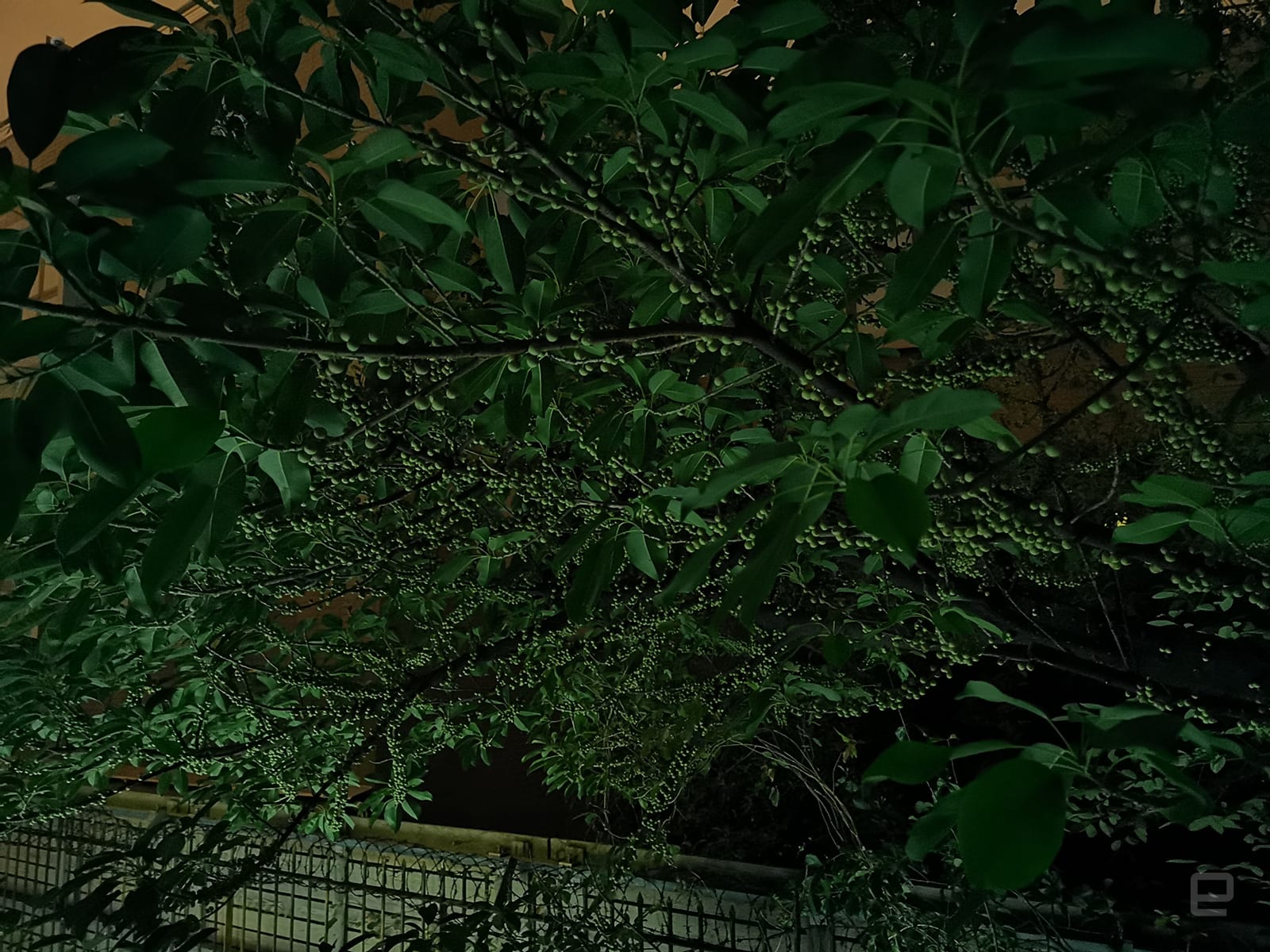 Then there's the battle of night modes, and it's safe to say that Huawei's AI-boosted long-exposure mode still easily beats OnePlus's new Nightscape mode in pitch-black scenarios. While the latter does manage to boost brightness and color accuracy, it fails to match the level of detail and sharpness offered by the pricier Huawei device. To date, only the Google Pixel series' Night Sight optimization poses a real threat to Huawei's long exposure tech.

4K video recording at 60 fps continues to be supported by great electronic stabilization, giving me silky smooth, panning motion even when I'm shooting with one hand while entertaining my dog with the other. On the other side, the 16-megapixel selfie camera in the dewdrop notch served me well for my selfie addiction. Though likely because there's only electronic image stabilization here, this camera was more susceptible to shaky hands when operating indoor. As a result, I've developed a habit of taking multiple shots for every selfie, just in case, but I'd much rather have a more reliable front camera. 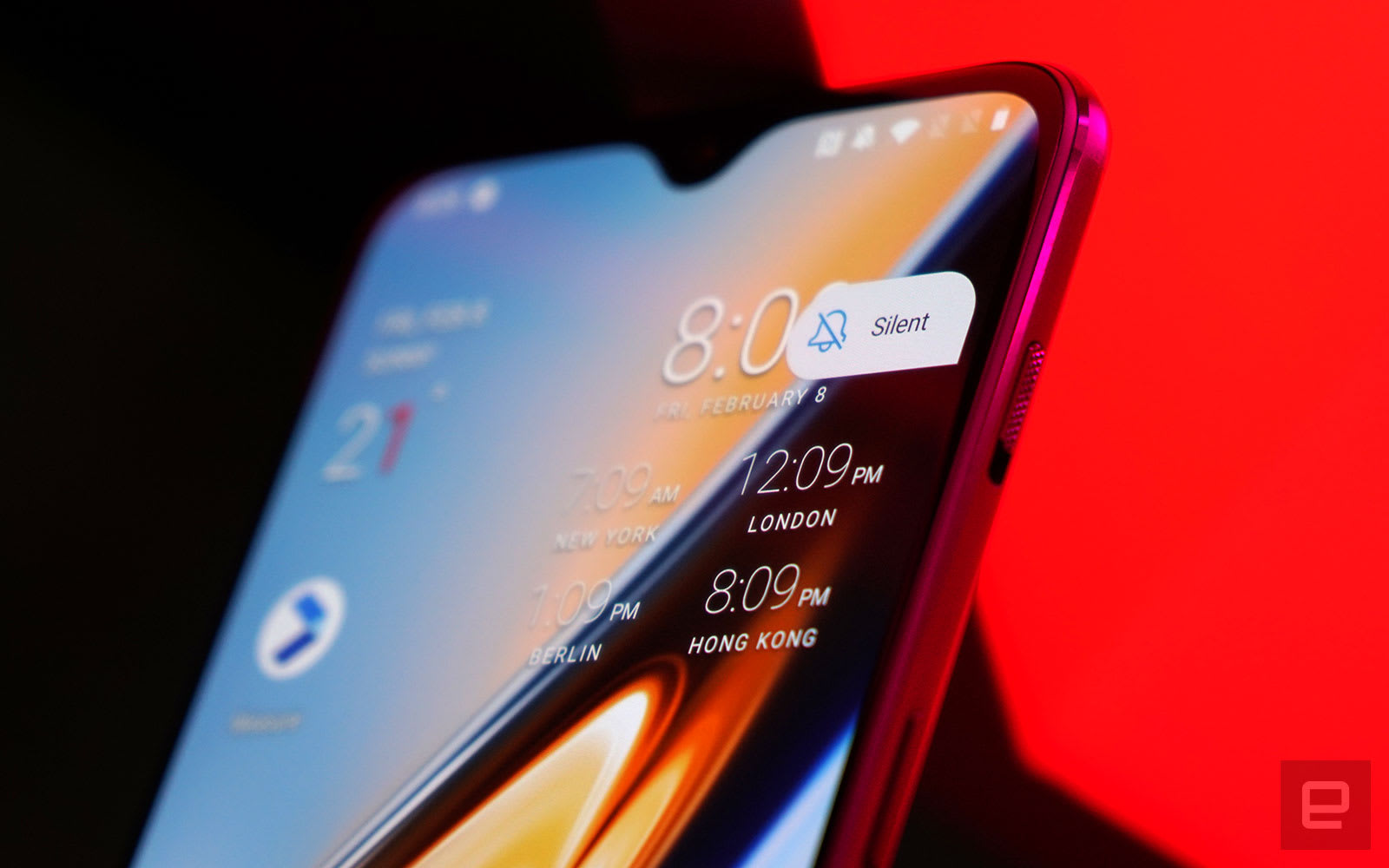 OnePlus continues to stand out by offering reliable performance in good-looking packages. The friendly price tags help a lot, too, obviously. But I'd be hesitant to call the 6T a clear improvement on its almost perfect predecessor. While the dewdrop notch is personally my favorite all-screen execution at the moment (more so than the punch-hole alternatives), I don't share the same excitement for this sluggish fingerprint reader. Had this been responsive, I would have been more forgiving on the removal of the headphone jack.

On the bright side, I continue to be amazed by OnePlus's photography achievements. The 6T's cameras perform almost just as well -- or better -- than those on phones costing significantly more. There's always room for improvement in low-light shots and dynamic range, but overall, I still prefer the 6T's more faithful reproduction. Likewise, the front camera could use a speed boost to avoid shaky selfies.

Despite its flaws, the 6T is a no-brainer for those seeking a stylish flagship Android phone, especially if you have budget in mind. It's also a much better deal than the latest flagship iPhones. But is it worth upgrading from a OnePlus 6 to a 6T? Unless you're eyeing the McLaren edition for its unique looks and 10GB RAM, you might want to see what OnePlus has planned for later this year.