HTC's Exodus smartphone is about much more than Bitcoin

'A blockchain phone? But why?'

That was my first reaction when I read about the HTC Exodus last year. It felt like a wild, foolish bet from a company that's struggling for sales and relevancy in the mobile space.

But then I spoke with Phil Chen, the company's "Decentralized Chief Officer." I'm still skeptical of the product's commercial viability, but I have a better idea of what the Taiwanese manufacturer is trying to achieve. It might sound silly and ill-conceived, but HTC genuinely wants to improve society with this phone. 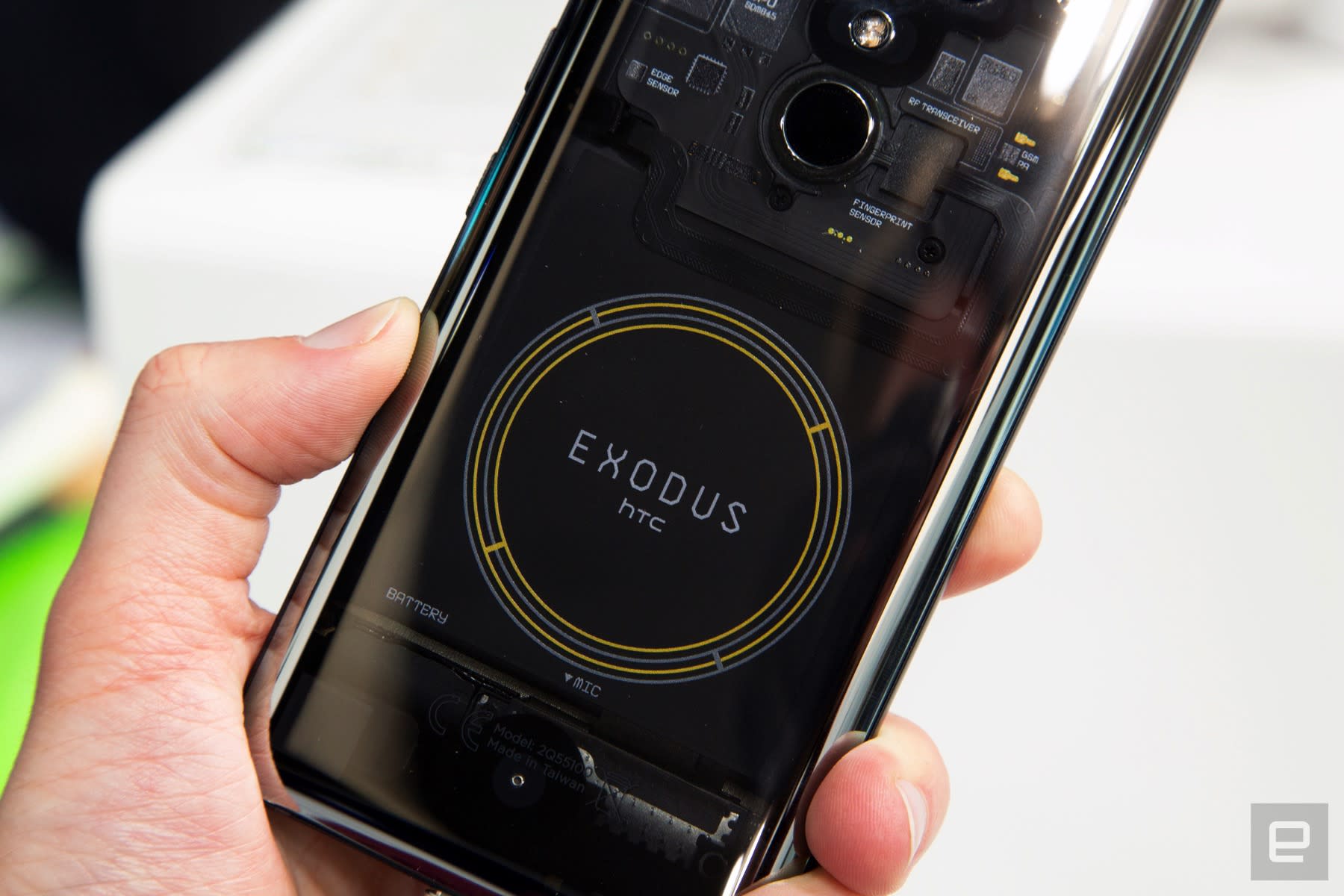 Chen joined HTC in September 2007. He was a product manager when the company launched the HTC Dream -- the first commercial Android phone -- 12 months later. During our interview at Mobile World Congress, he proudly pulled one out of his pocket. "What happened was... this movement became hijacked into owning people's data," he explained. "But we had no part in that."

That hijacking, I assume, refers to Google and every other company that has built a business on collecting and harvesting customer data.

Chen left HTC in 2014 and created his own venture capital firm called Presence. He then joined "a much bigger fund" called Horizons Ventures which was investing in early blockchain companies such as Blockstream. To understand the technology and which companies were offering more than digital snake oil, he watched "hundreds of hours" of Andreas Antonopoulos, a popular Bitcoin expert on YouTube.

"They are the biggest brothers of all time."

Horizons had invested in DeepMind and Siri prior to Chen's hiring. The fund was performing well but he became "quite cynical" as the company effectively fueled Silicon Valley giants such as Apple and Google. Chen soon realized that it was the data, rather than the algorithms and underlying technology, that separated these behemoths from smaller AI startups. "They are the biggest brothers of all time," Chen told Engadget, "in this whole surveillance capitalism."

Autonomous driving, robotics, artificial intelligence -- these giants were moving quickly to ensure they were at the forefront of each new technology. The only ones they hadn't touched yet were blockchain and emerging cryptocurrencies. 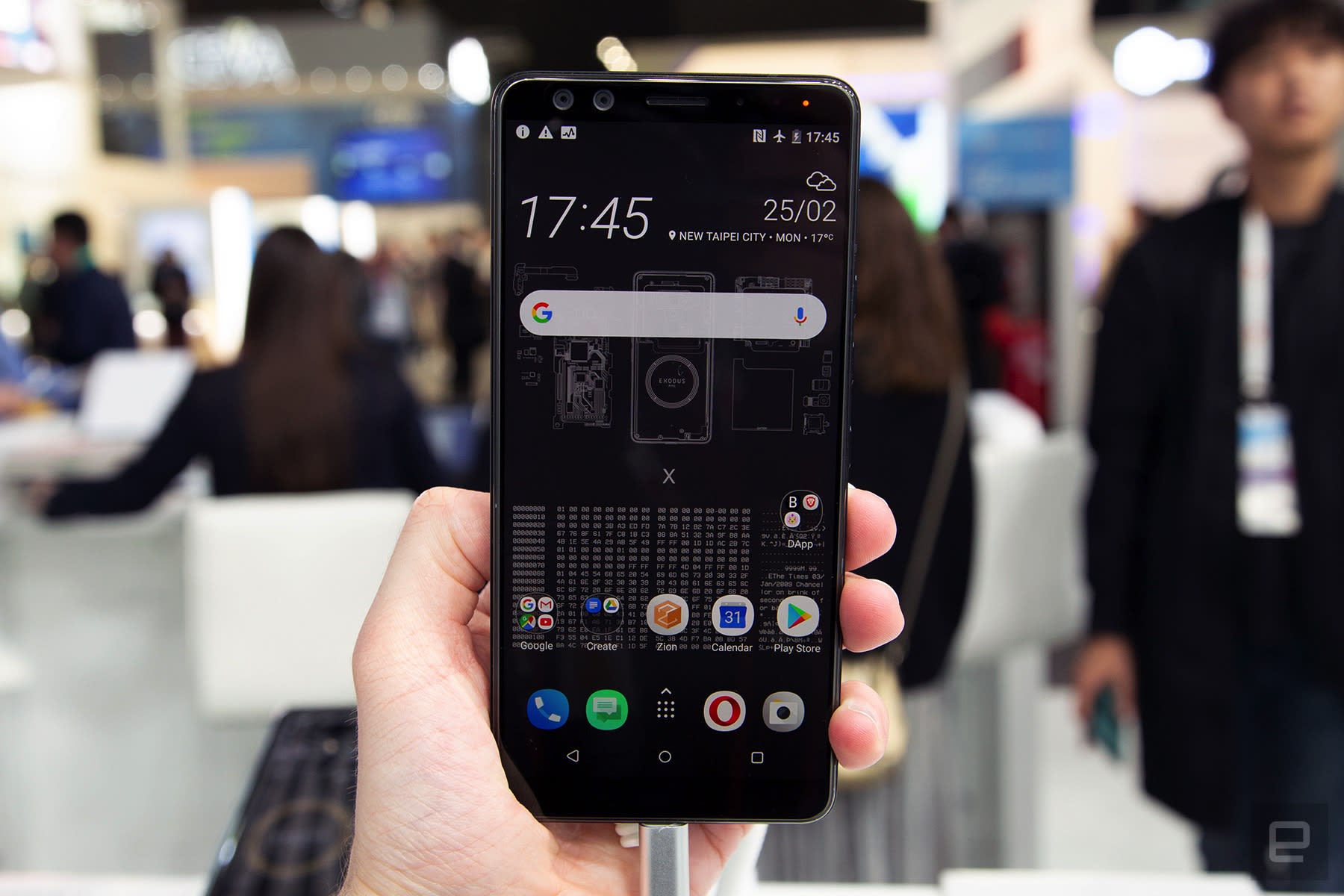 Chen wanted people to have more control over their data and online identity. When you sign into a service like Facebook, one of its servers has to authenticate you, he explained. But what if you, as a consumer and user of the internet, were the one authenticating services and servers? "[I'm] trying to flip that on its head," he said." "Because if you own the private keys and you own your digital identity, you as a client can authenticate and deactivate servers." he said. "So instead of our servers authenticating you, you own your private keys to authenticate."

Toward the end of 2017, Chen had an idea: a phone that could hold a person's private keys and, by extension, give them the power to use and disable services this way.

He reached out to HTC and persuaded some high-level executives to assemble a small team and start building prototypes. "I seeded [the idea]," he said. "My intention was to be an advisor."

"My intention was to be an advisor."

Chen was comfortable working in venture capital. HTC, meanwhile, was struggling to find its place beyond bleeding-edge virtual reality hardware. But he soon realized that it was critical that HTC followed through on the project. There were smaller blockchain phone projects but they "missed the point" or didn't have the resources to make an impact on the mobile market. Most of the bigger players, meanwhile, would never try it because the entire concept went against their business model of harvesting user data.

HTC was unique. The company was in bad shape and, therefore, willing to take risks. But it also had the talent, experience and supply chain knowhow to operate as a giant. "It still had its roots in being able to build incredible hardware," he said. "And so I saw that as a great foundation for me to build a great software stack on top of that." 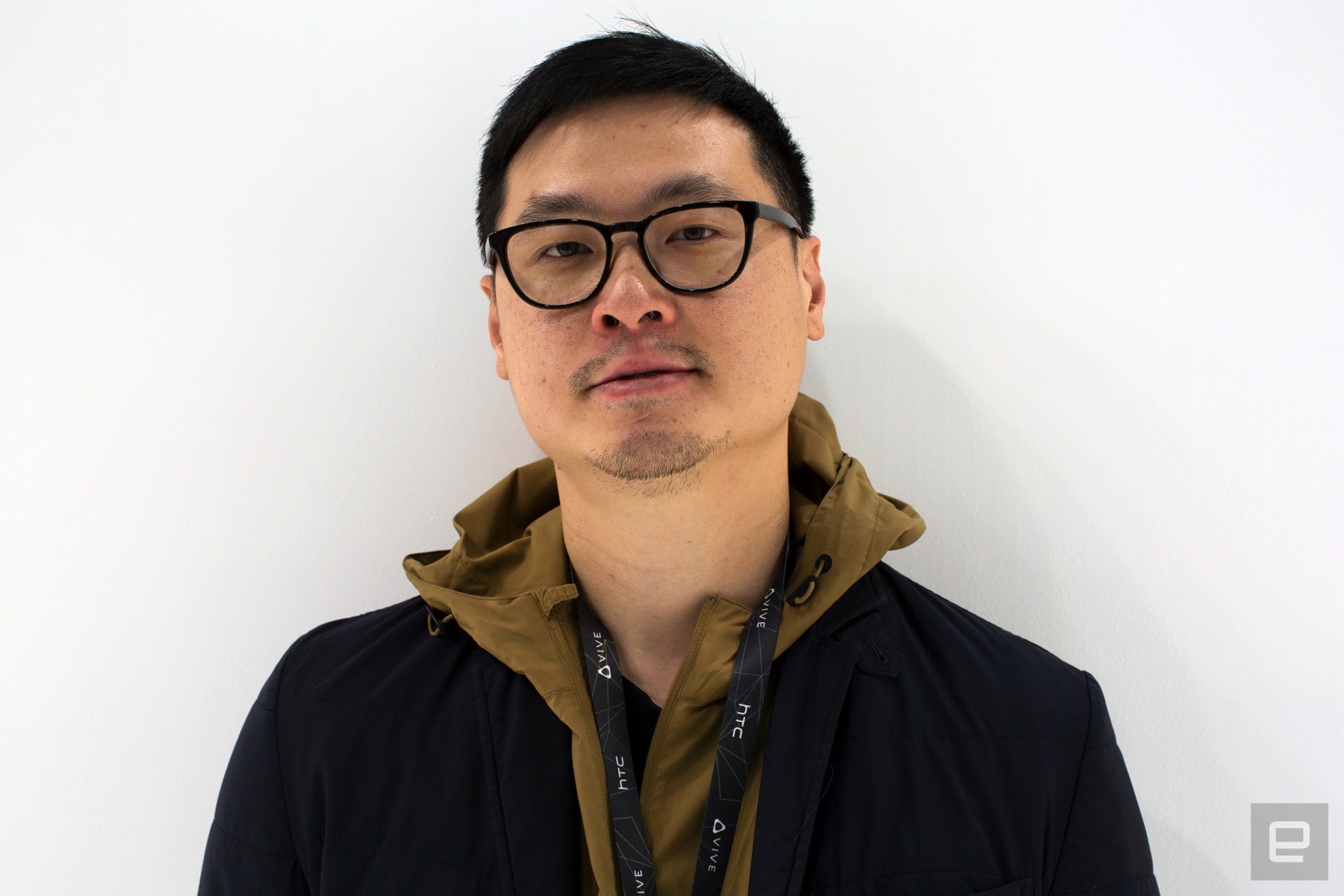 The HTC Exodus is being marketed as a phone for cryptocurrency enthusiasts. It has a "secure enclave" that's separate from the operating system and can store private keys.

But that's only part of it.

Chen says the phone is actually a "trojan horse" for "re-architecting the internet." Once consumers are familiar with its cryptocurrency capabilities, they'll be open to the concept of securely holding and controlling their personal data.

At first, Chen had a "moonshot idea" that would turn each phone into a blockchain node. "Because today, there's what, about 15,000 nodes for Bitcoin, maybe 17,000 nodes for Ethereum? And I believed, and I still believe this but we haven't solved this problem yet, that one day we can build a blockchain that empowers one person to be a node per phone," he said. That concept, though, would require each phone to do some serious computation. It's technically possible but realistically impractical with current mobile hardware.

Persuading HTC to follow through and actually release the Exodus wasn't simple. The conversation was, "Hey, this is where the world is heading to. It's heading towards pure big brother tyranny,'" Chen said.

"if you believe data is the new oil, these companies that are top 10 right now, they'll be top 10 for the next hundred years."

If the industry doesn't take action now, the top seven or eight companies will rule the world for a long, long time. "If you think data is the new digital oil," Chen said, "the oil companies dominated the industry for a hundred years, right? And if you believe data is the new oil, these companies that are top 10 right now, they'll be top 10 for the next hundred years. And they'll be even more powerful and more controlling than the oil companies of the past."

For HTC, then, a so-called "decentralized internet" is crucial for its survival. If the company ignores the problem and pumps out beautiful but otherwise typical Android phones, it will sleepwalk into a world where its destiny is controlled by other, larger and more powerful companies. 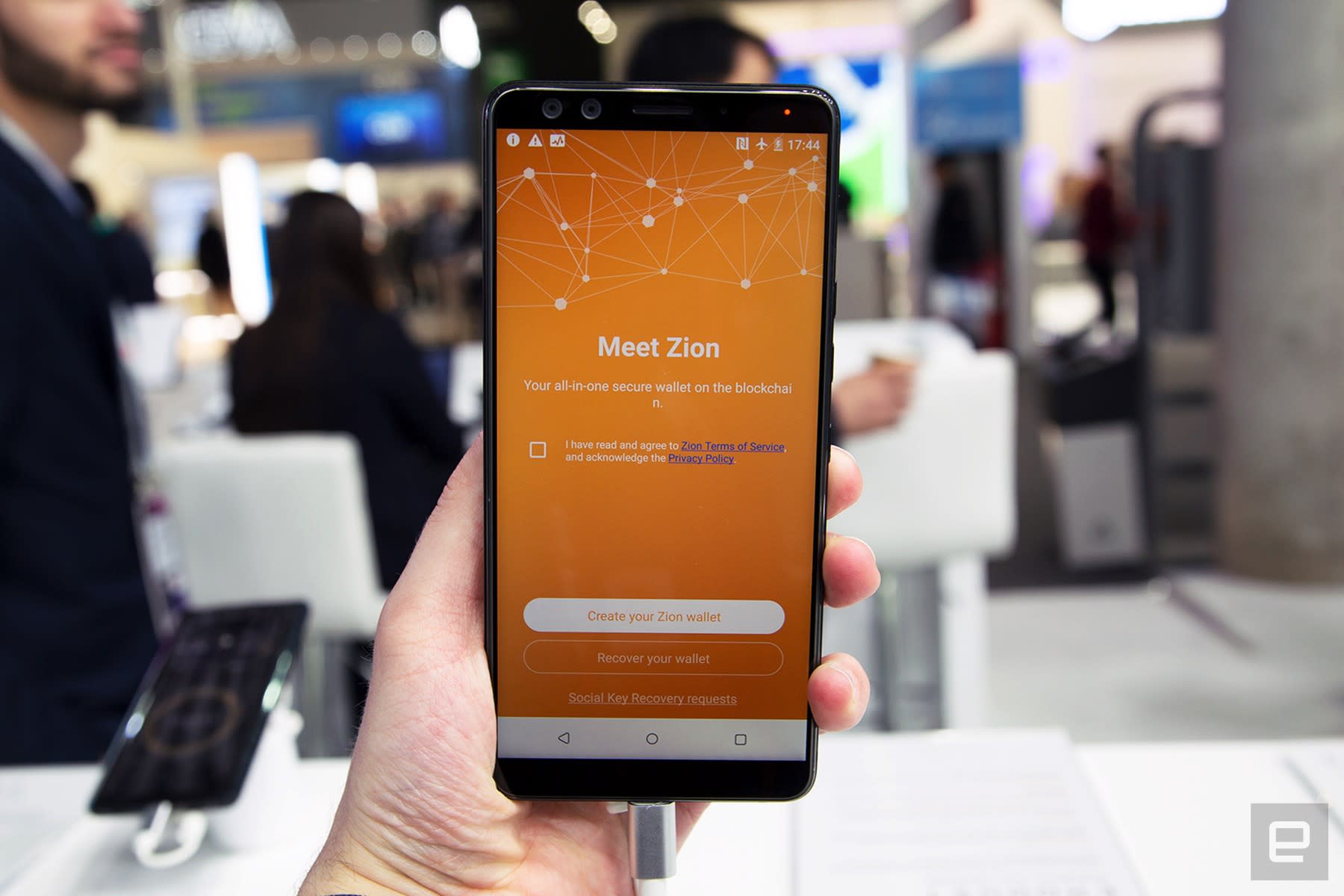 Persuading customers to adopt this "Web 3.0" thinking, though, will be tough. HTC is trying to accelerate the process through partnerships with Opera, a browser that offers a built-in cryptocurrency wallet, and decentralized "DApps." At Mobile World Congress, the company announced that the Exodus 1 now works with Blockfolio, a cryptocurrency portfolio tracker, Nodle, a controller for connected "Internet of Things" and Numbers, a service that gives you complete control over how your health data is sold to other companies.

Cryptocurrency enthusiasts are wary, though. What happens if you lose the phone? And won't its transparent cover draw attention to the fact that you have private keys on your phone? Both are valid concerns. And in short, it's on you to keep the device safe. HTC doesn't keep a copy of your keys -- that would defeat the whole purpose of the phone -- but offers a recovery process that involves splitting your crypto wallet amongst three to five trusted people.

It's true that someone could theoretically rob you and find a way to break into the secure enclave. Chen believes that scenario is unlikely, however. A hacker, he argues, is more likely to spend his time and energy targeting a centralized server that hosts a million private keys. "We're fundamentally more secure by the way it's architected," he said. "That's not saying that, you know, we're completely bulletproof. But by design [the system] is more distributed. One hack, one key." 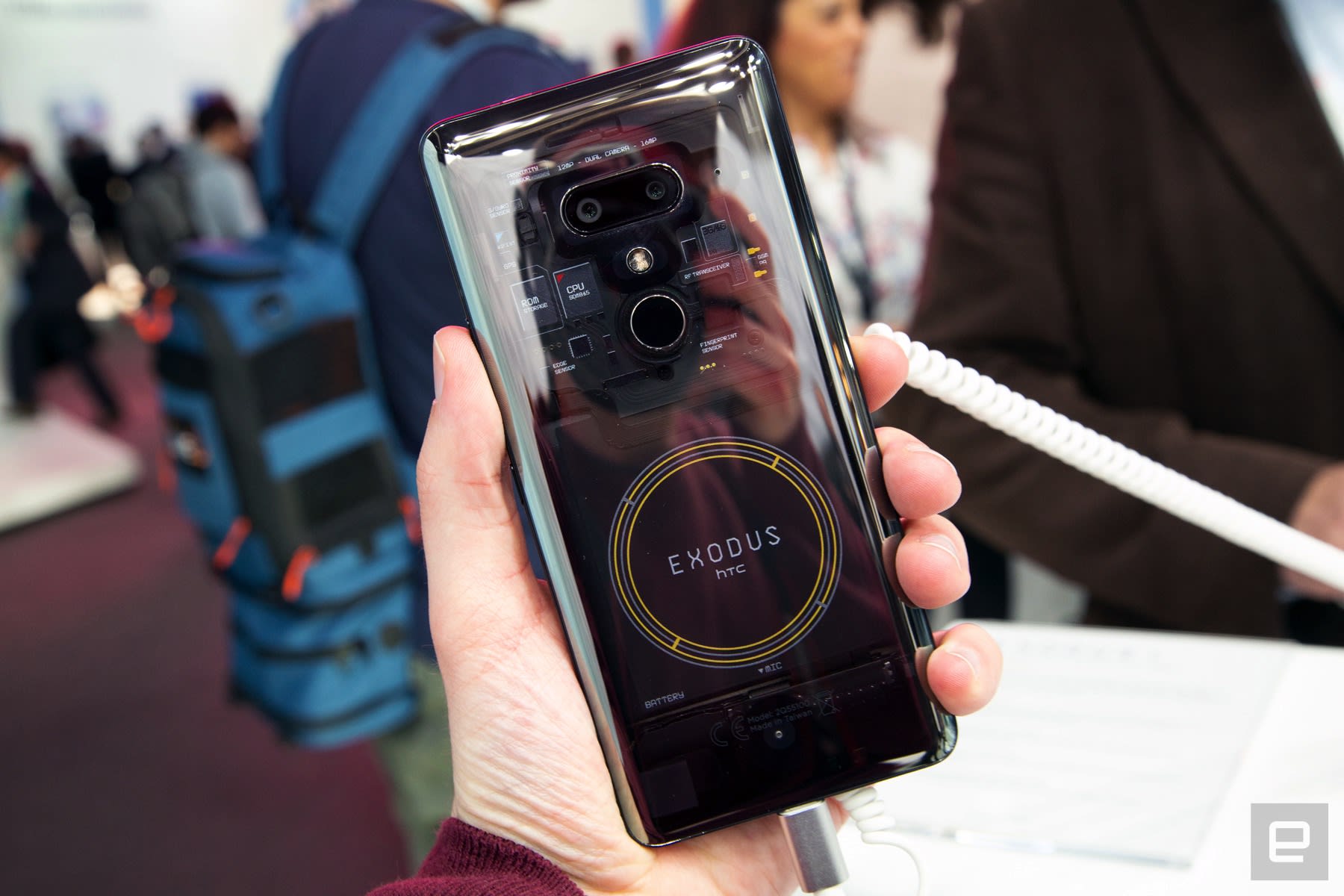 I understand Chen's desire to "decentralize" the internet. Using cryptocurrency as the gateway drug for this digital revolution seems risky, though. Public interest in so-called "digital gold" has mellowed since the the Bitcoin bubble of late 2017. There's still a passionate, growing community around blockchain, but it's fallen out of the mainstream press and back into a niche movement.

Are there enough people that both own cryptocurrency and want to own an Exodus smartphone? I'm not sure.

"It really needs to be a people's movement."

It's also unclear how many citizens feel the same way as Chen and want to move over to this unshackled version of digital citizenship. There's a small, but growing backlash toward large technology companies like Amazon. But will those people take the next step and start owning private keys? "In my mind it absolutely will happen," he said, "but obviously if it's us [HTC] alone it's not gonna happen. We need to partner with people coming into the industry, as well as the Bitcoin community, the Ethereum community and the "Web 3.0" community. It really needs to be a people's movement."

The question, then, is whether HTC will still be in business if and when its version of the internet materializes.