The Vivo APEX 2019 is a preview of what's to come in the smartphone world.

Picture this: you're holding two glossy all-glass concept phones for a photo, then one slips off and shatters another unit on the table. The room goes quiet. Everyone looks on in awe. You are left red-faced not because you broke a phone, but because you broke one of the few rare units in existence. That was exactly what happened to me at yesterday's Vivo APEX event in Hong Kong.

To jog your memory, APEX is Vivo's line of concept phones, with the edition that was announced earlier this year being its second model. The pitch? It was some crazy all-glass "Super Unibody" sans buttons nor ports, and boy did it look slick in the press shots. It wasn't until yesterday -- weeks after MWC wrapped -- when I finally got to hold a unit in my hands. Just as I was starting to appreciate the premium feel of this rare device, though, my unit slipped off my hand and destroyed another APEX in a display case, an accident for which I apologized profusely.

To be fair, most glass phones would be unlikely to survive the impact of another phone landing on a corner. And yet, the fallen APEX remained intact, which suggests the "G2 curved-surface waterdrop glass" does serve its purpose. Specifically, the glass thickens around the phone's bezel, hence the waterdrop shape in a cross-section. Still, such protection comes at a cost: it requires a complex process combining hot-bending techniques and CNC glass shaping methods. 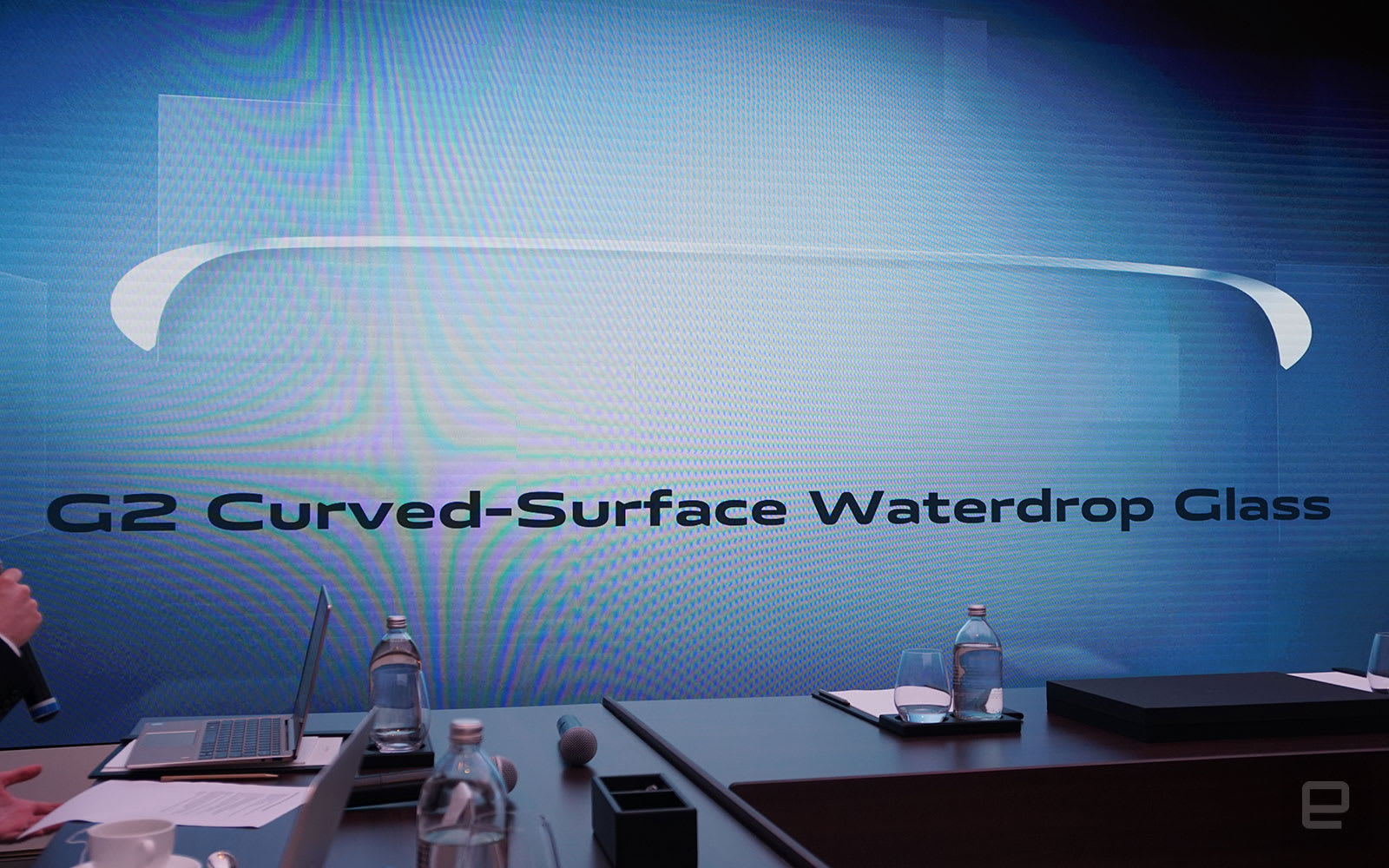 Seemingly unfazed by the damaged prototype, product manager Ding Guanli told Engadget that there's a good chance that Vivo will mass-produce an all-glass device like this. Given the unfortunate incident, Ding assured me that the mass-produced version will somehow be more resilient to external impact. Fragility aside, the APEX still serves its purpose of showcasing Vivo's main areas of interest when it comes to future mobile tech. Or as the exec put it, "we want to do something that hasn't been done before."

This Android Pie device has a Qualcomm Snapdragon 855 chipset, 5G radio, 12GB of RAM, 512GB of storage space and 12MP/13MP dual rear cameras, but none of that matters. It's more about the list of "firsts" here, including the lack of ports and physical buttons; then in-display dual-fingerprint reader covering the entire FullView screen; the "MagPort" connector on the back to replace the conventional USB port; and "Body SoundCasting Technology" taking the place of conventional speakers. 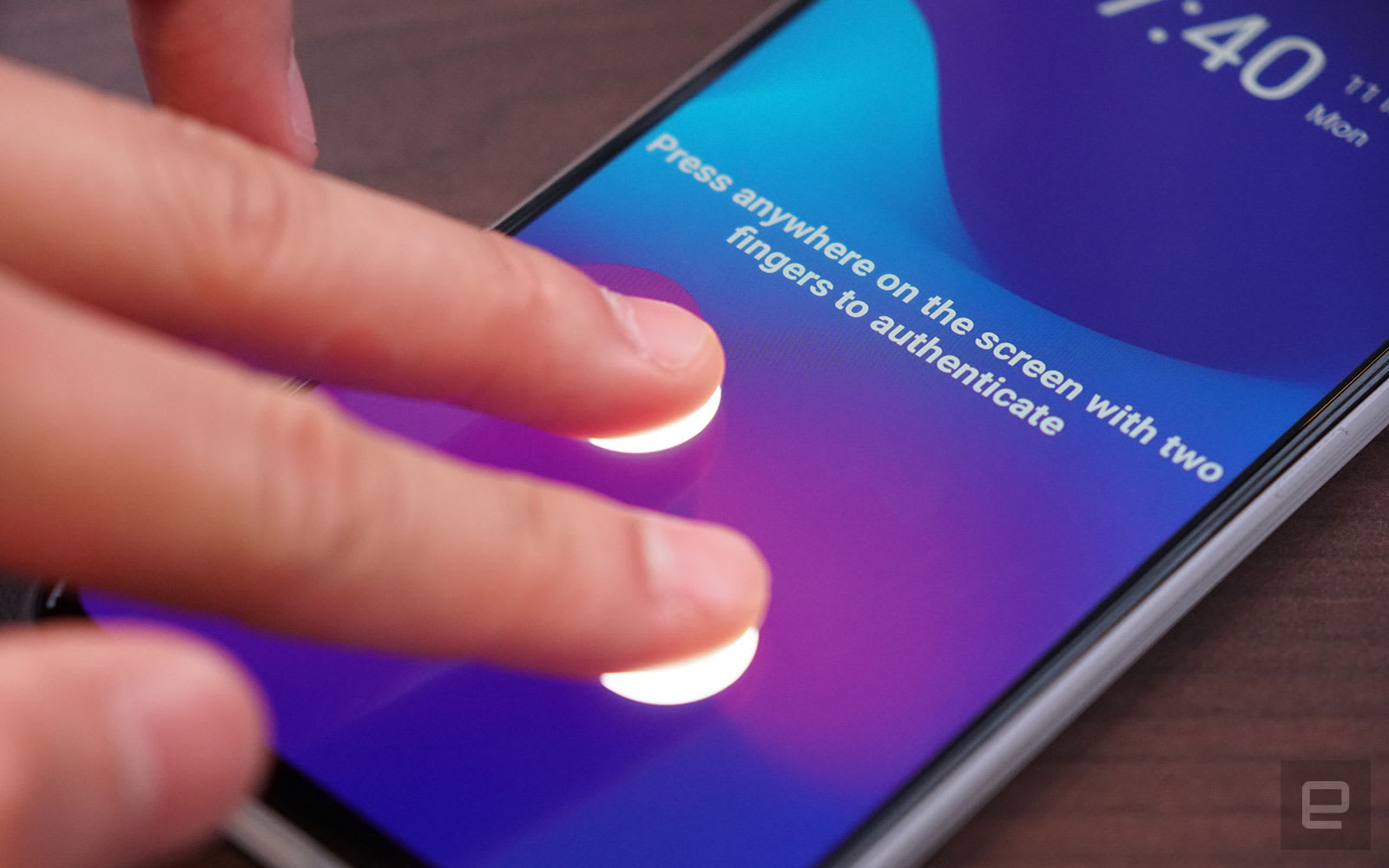 Save for the 5G connectivity and an eSIM feature which I couldn't test, those features worked surprisingly well during my hour-long demo. What impressed me most was the new full-display fingerprint scanner, which can read two fingerprints simultaneously anywhere on the 6.39-inch FHD+ AMOLED screen. Better yet, the registration process only required two taps for each fingerprint, which is a huge improvement over the 10-plus taps required on existing phones with similar tech.

Another benefit of having an all-screen in-display fingerprint reader is that you'll be able to unlock and toggle an app in just one tap. Imagine the screen waking up automatically as you lift the phone, and it shows your favorite apps or shortcuts on the unlock screen, then it's just a matter of tapping a registered finger onto your desired icon to launch the app right away.

As awesome as this beefed-up in-display fingerprint reader sounds, Ding admitted that this essentially requires an array of optical sensors covering the entire screen, which translates to a notable bump in production cost. As such, there's no word on when we'll see this technology baked into a mass-produced smartphone.

I would have also liked to test this new fingerprint reader under varied lighting conditions, mainly because this became a pain point on my OnePlus 6T and Huawei Mate 20 Pro. That said, I've been mainly using the NEX Dual Display Edition over the past few days, and its fifth-gen in-display fingerprint reader has so far been a godsend. As such, Vivo likely won't disappoint when it eventually brings the full-display version to the masses.

The APEX's seemingly more polished features worked fine too. The three invisible buttons -- for volume and power -- along the right edge each use a capacitive sensor, but they also rely on pressure sensors for optimal touch sensitivity. It's a pretty clever solution, and the buttons here were more pleasant to use -- though perhaps just a tad too sensitive -- than the pressure-sensing ones on the HTC U12+. There's tactile feedback provided by a linear motor, and whenever the buttons are touched, the screen temporarily shows visual cues to help those who aren't yet familiar with them.

The MagPort is probably the least exciting feature here, but it's probably the most practical one as well. Even though we're now living with the convenience of reversible USB-C plugs, I started growing fond of just casually slapping the magnetic connector onto the pogo pins on back of the APEX -- with a near 100-percent alignment success rate as well. 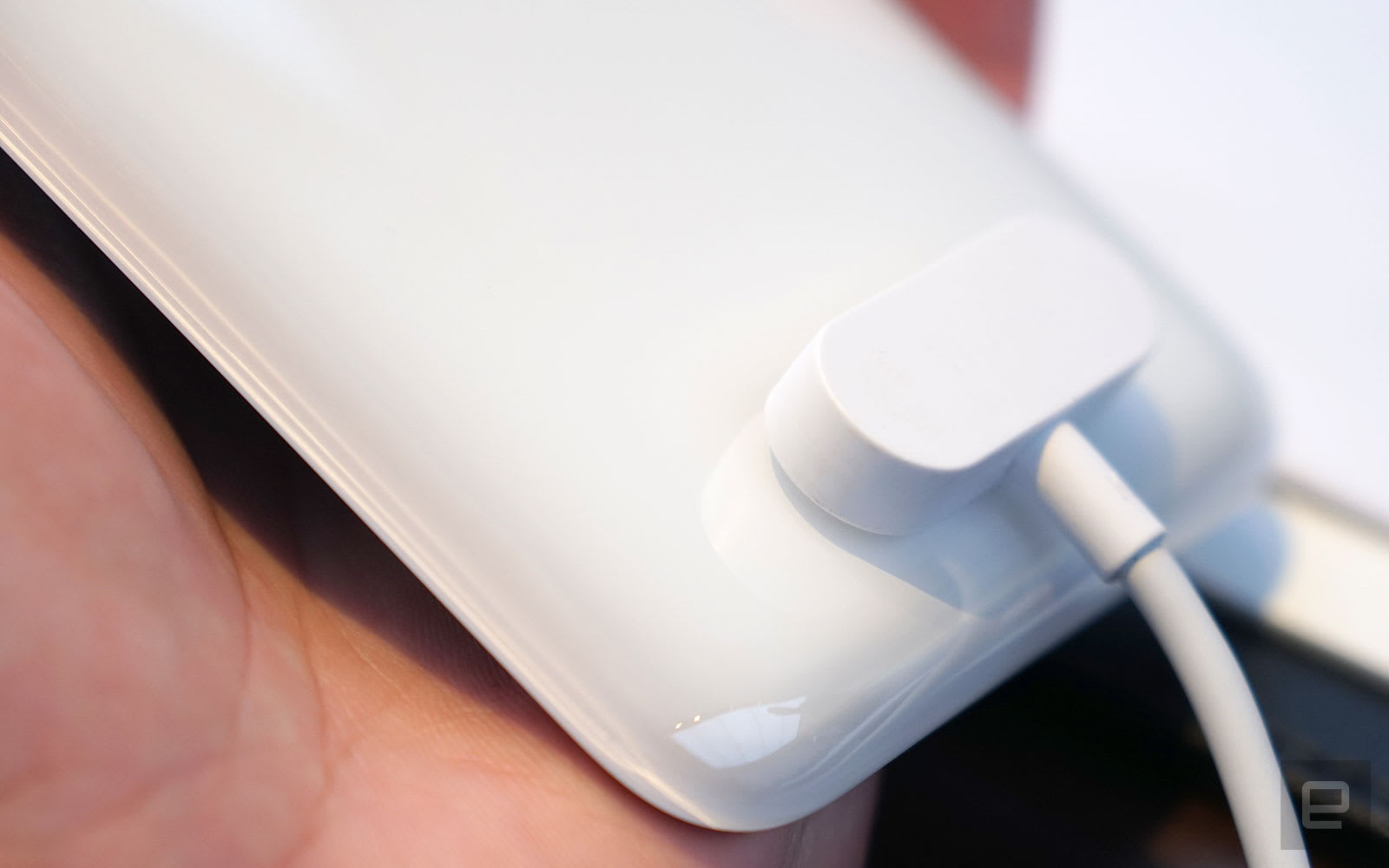 However, the APEX only does a modest 18W charging, and it's a sub-3,000mAh battery on the inside, but Ding said there's no stopping them from throwing in something better on a mass-production model. After all, Vivo does have its very own 44W Super FlashCharge tech, as featured on the company's gaming-centric iQOO range. As to why not use wireless charging here to rid the pogo pins, Ding once again said that it's all about trying something new; though he also admitted that pins are still required for wired USB data transfer, as there's no viable wireless alternative at the moment.

Last but not least: audio. The "Body SoundCasting Technology" relies on actuators closely attached to the glass back, so it was no surprise that music sounded crisp when I held up the APEX. It was loud enough, but with a strong treble bias due to the nature of the sounding material. Luckily, I got the full range back when I placed the phone on the table -- a bit like the "Boombox Speaker" feature introduced on LG's G7 ThinQ -- and it sounded surprisingly good. At least it did with that one pre-loaded soundtrack on the device.

It's worth noting that I didn't get around to trying the APEX's invisible earpiece. Here's hoping that it's much louder than the piezoelectric implementation on Xiaomi's original Mi Mix, which I struggled to use out on the streets. 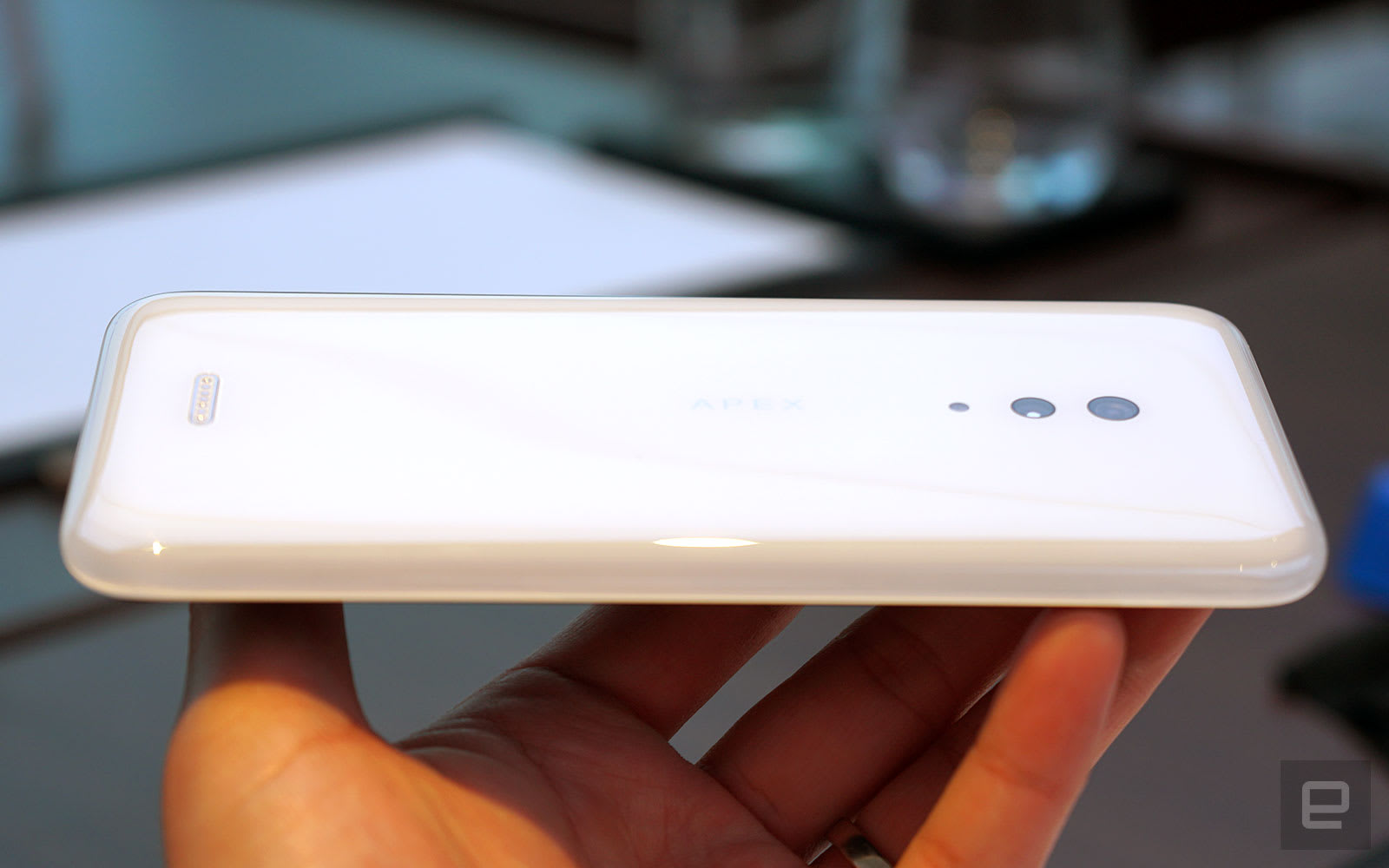 And yes, I did notice the baffling absence of the front-facing camera on this APEX. While last year's model offered a motorized pop-up selfie camera (which has since been trickled down to the NEX and the V15 series), this successor omitted that feature entirely. I grilled Ding on this subject, to which he put on his PR hat and pointed at how Vivo pioneered the pop-up camera, while also toying with dual-screen body along with various notch designs to get around this problem.

When I pushed further, Ding hesitated for a moment, and then dropped an interesting hint with a grin: "There could be other options. You may use your wildest imagination." Perhaps Vivo has already figured out how to hide the front camera underneath the screen? That would be the holy grail of all-screen smartphone design. But before that happens, I'll happily take the full-screen fingerprint reader for the time being.