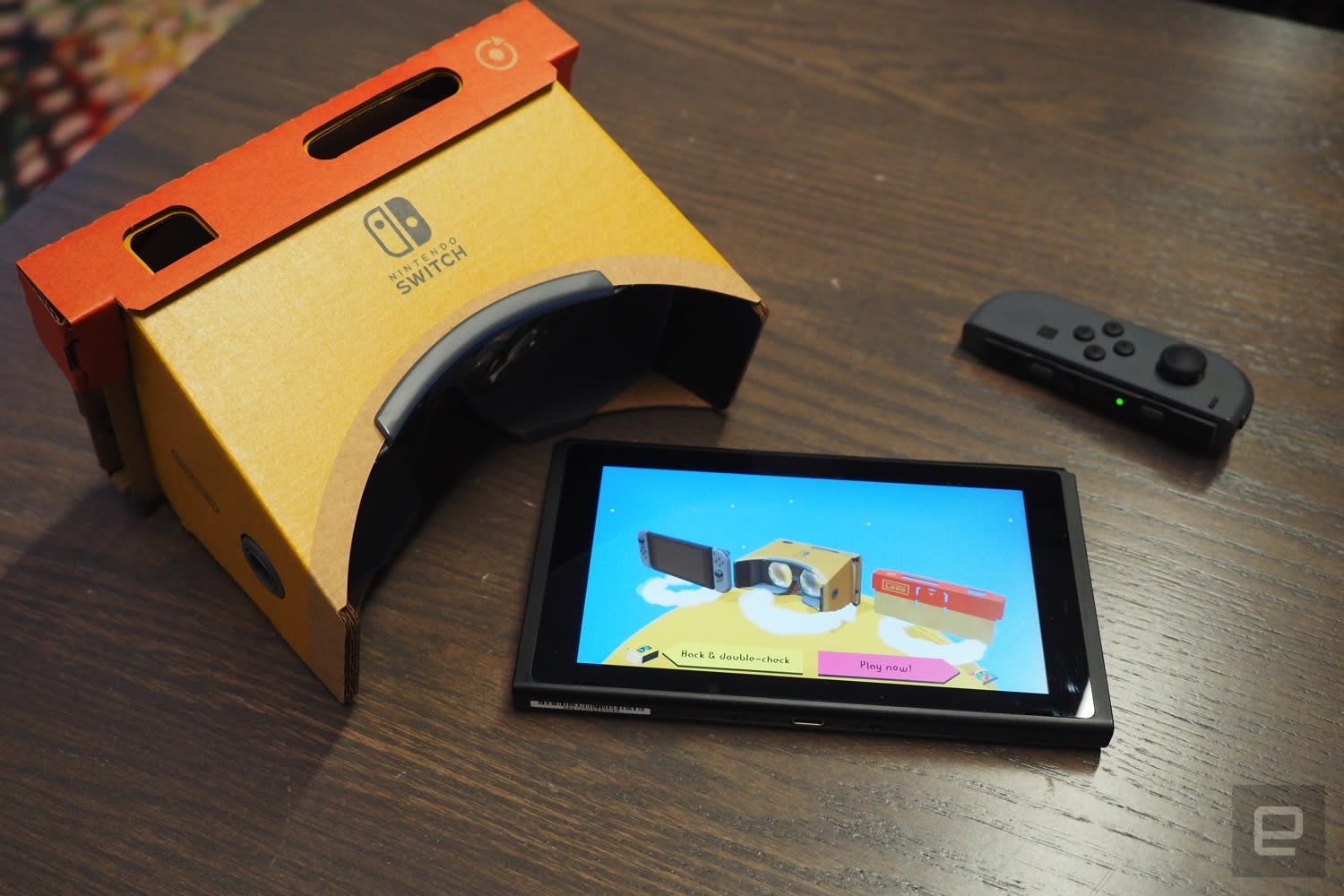 It's better than other Labo kits, but it's not going to take on PlayStation VR.

Virtual reality devotees scoffed at the introduction of Google Cardboard five years ago: Why would anyone settle for such a limited, feeble-looking piece of paper when "real" headsets were on the horizon? But Cardboard was never about competing with Oculus Rift or HTC Vive. Instead, it was a way to give non-early adopters a low-cost taste of immersive technology. Years later Cardboard has faded into the background as the VR scene has taken off, but Nintendo never forgot about the promise of low-tech VR. Labo VR builds on both the initial ideas of Cardboard and the inaugural Labo sets to create a unique, endearing and most important, playful experience.

The Labo VR kit gives you a headset to construct, sure. It's admittedly more weighty and chunky than Google's offerings, because it has a lot more work to do. It has to hold an undocked Switch console and both its Joy-Cons. Then there's a series of attachable accessories included in the kit that you must also assemble yourself. The one thing not included is a head strap. While the headset isn't heavy, holding it up to your face can get tedious.

If you own any of the three previous Labo kits, you know what to expect when you load the game cartridge up. And if you don't, that's fine. That was my first experience too, and I had no problem following the directions for each project and completing all of them fairly quickly. I ended up fast-forwarding through the directions often, sometimes screaming at the console to "get on with it!" as it felt the need to demonstrate each fold one by one. But that's me -- an impatient adult. The clarity of these directions is absolutely perfect for kids, who are the target audience for Labo. I appreciated the ability to rotate the diagrams and replay the animations. As someone who has put together a lot of STEM kits designed for kids, I am constantly frustrated by bad or unclear directions. 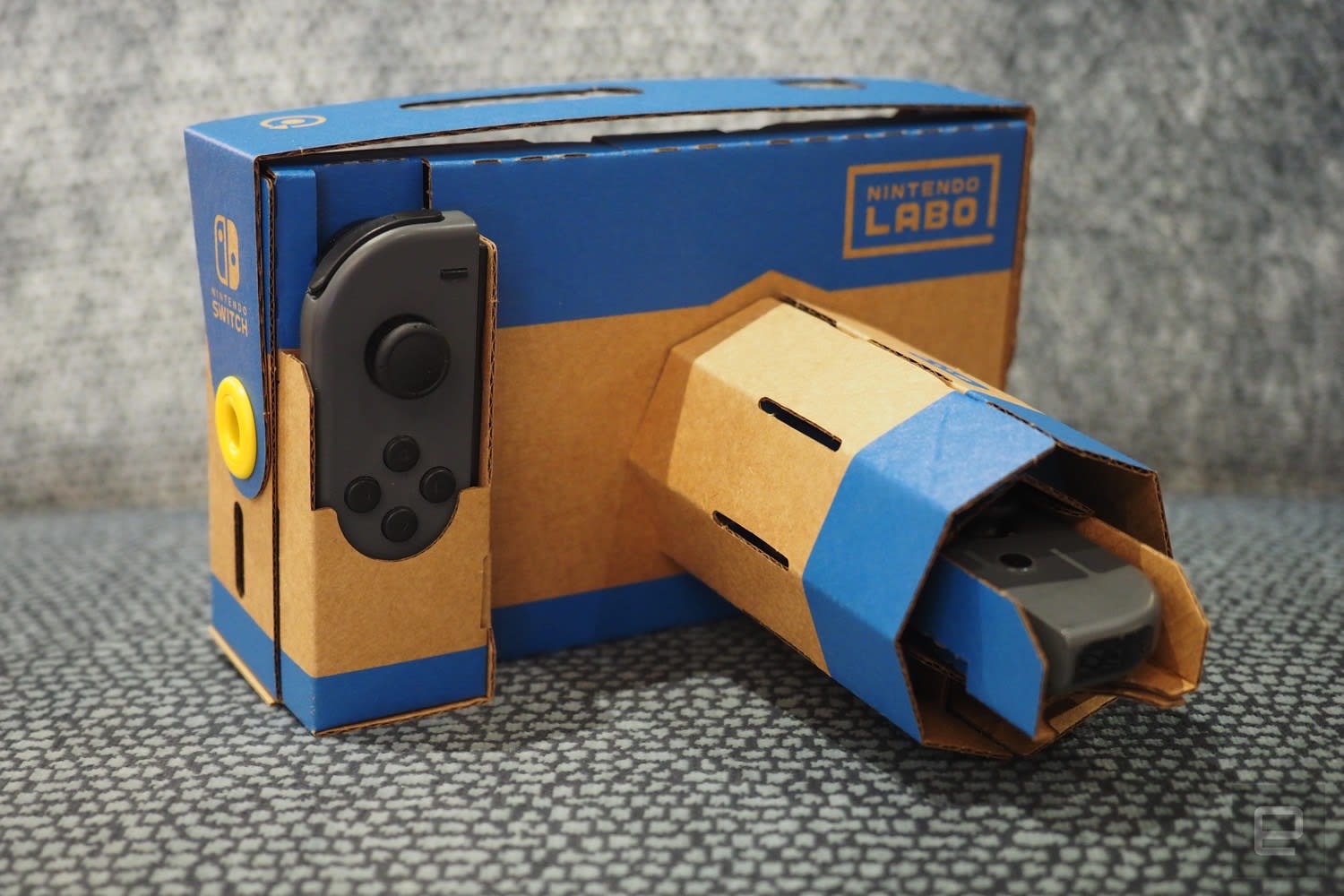 Aside from the headset, there are five major projects included in the deluxe package: a camera, an elephant, a bird, a wind petal and a blaster. The elephant and the bird had a lot of fiddly bits and I didn't enjoy putting them together as much, but the camera and the wind pedal were a lot of fun to assemble.

These happen to be the sturdiest of the projects; what attracted me the most about these two was all the thought that went into making them so solid. The wind pedal is especially fun with all of its inner crossbars, which are necessary given that you tap this thing with your foot repeatedly. When you do that, it sends a huge blast of air toward your face. It's surprisingly effective as a fan. The blaster is the most complex project, and I ended up both loving and hating it. But the final product is definitely cool. You have to cock it every time you want to fire, and the snap as you pull the trigger is incredibly satisfying. 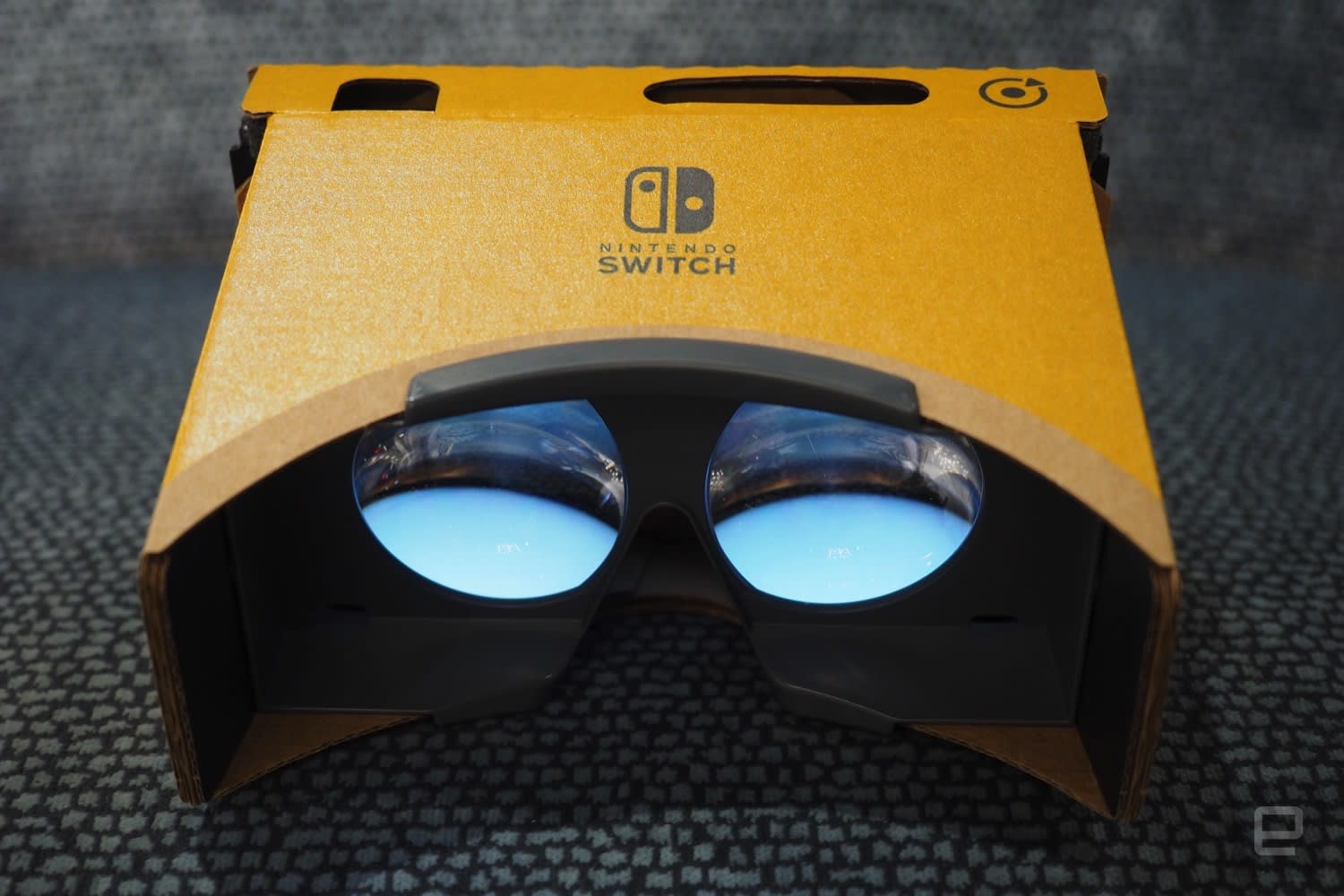 But let's be honest, you're not here to hear how fun the individual projects are to put together; you want to know how good the VR is. And... it's as good as you're going to get with a 720p display and two plastic lenses. Which isn't bad: Everything is clear, though decidedly artificial. The headset is comfortable and even fits over my glasses. There is one big problem with this particular cardboard construction though: It gets dust all over the lenses. The game asks you to keep the lenses as clean as possible, but the headset's accessories constantly shed little cardboard granules. Maybe the amount of debris that they shed will fade over weeks and months of use, but when I used it, the eyepiece got absolutely filthy and I was constantly cleaning it. Also, if you're sensitive to the scent of cardboard, remember that you're putting this thing right next to your face. It's not an awful swell, but after playing with the headset for a while I got tired of having that all up in my nasal cavity.

I don't know how long you'd actually play with it though. Right now each project has its associated mini game, but none of them are that good. The VR Plaza is chock-full of brief amusements that are good for a few minutes each. The Toy-Con VR Garage, where users can design their own games has promise, but unless you're big on DIY, you'll be waiting a while for a home brew scene to take off. And the VR updates added last week for two of the Switch's best titles aren't good. There's no killer app for Labo VR yet. 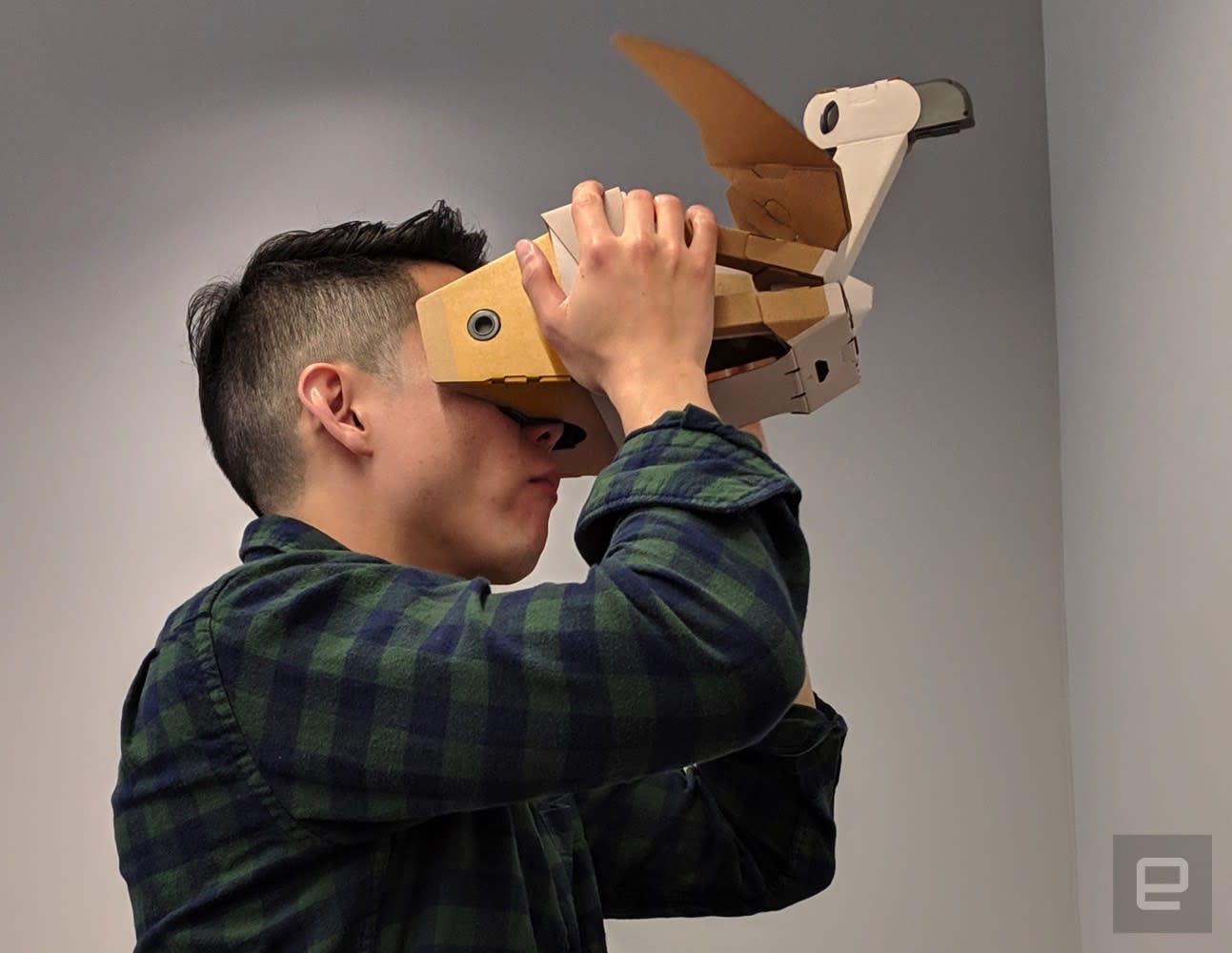 The wind-pedal game involves trying to jump over balls that float toward you. It's ugly as hell and not all that engaging. The bird game makes better use of the pedal and also uses the bird you built in a sort of flying game that reminds me of Pilotwings a bit. It's fun, but I quickly got tired from having to pump the bird's wings and the wind pedal. It isn't something you play to relax, as it requires quite a bit of physical exertion.

The painting activity, which uses the elephant accessory, was great in concept. Drawing in VR is a lot of fun once you get the hang of it. You can create 360-degree drawings with depth just by moving your arm in and out. However, handling the cardboard trunk doesn't feel that good. You're limited to one hand, the whole thing is held together by rubber bands that create a lot of resistance and the cardboard grip is a bit scratchy. 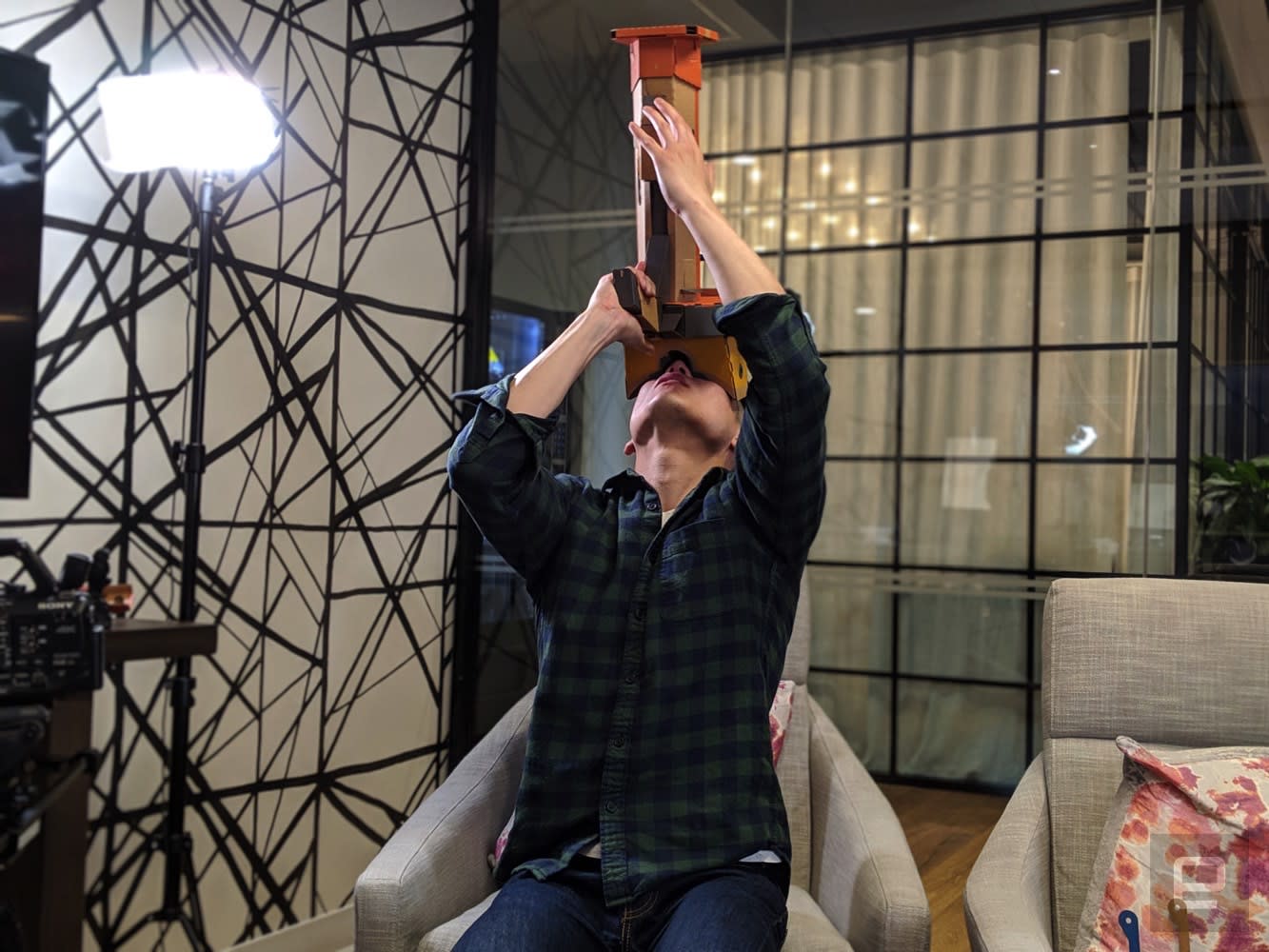 The blaster game is mostly fun because the blaster is such a joy to handle. It's a rail shooter where you fire at alien blobs that are kind of bobbing along in a city, minding their own business. It's weird from a plot standpoint (they aren't actually attacking you), and it's not all that challenging. But I liked it anyway.

My favorite game ended up being the Ocean Camera, which reminded me of Pokémon Snap in how it asked for specific creatures or settings. It's the one accessory and related game that plays into the visual capabilities of virtual reality. The camera itself is also super twee, with a small gear inside that clicks when you turn the lens as if you're handling a real shooter. And yeah, it actually zooms the camera for better shots. I would play a whole line of games that used this accessory. I could also see making it compatible with future games like Animal Crossing for Switch or heck, Pokémon Sword and Shield, given that previous games in both series have had in-game cameras.

What you do have right now is VR compatibility with two of the Switch's biggest and best titles: Super Mario Odyssey and Legend of Zelda: Breath of the Wild. These are free updates you can download, and the two take decidedly different approaches to dumping VR on top of games that were pretty much perfect to begin with. And yeah, I mean dump: In both games, the VR mode is decidedly worse than playing the game normally. They're not Virtual Boy bad, but they're still kind of bad.

Breath of the Wild's VR mode is just that, an option. It's just the regular game, but now you get to hold the Labo VR headset up to your face with the Joy-Cons attached. It looks good, but it's uncomfortable. Also, VR sickness, ahoy! Breath of the Wild is a game where you'll be looking around a lot and sometimes quickly, and the graphics the Switch delivers are worse than those on the high-end headsets. Mind you, those companies have been trying for years and still haven't completely solved the nausea problem. So you're going to have to take a lot of breaks to avoid getting sick. 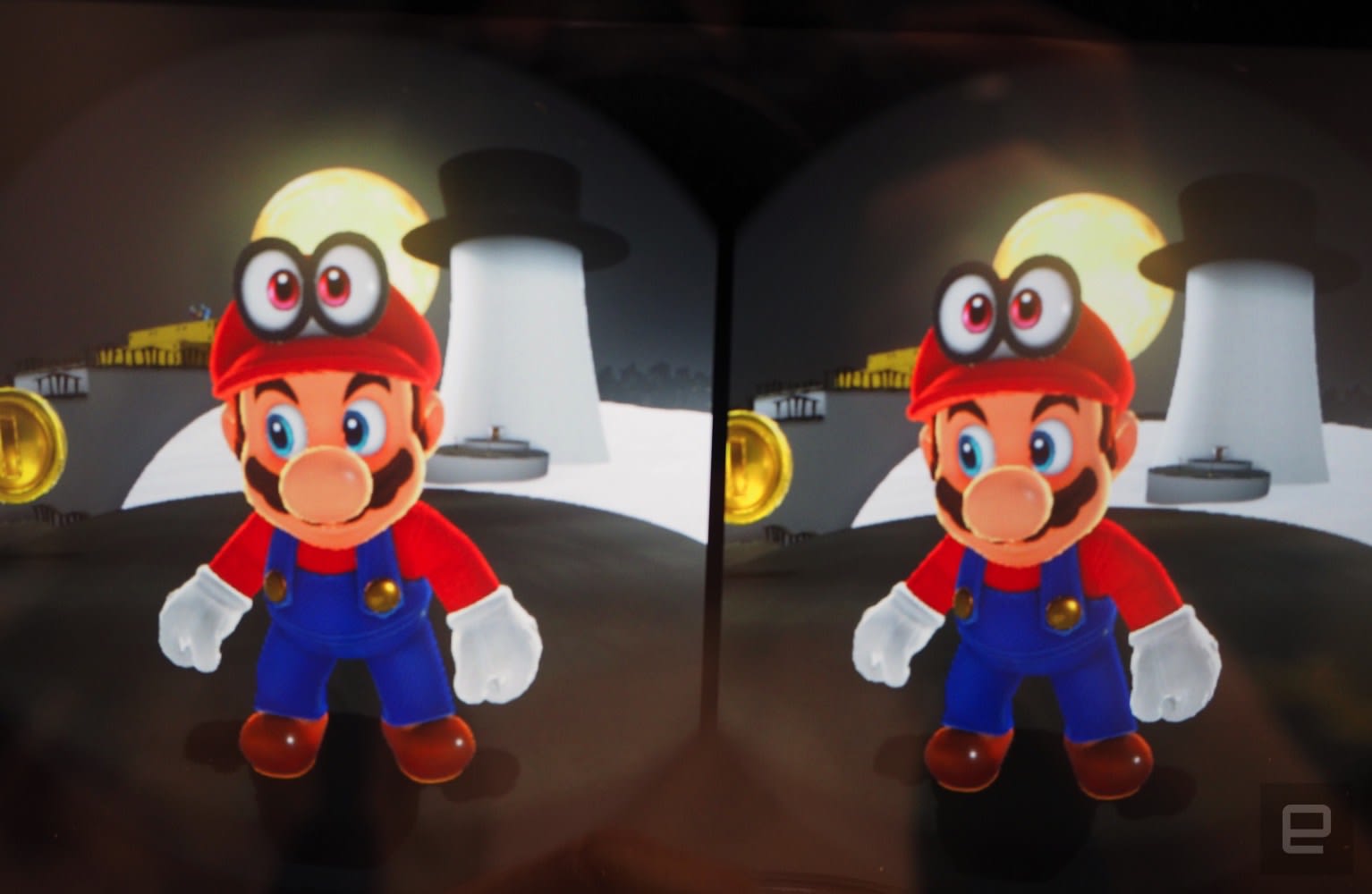 Super Mario Odyssey actually went so far as to craft new missions that can be experienced in VR. You can play them normally, but I don't see why you'd want to. You're put in a stationary position, directing Mario with the controls but not actually following him around the levels. To look around you must turn in the real world, even if you're not using the headset. It's tricky and frustrating, and forgets that part of the fun of Mario is exploration. Instead of immersing me deeper into Mario's adventure, I felt further removed, since I could only watch him from my fixed location in the center of the board.

The games did look good, but given Nintendo's reputation for valuing solid play experiences over graphics, it's disappointing. 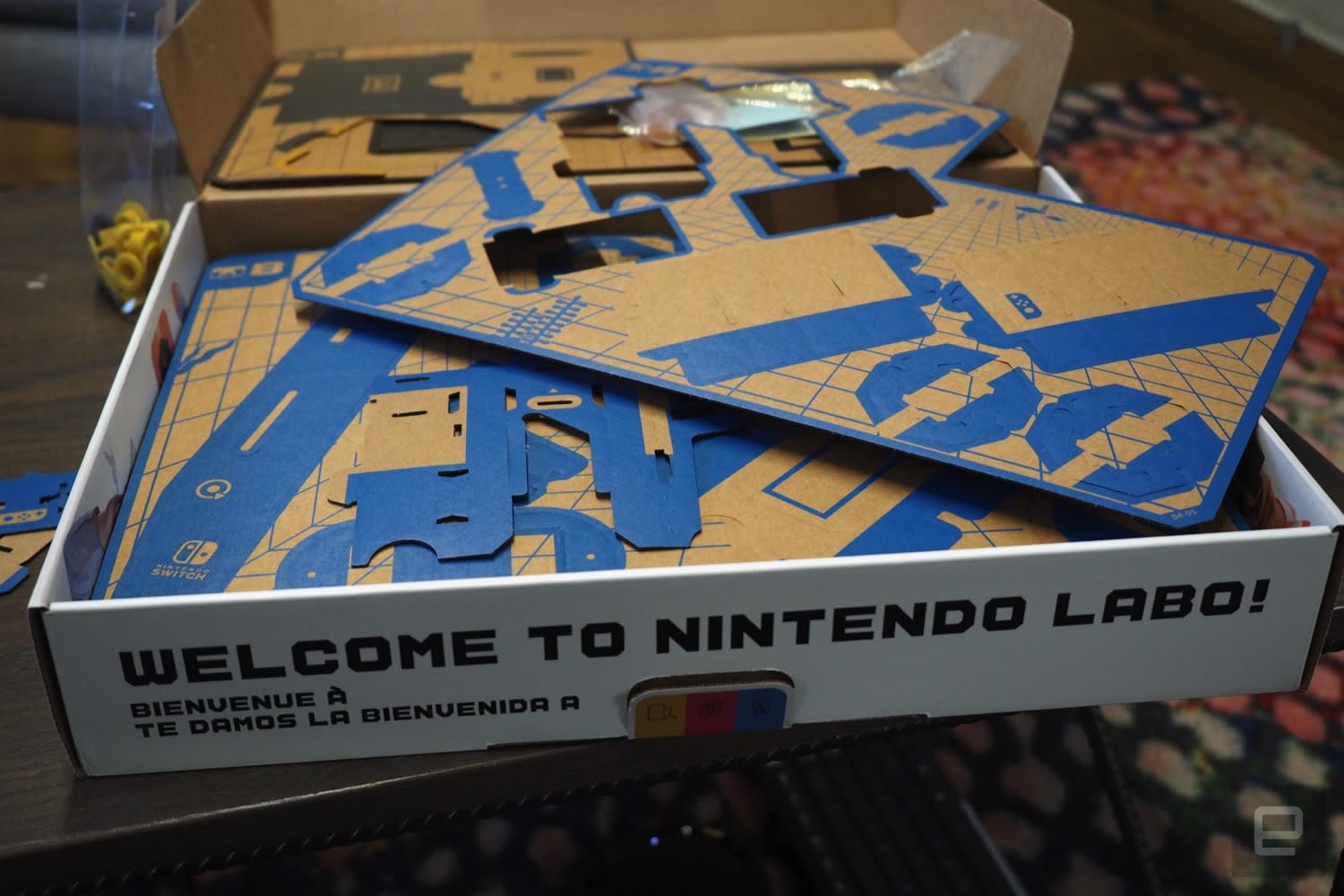 Labo VR isn't going to compete with the likes of PlayStation VR, and not because the Switch is less powerful than the PS4. It doesn't compete because it's presenting a different type of play experience, where the construction of the headset and its accessories are part of the package. If it were a pre-built headset with a bunch of accessories, I couldn't recommend it at all, at least not at its current price of $80 for the complete set.

If you're curious about Switch as a conduit for VR, I'd say opt for the $40 starter package, which includes the headset and the blaster (which is the best project anyway). You'll miss out on the wind pedal and the camera, but those are available through the two expansion sets, which cost $20 each. So you're not spending more money by choosing to purchase the projects separately.

If you've enjoyed the previous Labo kits or want to dip your toe into the ecosystem for the first time, go for it. This is a good experience on its own, and Nintendo seems to have learned from the mistakes of the last batch of Labo. There's also a lot of potential in it as a vehicle for VR in other games -- games that can be built from scratch with Labo in mind. But with nothing announced at this time, I wouldn't hold my breath waiting.