Fortunately, the two go together quite nicely.

The interior of the EQC is quiet. Well, it would be if the rain would let up. But the whir of electric motors has all but been eliminated from the cabin. Mercedes actually created subframes to detach the powerplants from the main body of the car. The automaker might have built an electric SUV in the EQC 400 4Matic, but first, it made sure it built a luxury vehicle worthy of its three-pronged star logo.

In the Norway countryside last week, I drove the first real electric vehicle under the Mercedes brand. The Smart sub-brand might have been electrified years ago, but to be honest, the FourTwo EVs were a far cry from the type of luxury we've come to expect from the company. Plus, Smart is being phased out in the US, so a Benz with a battery will soon be the only Merc you can get stateside.

While driving a few variants of the EQC 400, I encountered the luxury I've come to expect from Mercedes-Benz. In addition to a quiet cabin, the cloth-and-leather seats were plush. The round vents have been replaced with vertical airways accented in rose gold. China is a huge market for EVs and the country's obsession with the color is well-documented. But I was told that the color (which also appears throughout the interior) is a nod to the copper wire found in electric motors. Whatever the reason, it works. 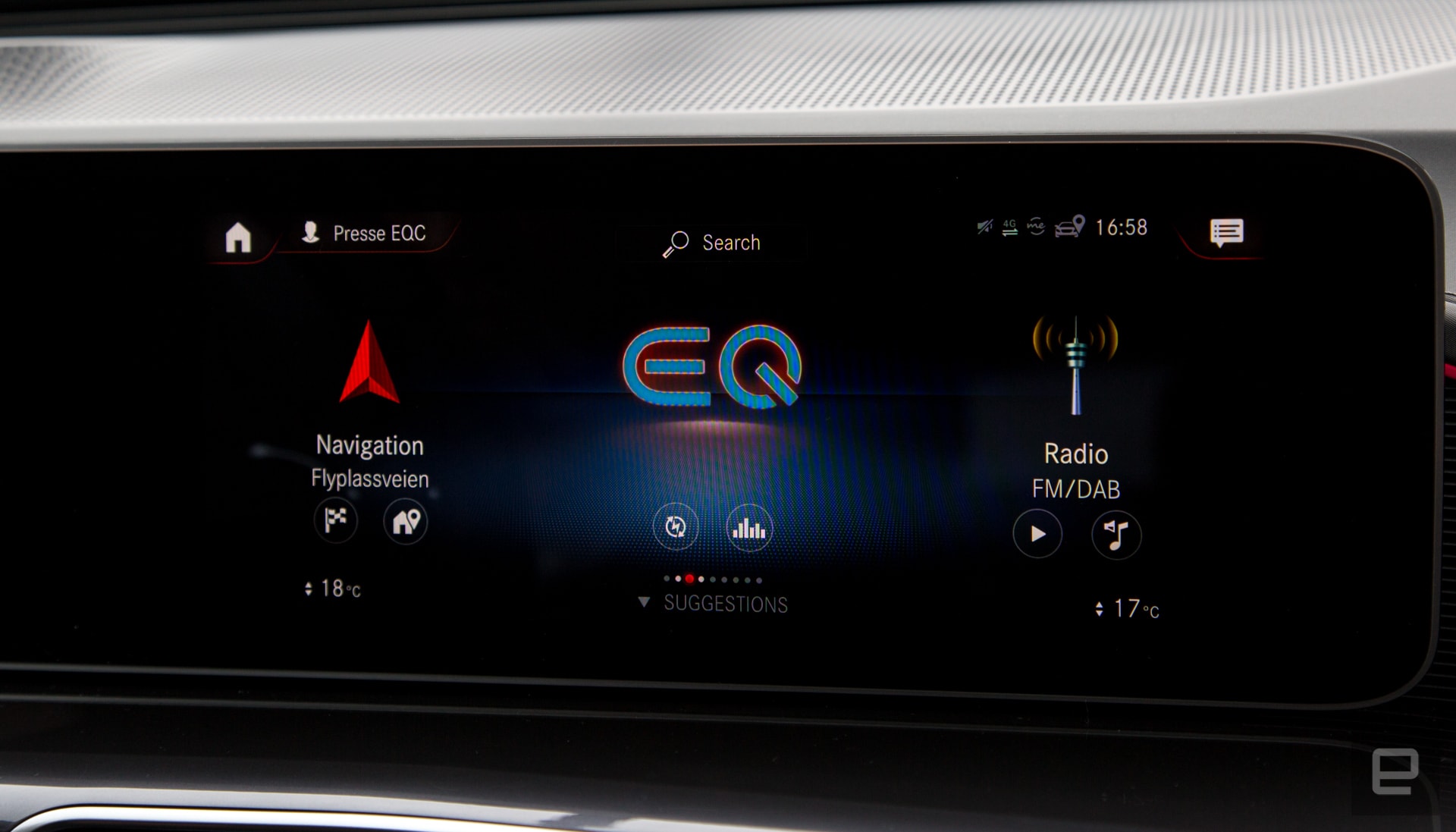 As expected, Mercedes' amazing MBUX infotainment system is on display here. It has an additional EQ feature for electric cars, and the voice assistant has been updated accordingly. For instance, you can say "Hey Mercedes" to ask about range or to prep the battery for a charge. But the system has also been tweaked to make sure you get to your destination.

The most important addition to MBUX in the EQC is the ability to find charging locations along a route, in the car and through the companion iOS/Android app. The system will give you the drive and charging time along your path, but the app makes it particularly easy to adjust the amount of battery you feel comfortable having as you reach each station. It'll let you get down to 10 percent before hooking up to the grid, but if you'd rather have a bit more of a buffer, you can change it to, say, 20 percent. You know, for peace of mind.

It'll support fast charging up to 110kW, and to make sure you get to your destination without too much hassle, Mercedes is aiming to have a payment partnership with about 80 percent of the charging stations in the US and Europe. The result of this endeavor is that drivers would pull up to a station along their route and the car would act as the payment system. Sort of like ApplePay for charging but with the SUV you're driving.

During the drive to Grandma's (or wherever you go on road trips), the EQC 400 4Matic combines the fun torque of an EV with the posh driving style of a Mercedes. It has 402 horsepower and 564 pounds of torque and can hit 60 miles per hour in 4.9 seconds. The engineers wanted quick EV acceleration without any neck-snapping. The EQC still goes fast from a standstill, but it's been tamed ever so slightly during the takeoff. The steering is tight without any twitchiness and cornering was about on par with other Mercedes SUVs. Those batteries do lower the vehicle's center of the vehicle of gravity; unfortunately, the tradeoff is added weight. The EQC attempts to find a middle ground. 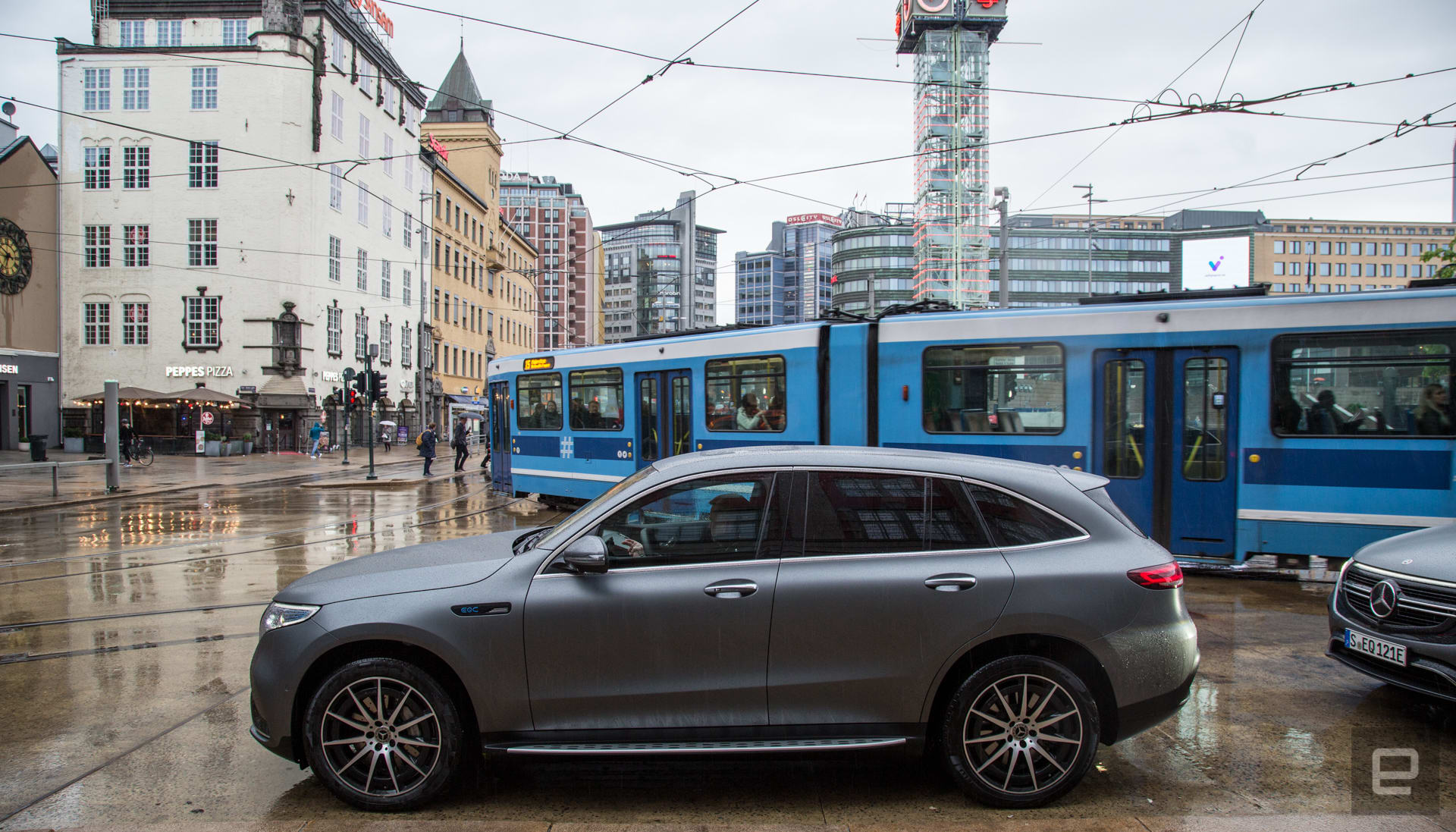 The 4Matic all-wheel-drive system (powered by two electric motors) made short work of the nearly non-stop rain I encountered during the drive. In the downpour, Mercedes gave us an opportunity to do a zero-to-60 launch and try quick-turning maneuvers on a closed course. The SUV handled the track without any issues. Sure, driving on a sunny day on dry roads lets you test the limits of a car. But rain-slicked asphalt gives you the opportunity to see what happens to a vehicle when the weather gets bad. People of Seattle, the EQC is ready.

No electric car is complete without some sort of adjustable regenerative braking situation and the EQC has its own system. Mercedes added four levels of motor-assisted deceleration, from pure coasting to the most aggressive setting that allows for one-pedal driving. You let off the accelerator and the car comes to a stop. It works well, but I would still like more time with it to really get a feel for how well it fares on city streets.

The exterior design of the EQC melds the current Mercedes design language with something a tad more futuristic and slick. Basically, it looks like a German luxury SUV that's been sanded down. It's like someone molded a GLC and then lopped off all the sharp edges. The result is an SUV with the drag coefficient of a sports car.

The public wants electric SUVs, but they also want range and to reduce their carbon footprint. Mercedes (like every other carmaker) is trying to appease the buying public while sticking true to its heritage as a luxury brand. Unfortunately, we don't have final range numbers for the US, but according to NEDC tests in Europe, it'll manage up to somewhere between 277 and 293 miles on a charge. The EPA's test is far stricter than Europe's and does a better job matching real-world conditions, so expect a lower number -- probably in the 230- to 240-mile range. 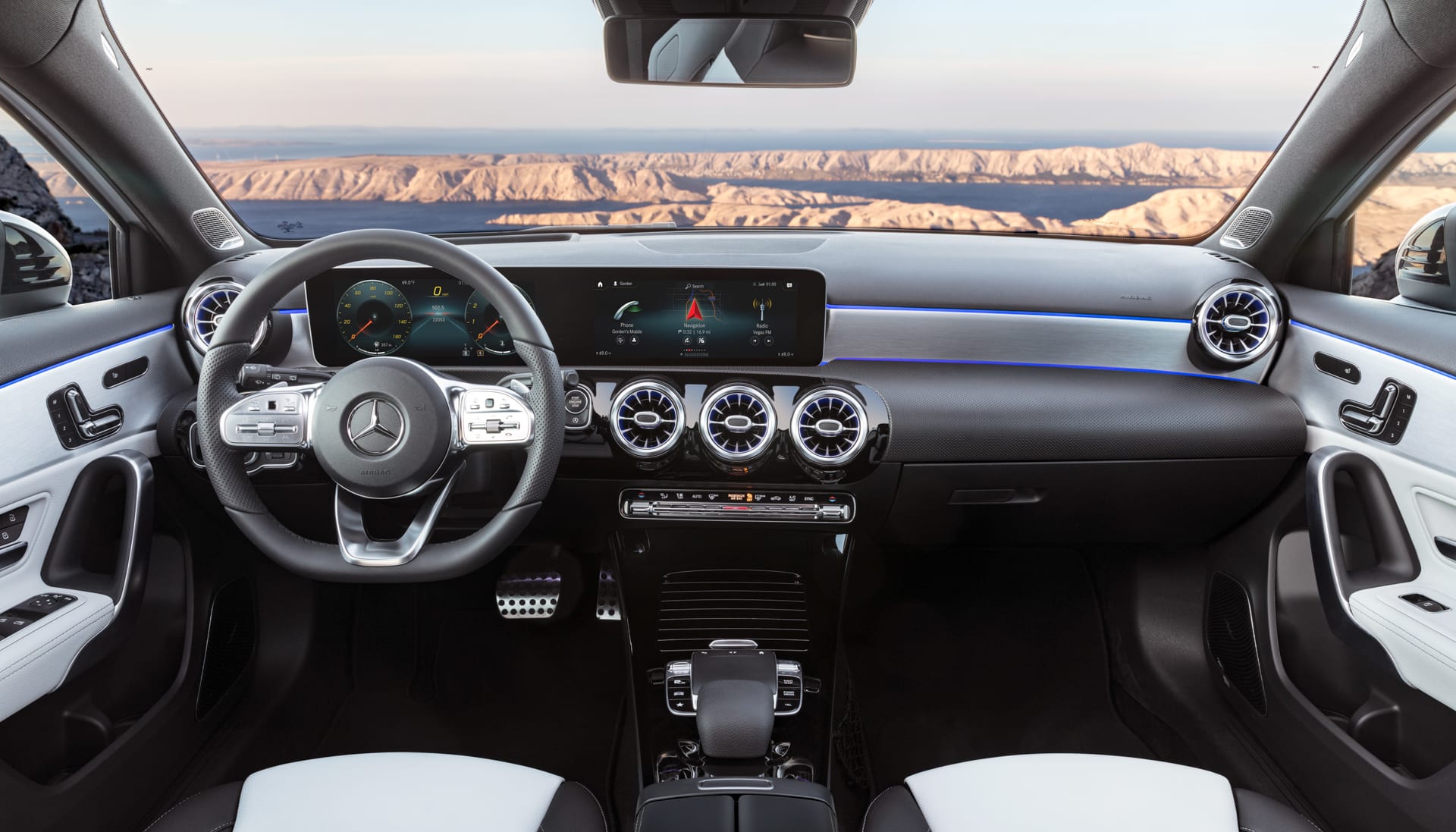 We're also not sure of the price yet. But what we do know is that the EQC 400 4Matic will arrive in US showrooms sometime in 2020, at which point it will join a growing number of luxury SUVs and crossovers vying for customers in the market for high-end, eco-conscious vehicles. Some of those buyers will be looking for an uncompromising Mercedes to put in their garage, and it looks like the automaker has delivered just that.