Facebook's $5 billion FTC fine is historic, but everybody knew it was coming. Three months ago, during its last quarterly earnings report, the social network estimated that it would be fined between $3 billion and $5 billion over the Cambridge Analytica scandal. And even though the FTC ended going for the higher fine, the company's stock still kept rising today after the news broke. It's also pretty clear that $5 billion is pretty much a wrist slap, after Facebook reported second quarter revenues of $16.9 billion today, up 28 percent from a year ago. What good is a huge government rebuke if Facebook can barely feel the loss?

With that perspective, the SEC's $100 million fine, which concerns "misleading disclosures" the company made around data risk, seems practically pointless. And then, of course, there's today's other big whoopsie: It turns out Facebook continued to give 12 partners access to user data even after saying it would cut them off. 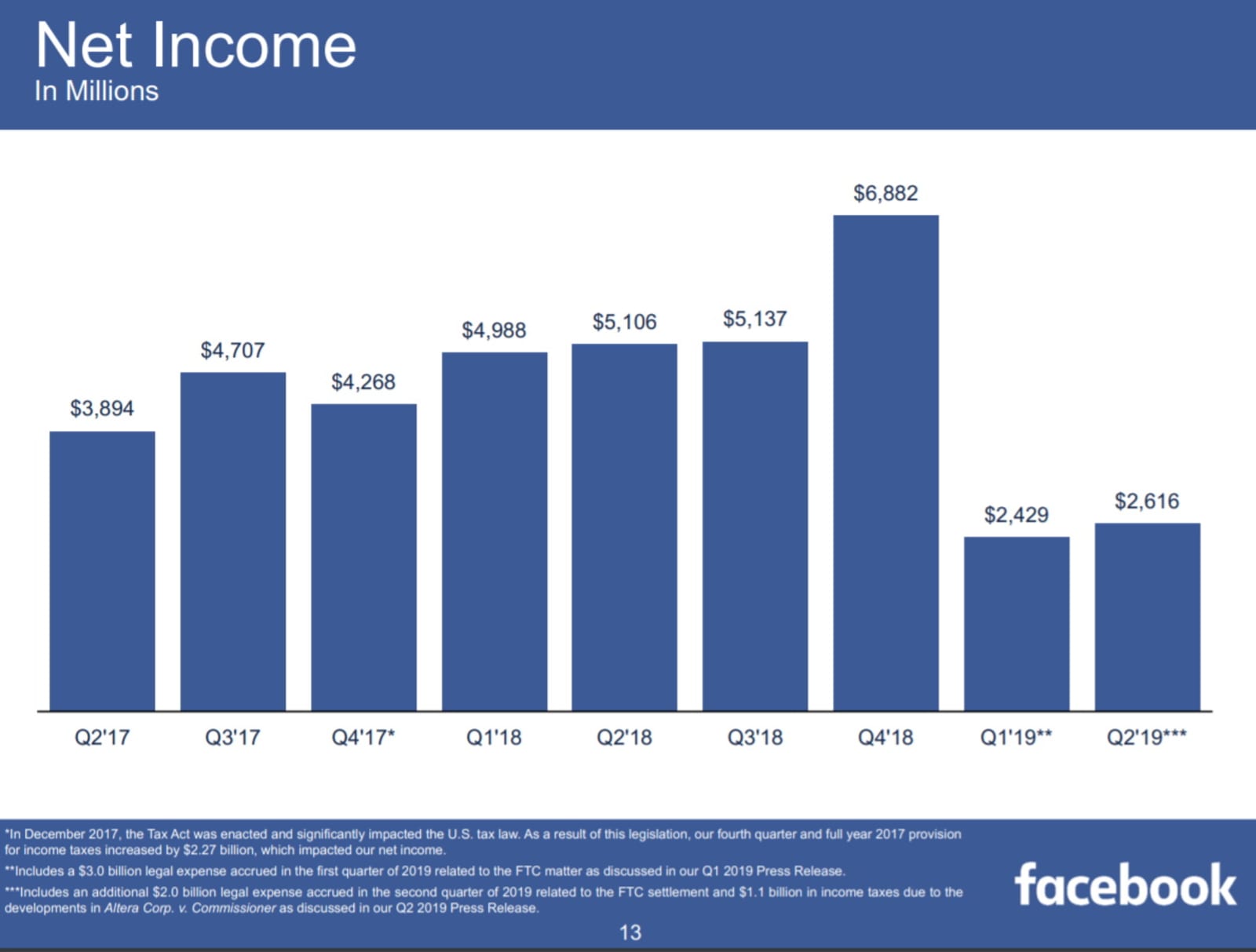 After accounting for $2 billion from the FTC's fine (the company squirreled away $3 billion for that last quarter), as well as a $1.1 billion tax expense, Facebook reported a net income of $2.6 billion. That's down 49 percent from a year ago -- not exactly heartening, but the company can argue these are all just one-time fees.

And when it comes to engagement, Facebook's growth seems unstoppable. It reported 2.4 billion monthly active users during the quarter and 1.59 billion daily active users, both of which are 8 percent higher than last year. The company says 2.7 billion people use its apps each month -- including Instagram, Whatsapp and Messenger -- while 2.1 billion use one every day, on average. Additionally, Facebook says 94 percent of its advertising revenue came from mobile ads, up from 91 percent last year.

During the company's earnings call, CEO Mark Zuckerberg admitted that implementing a new independent privacy committee, a result of the FTC settlement, could mean that it'll take longer to implement new features. That's not a huge surprise. Previously, the company embraced the motto "move fast and break things," which emphasized speed above security and stability. But it's clear that fixing the mistakes of its past will be slow-going.

All products recommended by Engadget are selected by our editorial team, independent of our parent company. Some of our stories include affiliate links. If you buy something through one of these links, we may earn an affiliate commission. All prices are correct at the time of publishing.
Facebook continues to grow like crazy, despite FTC fines
business
facebook
facebook earnings
gear
internet