As Samsung expected, its Q2 profit is off from last year's by about 56 percent. An operating profit of $5.6 billion (6.6 trillion Korean won) is no small figure, but obviously not up to par for the electronics giant, and follow a similar result in Q1 of this year. A big reason for the fall is a drop in prices for memory chips, which Samsung is a major supplier of for products like smartphones and servers. It's also negatively affected by weak iPhone sales since it supplies Apple with parts, and is facing slower sales for its own high-end phone models.

Last year Samsung was looking toward foldable devices to help turn around the trend, and after a delay it's still expecting the Galaxy Fold to join its Galaxy Note 10 as an "innovative" new product launch. According to the company's report, it's also pushing ahead on 5G.

Also, as "protective global trade practices" increase and customers are increasingly reluctant to buy new high-priced phones, Samsung will "introduce more competitive A series models in the second half" to take advantage of interest in the midrange models. It already announced plans to bring the Galaxy A50 and a few others to the US, and if that pace increases then we'd expect to see more models like its A70 (pictured above) that puts many of the Galaxy S10's features in a cheaper package. In an accompanying slide it specifically called out the Galaxy A80, which combines a motorized slide mechanism and rotating camera.

Similarly, it's not expecting to see the TV market change much in the near future, but it will try to increase profits by pushing its latest technology: 8K. According to Samsung, it's time to take the lead by "positioning QLED 8K TVs as mainstream TVs." We'll see if mainstream consumers are ready to bring that monster 98-inch Q900 set home. 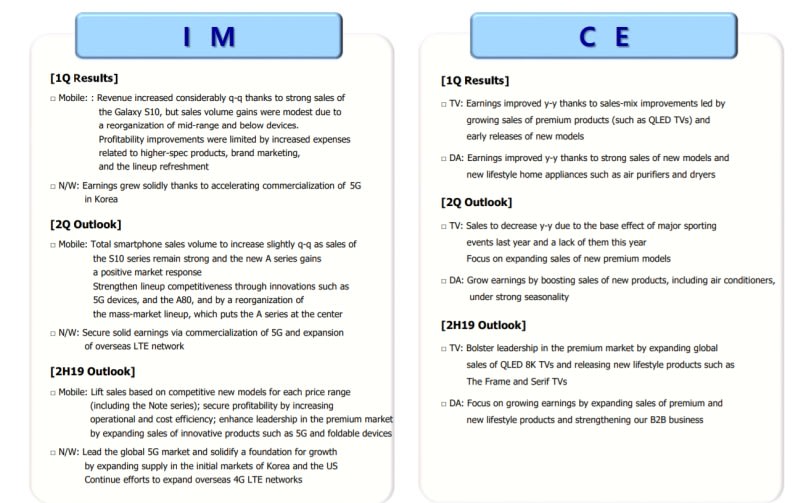