A ‘No Man’s Sky’ virgin tackles the latest update.

If there was ever a game that rode its hype train off a cliff, it's No Man's Sky, which burned bright right up until the moment people got to play it. From a jaw-dropping announcement at E3 2014, it was clear that the infinite, procedurally generated game promised a lot.

Spoilers for the early chapters (and the very end) of No Man's Sky, although only a couple, because Dan got waylaid.

I was so won over by the original trailer that I bought a PS4, returning to Sony after a decade with an Xbox 360. No Man's Sky was a clear reason to buy the console, and I was determined that I would love it, right up until it got kicked to death when it launched. Critics and fans seemed to agree that Hello Games had over promised -- and seriously underdelivered.

This infinite procedurally generated universe was a technical marvel, but it was often empty, buggy and ugly. There were missing features, and people felt that No Man's Sky was barely a game at all, just a technical marvel to admire and move on from. Some fans even complained to the UK's Advertising Standards Agency about being misled.

I can understand that feeling of anger, because these space exploration, trading and fighting games inspire so much devotion, and invite a feeling of betrayal. It's no wonder that Chris Roberts, a man who knows this genre better than any person on Earth, has struggled to release Star Citizen. But, credit to Hello and Sony, who have worked to remedy the issues with the game, pushing out seven updates since 2016.

According to Hello Games, No Man's Sky: Beyond, released last week, is "the best time to start a new journey," with new missions, better tutorials and a streamlined "early game." The tweaks make the game less intimidating for new players and serve as an apology for existing ones. Because I'd paid the title no mind since its original critical humbling, I knew pretty much nothing going in. Three years later, my mission was to see if No Man's Sky was a game worth playing by someone like me. 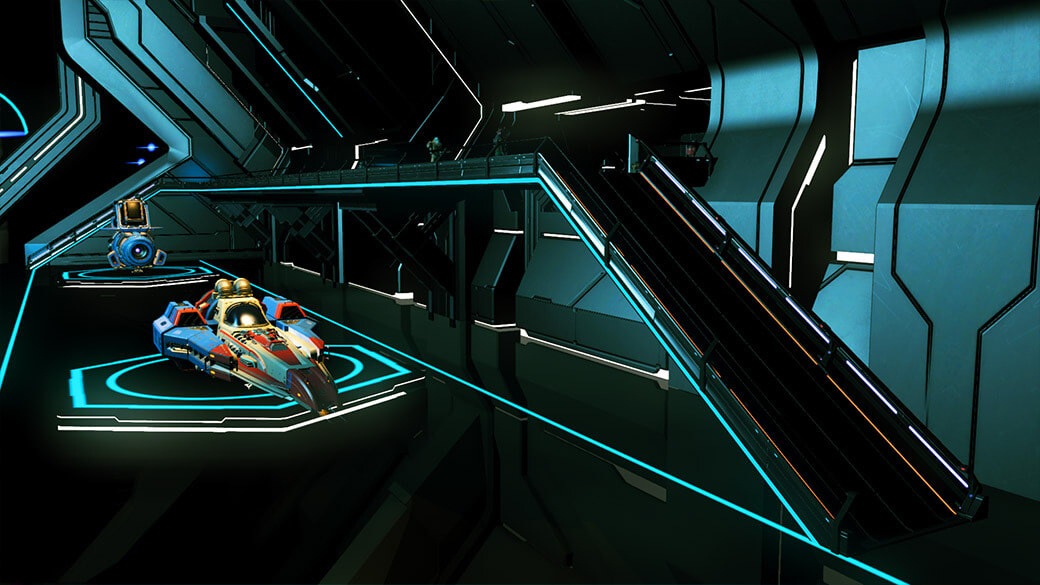 The extra ramp (at the front) makes getting around space stations a lot easier.

The first thing I noticed is that, despite the promise of an infinite universe, No Man's Sky wanted me to stay in one place. The Artemis Path (the storyline that begins the game) centers on a distress beacon you need to respond to. Except I can't, at least immediately, since I need to mine various elements from the surrounding area to fix my crashed starship.

It's not straightforward, however, because of the volume of busywork the game threw at me during my journey. You know how an IKEA is pretty small, but because of its labyrinthine layout, you have to walk what feels like miles from start to finish? No Man's Sky is like that, stopping me from getting from A to B with some obvious "drag this out" style obstacles.

My starter planet was hazardous enough that I had to scurry back to my ship to avoid the acid rain after every resource hunt. And the player motion is achingly slow. I covered ground in the same sclerotic manner you did in the first Dead Space. This can be improved, later, with upgrades, but you'll find yourself muttering "come on" as you shuffle up and down hills. There's a jetpack is primarily designed to help you land safely if you fall in a hole. But it burns oxygen, so you use it sparingly.

Thankfully, the game held my hand through the initial work to get back into the sky. Crafting recipes are pinned to the screen, and there were hints on how to get to where I needed to go. It's all very gentle, albeit time consuming.

In those early stages, it's a very on-rails experience. The first time I hyperjumped, I could only go one way, with no freedom to deviate from the path. Because of this, I still don't quite understand how hyperspace jumps work because you're not shown what to do, you're told to follow along.

But the game isn't so on-rails that it won't let you make a catastrophic mistake and almost make it unplayable early on. The first major quest of the game is the Artemis Path, which was introduced to NMS in the 2017 Atlas Rises update. In my version, I found Artemis' crashed vessel on a planet which you need to land on to learn more. In my case, the world was rich in resources, but rife with Aggressive Sentinels. The game does not warn you that many sentinels will kill you the second you set foot on the planet.

I landed, got out of my ship and repaired the distress beacon (to advance the game) before being set upon. A small army of the little robot bastards got me, and I had no way to fight back, so I carved out a cave from a nearby hill with my terrain manipulator and hid. But the Sentinels don't leave you alone, and so I was pinned down, far from my ship and any hope of rescue.

My assumption was that the game had accidentally placed a story-crucial moment on a planet that would make the story impossible. So I figured that I'd try to play along best as I could under the circumstances. I also guessed that it was part of the story (and the tutorial) that I'd wind up owning Artemis' ship, so I dug a tunnel down and under the ship.

When I accessed the ship, the game asked me if I wanted to claim the horrifically damaged ship as my own. And I said yes, because normally if you claim something, you don't lose all of the things you already possess. Imagine how many gold speculators would have existed if you had to give up your home every time you found another plot of promising land.

Experienced players know where I'm going with this.

I claimed the vessel, but because you can only own one ship at a time, my existing ship disappeared. Thanks, Sean Murray, for leaving me stranded in a cave on a beautiful but hostile planet. I tried to pull the ship underground, but that didn't work either, leaving me trapped in a cave with no means of escape. And this is still early enough in the game that I don't have a bolt caster -- the basic weapon in game -- or gear enough to defend myself against the space feds.

At this point, I cheated and tried to find some helpful tips online (I'm sorry). Apparently, sentinels don't enter bases. So I built a base computer and hoped they'd respect the boundary. Reader, they did not. With the last of my resources, I built a transporter and generator in my hollowed-out cave and raced to the nearby space station.

From there, I headed back to the base on my first planet, with no sentinels, but killer plants and a toxic atmosphere. My desperate hope was that I could find enough gear there to safely fix my craft and get back to the main storyline. I mainly needed Chromatic Metal, which you refine (in game) from copper, which isn't exactly scarce, but not abundant either. There was only a handful of copper deposits in the surrounding area, so I had to walk to find more.

At this point, I spent three or so hours wandering, on foot, around my local area on the hunt for more copper. You know those moments in Red Dead Redemption when the game encourages you to go out for a ride in the wilderness? You know, when José González starts playing, and you're basically told to admire the bleak beauty of what's going on? Imagine that, but with a sinking feeling that you'd kill your game before it had a proper chance of starting.

I kept wandering, and wandering. There were a few copper deposits, but not enough to fill a single slot's worth of Chromatic Metal, let alone 19. I was close to giving up. Then, during lunch the next day, I had an idea to save my game (and this story). If you launch from a space station, you don't need a working launch thruster -- the system does it for you. Which means that if I could float in space and shoot some nearby asteroids, I'd be able to mine them for gold and earn plenty of cash.

(When you use a transporter to get from one location to another, your ship is magically moved with you. So you can jump from a planet to a nearby space station, and your vessel will be parked in the lot outside.)

I had just enough cash to buy the gear necessary to fix the pulse cannon and two inventory slots. Then, slowly, gingerly, I floated out into space and shot the gold and silver out of some nearby asteroids. I landed soon after and sold them for cash to buy another couple of upgrades. And so I continued.

At the same time, I had to evade the pirates who decided to pick on me since I was very easy prey. Thankfully, being so close to the space station meant I could high tail it back to safety when the bad guys got too close.

It's hard not to notice the obvious through-line, from Elite and Privateer through to No Man's Sky. I think they're all pessimistic, featuring a universe as a bleak, hostile environment that'll end you any way it can.

If the pirates don't kill you, then you'll get stomped on by the military-industrial complex, or get mauled to death by a rogue animal on a distant planet. But there's a solution: tinkering in your backyard, far away from home, hunting and gathering your way to survive the day. If you go in expecting a capital-G Game then, naturally, you'll be disappointed.

Maybe that's one of the reasons that No Man's Sky had such a rough time in its beginning, the gripes about missing features aside. Because it doesn't place you within a narrative, grooming you for an ultimate destiny as ruler of the universe. You and your character are not a key point in a larger plan, you're just trying to get by, any way you can.

Going in, my worries would be that No Man's Sky would bore me with the sheer volume of its nothingness. But, in fact, the lack of a story means that I'm making one up in my own head, and it's probably better than whatever Hello Games could have crafted. It presents you with a hostile world and tasks you with coming up with strategies to think around your own problems.

Yes, I didn't manage to get to the center of the universe, but after Googling what that entails, I'm not sure I even want to. Instead, I'll keep playing out my little survival drama in this corner of the world in the hope of doing more than surviving.

Of course, I could list my nitpicks -- the procedural nature of the universe means there's lots of very dull repetition. Fly low over a planet and you'll see the terrain repeat itself, and there's only one model of a crashed freighter I've seen countless times. I've not yet bothered looking for the materials to open its cargo pods -- it seems like another waste of time. But I've stopped judging No Man's Sky for its graphics, or its storyline, because it's less of a game, it's an experience. Now, if you'll excuse me, I need to get back to it.