TCL is experimenting with a personal cinema visor

It's like the wearable screens by Royole and Sony, only smaller, and sunglass-ier.

TCL turned up at IFA this year with a couple of prototype devices that it hopes will inform the future direction of its products. The first was a "wearable display concept" that looks an awful lot like the personal cinema headsets that pop up every 18 months or so. It's a pair of smart glasses with two OLED displays hovering over your eyes to try and trick you into thinking you're sat in a cinema.

Unlike Sony, Avegant and Royole's offerings, TCL has shrunk the technology into a pair of relatively svelte sunglasses with a polarizing filter on top. Sound comes out of speakers embedded into each arm, and the headset connects over USB-C to a compatible (TCL) phone. Rather than this being a device that you only use in the comfort of your home, TCL envisages this as something you could wear on the go, or on a train.

The two displays over your eyes are opaque enough for you to watch a movie in relative comfort, but around it everything is semi-transparent. So, if you're on a train, and a conductor comes up toward you, you'll have enough awareness to get your ticket out. Although the person next to you, who might hear the bleed coming from the small speakers, might not be your best friend.

In attempting to trick your brain into thinking you're watching a 100-inch screen, the prototype does do a better job than some existing headsets I've tried. It was like sitting in the smallest room in a mall multiplex, the 30-seater venue for films soon to drop out of release. You've got a sight that's a little bit bigger than a TV, although you're still aware that it's a trick.

The transparent halo around the displays is meant to be for safety and situational awareness, but it breaks the illusion that you're watching a big screen. It doesn't help, either, that you can't relax or move your head while you play. Also, even though it's lightweight, because you're sitting so still, it's quite tiring. When you turn your head, the screen remains in a fixed position and it is a little unsettling.

When you're in a theater, you can look away from the screen if it's too bright, or hunker down in the chair if your back is feeling sore -- do that here and you'd bump into the goggles. It's just unnatural because it's a weight on your face. 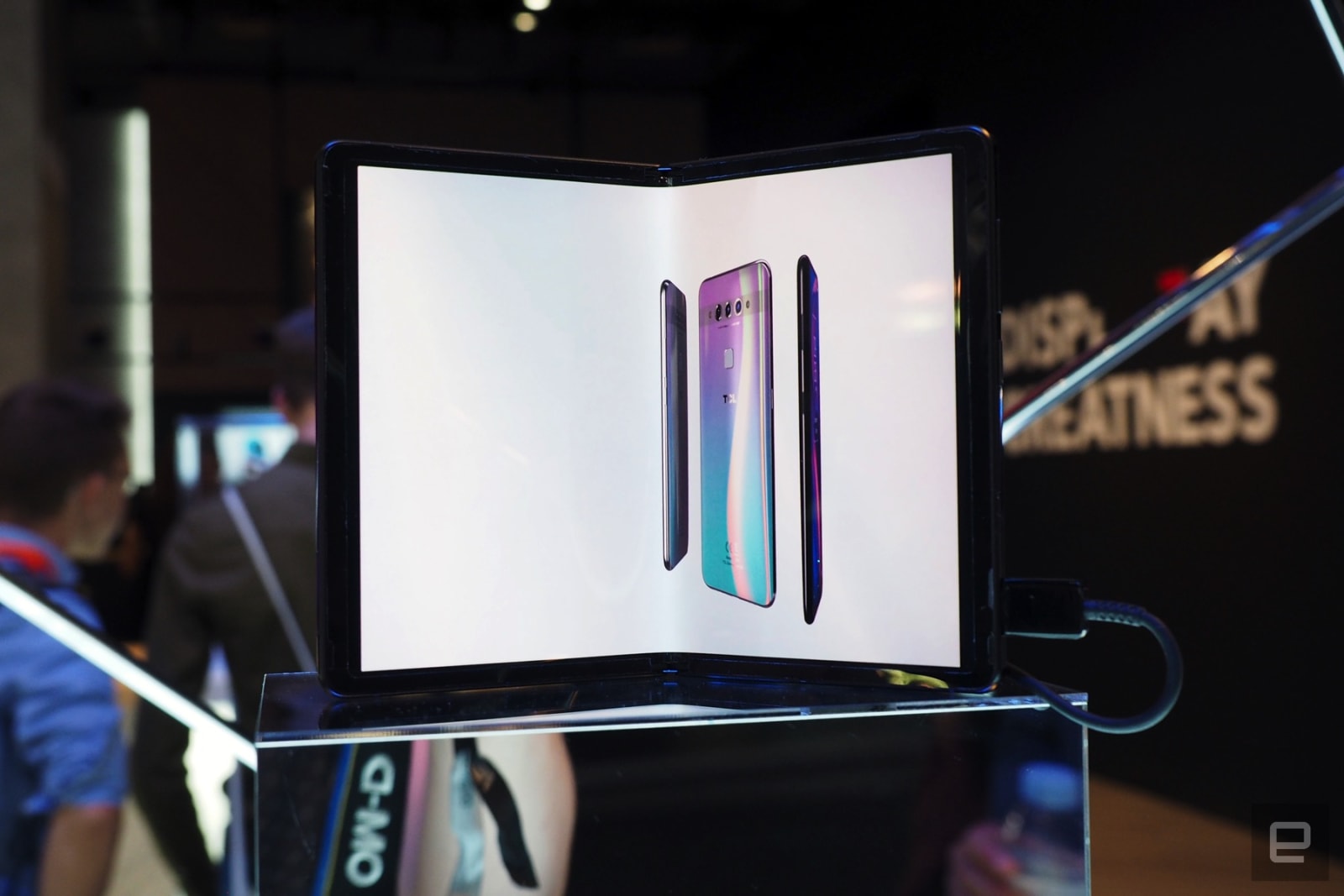 At the same time, TCL showed off yet more of its prototypes for a folding phone, promising to release one at some point in 2020. The 7.2-inch "foldable tablet display concept" opens flat and closes flush, and doesn't have a secondary display on the outside. Instead, you'll have to open up its folds to expose a flexible, 2,048 x 1,536 (2K) AMOLED display. TCL says that the screen is rated for around 200,000 folds, although if you had to open it up every time you had a message, that might prove quite taxing.

Of course, the company won't precisely say when it'll actually release one of these things, but it's happy to let Samsung and others make the first move. TCL's representatives also said that it's still researching the best way to fold and store a flexible display — including in a square, rather than a rectangle. But talk is easy, and we'll judge the company's efforts when it demonstrates a working, commercial version next year.

And as for the Visor, TCL says it's firmly a concept for now.