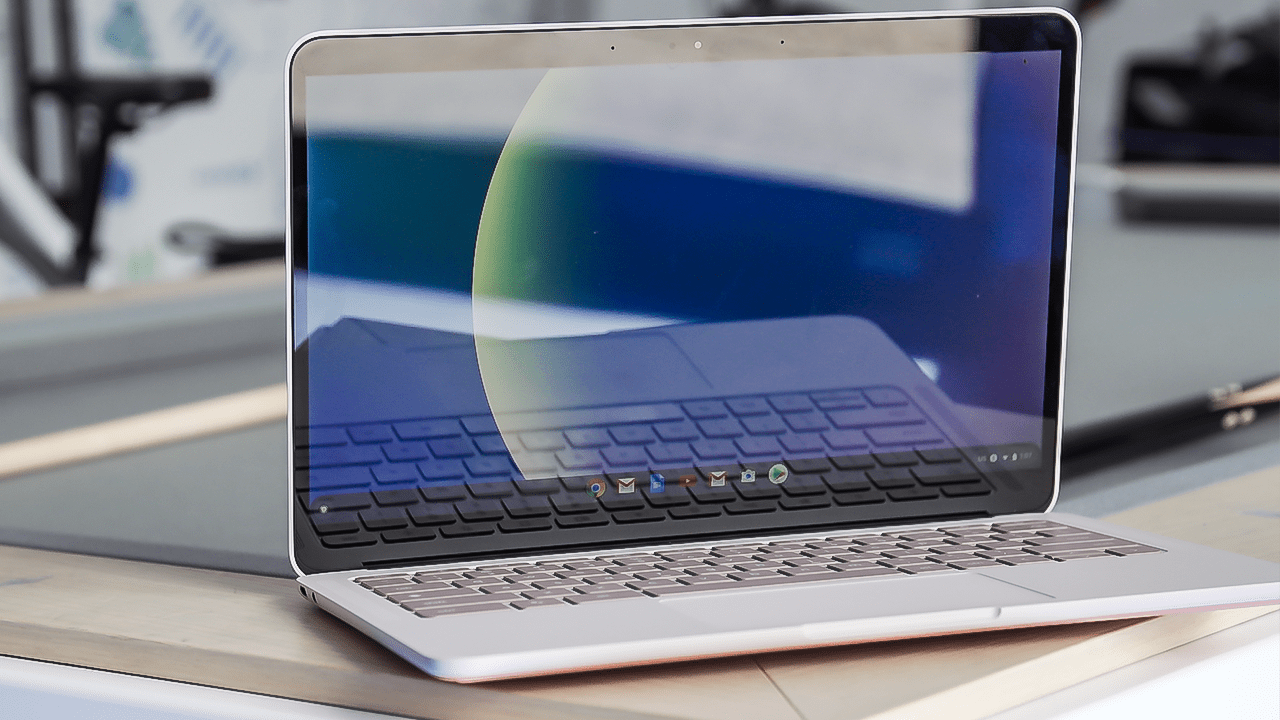 Google's Pixel laptops used to be synonymous with "expensive." With prices upwards of $1,000, the company's Chromebook Pixel and Pixelbook were costly products meant only for the most ardent Chrome OS fans. Paradoxically, they were launched at a time when most people associated Chromebooks with cheap, secondary laptops -- you'd have had a hard time finding a third-party option that cost more than $350. But now that premium Chromebooks are popping up and Chrome OS is starting to make its way into workplaces, it seems people are ready for a Pixelbook for the masses. The Pixelbook Go, which the company unveiled today, could be just that. It may be more expensive than the competition, but it's not just another exorbitant shell for Chrome OS.

One of the most obvious clues that the Pixelbook Go is a different beast is its exterior. Where the original Pixelbook (and even the Chromebook Pixel before it) had sharp angles and a sophisticated glass-and-aluminum design, the Go is a rounded-rectangle that's reminiscent of the pill button in Android. The new laptop, available in black or the faintly rosy "Not Pink" shade of the Pixel 3, is also made from a painted magnesium alloy that makes it lighter than its more expensive stablemate. Specifically, it's 0.1 pounds lighter than the Pixelbook, which weighs 2.4 pounds, which seems completely negligible. More noticeable is the difference in profile: The 13.4mm Go is also thicker than the original (10.3mm).

On the underside, the Go's base has a ribbed surface that Google said makes it easier to grip. The Not Pink model's base, by the way, is louder -- more coral than pink. When I closed the laptop and picked it up, it felt like I was carrying around an iPad inside a faux leather folio.

The Go's aesthetic isn't really my style, but there are a few things I was very taken by. It might sound weird, but my favorite feature is how easy the new Pixelbook is to open with one hand. To make that as convenient as possible, Google did a couple of things. It engineered the hinge to be just resistant enough that it rotates with the force from one finger, but not so slack that it doesn't stay upright at all angles. 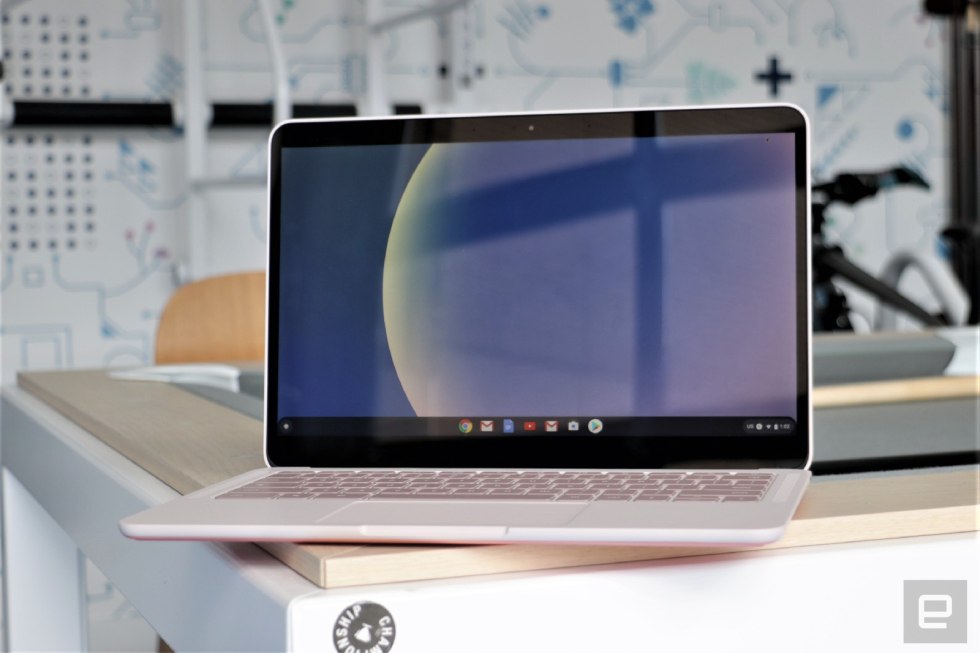 Since the Go doesn't rotate all the way around to become a tablet like the original Pixelbook, it didn't need as stiff a hinge. The company also made the Go's base a little heavier than the lid so that the laptop doesn't topple over when you open it.

Again, I admit it's a little weird for me to be so into this one feature that has nothing to do with the Pixelbook Go's performance, but I stand by it. After years reviewing laptops that I've needed to pry open with my fingernails or claw apart with both hands, Google's thoughtfulness here is refreshing. I wish all laptop makers would take this cue and make all their notebooks (14-inch and smaller, anyway) so easy to open.

Another thing I liked about the Go was its keyboard. The original Pixelbook was lauded for its comfortable and quiet keyboard. Still, as senior product manager Ben Janofsky told Engadget, the company wanted to make sure the new Chromebook had an even better keyboard. The team took the original Pixelbook's setup and spent two years iterating on it to make it better. I enjoyed typing on it -- the spacebar is noticeably quieter than my ThinkPad and the original Pixelbook. The keys themselves were cushy, with satisfyingly soft feedback. I wish there were just a bit more travel, as I've gotten used to the generously deep buttons on my ThinkPad.

Like the original Pixelbook, the Go's keys are backlit, although they're subtle enough that you won't notice the lights unless you're in a dark environment. Below the keyboard sits a roomy trackpad that in my brief testing was just as responsive as before, and no longer sits flush with the edge of the keyboard.

The Go features a 13.3-inch touchscreen that's just slightly larger than the Pixelbook's 12.3-inch panel. It comes in full HD and 4K resolutions at a 16:9 ratio that Janofsky said is better for split-screen multitasking than a taller layout. The bezels are a little thinner than before, although they're still noticeably thicker than, say, a Dell XPS 13 or an HP Spectre 13. 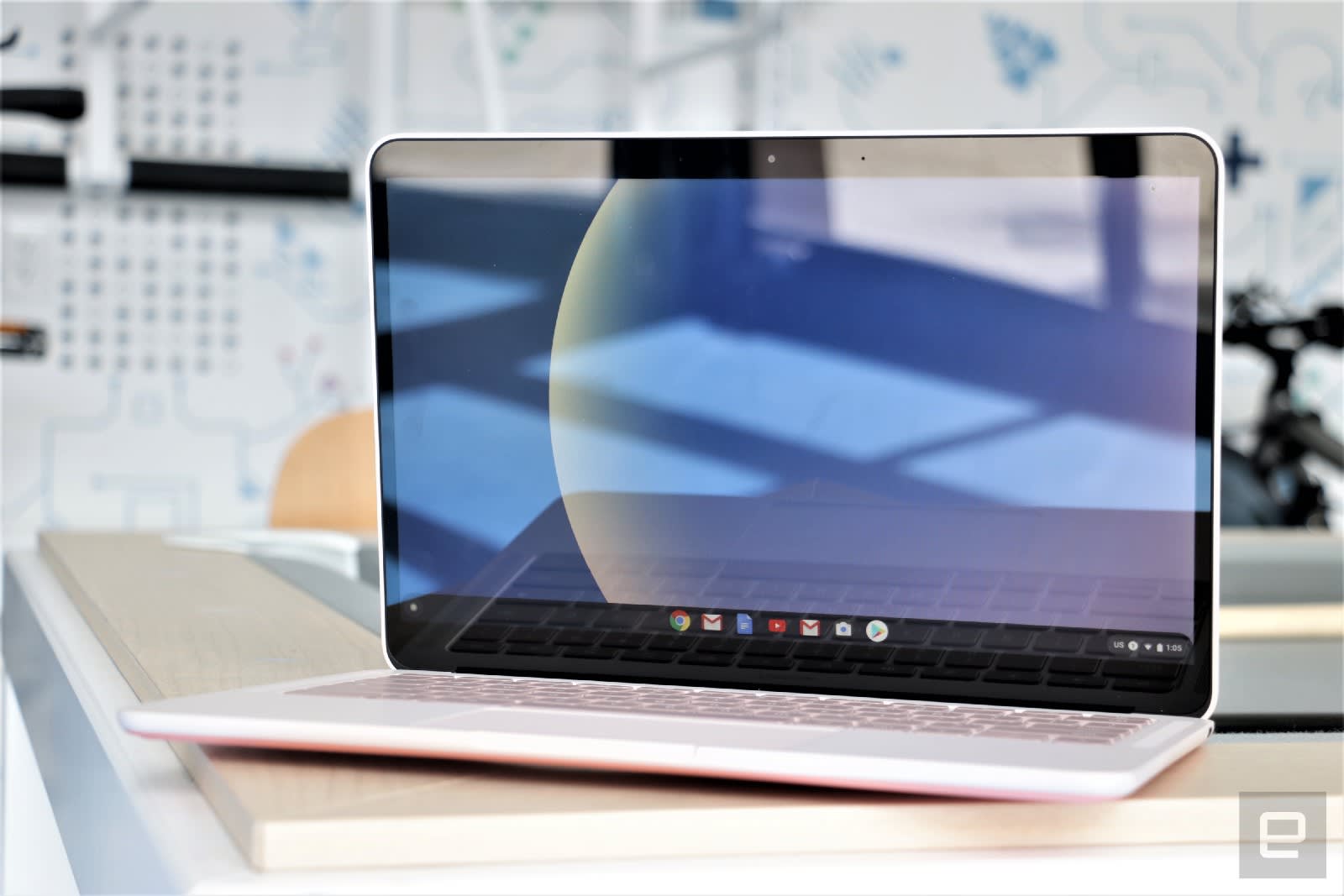 On our full HD demo unit, I watched a couple of Engadget review videos, as well as an 8K reel of the sights of Peru. Colors were vibrant, details were generally clear. My only complaint about its display is that I wish it were brighter -- it was a little hard to read in sunlight.

It's possible that if the Go's screen were brighter, Google wouldn't meet the 12-hour runtime it's promising. That's two hours more than the 10 hours the company said the original Pixelbook would last, although my colleague Nathan Ingraham said in his review that that machine only held up about six hours under his regular workload. At least Google saw fit to add fast charging to the Go, which should get you two hours of juice twenty minutes after plugging it in.

Like on the original Pixelbook, you charge the Go via one of the two USB-C ports. There aren't any other sockets here, barring the headphone jack, so you might want to invest in a hub.

With the right configuration, the Pixelbook Go is a powerful Chromebook clad in an unassuming but functional suit. Best of all, it starts at a much friendlier $649 compared to the original's $999. For that price, the Go comes with an eighth-generation Intel Core m3 processor, 8GB of RAM, a 64GB SSD and a full HD display. You can get a Core i5 processor, increased RAM and storage for more money, though if you want the 4K screen you have to shell out for the most expensive $1,399 model. That configuration comes with a Core i7 chip and a 256GB SSD. Similarly specced Chromebooks from Acer, HP and Lenovo cost about the same, give or take about $100. 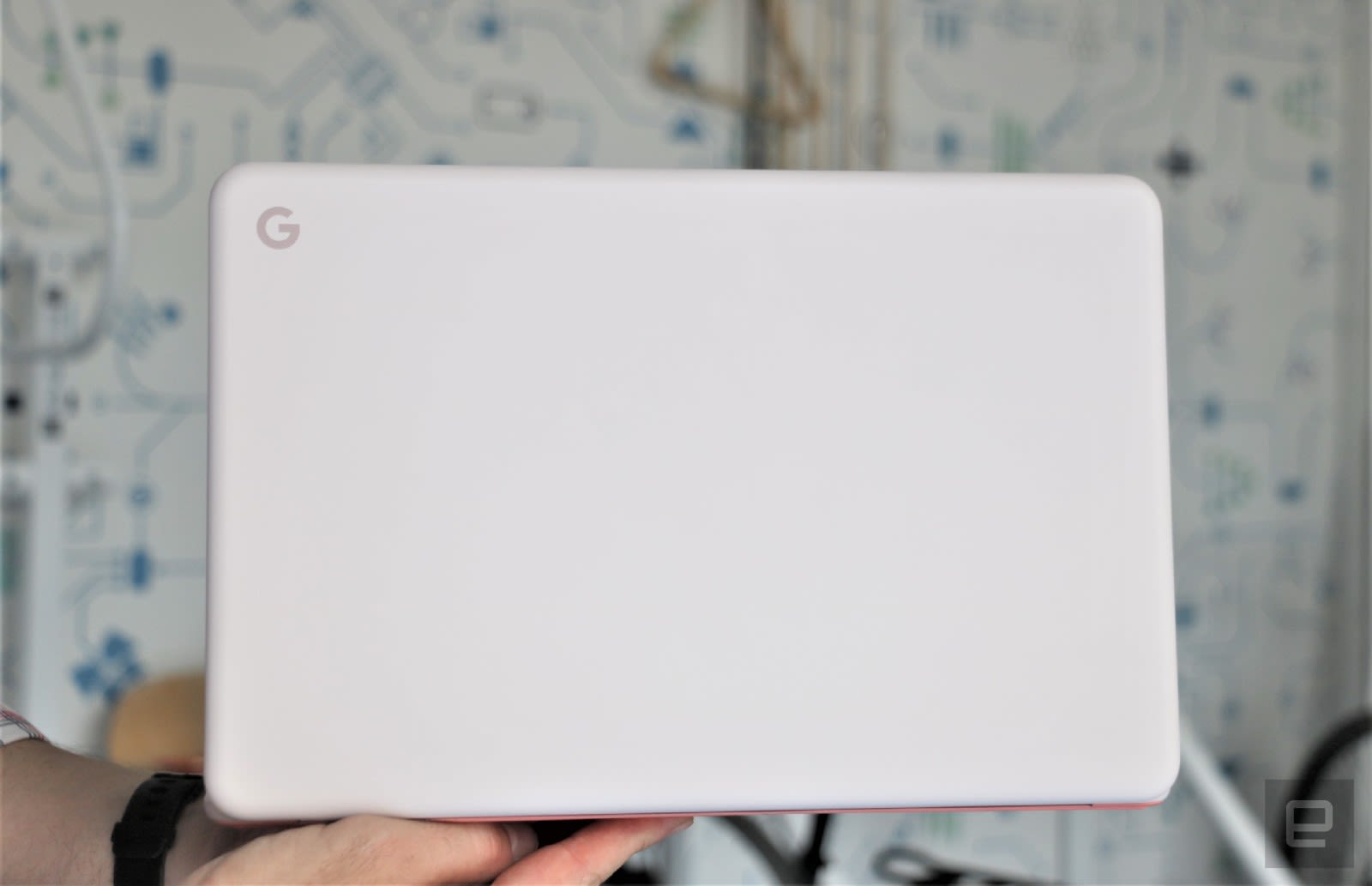 Essentially, if the original Pixelbook was the Ferrari of Chromebooks, the Pixelbook Go is a Volvo -- basic, safe and sturdy. It's nice to see Google drop the Pixelbook's price so drastically, too, but it faces stiff competition from its own partners. In the past year and a half, we've seen premium chromebooks pop up across the industry from brands like Acer, Lenovo, Samsung and HP. Most of them cost between $500 and $600, although Lenovo's 15-inch model comes in at $750. This variety of higher-end Chromebooks gives consumers more options, so if you want a 3:2 screen or a glass-covered machine, you can find one. The proliferation of premium Chromebooks also indicates that the industry is taking Chrome OS more seriously as a desktop platform, which makes it a good time for Google to deliver a Pixelbook that isn't prohibitively priced. You can pre-order the $649 and $849 Pixelbook Go in black today, or join the waitlist for the Not Pink models.

In this article: chrome, chrome os, gadgetry, gadgets, gear, google, personal computing, personalcomputing, pixel4event, Pixelbook, pixelbook go
All products recommended by Engadget are selected by our editorial team, independent of our parent company. Some of our stories include affiliate links. If you buy something through one of these links, we may earn an affiliate commission.