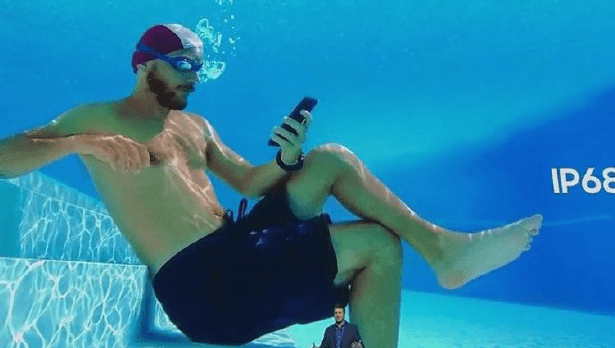 Samsung is being sued by an Australian consumer watchdog over misleading claims in its advertising. The ads showed people swimming in pools and surfing in the ocean with their Galaxy phones, leading customers to think that they could safely swim or surf with their devices.

Despite what the marketing materials implied, Samsung phones can't survive being submerged in anything other than fresh water. On the company's website, it says that the Galaxy S10 series can resist dust and (fresh) water for 30 minutes at depths up to 1.5 meters. Of course, the small print on Samsung's website did say that its Galaxy series phones are "not advised for beach or pool use."

The Australian Competition and Consumer Commission (ACCC) was particularly unimpressed because the issue of water resistance is a big selling point in Australia. A now-removed post on Samsung's Australian website said "Samsung Electronics Australia Vice President of IT and Mobile Richard Fink believes water resistance is something that 'should come standard' on mobile phones released in the Australian market, given our lifestyles."

"Samsung showed the Galaxy phones used in situations they shouldn't be to attract customers," Chair of the ACCC, Rod Sims, said. "Under the Australian Consumer Law, businesses cannot mislead consumers about their products' capabilities."

This comes on the heels of a rough period for Samsung, with the CEO admitting that he pushed the launch of the Galaxy Fold before it was ready, leading to a host of design flaws. The company is also being accused of deceptive advertising about its labor practices. It is facing a lawsuit in France over reports that it employed under-age workers and that conditions in its Asian factories were abusive, despite claims on its website that it adheres to "a strict global code of conduct to all employees" and that it practices "ethical management... [w]ith an aim to become one of the most ethical companies in the world."

Via: The Guardian
Source: ACCC
In this article: ACCC, advertising, consumer watchdog, gear, lawsuits, mobile, samsung, water resistant
All products recommended by Engadget are selected by our editorial team, independent of our parent company. Some of our stories include affiliate links. If you buy something through one of these links, we may earn an affiliate commission.