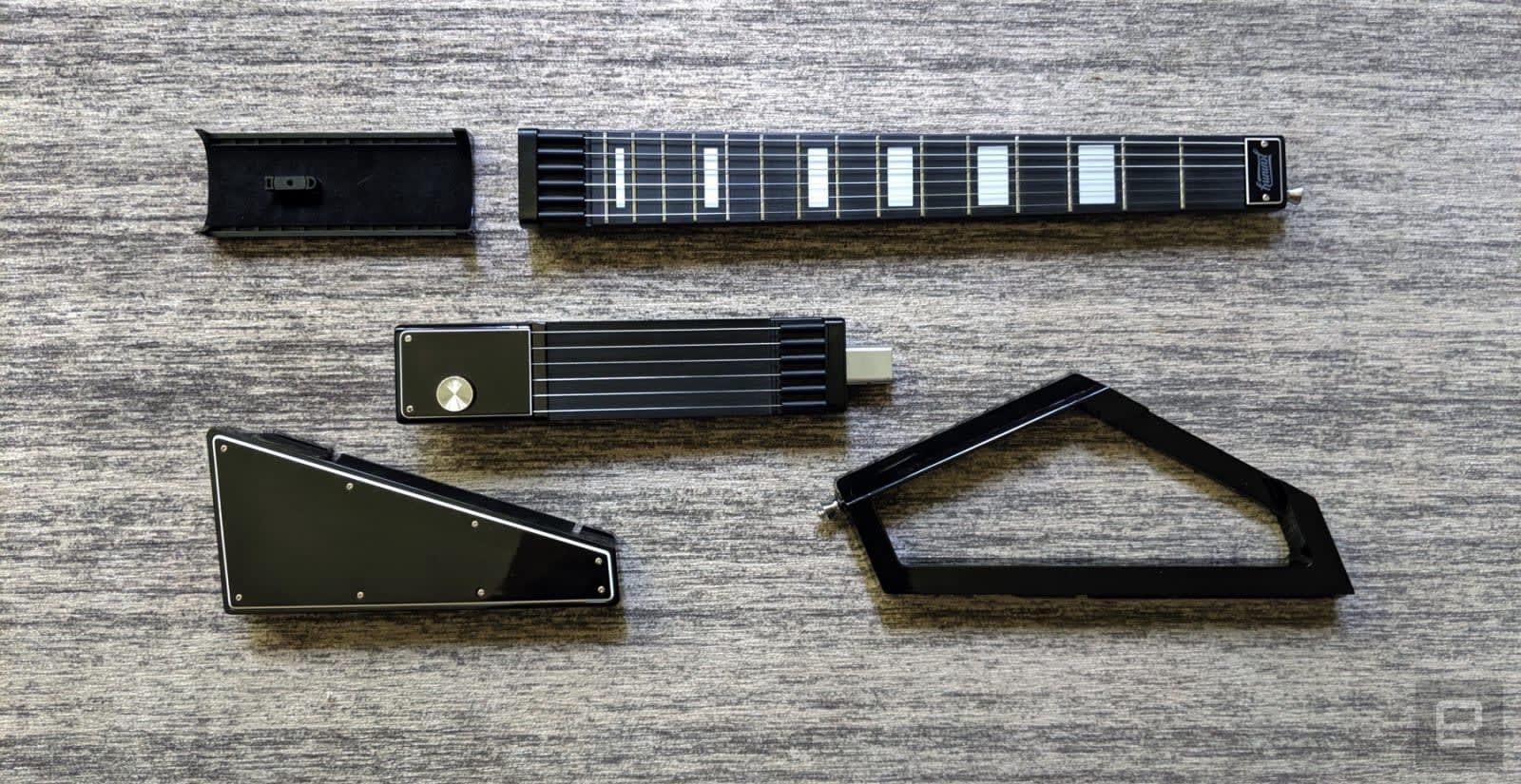 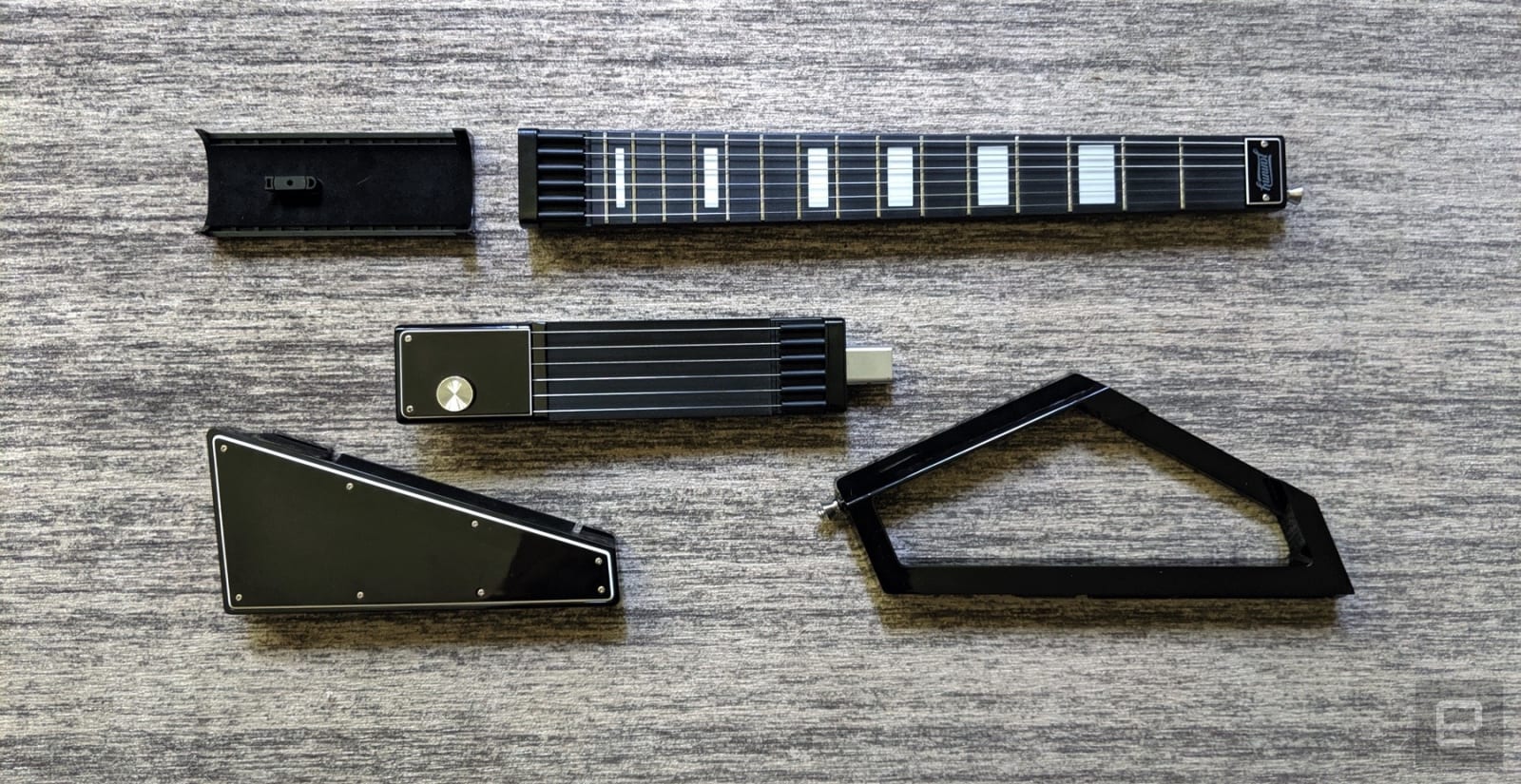 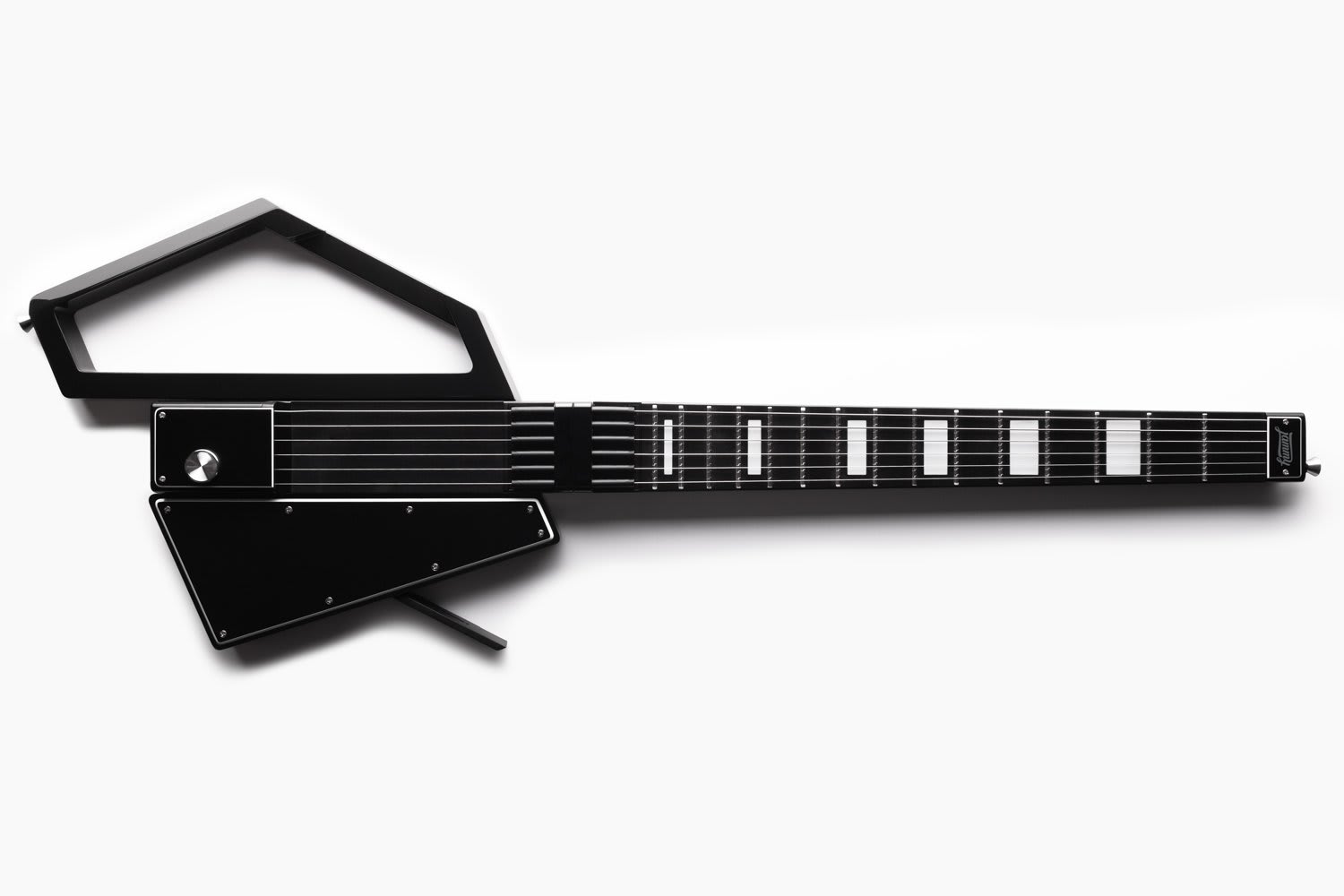 When I was younger I took my acoustic guitar with me wherever I traveled. It's ridden in the back of a van to the Poconos, taken rides down to the Jersey Shore and even flown to the Grand Canyon and Disney World. But it was always a hassle to bring places. It's bulky and fragile. Even if I trusted an airline to treat my guitar with care (which, to be clear, I 100 percent do not), it's prohibitively expensive these days to check something of that size every time you fly. Over the years a number of companies have tried to address this problem, most notably Martin with its Backpacker guitar. But if you prefer your electric guitar and a handful of pedals, then you've been SOL.

This is where Jammy is supposed to come in. It's a portable digital guitar, with actual metal guitar strings, that comes apart and easily fits in a carry-on or even a backpack. You can plug a pair of headphones straight into it or connect to a regular guitar amp. It also has a companion app that allows you to change the sound from acoustic to electric or add effects. What's more, since it's digital, it can never go out of tune! It all sounds too good to be true. And for the most part it is.

Jammy is meant for people who simply can’t go anywhere without their guitar. But those types of dedicated enthusiasts are unlikely to find much to like here. Meanwhile, the $500 asking price is too high for the casual strummer whose money would be better spent on a budget guitar from Fender or Epiphone. While the concept of a digital guitar that you can take apart to stick in a carry-on is intriguing, the technology isn’t there yet.

How would you rate the guitar?
We want to hear what you think. Post a quick review now to join the conversation!
Write a review

Essentially, Jammy is a MIDI controller with built-in sounds. It's not the first guitar-style MIDI controller, but they're not common. There's a good reason for that: They're very hard to do right. There are a lot of moving parts, and the way in which a guitar is played makes it much harder to track and translate into machine-friendly data than, say, a keyboard. And it seems like the team at Jammy ran into a lot of the same problems that everyone else has had over the years, from Casio to Roland to Jamstik. 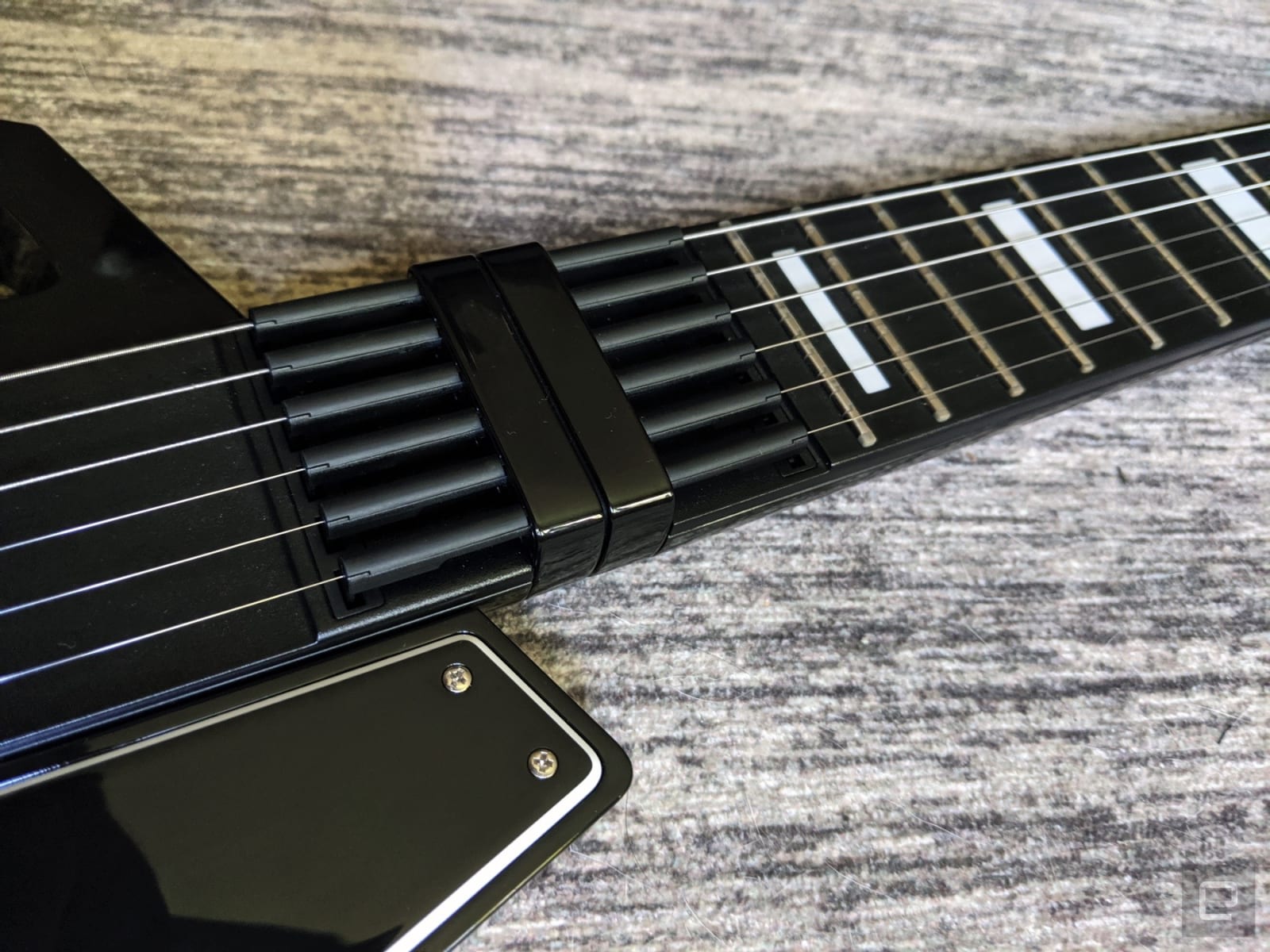 The tracking on Jammy and its ilk just isn't good enough to satisfy the kind of person who can't leave their guitar at home. Strum a few open chords or pick out a simple, midtempo melody and you might not have much of an issue. But the moment you start trying to incorporate slides, bends, hammer-ons or pull-offs or play anything faster than, say, 120 bpm, you're going to run into trouble.

My Jammy sometimes fails to detect my picking, especially on the low E string. Even when it does initially register a note, occasionally it abruptly cuts off, leaving nothing but uncomfortable silence in its wake. I was able to improve things by diving into the settings and changing the muting sensitivity. But part of the issue is that guitar-style MIDI controllers are not very forgiving. Tiny imperfections in your playing might go unnoticed on a real guitar, but here they become showstopping problems as notes fail to ring out or the wrong ones come through loud and clear.

This is made all the more problematic by the fact that Jammy just doesn't sound natural. It's essentially playing back samples, which creates this weird gated effect, especially on the electric guitar sound. There's an audible background hum when notes are playing that simply vanishes when they stop ringing out. And if you bend a note, the digital pitch-bending effect is so harsh and unmusical that it's almost comical. It ends up sounding less like a real guitar and more like a mid '90s robot impersonating a guitar.

Jammy vs a real guitar (no talking)

For this video I played both the Jammy and my Fender Toronado through a Yamaha THR10 amp, with the same tone settings. They were recorded using a Blue Microphones Ember plugged into a Roland Go Mixer Pro connected to my phone.

But let's take a moment to acknowledge that some of what Jammy has accomplished is legitimately impressive from a technological standpoint. That this thing can register hammer-ons, pull-offs and bends at all is pretty cool (even if it doesn't do so reliably). It can sense palm muting too, for when you want to get your metal chug on. And the latency is impressively low; when you pluck a note, it sounds immediately, with little to no perceptible delay. This is something I've heard complaints about with the Jamstik, though having never played one myself, I can't confirm how serious of an issue it is.

Unfortunately, its being technologically impressive doesn't actually mean it's enjoyable to play. And you're only going to make things worse if you try to use the app's built-in effects "pedals." They sound... rough. They're cold and digital, and not in an enjoyable way. The distortion in particular is thin and sounds more like a bit crusher than the Boss Metal Zone its graphics are based on.

Even the areas where Jammy more or less succeeds come with caveats.

First off, Jammy is incredibly light and portable. Getting the whole frame together can take a little finagling, but it's hardly rocket science. Fully assembled and with a strap it weighs only three pounds. The largest piece is the neck, which measures 17 inches long. And if you're cool with just the neck and bridge portions (which can be a little more awkward to play), you can easily toss this in a backpack.

But being light and modular creates some trade-offs. The plastic fretboard and frame feel cheap, like a toy guitar you'd give a child. And since the strings on the neck aren't connected to the strings you strum, you lose some tactile feedback that's useful for feeling your way through a riff.

Jammy also makes for a surprisingly decent MIDI controller when hooked up to a computer. While I can fake my way around a keyboard and am getting more comfortable with a pad controller, I'm most at home with a guitar. So being able to pick up Jammy, strum a couple of chords and coax some harmonically rich synth pads out of Ableton Live is great. But the same caveats apply here as they do when using it as a guitar. Even if your playing is clean and precise, there may be tracking errors. It's just that you're probably not going to break out the same flourishes for your synth lead as you are for your guitar solo. So you're a little less likely to run into the same frustrations.

I did occasionally get a stuck note when using Jammy as a MIDI controller in Ableton Live. After I'd play a chord, one note would continue to ring out and wouldn't stop until I played the same note again but on my keyboard controller. That said, a recent firmware update seems to have fixed this bug, thankfully.

The app is also mostly a success. It's loaded with features like backing tracks for playing along to (it even displays the scale you should be soloing in), a metronome and one-touch tuning for when you want to switch from standard to open G or drop D. This is also where you customize your sound. You can switch between acoustic and electric or build out a virtual pedal board. But the interface for building and choosing those pedal presets is a little clunky. And as I mentioned earlier, they don't sound so great. 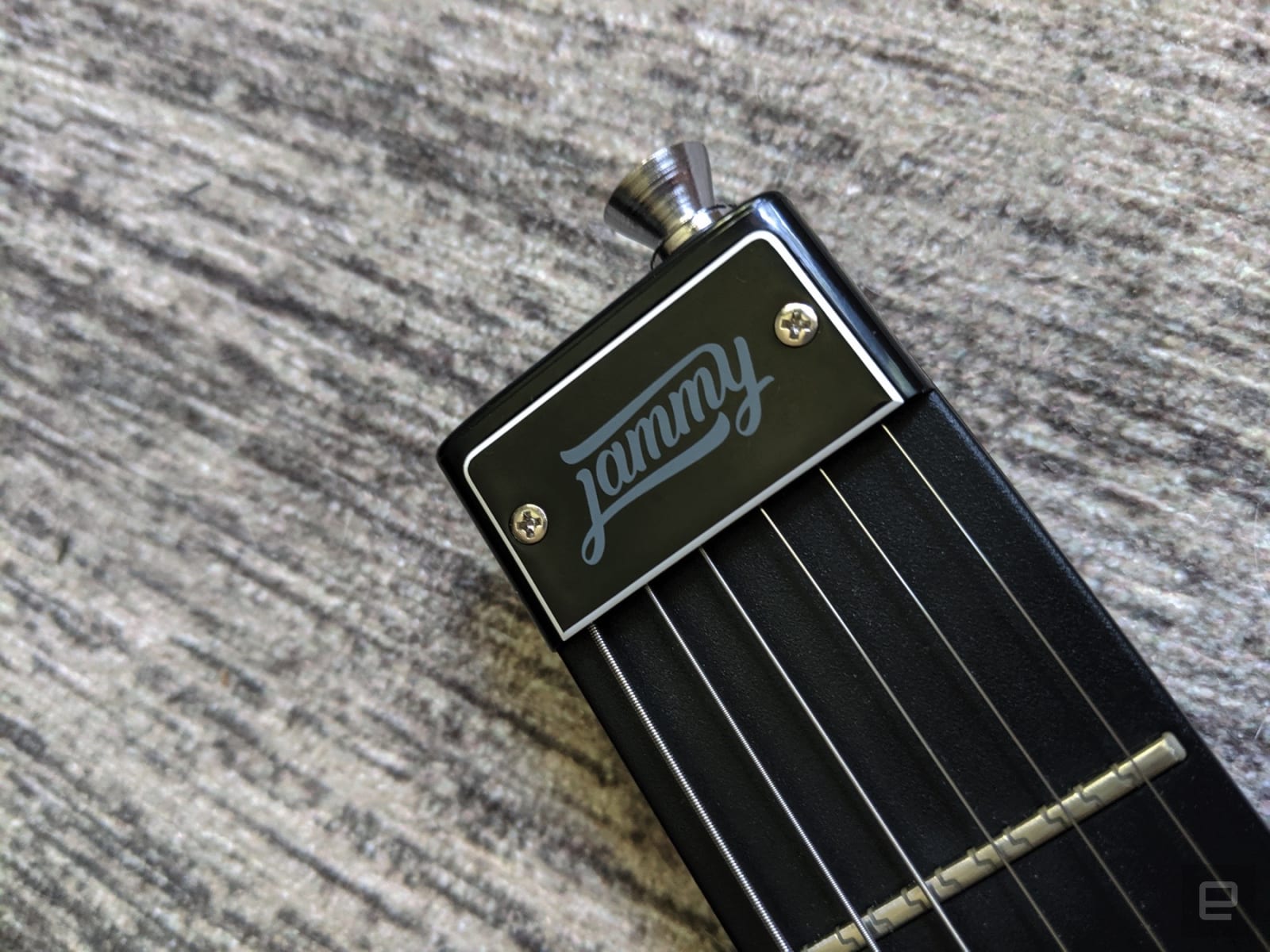 During the course of this review my unit received multiple firmware updates, and each one improved things slightly. But at the end of the day Jammy is an interesting musical curiosity, not a practical solution for getting your guitar fix while on the road. It's simply not reliable or realistic enough to satisfy the sort of axe addict who's going to want to throw a guitar in their carry-on. If you're cool with staying unplugged, a Martin Backpacker guitar is still probably your best bet for jamming on the go. And at $500, Jammy is way too expensive to recommend to a beginner, whose money is better spent on a budget electric or acoustic from the likes of Fender or Epiphone. It's a great concept, but the technology isn't there yet.

In this article: art, av, gadgetry, gadgets, gear, guitar, jammy, midi, midi controller, music, musical instrument, review, video
All products recommended by Engadget are selected by our editorial team, independent of our parent company. Some of our stories include affiliate links. If you buy something through one of these links, we may earn an affiliate commission.