Including all of the S20 camera details you need. After weeks of leaks, Samsung officially revealed its Galaxy S20 series at its Unpacked event today. The company also shared its next attempt at a foldable phone, the Galaxy Z Flip, and had a lot to say about its new camera tech.

If you've been looking for more 5G support and improved camera performance, the Galaxy S20 series might be for you. The lineup includes three models (the 6.2-inch S20, 6.7-inch S20+ and the 6.9-inch S20 Ultra). Each will support "lightning fast 5G" -- though Samsung will offer a 4G version in some countries.

The S20 has a triple camera setup on its rear, and the S20+ and S20 Ultra have an additional depth sensor. The cameras include a 12-megapixel "Ultra Wide" option with a 120-degree field of view, a 12MP sensor with a 79-degree field of view and f/1.8 aperature, plus a 64MP telephoto with an aperture of f/2.0. All three phones use a combination of 3x hybrid optic zoom and software to allow a 30x zoom on the S20 and S20+ and a 100x zoom on the Ultra. 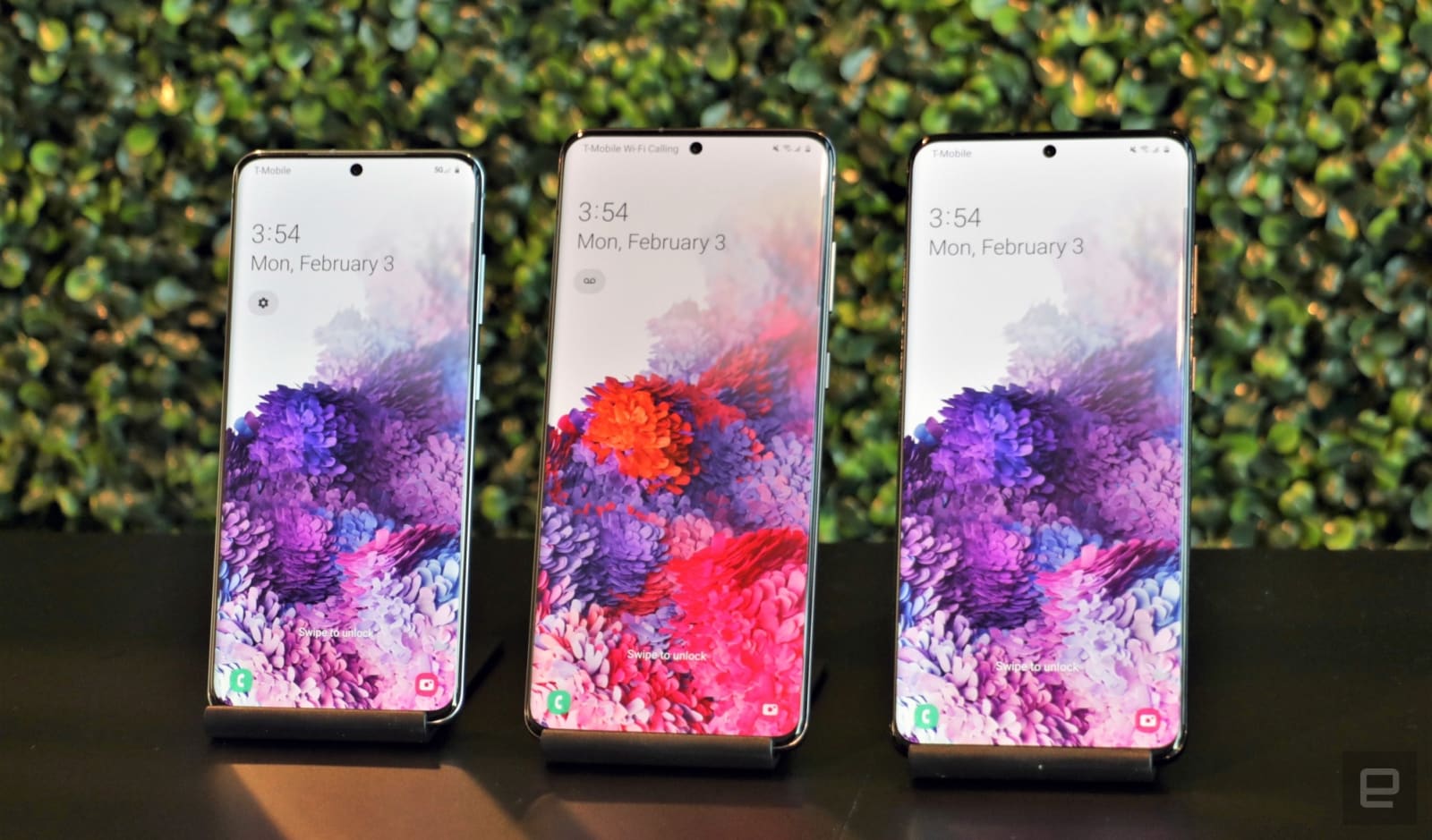 The Galaxy S20 models feature panels that run at 120hz, at 1080p, and you can tweak the refresh rate to find a speed and resolution balance that works for you.

Samsung's next attempt at a foldable phone is the Galaxy Z Flip, which looks an awful lot like Motorola's recently-revived Razr. The phone has a giant 6.7-inch screen when it's open and a three-stop hinge, which allows it to open at three different angles, rather than open and closed. 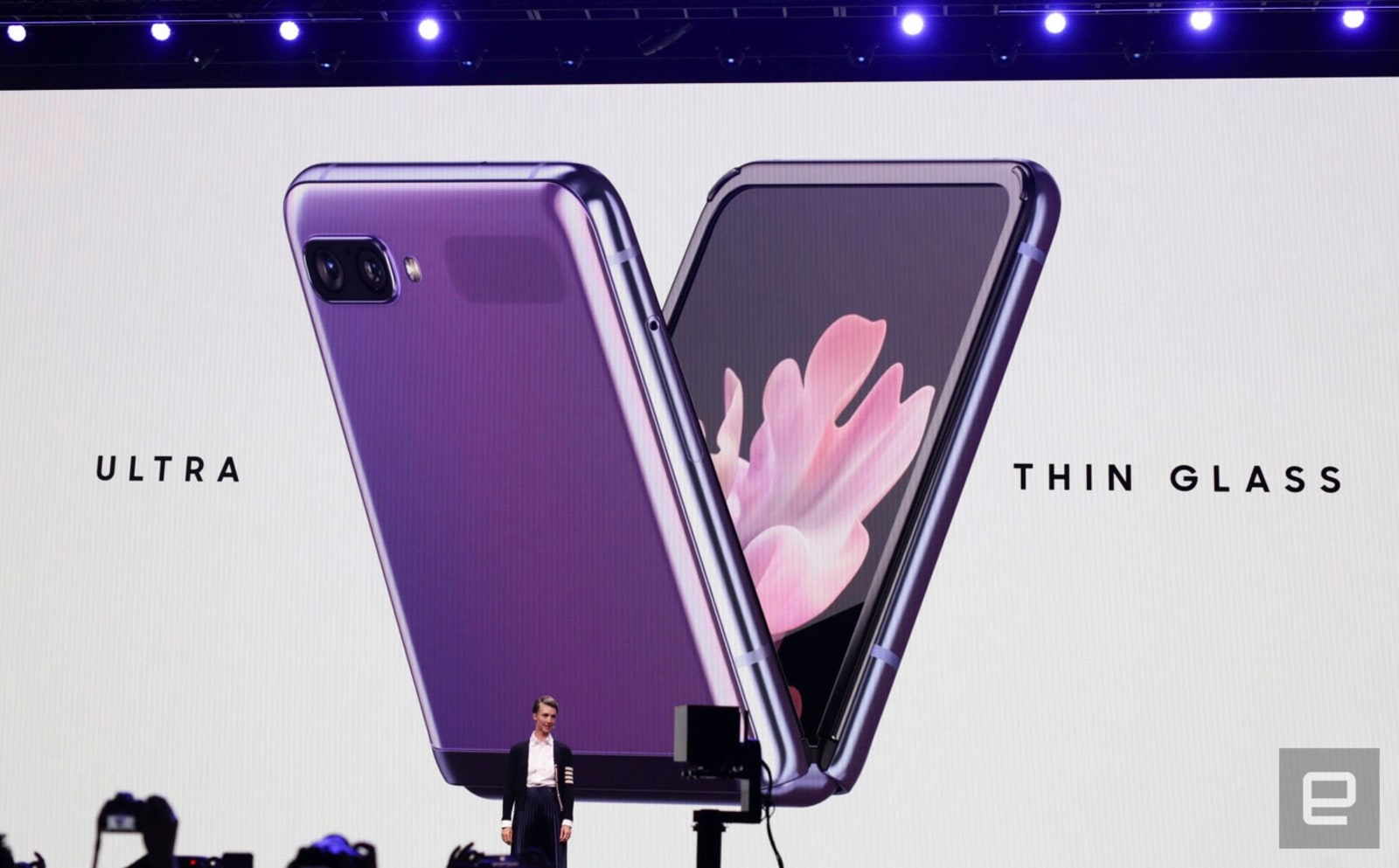 The Galaxy Z Flip will be available February 14th for $1,380, and Samsung says this time it used glass, rather than plastic, to protect the screen, so it shouldn't run into the same problems the Galaxy Fold experienced.

Since users don't just use their cameras for photos, Samsung is also taking steps to improve the video chat experience. It has partnered with Google to bring Duo video calls directly to the Samsung dialer. Users will simply tap Duo to start a video call in Full HD, with up to eight friends. Samsung said it's bringing Duo to the Galaxy S20 phones first, which we hope means it might arrive on older devices eventually. 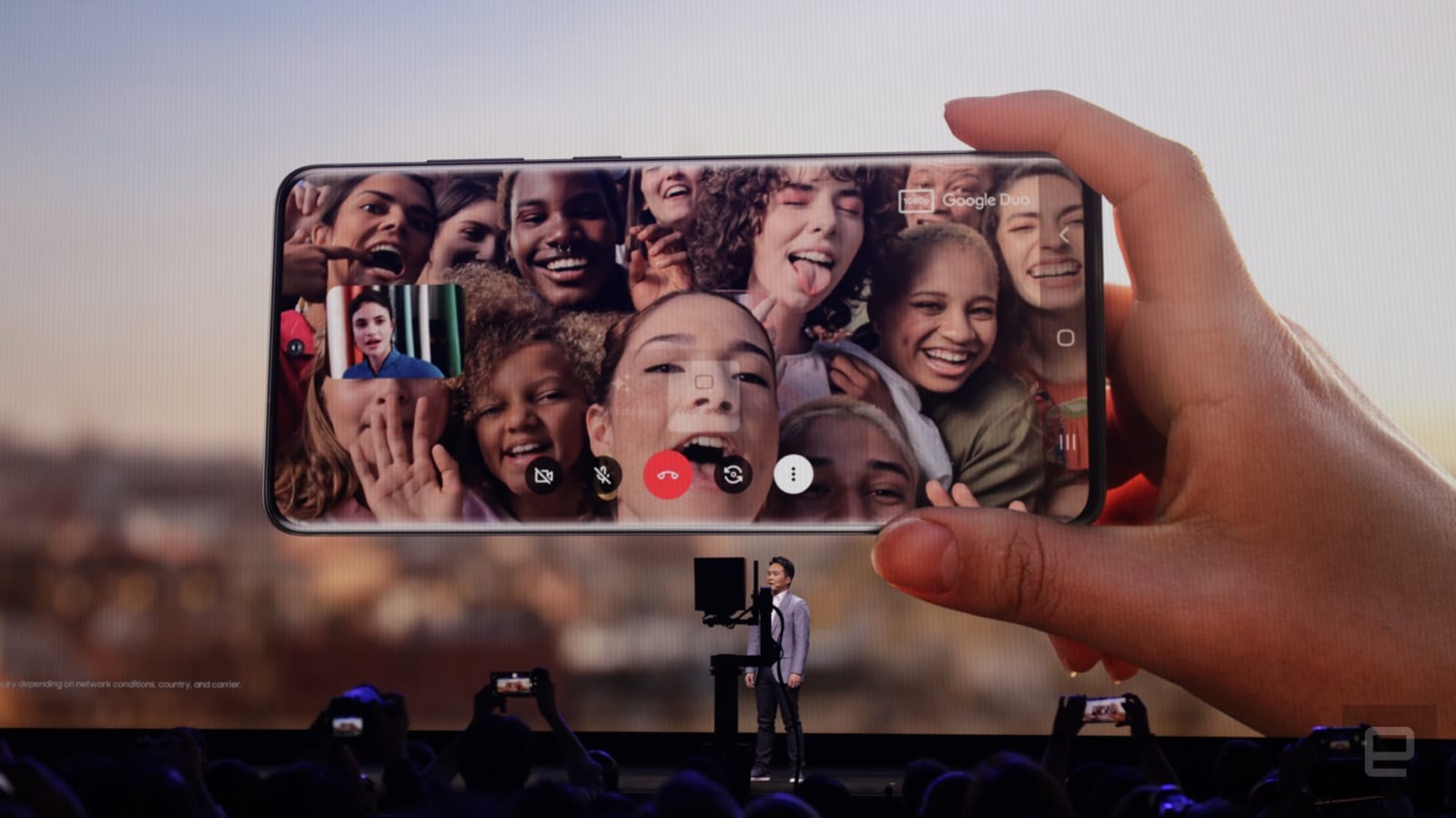 Samsung had already leaked everything you need to know about the Galaxy Buds+ ahead of today's event. The biggest change is that the Galaxy Buds+ up the battery life from six hours to 11 hours. Supposedly, Samsung has made changes to audio quality, and it has added a Spotify button. Unfortunately, the Galaxy Buds+ still don't have active noise cancellation (ANC).

The Buds+ will be available on February 14th in white, black, red and blue via Samsung's website for $149.99. You can pre-order them now, and they'll arrive at other retailers in March. 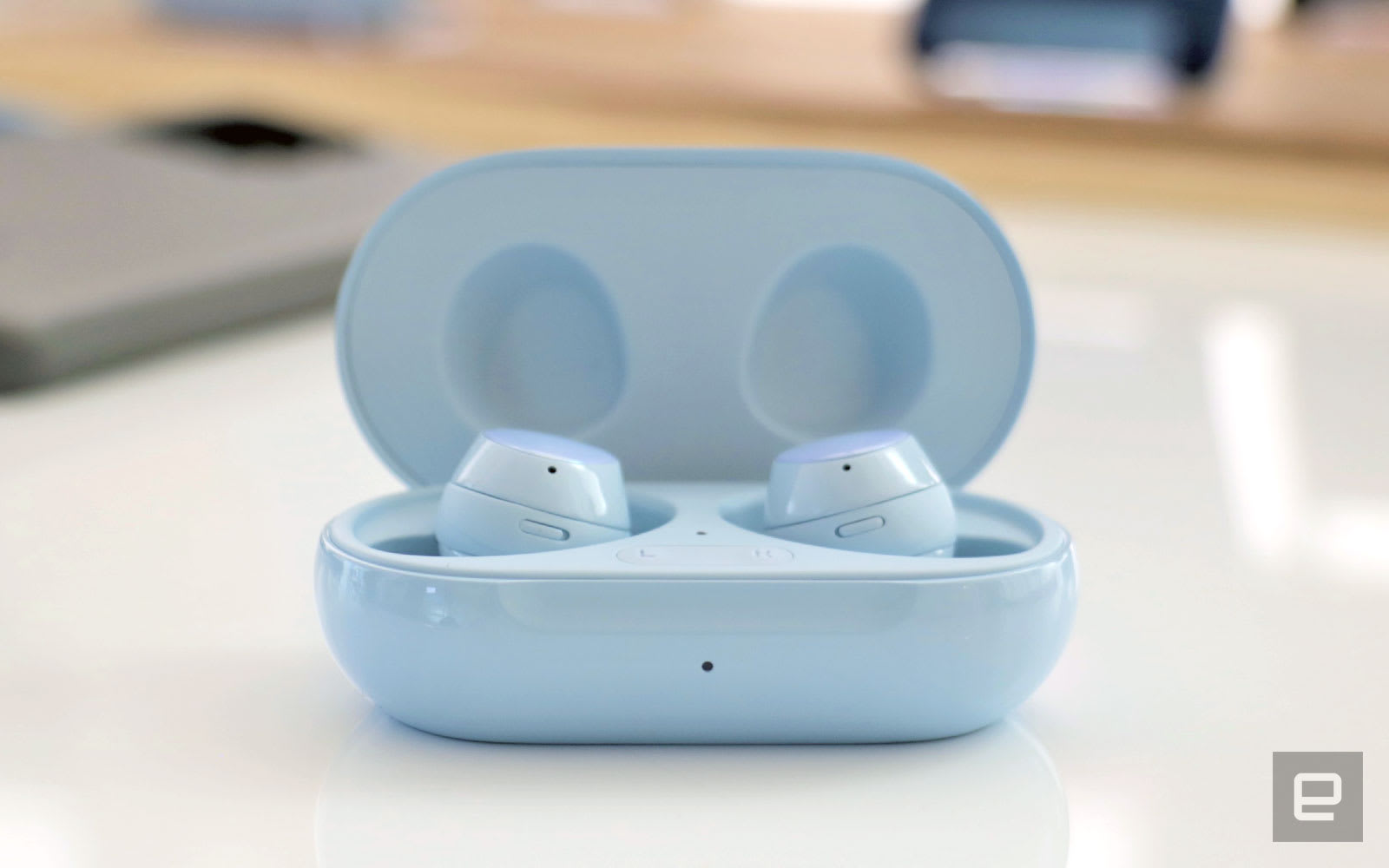 Samsung will make the free-to-play racing game Forza Street available on its Galaxy devices. This is the first time a Forza game will be available outside of PC and Xbox, and it could help showcase the 120Hz refresh rate on the S20 phones. 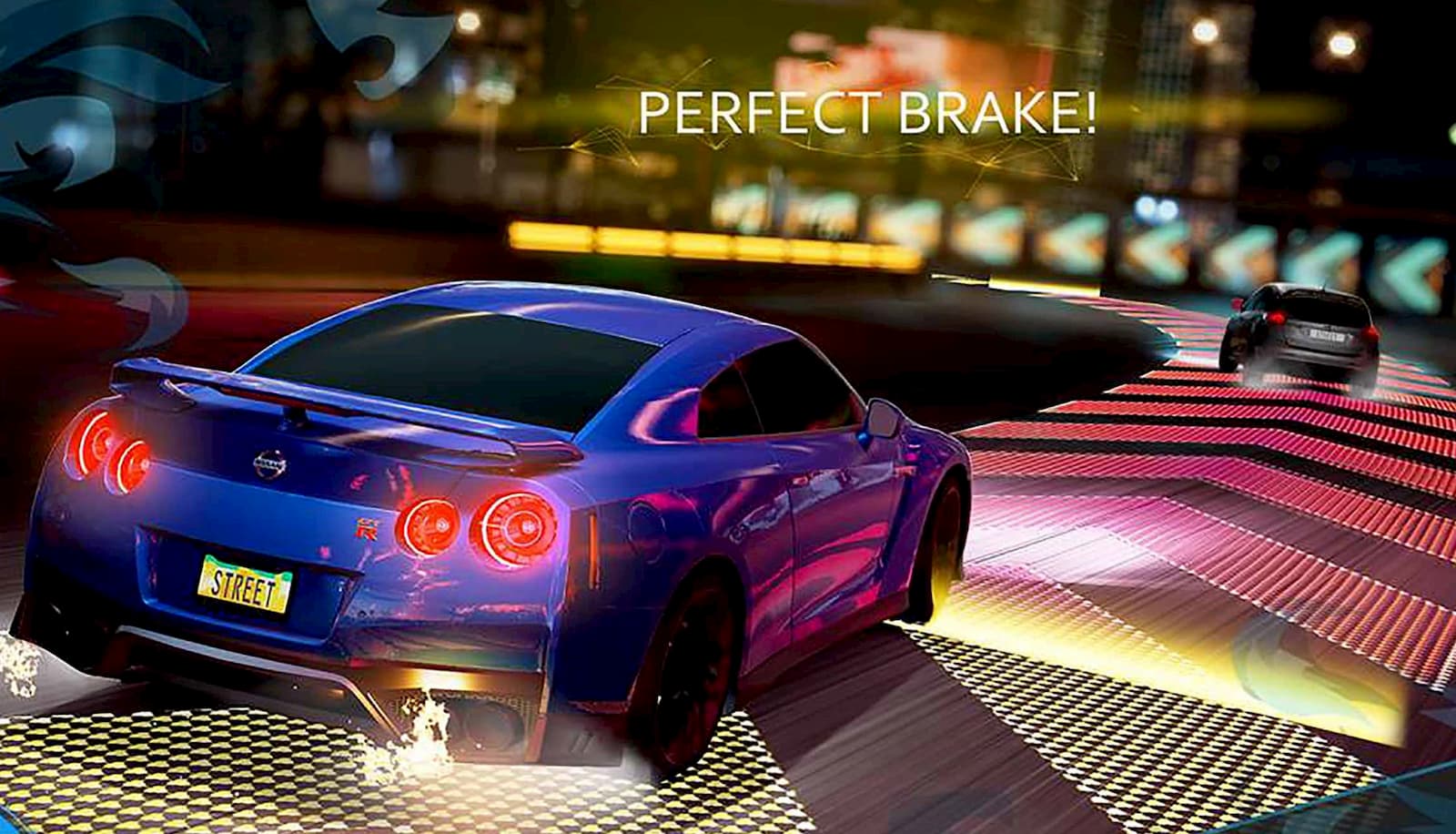 Samsung's former flagship phone, the S10 series, is already on sale. The S10e now costs $599, while the standard S10 is $749. If you want the larger S10+, that will cost you just $849. If you can live without the very latest hardware (including the S20's larger screens and advanced cameras), these deals might be appealing. 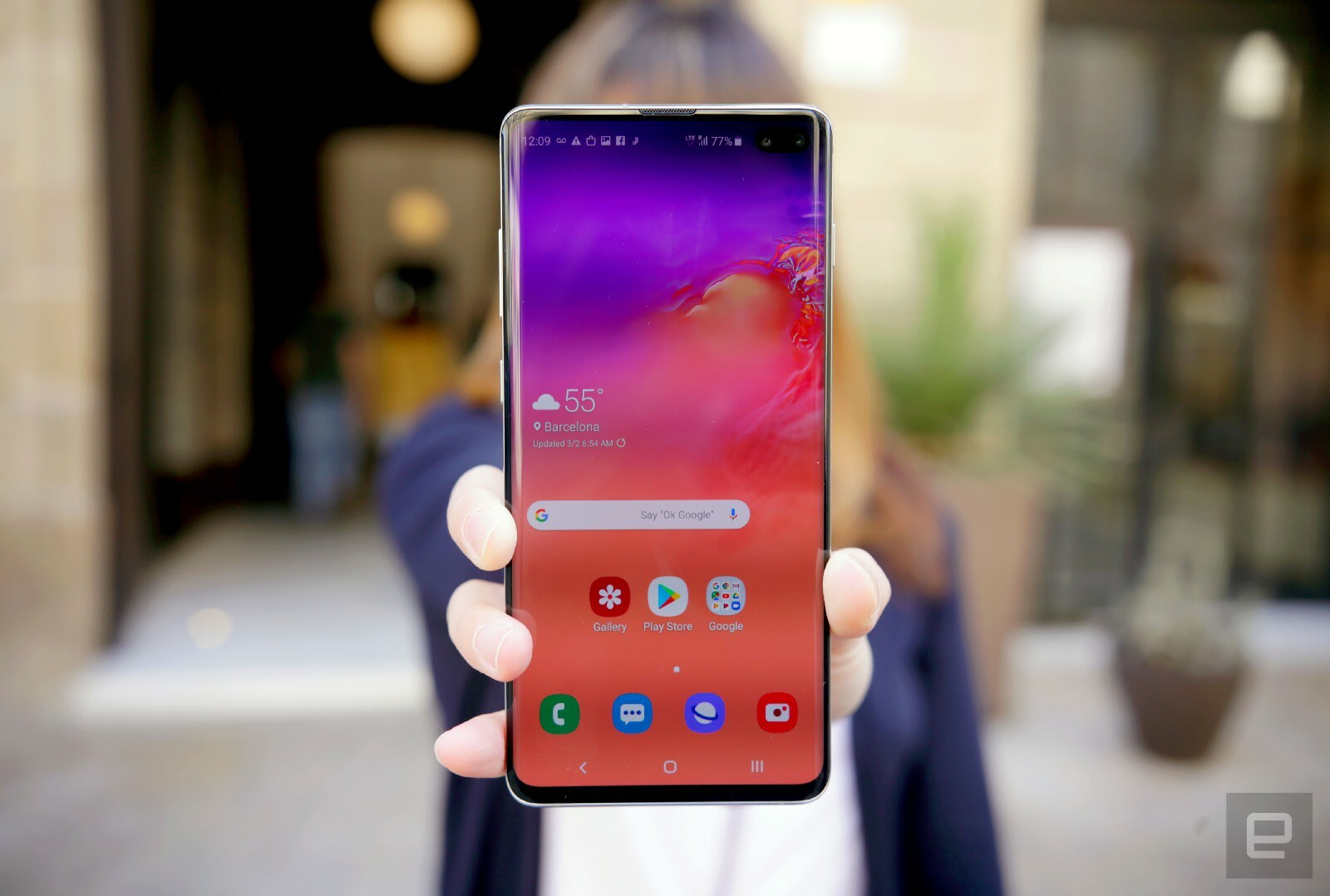 All products recommended by Engadget are selected by our editorial team, independent of our parent company. Some of our stories include affiliate links. If you buy something through one of these links, we may earn an affiliate commission. All prices are correct at the time of publishing.
Here's everything Samsung announced at its Galaxy S20 event
5g
camera
cameras
duo
forza
gadgetry
gadgets
galaxy
galaxy buds+
galaxy z flip
gear
mobile
roundup
s20 ultra
s20event
samsung
samsung galaxy
services
video calls