Both headsets are said to feel very much like 'normal glasses.'
R. Lai|02.20.20
@richardlai

While HTC is betting its VR future on the modular Vive Cosmos for now, it's also been working on next-gen lightweight headsets, under the title "Project Proton," that CEO Yves Maitre said will resemble "really, really close to normal glasses." Well, judging by the renders we received, this is debatable, but these wearables certainly seem more compact than the current crop of VR devices.

In a statement sent to Engadget, a company rep said "Project Proton is a prototype of a future XR glasses-style device from HTC Vive that we hope to hear feedback on from the community as we continue to work on the product." We have absolutely no info on specs, but Project Proton does confirm HTC's intention to shift focus to mixed reality use cases, as well as adding 5G connectivity -- be it internal or external -- to its future headsets. 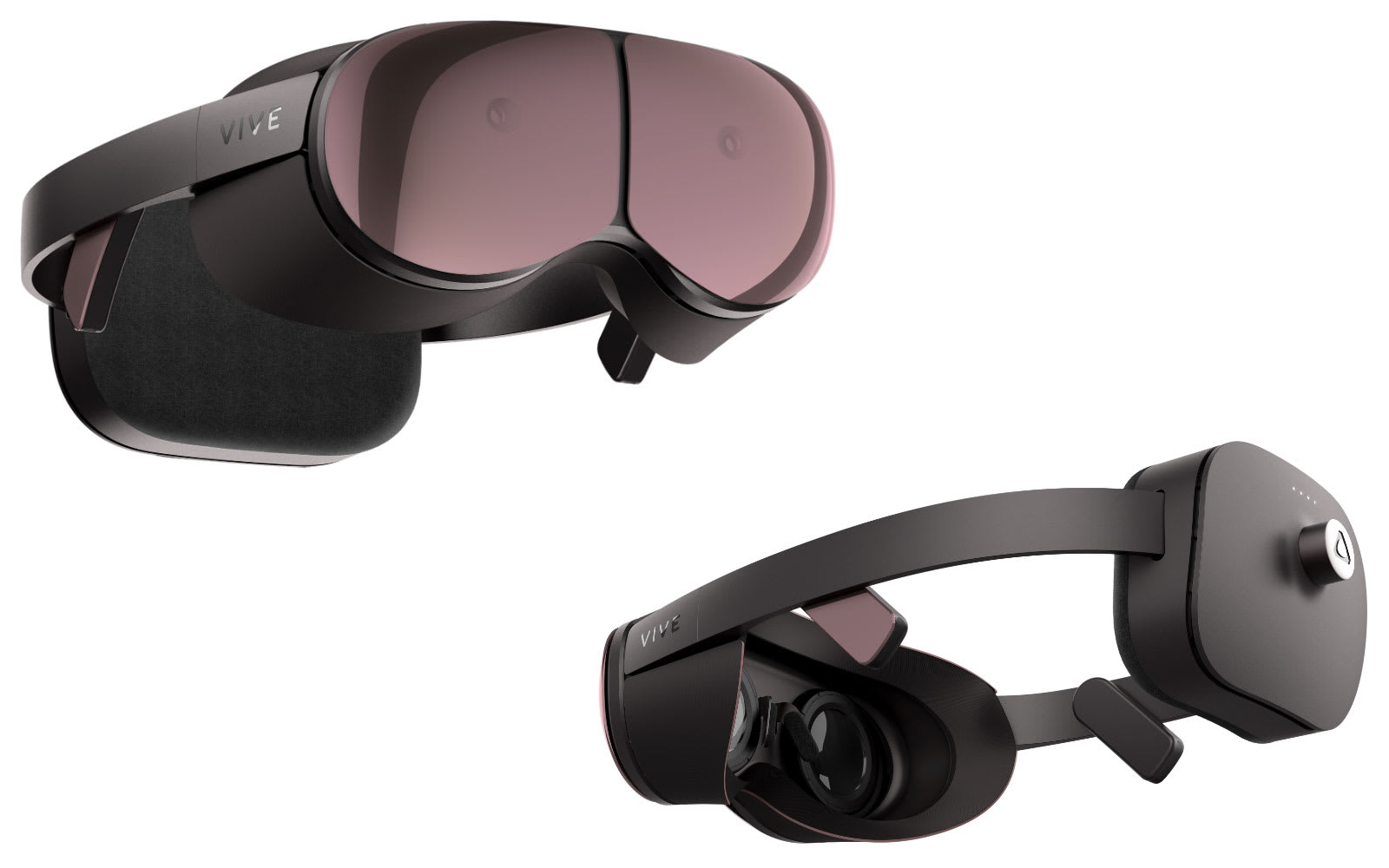 Project Proton covers two form factors: an all-in-one headset which we shall call "Proton AIO" for now, and an "all-in-two" headset which we shall nickname "Proton Glass." Upon closer look, both headsets appear to feature stereo front-facing cameras which are likely for inside-out tracking, though it's also possible that these will be used for passthrough view of the outside world. The visors are insanely slim, so both headsets should weigh noticeably less than current devices, plus they will less likely hit the wall or be hit by one's controllers, if any. That said, it's unclear how much of an impact this will have on the field of view.

Unlike the Vive Focus, the Proton AIO's processing unit appears to be housed on the back of the head strap, which further reduces the size of the visor while offering a better weight distribution. There are also two dongles which are likely headphones that hover over your ears. My current worry is that while the processing unit offers a large piece of cushioning on the back of one's head, it could spell trouble for sweaty users (such as yours truly) after an active session. Hopefully HTC will find a way to mitigate this issue. 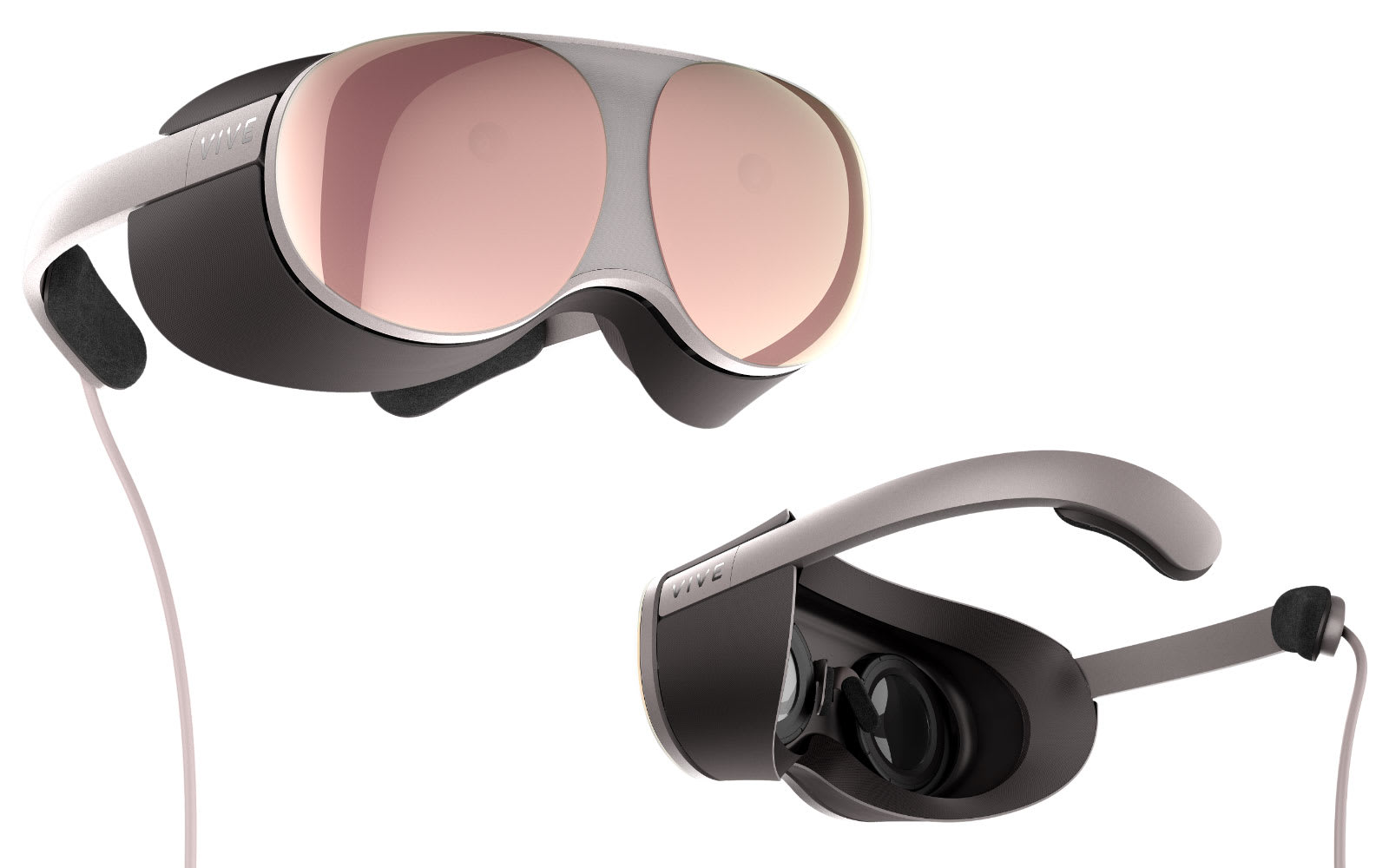 As for the Proton Glass, it's designed to be powered by an external processing module such as a smartphone, which is why it can carry temples that resemble those on thick-frame glasses. Think of it as a somewhat direct competitor to the Nreal Light, except it can do VR for a more immersive view. Given the apparent lack of speakers, it's unclear where the audio will come from -- maybe just the good ol' plug-in earphones.

Even though there are still many questions in the air, this is a hopeful path for HTC, especially after the stalemate VR headsets have been in for the last few years. We're still unsure whether the modular Vive Cosmos series will help HTC much against the increasingly versatile Oculus Quest and the powerful Valve Index, but with newfound portability and capabilities in Project Proton, it would be interesting if HTC could end up outdoing, say, Magic Leap after all its hype. We'll be keeping a close eye on these two prototypes as they make further progress.