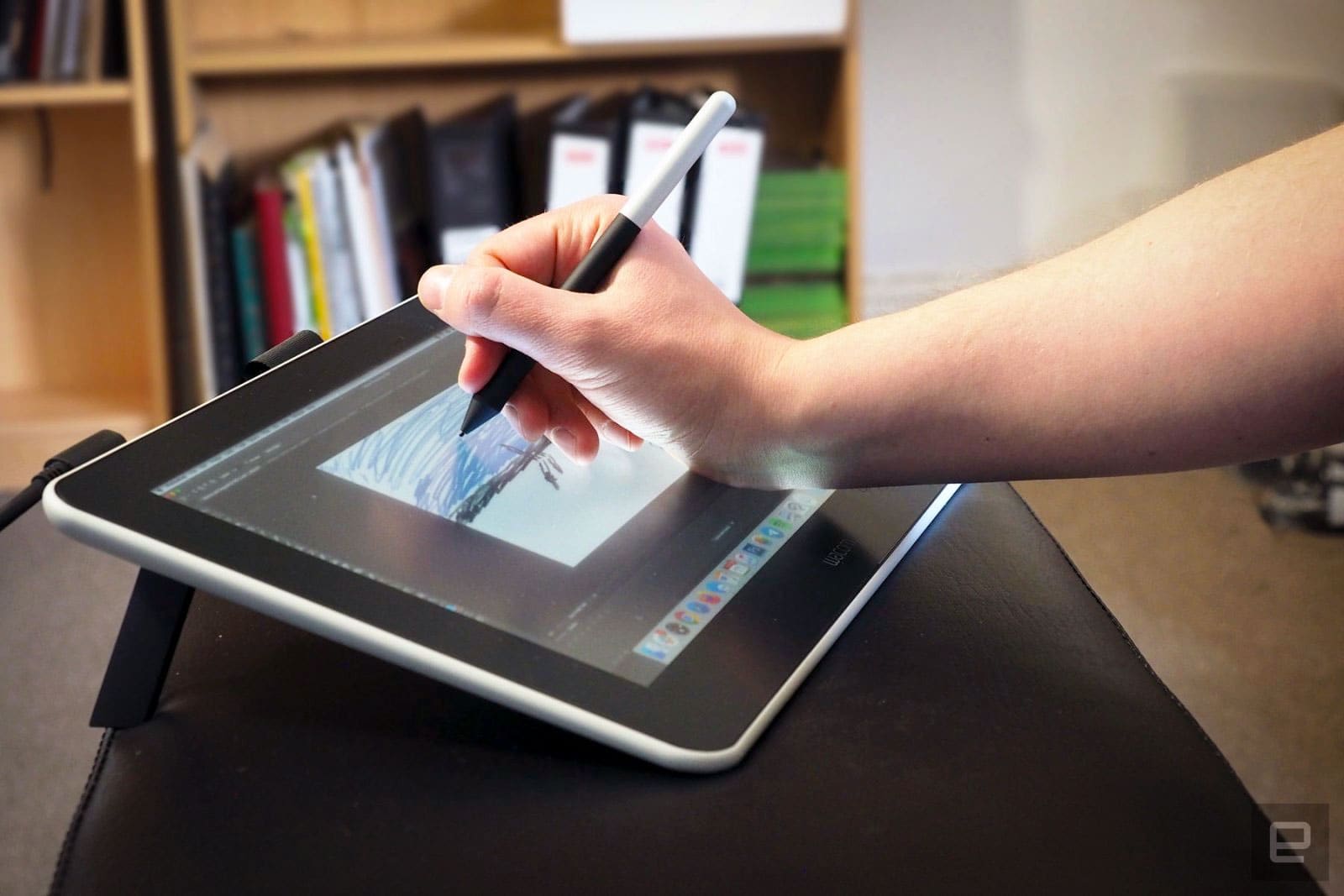 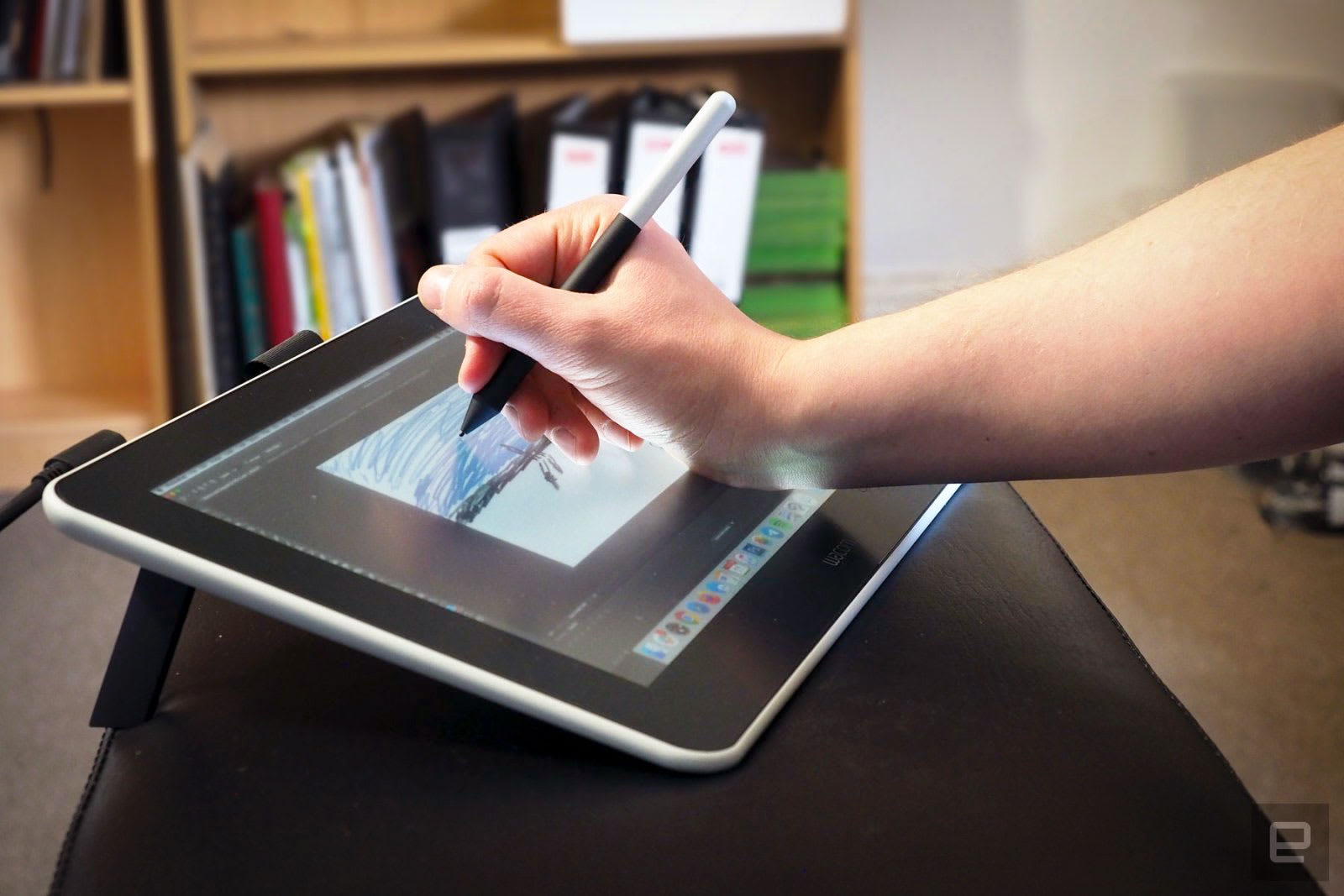 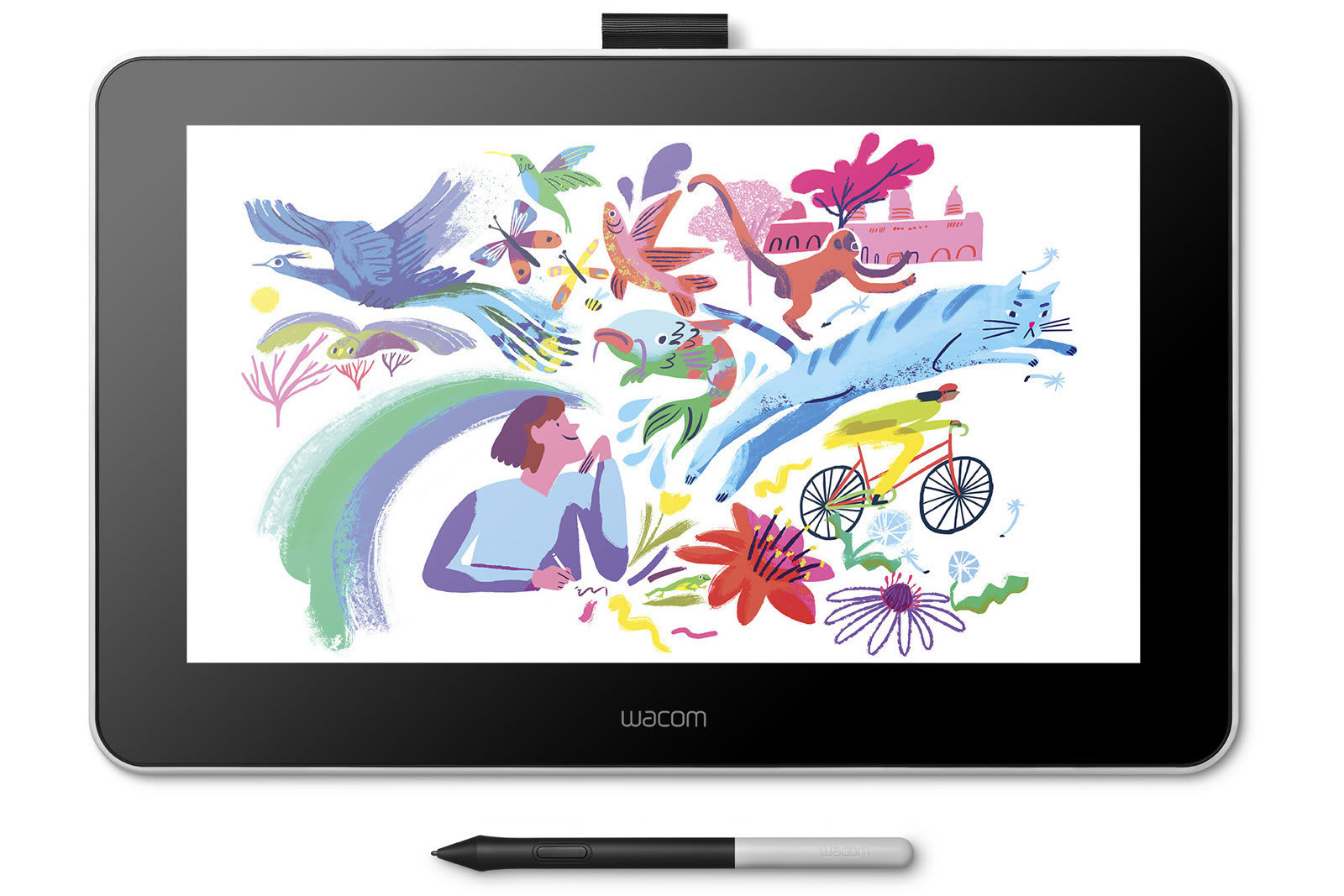 The Wacom One is a $400 graphics tablet designed for folks used to editing pictures and video on mobile devices. Teens looking to up their Snapchat game, YouTubers and would-be digital artists who want the functionality of a Cintiq, but at iPad prices. It still has the same baggage as other Wacom devices, more on which later, but at a fraction of the cost.

A stripped-down graphics tablet for beginners, the Wacom One takes most of what’s good from its pricier models and shrinks it down. It’s fun to use, but there are some omissions, like shortcut keys. You could still easily use this for half-serious work if you needed to. Professionals may find it too much of a step down, but it’s not designed for them.

Be the first to review the One?
Your ratings help us make the buyer’s guide better for everyone.
Write a review

Because Wacom's newest device is for amateurs, it made sense for an amateur to review it. After all, no professional designer currently using a Cintiq is going to step down to a budget device unless it's truly compelling. Which is why I'm trying it out rather than any of the professional designers on staff, who may see it in a very different light.

At first blush, it's clearly a Wacom tablet, with a generous (some may say chunky) bezel and soft, round edges. The design wants you to rest your forearms on, and over, it on the regular, so it can't be all be razor-sharp edges and jabby corners. It'll never draw coos on your fancy designer's table and Marcel Breuer chair, but it is comfortable to hunch over.

The 13.3-inch, 16:9, 1,920 x 1,080 AHVA display has a matte AG film coating, which makes it feel a bit like a very old Android tablet. It's compatible with Wacom's passive styluses -- not your fingers. However, it does work with third-party devices that use the same tech. That includes digital pencils from Staedtler, Lamy and, amusingly enough, Samsung's S-Pen.

The Wacom One's color gamut -- which is the colors it can display -- is up to 72 percent NTSC / 99 percent sRGB. That's fine for the majority of people who may be doing online publishing and photography work. If you've never heard the terms, then worry not, as I'm mentioning them purely for completeness' sake. If you're working with high-end print or only ever think about Adobe RGB, you're not going to buy this device.

This is very much personal preference, but the matte anti-glare film and the relatively weak backlight (200 nits) grated on me. Weak backlighting is something Wacom does, again, because it expects your head to be close to the screen, but I would have loved to boost it now and again. I'm unique among my colleagues for liking to work in brightly lit rooms with my screen brightness turned fairly high, though. 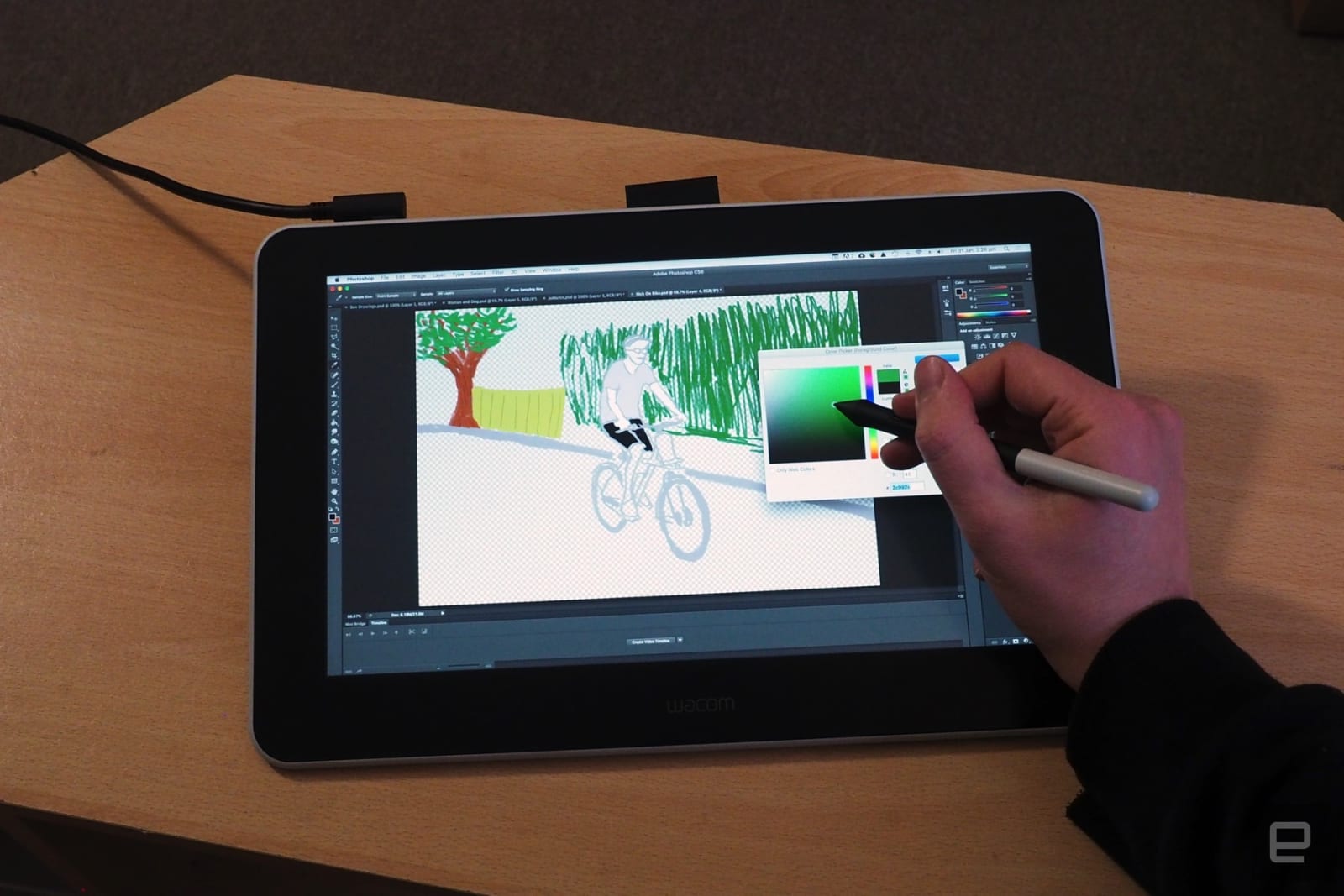 Wacom's moving away from shortcut buttons on its drawing devices, and there aren't any here. If you're used to or want key bindings, you'll need to buy a separate $100 Express Key remote. As a digital native, I didn't mind the lack of keys, but did find I had to spend lots of time using keyboard shortcuts to get around.

The only major hardware feature beyond the screen are the legs, which flip out to fix the One at a 19-degree angle. That's the only adjustment you can make, unless, you know, you've got one of those deluxe drawing tables, or buy one of Wacom's fancy stands. You can use the One as a second display for your computer, but with that fixed 19-degree angle, it's not really made for it. Instead, I set it up as a mirrored display and set up the One on a makeshift table beside my standing desk.

Under one of the device's legs, there's a small slot, which houses three replacement nibs for your stylus. As well as the stylus, the Wacom One comes with a single four-way cable, with USB-C to connect to the One, two USB-A (one for power, one for data) and an HDMI-lead to the graphics card. You can either power the slate with a wall connector or with a second USB-A port on your computer. Although, since USB-A is being phased out of most laptops, this may not be a long-term option.

Wacom is making a big deal that you can use the One with a handful of Android phones for content creation on the go. That was how I first tested the One out at CES last month, but it's not very elegant. Because of the sheer number of cables you need, you'll have to connect the One to the phone via a USB-C hub.

Once connected, though, setup is a doddle: You can get going after you've just downloaded the driver and registered the hardware. That'll also give you access to a couple of free trials, including three months for Clip Studio Paint and two months free Adobe Premiere Rush. If you're a Windows user, you also get Bamboo Paper and pro-pack features for free.

It took me less than ten minutes before I was running Photoshop and sketching like I worked in a creative agency named after a citrus fruit. There's that feeling you get when you're sketching with a device like this that just encourages you to feel liberated. For me, working with paper always feels like you're putting pressure on yourself to do a good job. All it takes is one over-hard scrape with a pencil and no amount of erasing will get rid of it.

But with a device like this, I can just open up a new file in Photoshop and start sketching, with the freedom to screw around as I care. I keep meaning to try to follow along with a Bob Ross video on YouTube, but I was somehow too intimidated to do so before writing the review. Mostly because you watch those professional artist clips and think that if I do it too early, I'd be too traumatized from the failure. 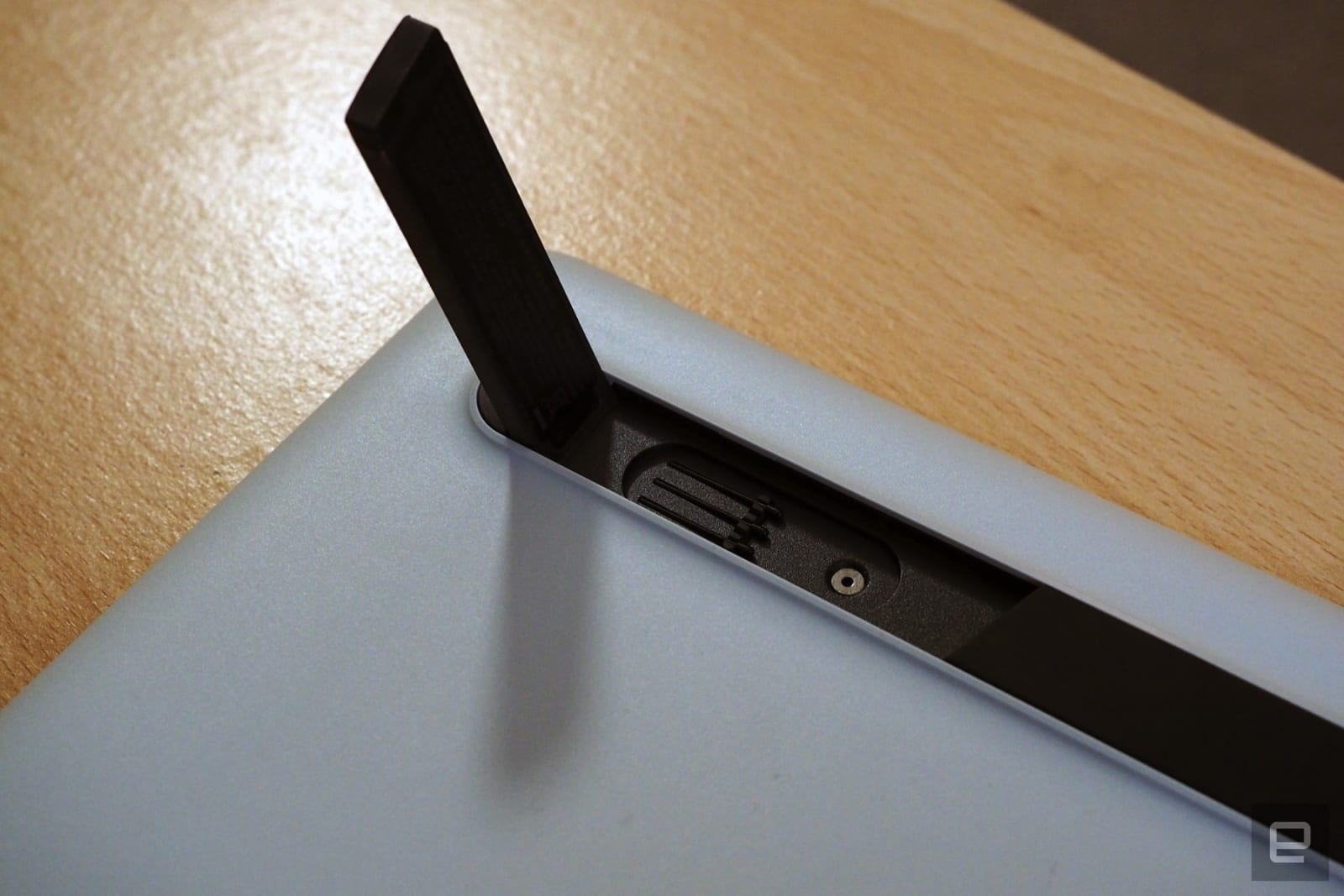 That's what makes the One so empowering; because its fundamentals are so strong, you don't need to be mindful of latency and pressure sensitivity. It just works, pretty naturally, to the point where you're not paying attention to the nib tracking, for instance, in general use.

If I'm ever coloring with pencils, I like to tilt the tip to a near-horizontal angle for ease of covering the paper. There's something very relaxing about letting the pencil shade, working your fingers back and forth as you go. Unfortunately, the matte film on the Wacom One adds enough friction to mean that you can't get paper-like glide when coloring, something I found annoying.

And while I'm nitpicking, I was annoyed at the lack of fine-grain control that I wanted to mess with. I would have loved to change the brightness, tweak the colors and set the screen up to be more comfortable to my eyes. I don't like having no control over how best to make the device work in my own space, even if I should be able to trust Wacom's calibration.

Fundamentally, the compromises that Wacom made make plenty of sense, both to keep the cost down and not to cannibalize sales of pricier devices. You get a screen, a pen and enough tech that you'll be able to get the job done, and done well. 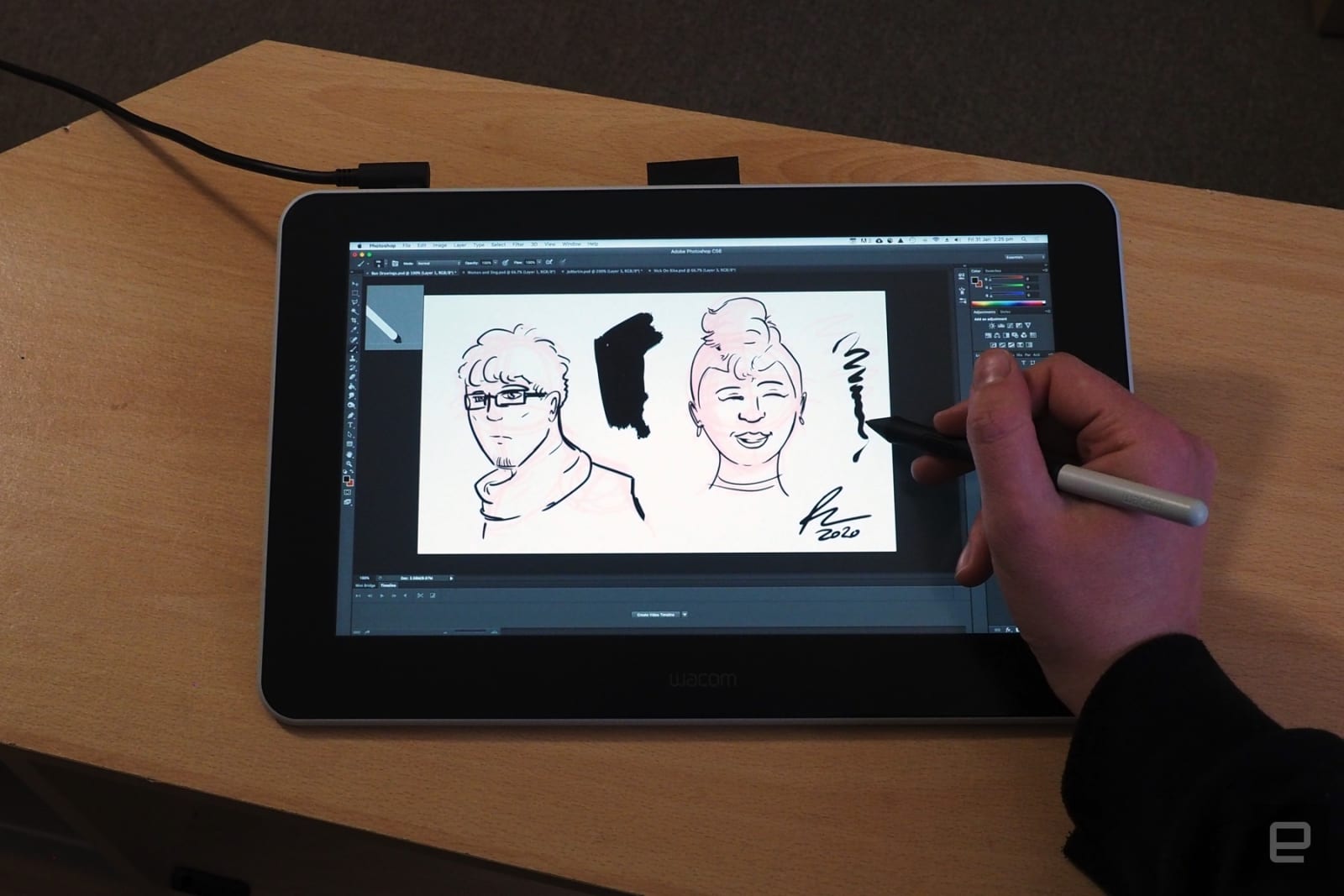 Ben Allen is a cartoonist, illustrator and graphic designer who has been using Wacom products for the last 11 years. He said that his biggest frustration with the One was its lack of Express Keys for shortcuts, forcing him to keep one hand on the keyboard while drawing. The biggest issue? The inability to zoom in and out of the image without breaking his creative stride.

Coming from Wacom's professional devices, he said there were plenty of irritating omissions, like the missing eraser tool on the back of the stylus. It's a nitpick, but he said flipping his pen over was a much more natural method of correcting a mistake. Similarly, a lack of touch on the display meant he had to switch to the move tool to push the canvas around.

Allen did like the size of the display, which he said was "more than enough" for most artists, and that he instantly "preferred it to an iPad." He said that the latency and small distance between the glass and screen beneath was another plus, and that using the One wasn't like "drawing on a window."

Allen also liked the the ability to run the One from a laptop, if it's equipped with two full-size USB-A and one HDMI port. "The portability is a big plus," he said, even though he'd think twice about using it for professional work -- the lack of shortcut keys would cost him too much time.

For $399, Wacom is selling this as a device you could drop money on without having to think about it. If you're in the market for a graphics slate and have $400 to spare, then you're essentially in no-brainer territory. It should last for years because Wacom devices have a reputation for longevity, and it's so much cheaper than the next unit up, the $700 Cintiq 16.

The most obvious competitor for the Wacom One is the iPad, a portable 10.2-inch iOS tablet that retails for $329.99. You'll need to buy the Apple Pencil for an additional $99, but you can and should save on that figure with semi-regular sales on third-party websites.

There are obvious upsides to the iPad, including the fact that it's cheap and you can use it as a standalone device. But artists have complained that the gap between the display strata and the glass makes drawing feel less natural than on other devices. That hasn't stopped major artists, like David Hockney, from using the iPad to draw covers worthy of fronting The New Yorker.

I'd never heard of XP-Pen before reviewing the Wacom One, but it also makes competitively priced alternatives to the Japanese company's offerings. For $399.99, you can grab a 15.6-inch Artist Pro Display that actually comes out ahead of Wacom on specs alone. If raw numbers are your thing, it has an 88 percent NTSC color gamut (120 percent sRGB), eight fully programmable shortcut keys and a jog dial, fixing some of my issues with Wacom's One. 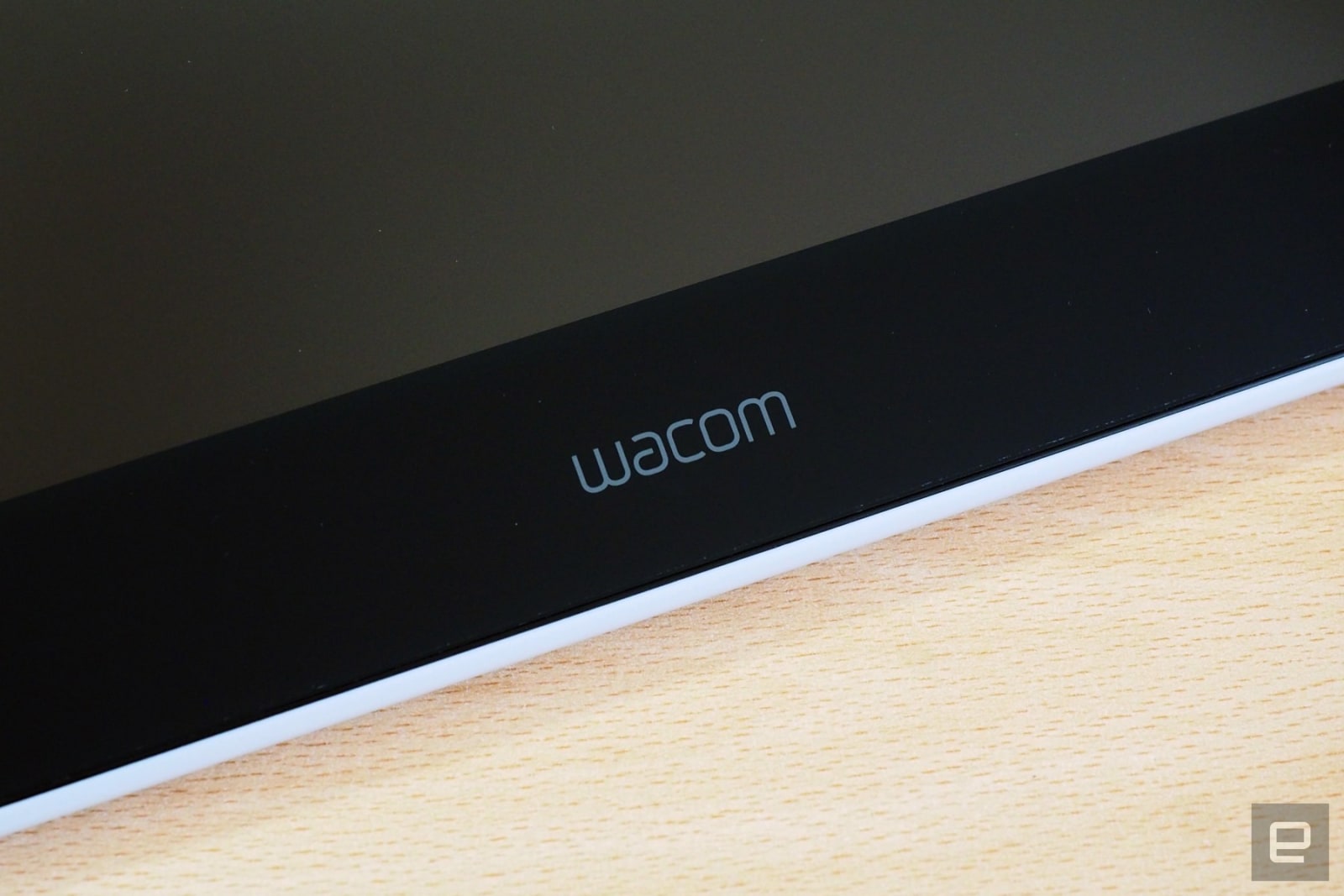 Price can be a sledgehammer that negates every other discussion about a product because it's just so cheap (or, in some cases, expensive). For every argument you could make against the Wacom One, its price can beat pretty much all of them.

I could talk about how messy it is to connect to a computer in an increasingly USB-C world, especially with a need for full-size HDMI. And how the lack of touch and shortcut keys, while logical, does limit the functionality a device like this can offer compared to its rivals.

But none of those arguments can really defeat the fact that using this thing is fun, and it's a great entry-level product. If you're upgrading from an Intuos, learning to get into digital art or you're just curious, then why buy anything pricier?

In this article: design, Digital Art, Display, gear, Graphics Tablet, review, Wacom, Wacom One
All products recommended by Engadget are selected by our editorial team, independent of our parent company. Some of our stories include affiliate links. If you buy something through one of these links, we may earn an affiliate commission.