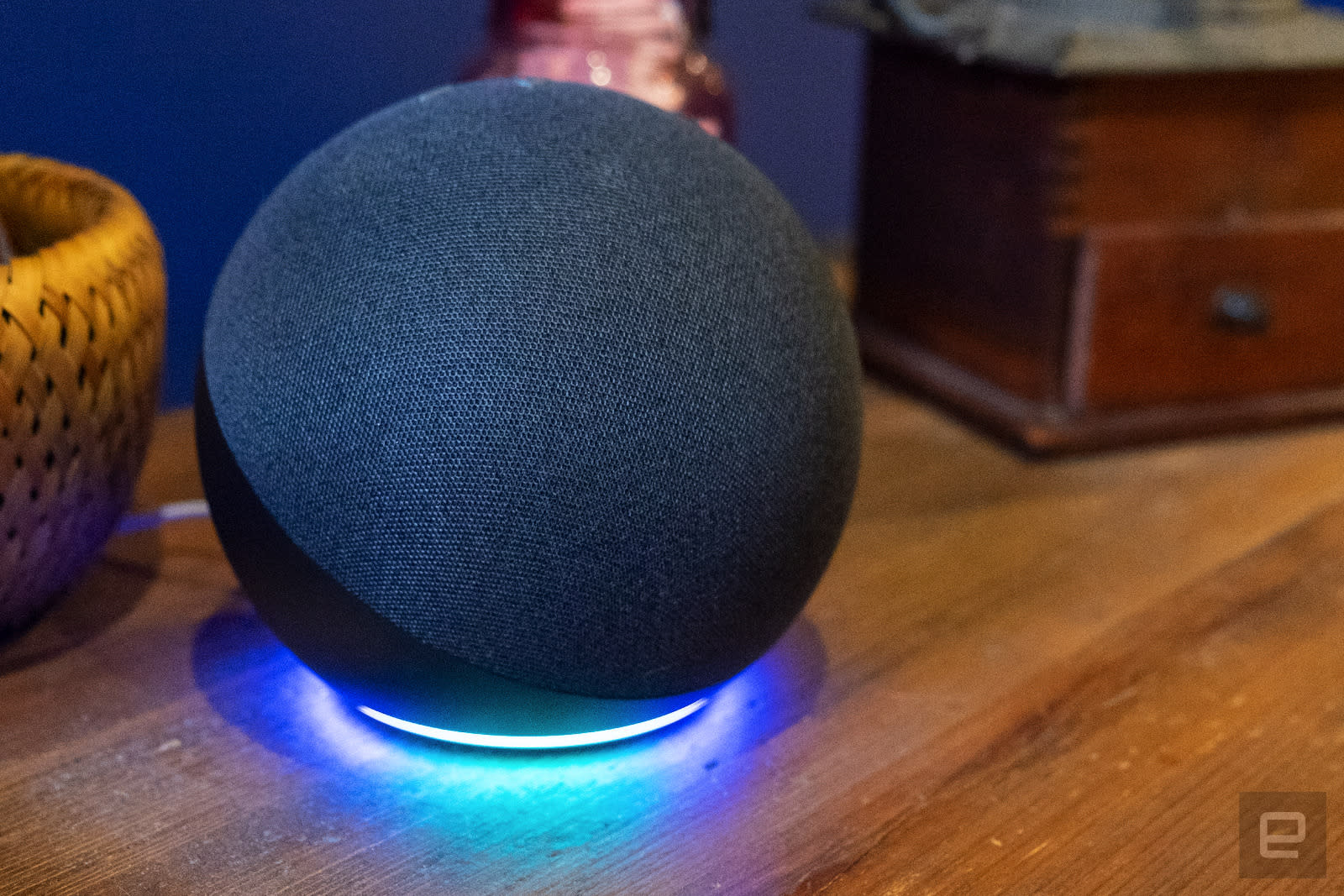 This speaker punches above its weight.

It’s been over five years since the first Amazon Echo arrived, showing people how useful a virtual assistant in your home could be. Amazon has added tons of new features to Alexa, its virtual assistant, over those years -- and as such, new Echo hardware isn’t quite as exciting. Of course, that hasn’t stopped Amazon from updating its devices on a more-or-less annual basis, as well as launching tons of Echo variants.

Last year’s Echo was one of the best smart speakers we’d used, adding the improved speakers first found in 2018’s $150 Echo Plus at a lower $100 price point. This year, however, Amazon has made some of the most significant hardware updates to the Echo yet, including a fresh design and some high-end features brought over from the more expensive Echo Plus. Between the new Echo, Google’s new Nest Audio and the upcoming Apple HomePod Mini, there’s suddenly a lot of competition in the $100 smart speaker space. Even so, Amazon’s pedigree in the category might give it the advantage here.

The Echo and Echo Plus have had a consistent design over the years: a tall cylinder with a glowing light ring and buttons on top. This year’s speaker does away with all that; Amazon opted instead for an orb with a flat bottom. The volume, mic activate and mic mute buttons are all on top, as before, but the light ring now encircles the Echo’s base. I personally like the orb look, but it could be more polarizing than the old, innocuous design, not to mention the small pill shape of the Nest Audio speaker. On the Echo’s backside, you’ll find a slot for the power adapter and a 3.5mm audio jack, which works for either input or output.

Besides the orb design, the new placement of the light ring is probably the most controversial change. When you speak the Alexa command word, the light ring turns blue and “points” at the speaker in a lighter shade to show that it’s listening. It turns red when the mic is muted, and amber when it’s going through setup or a software update. Finally, a white light appears when you’re adjusting the volume. On older Echos, the ring would fill up as you increase the volume. That’s still true, but with the light ring on the bottom it’s a lot harder to see how the volume is set.

More important than these external changes is what’s inside. There’s a new speaker arrangement, with a three-inch woofer and dual .8-inch tweeters. The 2018 Echo Plus and 2019 Echo both had a two-speaker configuration (and both sounded pretty good), so the second tweeter here is a significant addition. The new Echo has six microphones, which is one less than last year’s model, but I didn’t often run into issues getting the speaker to hear my requests.

The other major spec change is that the Echo now includes a Zigbee smart home hub inside. Previously, this feature was reserved for the $150 Echo Plus — but with improved audio quality and Zigbee support, the Echo Plus is now obsolete. For the sake of a simplicity, I’m glad to see Amazon make this move.

If you’ve set up an Echo speaker before, the process hasn’t really changed. Everything goes through the companion iOS or Android app. There, you’ll connect the Echo to your WiFi network, pick a room for it, pick what music / podcast services and other Skills you want to enable, set up any intercom, calling and messaging features and so forth. It also includes any lists and notes you create with Alexa, as well as reminders, alarms, routines, speaker groups and more. It’s a cluttered app and not terribly intuitive to use once you have an Echo set up, but at the very least, connecting your speaker is easy.

How does it sound?

Since the Echo is ultimately just a conduit for Alexa, the new Echo doesn’t have any major “features” to set it apart from existing Alexa devices. What it does have is that new speaker arrangement, which I was eager to test out. Amazon already has experience making affordable speakers that punch above their weight, so my expectations for the new Echo were high. Amazon didn’t disappoint.

Just like the Echo Studio, the new Echo punches above its weight given its price point. It sounds better than the 2018 Echo Plus, which cost $50 more, and it sounds better than Google’s just-released Nest Audio. It has an impressive bass presence for its small size, and the dual tweeters faithfully reproduced highs with excellent clarity. “Muddy” is the word I often use to describe lower-price speakers, and it’s a word that thankfully didn’t apply to the Echo. The speaker even held up favorably next to the Sonos Play:1, a speaker that originally sold for $200. (It’s since been replaced by the $179 Sonos One SL, which has similar specs and a near-identical audio profile.)

I ran the speakers through a variety of genres. Pop gems like Dua Lipa’s Future Nostalgia boomed with authority without losing the high end, while more subtle electronic-tinged albums like Good at Falling by The Japanese House had all their delicate texture reproduced faithfully. Heavier, guitar-driven fare like A Perfect Circle’s Mer De Noms and Alice in Chains’ Rainer Fog stood up well, too. And the Gustavo Santaolalla track “Unbroken” from The Last of Us Part II rattled the floor with bass from its prominent baritone guitar melody. I was only slightly let down by the speaker when playing the complex arrangements from Howard Shore’s score for Lord of the Rings. It didn’t sound bad at all, but the shifting dynamics weren’t captured as well as they would be through a bigger, more expensive speaker.

This is where I’ll note that any of my complaints need to be taken with the caveat that this is a small $100 mono speaker. By those standards, the new Echo sounds great. A few weeks ago, I said Google hit a new level for what we can expect from a inexpensive smart speaker, but Amazon has jumped right past that. Amazon even included continuous automatic tuning so that the Echo can optimize its sound based on where you put it and what you’re listening to, a feature the company brought down from the Echo Studio.

This all holds true when you’re pairing two speakers in stereo, too. They’re seriously loud, and the bass is much stronger than I would have expected. They do work with Amazon’s $130 Echo Sub, but I don’t think most people will need to spend that cash unless they really want to rumble. As it is, spending $200 for a stereo pair of Echos is a solid investment. One quick note about stereo pairing, though: The 3.5mm audio jack means you can use the Echo as a speaker for another playback device like a turntable, but that only works on a single speaker. There’s no way to pair speakers in stereo and then output audio to both, like you can do with a pair of Google Home Max speakers.

There are only a few catches. While Alexa was generally fast at responding to my queries, I had occasional trouble getting it to play specific music I requested. The query “Alexa, play the album Rattle that Lock by David Gilmour” gave me a handful of random Gilmour tracks before finally playing the album on the third try. Also, even though I had Apple Music set as my default streaming option, sometimes things would play on Spotify or even Amazon Music (which I don’t have a subscription to) rather than Apple. That said, I chalked this up to the usual random voice assistant weirdness than anything truly crippling; after all, I occasionally experienced similar problems with Google Assistant on the Nest Audio.

I also had a problem managing music in the Alexa app. There’s a “now playing”-style screen where you can see what your Alexa speakers are playing and skip tracks, hit pause, adjust volume and other basic audio features. It was among the least responsive parts of the experience; I just couldn’t reliably count on being able to control music through the app. Along the same lines, I found that Alexa and the Echo “timed out” quickly when I paused music. If I asked Alexa to pause playback, it wouldn’t remember where I was or what I was listening to after a minute or two passed. It was pretty frustrating to pause in the middle of a song and not easily be able to pick up where I was.

Finally, using multiple Echo speakers in a multi-room setup isn’t terribly intuitive. It goes back to the Alexa app, which just isn’t very good. It’s a lot easier to set up and manage multi-room audio through the Google Home app or the Sonos app. It’s not a deal-breaker, but just know that managing multiple Echo devices and coordinating playback across your house isn’t as simple as it could be.

As I mentioned earlier, there are two more $100 smart speakers coming this fall to compete with the Echo: Google’s Nest Audio and Apple’s HomePod Mini. I haven’t tested the HomePod Mini yet, but I have spent a lot of time with the Nest Audio. The Echo beats it on audio quality, but that’s not to say the Nest Audio sounds bad by comparison. It’s just not quite as loud, and the bass isn’t as prominent. But it still sounds great for its size, and a stereo pair offers a very strong listening experience. If you prefer Google Assistant over Alexa, or use a lot of Google devices or services, the difference in audio quality shouldn’t deter you. Like I said last year when reviewing the Echo Dot and Nest Mini, choose your assistant and go from there.

Apple aficionados might want to wait for the HomePod Mini, but the average buyer will probably be better off with the Echo or Nest Audio. Both Alexa and the Google Assistant are better at handling a smart home, though Apple has made strides with Siri in recent years. The company has done a good job at playing catch up on important features, and the HomePod will naturally play very well with other Apple devices in your house. And given the sheer audio quality of the original HomePod, I’m very curious to hear what Apple pulled off with its smaller model. The HomePod doesn’t yet support third-party music services, though Apple did release an API so developers can add support themselves. If you’re a Spotify die-hard, you’ll want to make sure the company adds this before buying in.

Audio quality was not among the things Echo speakers were known for when Amazon first launched the line in 2015, but Amazon has addressed that in a big way over the last few years. It’s a good thing, too, since music is still one of the most-used features on smart speakers. Now that you can get a great-sounding Echo for $100, I can see music fans turning to Amazon to fill their home with smart speakers -- as long as you don’t mind having Alexa in your home, of course. While I haven’t heard the new Echo Dot yet, I doubt it’ll be able to keep up with the dual tweeter and woofer combo found in the Echo. As such, I’d recommend anyone who really cares about music save their cash and get the bigger Echo. It’s simply a lot of fun to listen to.

All products recommended by Engadget are selected by our editorial team, independent of our parent company. Some of our stories include affiliate links. If you buy something through one of these links, we may earn an affiliate commission. All prices are correct at the time of publishing.
View All Comments
Amazon Echo (2020) review: Small in stature, mighty in sound