Amazon might be a bit Echo crazy at the moment, judging from the sheer volume of Alexa-powered devices it announced last month. But the company clearly hasn't forgotten about the device that started it all: the Echo smart speaker. It proved that voice commands were more than just a gimmick — they just needed connected devices with a ton of microphones to work well. In its third generation, the $99 Echo sounds better than ever, thanks to new audio hardware lifted from the $150 Echo Plus. In fact, the Echo sounds so good it makes its more expensive sibling practically irrelevant.

You'd be hard-pressed to see a difference between the new Echo and the 2017 model. They have similar dimensions and a squat cylindrical shape. But the new one is slightly curved on both ends, whereas the earlier one is completely flat. The increased breathing room was likely necessary to fit in the Echo's new 3-inch woofer and 0.8-inch tweeter, which it shares with the Echo Plus. Up top, you'll find buttons for volume controls, muting, and manual voice commands (so you don't have to shout "Alexa" when you're nearby). There's also a 3.5mm port that supports both audio input and output, so you can either play music from a device, or pipe the Echo's sound to an amplifier.

Thanks to its speaker improvements, the Echo sounds significantly better than the last model, which disappointed us with its dull audio. Surprisingly enough, it even sounds a bit better than the Echo Plus, which only had a 2.5-inch woofer. Everything I played sounded richer and deeper and closer to what you'd expect from Sonos, not a mere smart speaker from Amazon. The Echo also has Dolby audio processing now, but it's hard to tell how much of a difference that feature makes on such a small speaker. (Dolby Atmos support will be a far bigger deal on the larger Echo Studio.)

In particular, the Echo's bass performance is significantly better, thanks to that larger woofer. I could really feel the percussive beats in Prince's "Kiss", while it sounded practically soulless on the previous model. The ominous low-end rumble in FKA twigs' "holy terrain" managed to shake my countertop a bit at high volumes without much distortion, which is something I never expected from a smart speaker. Even podcasts and digital radio streams sounded great -- not only do voices come across clearly, but the Echo's musical prowess came in handy for shows like WNYC's New Sounds.

Amazon hasn't divulged what, if any, changes have been made on the microphone front, but in my testing it works just as well as the previous model and the Echo Plus. It can hear me say "Alexa" at a normal speaking volume from 12 feet away. And it didn't have any trouble registering voice queries, like "What's on my calendar today?" My wife and I also rely on Alexa for logging baby diapers and feedings, and the new Echo easily processed more complex requests. Though, there are still some instances where you might have to repeat yourself, especially when the TV is on in the background.

Amazon has come a long way from the hit-or-miss voice detection from the original Echo. But honestly, even that device made voice commands very compelling. Being able to shout out requests to play music or radio stations or ask basic questions, brings us one step closer to the omnipresent ship computer from Star Trek. And of course, your voice is the perfect input mechanism when your hands are full, which is what makes smart speakers and displays such ideal kitchen companions. 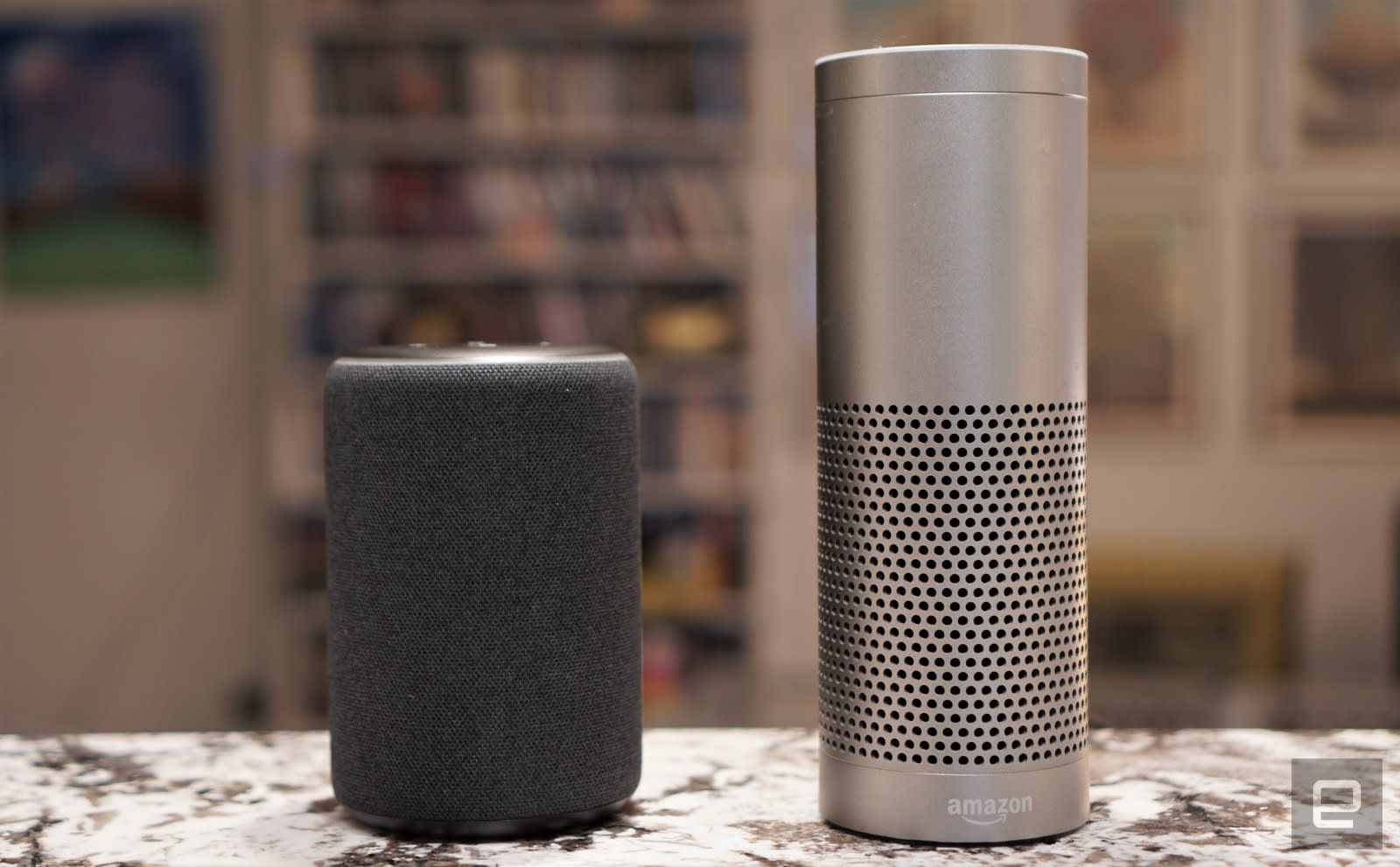 While the Echo lacks the smart hub features from the Pro model, I didn't miss them much. Previously, the biggest benefit with the more expensive model was better audio quality, but now that they sound the same, the Pro is even harder to recommend. I didn't find its smart home features very useful when I tested the 2017 model, and Amazon hasn't improved that aspect at all. It's still stuck with the Zigbee protocol, which keeps it from working with Z-Wave devices. You can also connect plenty of smart gadgets to any Echo device with Alexa skills -- that's how I control my Hue lightbulbs -- which makes the Pro's smart hub even more pointless.

Amazon is also stepping up its privacy efforts after reports emerged that employees were listening to recordings with the goal of improving the voice assistant. Now, you can opt out of that review process entirely. It wasn't a fully noble decision on Amazon's part, especially since Google and Apple have also been criticized for similar programs, but at least the company isn't ignoring privacy concerns completely. Every smart speaker is a potential security risk -- they're all basically a bunch of microphones connected to the cloud -- so it's worth considering their downsides before you bring one home. (It's also why smart speakers don't make great gifts, you never know how much people really value their privacy.)

For the privacy conscious, standalone Bluetooth speakers or wireless systems like Sonos make more sense. (Just be sure you avoid the models with microphones and voice assistants baked in.) But if you're reading this review, I wager you've already accepted that the convenience of voice commands trumps potential privacy concerns.

There are also plenty of other ways to get started with Alexa, like the Echo Dot ($60), the Echo Glow nightlight ($30), and the tiny Echo Flex ($25), which can be plugged into any electrical outlet. Those devices are all ways to spread Echo throughout your house, but any of them could easily serve as a gateway to Amazon's voice assistant. The Echo speaker makes the most sense if you want something that can play music too. And if you're looking for better sound quality, the Echo Studio ($200) or Sonos One ($199) might be a better fit. There's also the Echo Show 5 ($90), which is a good option if you'd rather see information than hear it. 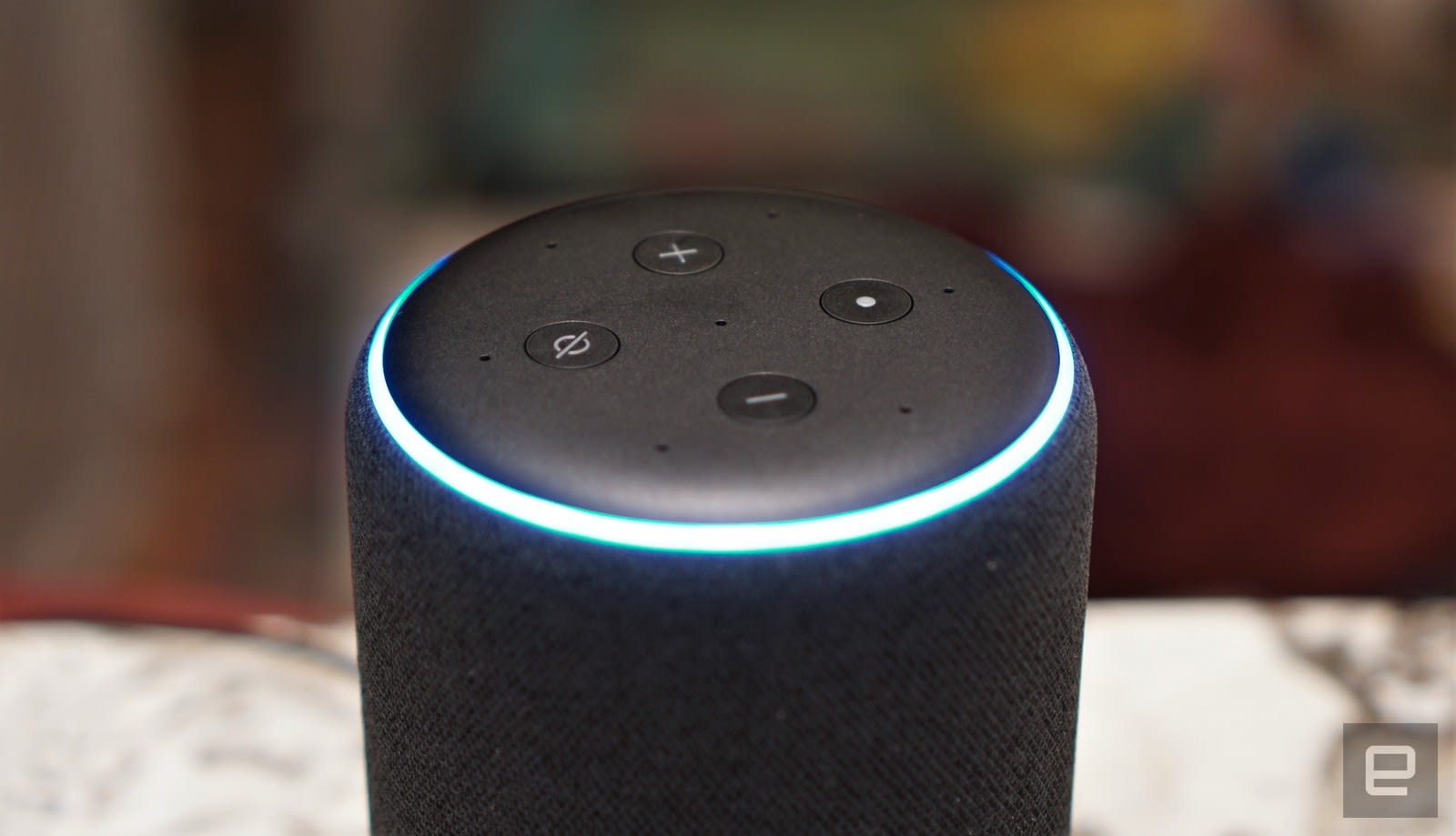 If you're a heavy Android user or fully enveloped in Google's ecosystem, one of its smart home devices might make more sense. The Google Home is still around and is technically the Echo's direct competitor, but it also hasn't been updated in four years. Instead, Google is pushing the Nest Hub ($99, formerly Home Hub) smart display. If you haven't invested in any of these smart devices yet, it's worth taking a step back to think about which ecosystem you should be a part of. Alexa makes more sense if you don't use many Google services and if you want the largest amount of support for third-party devices and services.

As an entry into the world of Alexa, it's hard to find fault with the third generation Echo. It's relatively inexpensive, it sounds fantastic and it handles voice commands like a charm. It's taken several years, but Amazon has finally managed to deliver a $100 Echo that gets all the basics right. But, ironically, Amazon's success means it also has plenty of other competing options to choose from

All products recommended by Engadget are selected by our editorial team, independent of our parent company. Some of our stories include affiliate links. If you buy something through one of these links, we may earn an affiliate commission. All prices are correct at the time of publishing.
View All Comments
Amazon Echo review (2019): Low-priced, but not low-end