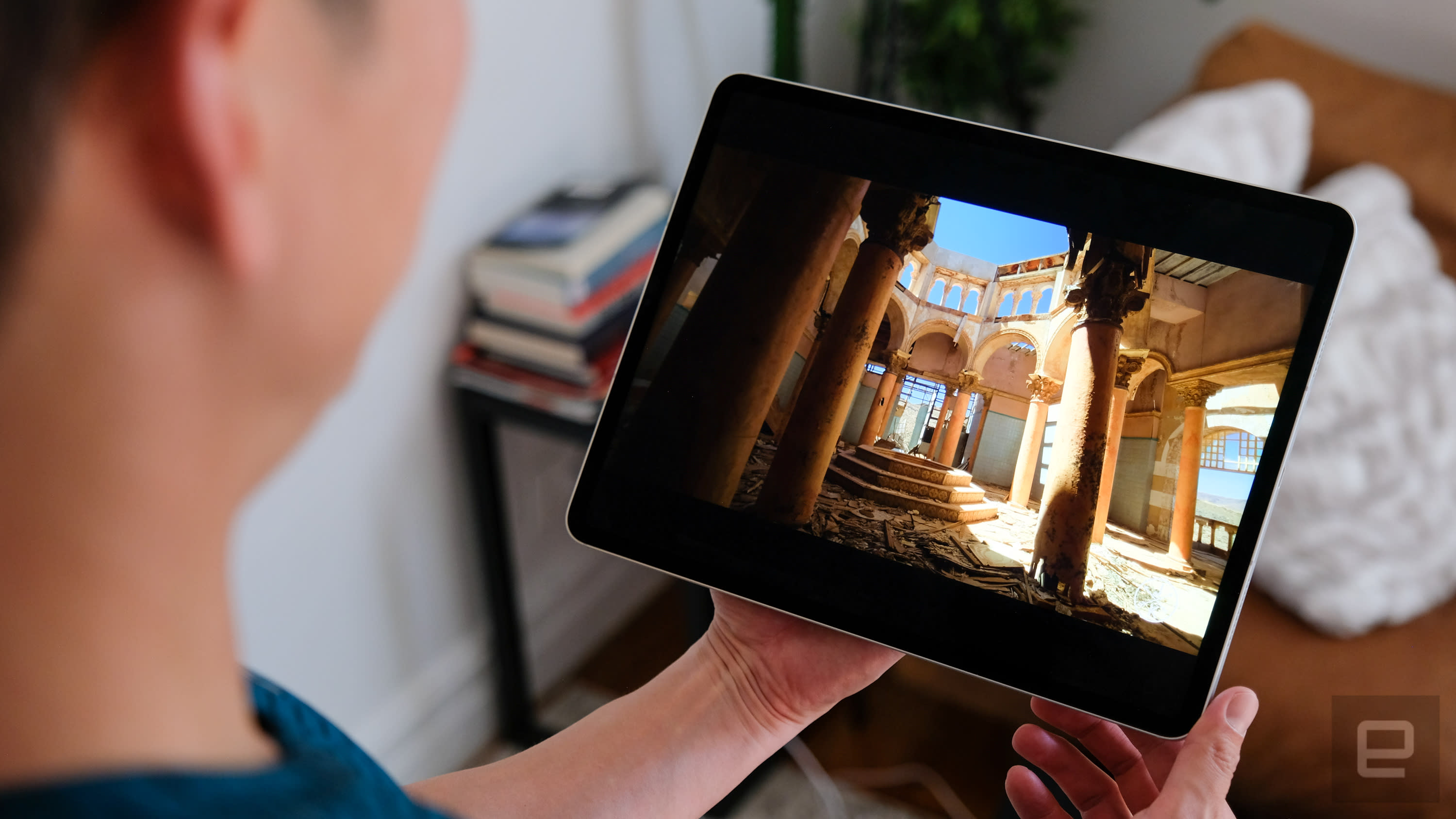 The company's new screen is a beauty, but it's a pain to produce.

The M1 chipset. Loads of RAM. 5G. Thunderbolt support. All of these help make Apple’s new, 12.9-inch iPad Pro an almost startlingly capable tablet, one that seems well-equipped to compete against more traditional laptops. (Well, apart from iPadOS’s limitations, anyway.) But if there's one area where the iPad Pro clearly outshines the rest of Apple’s portable computers, it's the tablet's brand new screen.

To learn a little more about what it took to build the Liquid Retina XDR screen, Engadget spoke to Vincent Gu, a senior engineering manager for Apple displays, and iPad marketing spokesperson Scott Broderick, who was quick to claim it is "the absolute best display we could put in the 12.9-inch iPad Pro,” Broderick said.

While some could justifiably argue that an OLED display like those seen in Apple’s iPhone 12 series might be even more impressive, Broderick has a point: this is one damned-good-looking screen.

But first, we should break down that name. As I mentioned in our iPad Pro review, the “liquid” bit refers to the fact that this is actually an LCD screen, which — unlike the OLED displays found in newer iPhones and other high-end mobile devices — relies on a bevy of small backlights to actually make the screen visible. “Retina” is a bit of classic Apple marketing fluff, which the company has used to refer to its mobile displays since the days of the iPhone 4. And the “XDR” part isn't just meant to evoke images of Apple's expensive, high-end monitors — it refers to the display's "extreme" dynamic range.

Ultimately, what makes this display so appealing isn’t its size — it’s the same 12.9 inches as before — or the fact that it refreshes at 120Hz. No, it’s all because of a component you can’t even directly see: a new backlighting system composed of more than 10,000 super-small LEDs, divided up into 2,596 local dimming zones. (In case you were keeping count, Apple’s $5,000, 6K Pro Display XDR monitor only has 576 dimming zones.)

The idea is pretty simple: by making those light sources smaller, Apple could fit more of them behind the rest of the LCD panel's many layers, allowing for more precise control over what parts of the screen are lit up in any given moment. It’s a pretty standard concept in the TV world, with TCL, Samsung, and LG each with their own confusingly branded version. For what it’s worth, though, Apple insists that its own mini-LED backlighting system was designed completely in-house.

“The mini LEDs we put into Liquid Retina XDR is a truly custom-designed, Apple-proprietary technology,” said Gu, who noted that they were more than a hundred times smaller than those used in last year’s iPad Pro. To no one’s surprise, carefully arranging those thousands of LEDs was a crucial hurdle, one Apple only managed to clear thanks to engineers who custom-designed manufacturing equipment and created their own special solder.

“We had to deliver specific equipment to be able to put these over 10,000 mini LEDs into place with such precision that didn’t exist prior to us,” said iPad spokesperson Broderick. (That said, Apple declined to tell us exactly how small each individual mini LED measures, or how long it takes to produce a single Liquid Retina XDR screen.)

Beyond the lighting system, Gu also said the switch to mini LEDs required Apple to re-engineer core components of its display stack, including the optical films and diffusers that help control the flow of light and distribute it evenly across the entire panel. And then, Apple’s design and manufacturing engineers had to take that new, physically larger screen package and bake it into a kind of device that has been synonymous with portability. In other words, the whole process was... sort of a pain.

It's a good thing for the company's engineers, then, that the mini-LED screen is said to remain a key part of the iPad Pro experience for a while. But that's not to say other changes aren't in the offing. Apple analyst Ming-Chi Kuo suggested in a recent note that Apple could shift to using OLED displays — which are known for their deep blacks and extremely vivid colors — in the iPad Air as early as next year. (For what it's worth, Broderick and Gu wouldn't confirm whether Apple had contemplated using OLED panels in the iPad Pro)

As far as technical achievements go, building the Liquid Retina XDR display was no small feat. But is it actually nicer to look at? To answer that, allow me to digress for a moment.

Once, at an Apple launch event I blurted out an “oh, shit!” a little too loudly while Phil Schiller was explaining some facet of a then-new iPhone’s camera. A few people around me tittered; my editor Dana didn’t seem quite as amused. I haven’t had another “oh shit” Apple moment until I put this year’s iPad Pro next to last year’s model and fired up a gorgeous video walkthrough of Morocco on both. The difference was instantly clear, and visceral.

In the image above, the 2020 iPad Pro is on the left and the 2021 model sits on the right. Both had their screens dialed up to max brightness, and while my photo doesn’t really do either display justice, it’s pretty clear which iPad has the edge. Last year’s Pro has a maximum brightness of 600 nits, which isn’t bad — it’s plenty for outdoor use. Most of the time, the new Pro maxes out at 600 nits too, which means users will struggle to see any difference at all while reading, surfing the web, replying to emails, and other basic tablet tasks.

Still, all it takes is a quick trip to YouTube or Prime Video to see what all the fuss is about. Once a video starts playing (or a game launches, for that matter), the display’s maximum full-screen brightness goes up to 1,000 nits, while specific portions of the screen can shoot up to 1,600 nits. Long story short, the Liquid Retina XDR display’s more granular control over lighting means objects that are supposed to be dark look appropriately so, and things that are meant to be bright (think explosions or flashy visual effects) are more eye-popping than usual.

That’s good news for content creators, filmmakers, and the other creative professionals Apple has historically courted with its highest-end tablets. “Many pros have amped up their workflows to support HDR and we’re right on board with them,” Broderick pointed out. It’s also great news for people who take their videos and movies very seriously — or at least, the ones who demand an excellent display on the go.

It doesn’t take a professional to appreciate the difference in screen quality, but it might take one to justify the price. The mini-LED iPad Pro starts at $1,100, or $100 more than an entry-level MacBook Air. Unfortunately, the 12.9-inch iPad Pro’s standout screen may be the reason you won’t be able to get one for a while.

As it stands, if you ordered the WiFi-only 12.9-inch iPad Pro with 128GB of storage from Apple right now, the company’s shipping estimates suggest you wouldn’t receive it until the end of June at the earliest. And in case you were thinking that just might be a symptom of pandemic-era hardware production, it’s worth noting that supplies for the 11-inch iPad Pro without the Liquid Retina XDR display seem considerably less constrained — a base model ordered today would likely be delivered in the first week of June according to Apple.

Reports published by Bloomberg and Nikkei prior to the iPad Pro’s launch suggested that supplies of the larger, mini-LED-equipped model were limited because of a shortage of displays and components stemming from poor yields from manufacturers.

“For a company that takes pride in its supply chain expertise, such wait times are a rarity,” Bloomberg’s latest report notes. So, what does Apple have to say about all this?

“We’re building to what we feel demand is," Broderick said. “And yet, we’re overwhelmed by the incredible response.” But, when asked more pointedly if those earlier reports were untrue, Broderick and Gu declined to comment.

Maybe it’s just as well. Our iPad Pro review — like many others — called on Apple to give its high-powered tablet new software that properly takes advantage of the M1’s considerable horsepower. We won’t get our first glimpse of whatever Apple has in store for its tablets until the company’s Worldwide Developers Conference begins on June 7th, and if some early announcements are any indication, the keynote is likely to be jam-packed with new features for Apple's whole ecosystem of hardware.

At this point, if you were considering buying one of these big new iPad Pros, it’s certainly worth waiting to see what Apple has planned for it in a few weeks. Here’s hoping the company manages to cut those wait times after we get a better sense of how the iPad experience as a whole stands to change.