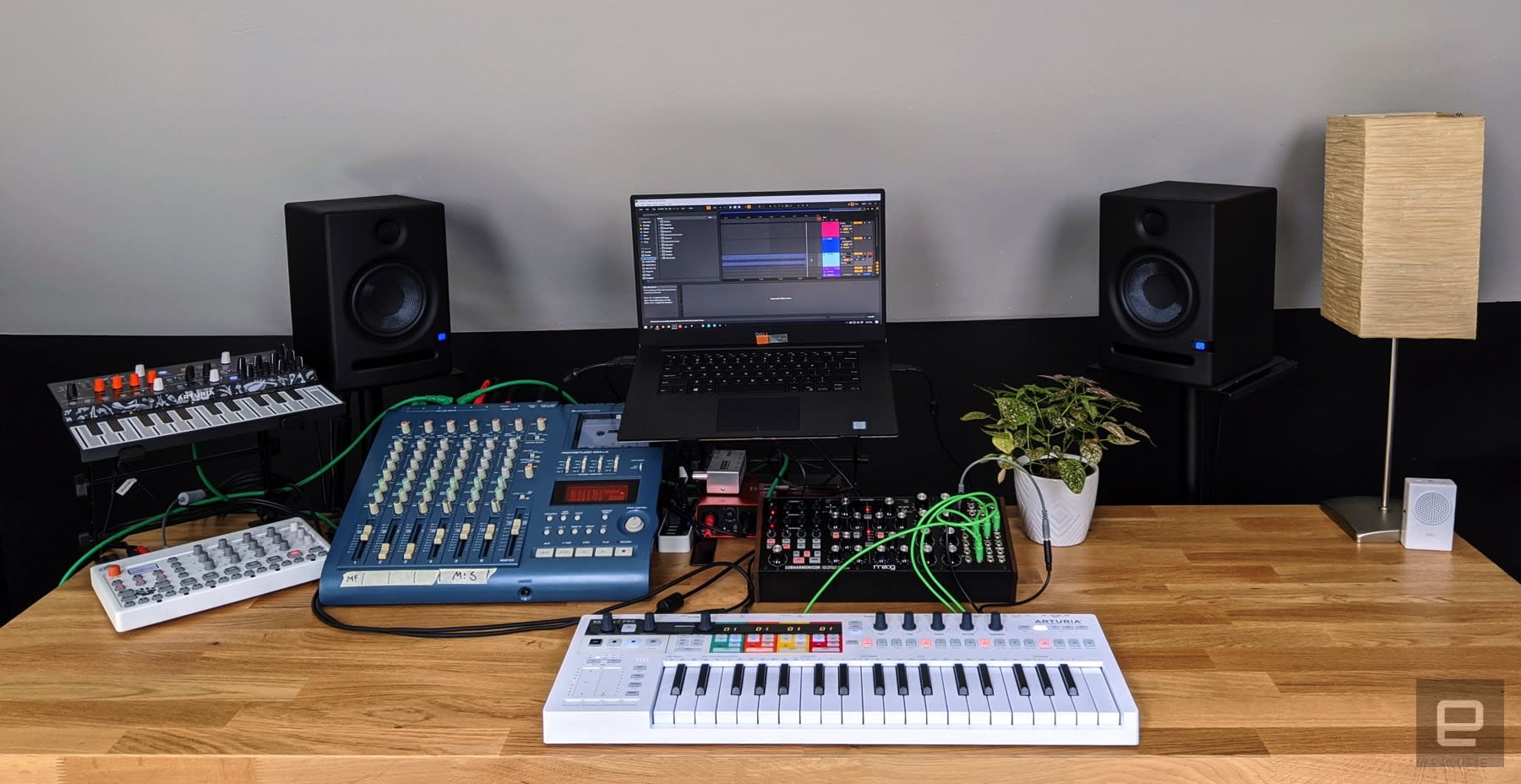 The playability of the KeyStep and sequencing power of the BeatStep Pro in one affordable package.

For hardware synth and drum machine enthusiasts, there are two controllers that stand above most of the competition: Arturia’s KeyStep and BeatStep Pro. Their combination of USB, MIDI and control voltage connections mean they play nice with everything from your favorite soft synth to a giant eurorack system. But both have their shortcomings. The KeyStep has a great key bed and a solid arpeggiator, but limited controls and it’s just a tad too unwieldy to be truly portable. The BeatStep Pro, on the other hand, is a top-notch multitrack sequencer, but its drum machine style pads are not so great for playing melodic content.

This left many clamoring for a KeyStep Pro -- something that married the traditional keyboard format of the Keystep with the sequencing power for the Beatstep Pro. Earlier this year Arturia finally made that dream a reality. Now that the initial excitement has subsided, though, the question is whether Arturia has another winner on its hands, destined to be a staple of YouTube synth jams for years to come.

Let’s start with the basics: The $399 KeyStep Pro is an incredibly solid piece of kit. It’s not quite as dense as the regular KeyStep, but it definitely feels robust enough to survive many years of abuse on the road (or at home with a careless, sticky-fingered toddler). The minikeys here are among the best I’ve played. That being said, they’re still minikeys. If you’re primarily a piano player or you suffer from sausage fingers, you’re probably still gonna have a problem with them. The buttons and knobs are firm and pleasing. The only minor complaint I have, hardware-wise, is that the touch strips on the left side of the keyboard are a bit small.

Honestly, I’m not entirely sure why the company didn’t upgrade to proper mod and pitch wheels here. While the KeyStep Pro is pretty compact, it’s far from portable, so there’s little reason to avoid moving parts or be stingy with every millimeter.

Around the back you’ll find more connectivity options than you’ll probably know what to do with. There are four sets of CV outputs for pitch, gate and mod from the four onboard sequencer tracks, plus eight dedicated drum gate outputs for use with the 24-part drum sequencer on track one. There’s also two 5-pin MIDI out ports, a MIDI in port and trio of jacks for syncing clocks with eurorack gear. And, of course, there’s a USB port for connecting to a PC or gear with USB host capability (like the MOD Duo X, for instance).

Now obviously, getting your head around all these ins-and-outs isn’t the most intuitive thing. And it takes a fair amount of menu diving on the KeyStep pro’s tiny OLED screen to get everything set up. But even if you’re like me and frequently skip on reading the manual, it shouldn’t take you long to figure out the basics. After a couple of days (a good chunk of which was spent just getting familiar with the hardware). I had the KeyStep Pro set up as the heart of a temporary rig feeding CV to the Moog Subharmonicon; MIDI to the Model:Samples and MicroFreak; and controlling softsynths in Ableton.

But, while the basics are relatively straightforward, the KeyStep Pro is still a pretty complicated controller. How could it not be? The four polyphonic sequencer tracks (one of which also has a dedicated drum mode and three of which have arpeggiator modes), plus the slew of ins and outs, not to mention the complex performance features that allow you to create 16 patterns per track, chain up to 16 patterns together, save your patterns and settings as scenes and then collect all of those things into projects, mean you’ll probably want the manual handy.

Honestly, even after about a month, I still haven’t really unlocked the power of scenes. I feel like I’m barely scratching the surface when it comes to the deeper performance tools at my disposal.

The more basic performance features, though, are pretty great. The sequencer defaults to 16 steps, but you can easily extend it to 64. And one of the great things is, you can quickly record a 16-step sequence, either by playing live or punching it in with the step sequencer, and then extend the sequence to 32, 48 or 64 steps, automatically copying the original notes over to the new sections so you can tweak and evolve your sequence on the fly.

The five knobs to the left of the buttons that extend your sequence offer easy ways to manipulate it. You can change the gate, velocity, pitch and timing of notes and even introduce a little dash of randomness. Just be careful when applying the random to a sequence because it’s definitely more extreme than the randomization features on some other instruments and can quickly get chaotic.

Below that is a row of 16 buttons with a ton of different functions. For one, this is the step sequencer. It’s also how you’ll chain patterns, or copy and paste them (a function that’s a little more cumbersome than it needs to be) and navigate scenes. Plus, all of the buttons have shift functions that allow for further manipulation of a pattern -- say, pushing all the steps to the right or changing the quantization.

One of my favorite tricks so far when I’m feeling uninspired is to punch in a simple sequence. Then I use a bunch of those shift functions to slowly morph it by changing octaves, inverting it, randomizing the note order or shifting the whole sequence around to change the timing. The beauty of these tools is that, while they can help generate new musical ideas, since the palette of sounds is closely related, they’re also useful for jamming and live performance. It’s unlikely that any changes you make will be too jarring.

Besides, if your timing is good enough (the built-in metronome with its own headphone output can help), you can cover up more extreme changes with the beat repeat buttons that will loop 1/4, 1/8, 1/16 or 1/32 notes. If overused these can feel pretty cheesy, but they’re still fun.

It’s also worth noting that there are a lot of shift functions on this keyboard. Most of them are clearly labeled and self-explanatory, but it will take a while to commit them to muscle memory. All but one of the 37 keys has a shift function. As do most of the buttons. The most immediately useful and obvious are the ones that control the arpeggiator and scale mode. The arpeggiator here is excellent. There are seven different modes including: in order, random and polyphonic. And there are options to descend one octave or ascend up to three. Scale and chord modes make it easy for those of us with lesser keyboard skills to transpose a chord or stay in key when jamming. There are seven preset scales to choose from, but you can also create custom scales and save them in one of the two user slots.

There are even three options for how the sequencer will advance. There’s forward, obviously. But there’s also a random mode, which just jumps around a sequence chaotically. This is surprisingly fun for creating on the fly drum fills without relying on the beat repeat function. Then there’s “walk”, which is semi-random. The KeyStep Pro manual probably explains it best:

This is actually pretty similar to the stochastic mode on the Volca Modular. And, it turns out it’s really great on drums as well. If you find yourself falling back into the same old grooves or just want something that’s a tad unpredictable (without being pure chaos), the walk mode can generate some great glitchy drums. This works best with pretty busy patterns, though.

Honestly, my only complaint here, other than the occasionally steep learning curve, is that you have to have the sequencer playing to use the arpeggiator. It would be great, especially when just noodling around and jamming, to be able to use the arpeggiator regardless of whether you’ve hit play or not.

The only thing keeping the KeyStep Pro from being a no-brainer is its limited software integration. This was built almost exclusively for players who spend their life using hardware instruments. There’s no transport controls for your DAW and a limited number of knobs, which need to be manually mapped.

If you’re running a hybrid setup with both hardware and software, you might want to consider either a dedicated controller for your DAW or the Novation 49SL MkIII. It’s quite a bit more expensive -- $600 versus $399 for the KeyStep Pro -- but you get tight integration with Ableton, decent pads for launching clips and finger drumming, plus multiple larger screens for direct feedback of parameter changes. You still get CV and MIDI connections as well, though fewer of them than on Arturia’s controller, and there’s no dedicated drum gates.

It’s also a lot larger. While the KeyStep Pro isn’t exactly portable, it’s easy enough to toss in the backseat of a car or move around the house if you want a change of scenery. The 49SL is almost eight inches wider, four inches deeper and more than twice as heavy at 15 pounds. The 49SL will live in your studio.

No matter what, at $399 the KeyStep Pro is a pretty compelling deal. If you’re into eurorack or modular synths and want to be able to sequence multiple instruments from a single controller, this is an obvious finalist, if not necessarily the runaway winner. If you want super tight integration with a DAW, this isn’t the controller for you. But if you’ve been dreaming of a KeyStep with beefed up sequencing capabilities, or a BeatStep Pro with traditional keyboard format, this is the obvious conclusion to your quest.