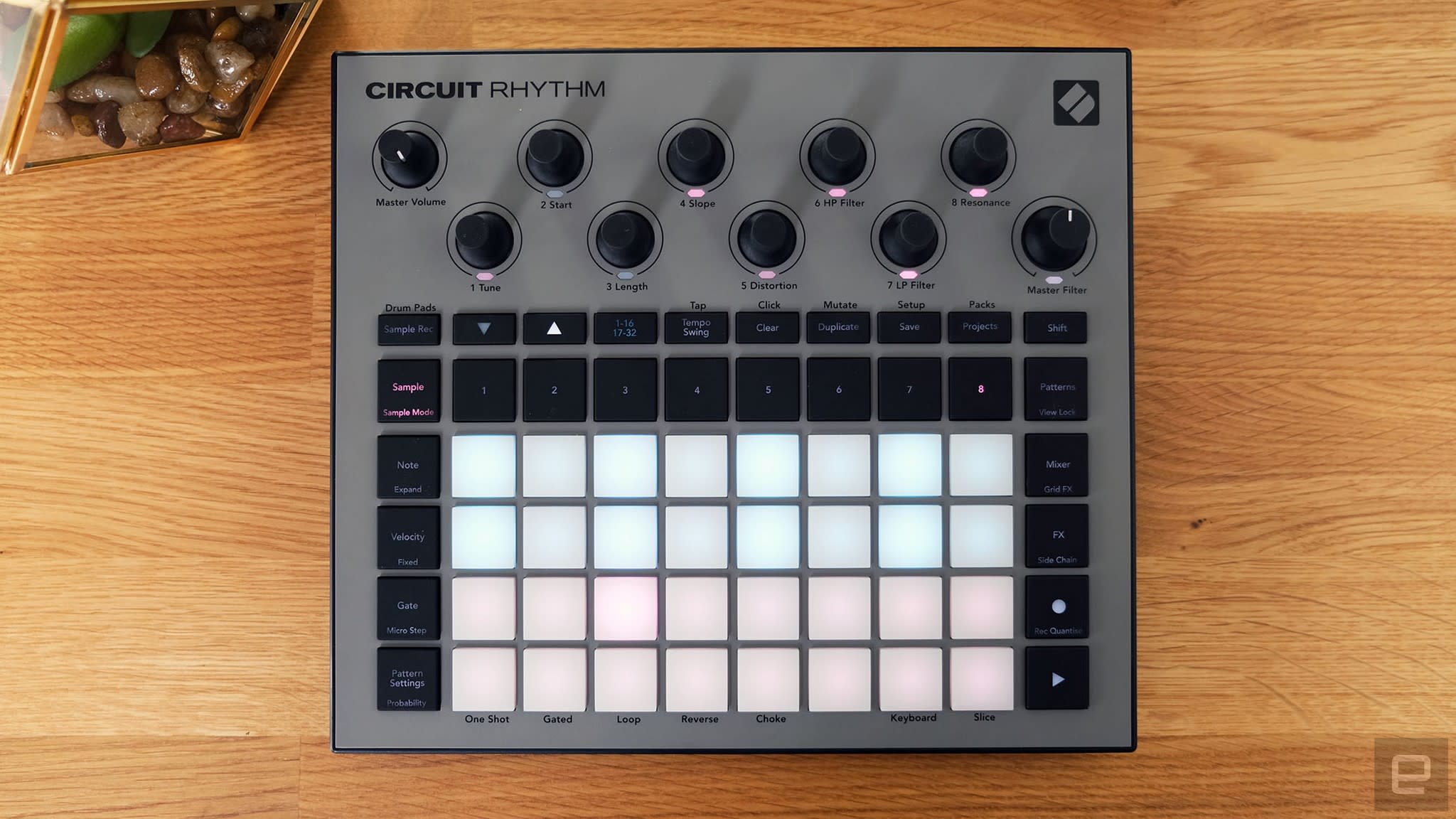 Novation's latest groovebox borrows heavily from the SP-404 and is perfect for lo-fi hip hop and house.

The original Circuit groovebox developed something of a cult following thanks in large part to Novation’s relentless updates. So it was no surprise that the company decided to give it a proper sequel earlier this year. What was a surprise, though, was that along with the Circuit Tracks, Novation also announced the Circuit Rhythm, an entirely sample-based instrument. The Rhythm combines the simplified, screen-free workflow that made the Circuit so popular with a full-featured sampler and performance effects that clearly were inspired by the SP-303 and SP-404. The big question is whether or not what makes the Circuit so compelling when playing and sequencing synths translates to chopping up loops and capturing oneshots.

Physically, the Circuit Rhythm and Circuit Tracks are nearly identical. The faceplate is light gray instead of black, and some of the labels on the controls are different, but they’re built on the same core platform. The front has the same 32 RGB velocity sensitive pads, along with 28 buttons for switching views and tracks, plus eight endless encoders for changing various parameters, and two knobs dedicated to volume and the master filter. Around back you’ll also find five-pin MIDI In, Out and Thru ports; USB-C for power and connecting to your computer; a 3.5mm sync jack for connecting Volcas and the like; a headphone jack; and ¼-inch stereo ins and outs. Oh, and of course there’s a rechargeable battery that Novation says should last up to four hours. In my testing I haven’t quite hit that mark, but I haven’t been too far off either — about three to three and a half hours. 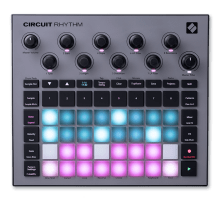 Then the core of the Rhythm is its eight monophonic sampler tracks. And, even though there are only eight tracks you can use “sample flip” to place multiple samples on a single track. For instance your kick and snare, so long as they don’t overlap.

All of this is pretty impressive considering the Circuit Rhythm’s $400 price tag and portable size. But what seems great on paper doesn’t always translate to the real world.

That being said, Novation did do a lot right. For one, it’s important that the company saw fit to build an actual sampler and not just a sample-based groovebox, like Elektron’s Model:Samples. Don’t get me wrong, I love the Model:Samples. But if you’re looking to spontaneously sample something you’ve been jamming on, or to chop up soul loops, it’s not gonna help you. The actual workflow for sampling and then doing basic editing, chopping, etcetera is pretty easy to wrap your head around too. In fact, I’d go so far as to call it fun. I’ve definitely been in a creative rut recently and stepping out of my comfort zone to slice up samples from YouTube and make some lo-fi and boom bap-inspired beats has helped me get back to enjoying making music again, even if what I’m making is objectively not good.

The 32-step Circuit sequencer also remains a strong suit. It’s simple, intuitive and deceptively powerful. You can program a beat manually or play it in “unquantized” (in reality this is simply quantized to the microsteps — of which there are eight per step, but it gets close enough in most cases). You can automate most of the parameters across a pattern, then chain patterns together to create longer progressions. Beyond that there are scenes, which consist of different pattern chains, which can themselves be chained together to create full arrangements.

When creating patterns you can also introduce variation and unpredictability by using the probability parameter. This sets the chance that a particular step will be played. It’s not quite as robust as Elektron’s trig conditions, but it can keep things from getting too stale. And, if you’re feeling a bit stuck, you can “intelligently” remix a pattern with the Mutate function. It scrambles up your sequence to make something new, though the results aren’t always great and there’s no undo, so make sure to duplicate your pattern first. In general the Mutate felt more useful on the synth-based Circuit Tracks than on the Rhythm, but anything that can introduce a bit of randomness is good in my book.

While obviously the whole point of a sampler is to record and perform with your own samples, I do have to give Novation credit for the stock sound selection. Most of your bases are covered from acoustic drums, to 808s, to guitar licks, electric piano and synth pads. And they sound good too, which is not something you could say about the presets on the Circuit Tracks. Basically, no matter what genre of music you make, there should be enough here to get you started.

While the basic workflow of the Circuit Rhythm and Tracks are basically identical, there are some differences. There are specific pages for recording and processing samples, for instance, and a page dedicated to what Novation calls “Grid FX”, which are basically punch-in effects like repeat, gate and vinyl simulation that give you basic tools for manipulating your beat.

But, just like the Tracks, some of the more advanced features aren’t always immediately obvious and having the manual handy is a must while you’re finding your bearings. I’m sure that eventually I’d be able to commit most functions to memory, but after a few weeks I’m still having trouble remembering how to turn threshold on and off when recording samples, it took me forever to figure out how to manually place slice points, and I still haven’t figured out how to set a count-in for unquantized recording. (I’m not even sure you can.)

The effects are also something of a mixed bag here. The delay, reverb and sidechain effects are all the same as on the Tracks. They’re charmingly lo-fi, but the line between barely noticeable and over the top (especially on the sidechain) is extremely thin. And the Grid FX are pretty mediocre. The vinyl sim is passable, but the beat repeat and gate effects always felt slightly out of sync. It’s entirely likely that I just haven’t mastered performing with the Rhythm yet, but I don’t struggle nearly as much with the same effects on Teenage Engineering’s PO-33.

There are some features that would be super useful too that I’m hoping to see Novation add in a future firmware update. For one, the ability to swap or adjust Grid FX from the device itself would be huge. You can load up to 16 of them, but they’re all presets, so you can’t change the depth of the flanger, for instance, without connecting to the Components app on your computer. This also means that if you start a new “Pack” on the Circuit (Novation’s term for a collection of projects and samples) you’re stuck with the default effects.

Fine-grained control over the tempo is also a must that’s currently missing. I spent well over an hour trying to line up a sample from “Stridulum Theme” off the soundtrack to The Visitor, but no matter what I did I couldn’t quite get it to loop cleanly. The actual BPM of the sample is somewhere between 85 and 86 BPM, but the Rhythm will only deal in whole numbers. (It doesn’t help that without a screen, trimming a loop to the perfect length is a giant PITA.)

The Circuit Rhythm is far from perfect, but definitely offers a lot of compelling features at a decent price. The question, ultimately, is what features are most important to you?

The Model:Samples is $100 cheaper at $299 and its sequencer blows the Circuit out of the water, if you ask me. But it’s not as finger-drum friendly, plus it doesn’t have built-in sampling capabilities or a battery. (You have to pay $50 for a special handle that you stick AAs in.) Korg’s Electribe Sampler feels a lot sturdier than the Circuit and can use single-cycle waveforms to essentially become a synth. But it costs $70 more, its sequencer feels a little outdated and, in my limited experience, it’s just not intuitive.

You could of course go for a Roland SP-404, from which the Rhythm is clearly takes inspiration. The modern version, the 404A, costs $550 — quite a bit more than then Circuit. It’s workflow might also feel a tad archaic if you’re used to more modern equipment. That being said, the SP-303 and SP-404 have legions of fans for a reason: They’re undeniable classics.

Then, of course, there’s the other giant of hip hop production: the MPC. As the cheapest option, the MPC One is still pretty expensive at $699, while the new touchscreen workflow has earned plenty of detractors. If you want an old-school beat-making experience you won’t find it here, and the prices for vintage MPCs are out of control.

If you’re looking for the cheapest and most portable device with sampling ability though, I can’t recommend the $89 PO-33 enough. It’s not nearly as capable as any of the other devices listed here, but it can feel like a stripped-down SP-303 that fits in your pocket once you master its quirks.

The Novation Circuit Rhythm is a strong contender for best entry-level sampler. The learning curve is a bit steeper than some might have you believe, but once you’ve figured it out, finding your way around is simple enough. It’s not the cheapest and it doesn’t beat the competition on pure features, but it does strike an admirable balance. If you’re looking to add a sampler to your setup on the cheap, or want to get started making hip hop or house music without the need for a PC, this should definitely be on your short list.