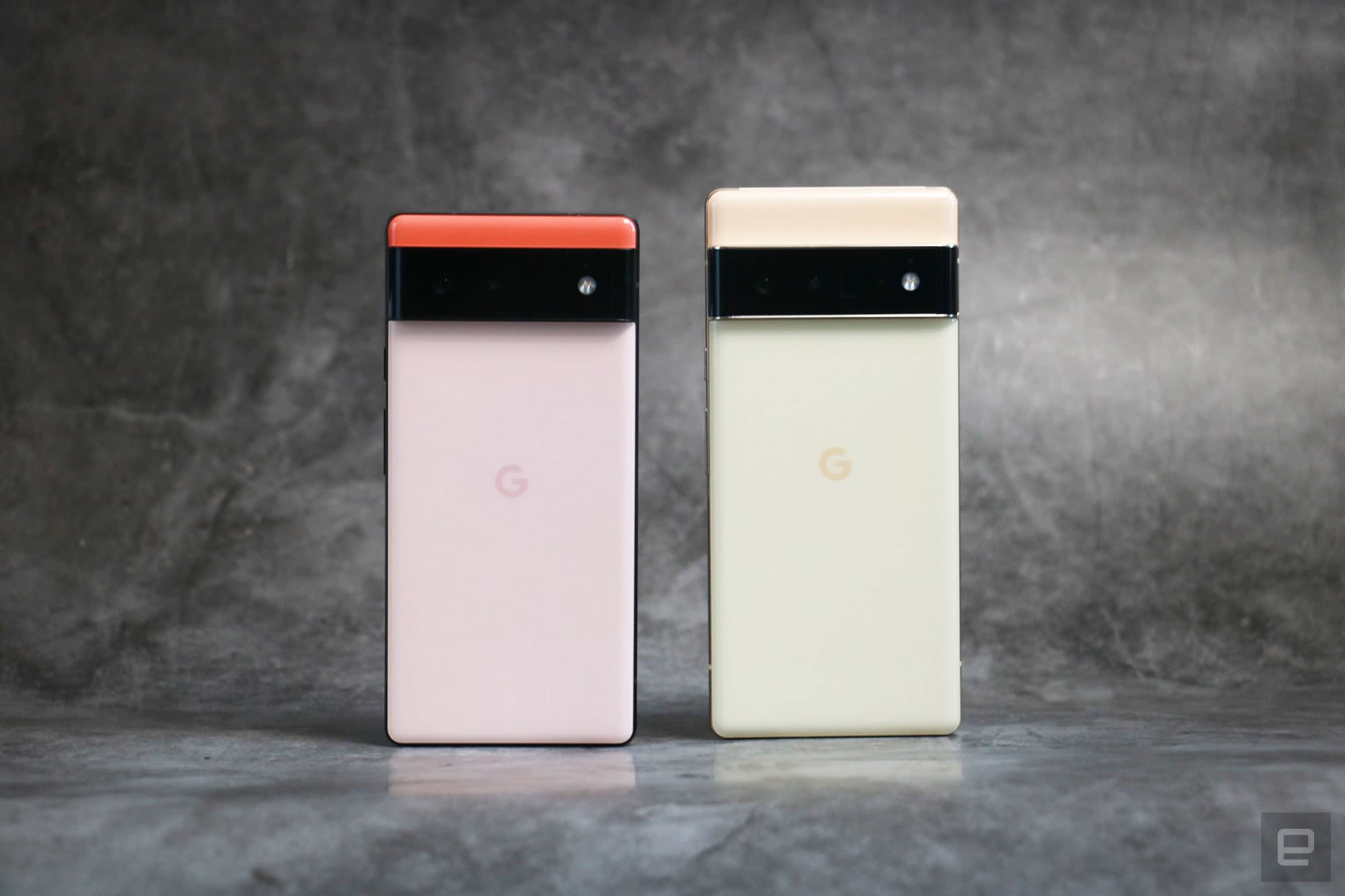 But with a starting price of $599, they don’t command a premium price.

The Pixel 6 and 6 Pro are finally here, and they’re the most promising phones from Google in years. That’s largely thanks to Tensor, the company’s first mobile chip. We’ve already seen plenty of pictures and videos of the Pixel 6, but now we actually have devices to play with and detailed specs to share. One of the highlights of the Pixel 6s are the cameras, which not only received a processing boost thanks to Tensor, but also a serious hardware upgrade.

Additionally, these handsets bring faster-refreshing screens, Android 12-exclusive features and significant voice recognition enhancements. But the best thing about the Pixel 6 and 6 Pro is the reasonable price. Starting today, you can pre-order a Pixel 6 for $599 and a 6 Pro for $899, and they’ll be available on shelves October 28th.

That’s a surprisingly low price for the Pixel 6. You’re getting a 6.4-inch Full HD screen with a 90Hz refresh rate, not to mention a 50-megapixel main rear camera (with pixel-binning), 12-megapixel wide angle lens and an 8-megapixel selfie camera. For $300 more, the Pixel 6 Pro offers a sharper 6.7-inch 1,440p screen that goes up to 120Hz and has narrower bezels. The Pro also adds a 48-megapixel telephoto lens with 4x optical zoom, and its 11.1-megapixel selfie camera is both sharper and packs a wider-angle lens.

The other main differences between the Pixel 6 and Pixel 6 Pro are that the Pro has a larger battery and comes with 12GB of RAM, while the smaller model has 8GB. Oh, and only the Pro goes up to 512GB of storage and has an ultra wideband chip for ranging and spatial orientation.

Pretty much every other feature is standard across the two devices. They’re both powered by Google’s new Tensor chip — an octa-core system comprised of two "Prime" Arm X1, two big and four small CPU cores. Both phones also have in-display fingerprint sensors, IP68 protection ratings, support for sub-6, mmWave 5G and pretty much every other standard you’d expect from a flagship in 2021.

A return to premium design and fun colors

The two also differ slightly in design, which marks a departure from previous years. Right off the bat, the phones feel markedly different from the Pixel 5 and Pixel 4. Instead of a matte soft-touch texture, both Pixel 6 phones are covered in glass with gently curved edges, lending them a premium feel. I’m not a fan of their new blocky shape, and the Pro in particular feels very similar to Samsung’s Note 20 Ultra. Thankfully, the Pro is lighter than the Note 20 Ultra and the iPhone 13 Pro Max.

Both phones are also much larger than the Pixel 5, and though their screen sizes differ, they have almost the same footprint. As you’ve probably noticed in the images circulating around the internet, the focus of the backside is an approximately inch-tall bar that spans the width of the device. It houses the cameras (two for the Pixel 6 and three for the 6 Pro), and while it does protrude about half an inch from the back, it doesn’t cause much wobble when you place the handset on a flat surface.

As mentioned, the Pixel 6 has noticeably thicker bezels and its edges have a matte texture compared to the Pro’s shinier finish. They also come in a different trio of colors, and the Pixel 6 arguably has the better palette. I’m a fan of the minty blue option, and the blush version is nice too. Meanwhile, the Pro only has one fun shade that's not black or silver: the almost yellowish hue. Not everyone’s going to love it.

Both phones run Android 12 with some Pixel-exclusive features. The most obvious refresh is the Material You UI, which took a really long time to roll out to the beta (and arrives on Pixels first). If you’ve been following our coverage of Google’s software, you know that Material You adapts by taking the primary color elements of your home screen’s wallpaper and then applies that throughout the system.

That means you get colorful, matching hues for things like your keyboard, menu buttons, settings panel and notifications shade. Seeing it fully realized on the Pixel 6 was a treat. Good news for current Pixel owners: It will roll out to the Pixel 3 and newer devices today.

But when Google introduced Tensor earlier this year, it also promised big things were coming in areas like voice recognition and camera processing. The company teased us with some limited demos then, but at a recent briefing I was shown more of the features coming to the Pixel 6 and they’re truly intriguing.

First of all, Google has revamped its speech recognition software. Not only will the engine be better at understanding you, but it also suggests alternatives that might make more sense. For example, if you have a friend whose name is Bryan (with a ‘y’), and you’ve changed the spelling a few times from Brian (with an 'i'), the system will note the correct spelling going forward.

Google will also let you insert emoji by saying things like “smiley face emoji.” During my demo, I said “hot pot emoji” and the fire and pot symbols appeared. (Sadly, Unicode doesn’t have an icon for hotpot yet. Shame.) You’ll also be able to say the words “Send” or “Clear” to submit or delete your message, and go into the text to edit it while you’re speaking by tapping the error and saying what it should be. No need to switch in and out of voice typing mode.

Arguably the most interesting of the Pixel 6’s voice features is the ability to translate languages as you’re typing. A Google rep pulled up a WhatsApp chat with a friend who uses Japanese, and typed “Certainly, I will do that.” Almost simultaneously, the Japanese characters (hiragana) appeared in the text field.

My Japanese is rusty, so I’m not entirely sure the translation was accurate, but an earlier message from the conversation did appear to correctly convert “so cool” to “totemo kakkoii.” The translation happens both ways, so if your friend is sending you something in a foreign language, Google can also convert it to something you can read.

One of my favorite things about Pixel phones is their call-related Assistant features. Things like Call Screen and Hold For Me keep me from wasting time on robocalls or waiting for a representative who is “currently helping other customers.” The Pixel 6 will also get a new Wait Time feature that shows you how long you can expect to hold for the top 5,000 businesses in the US and even convert those annoying menus into an onscreen interface. That’s not only great for saving you time, but can help those with hearing impairments. I didn’t get to try it out myself yet, though Google’s rep did call HBO and the Assistant seemed to accurately transcribe what the automated operator said.

The main area where the Pixel 6 and 6 Pro have improved is their cameras and indeed, this is what I'm most excited about. We're at a point in the smartphone camera race where all the major players deliver excellent image quality regardless of whether they’re using a 108-megapixel or 12-megapixel sensor.

So where Google needs to stand out is with special features. And there’s a long list of new ones here thanks to that Tensor chip, including a Motion mode, object eraser and real tone for more accurate processing for people with different melanin levels.

Few of these are truly new in the smartphone world. We've seen the eraser option before on Samsung phones, where if there's a stray garbage can in your photo, you can select it and the system will remove it for you. During my demo, a Google rep took a picture of their colleague with passerby and a backpack in the background. They then tapped the extraneous person in the Photos app to outline and then delete them. There was a faint shadow on the wall that Google generated in its place, but it was otherwise as if there was never a person there.

The Motion mode also offers other familiar tools we’ve seen on Huawei and Sony phones. One is a long exposure setting that lets you shoot moving cars at night (or anything with lights, really) and have their tail lights appear in the image as iridescent streaks. Because my meeting took place during the day, a Google rep demonstrated this by taking pictures of videos projected onto a wall, including a waterfall. The Pixel 6 rendered beautiful light streaks and silky cascades of water. So far, I’ve been impressed by the images it produces, especially compared to samples taken with Huawei’s Light Painting mode.

The other feature in Motion mode is called Action Pan. Basically, if you have a fast moving subject, like a dog prancing through a field or a bike zooming down the street, it will let you capture a crisp photo of your subject against a motion-blurred background. Again, based on the demo at my briefing (of a Google rep cycling inside a room in circles), it seemed to work well.

With the Pixel 6 launch, Google is also officially introducing its image equity program. We've heard a little bit about this at I/O, where the company said it’s working to make the Android camera more inclusive. In the Pixel 6, Real Tone is baked in (not something you can turn on or off) and it should render people more accurately, and also better expose and color-balance scenes. Of course, this is something that will require more real-world testing for me to conclude it’s effective.

There's a slew of other photography-related features that I’d love to try outside of a controlled demo, including a Face Unblur tool. But while there’s plenty of software tweaks to check out, I’m also dying to grab some pictures with the new hardware. Both the Pixel 6 and Pixel 6 Pro now have a 50-megapixel main sensor with f/1.85 aperture. They also have a 12-megapixel ultra-wide option that has a 114-degree field of view, and the Pro has an additional 48-megapixel telephoto lens with 4X optical zoom.

A Google rep and I stood side by side with him holding the Pixel 6 Pro and me using the iPhone 13 Pro I had on hand. Both of us zoomed to the furthest we could to capture a little Android figurine sitting on a distant couch, and Google appeared to be the clear winner. While both devices rendered the robot, when we zoomed in it was evident the Pixel 6 Pro captured more detail, clearly showing the lines between its head and body, which were basically just smudges on the iPhone.

Up front, the Pixel 6 has an 8-megapixel camera while the Pro goes up to 11.1-megapixels, and the latter can capture selfie videos at up to 4K at 30 frames per second. Both devices can shoot at 4K resolution at 60 fps with their rear cameras, and there’s a new Speech Enhancement mode to play with that will drown out background noise to focus on what you’re saying. All these will also require extended real world testing before I can tell how useful they are.

In fact, there’s plenty more to test, including battery life, Tensor’s performance and the in-display fingerprint sensor’s responsiveness. You can already pre-order the Pixel 6 for $599 and the 6 Pro for $899, which is hundreds less than their Apple and Samsung counterparts, but I’d suggest waiting for our full review before spending your money.

Catch up on all the latest news from Google's Pixel 6 event!