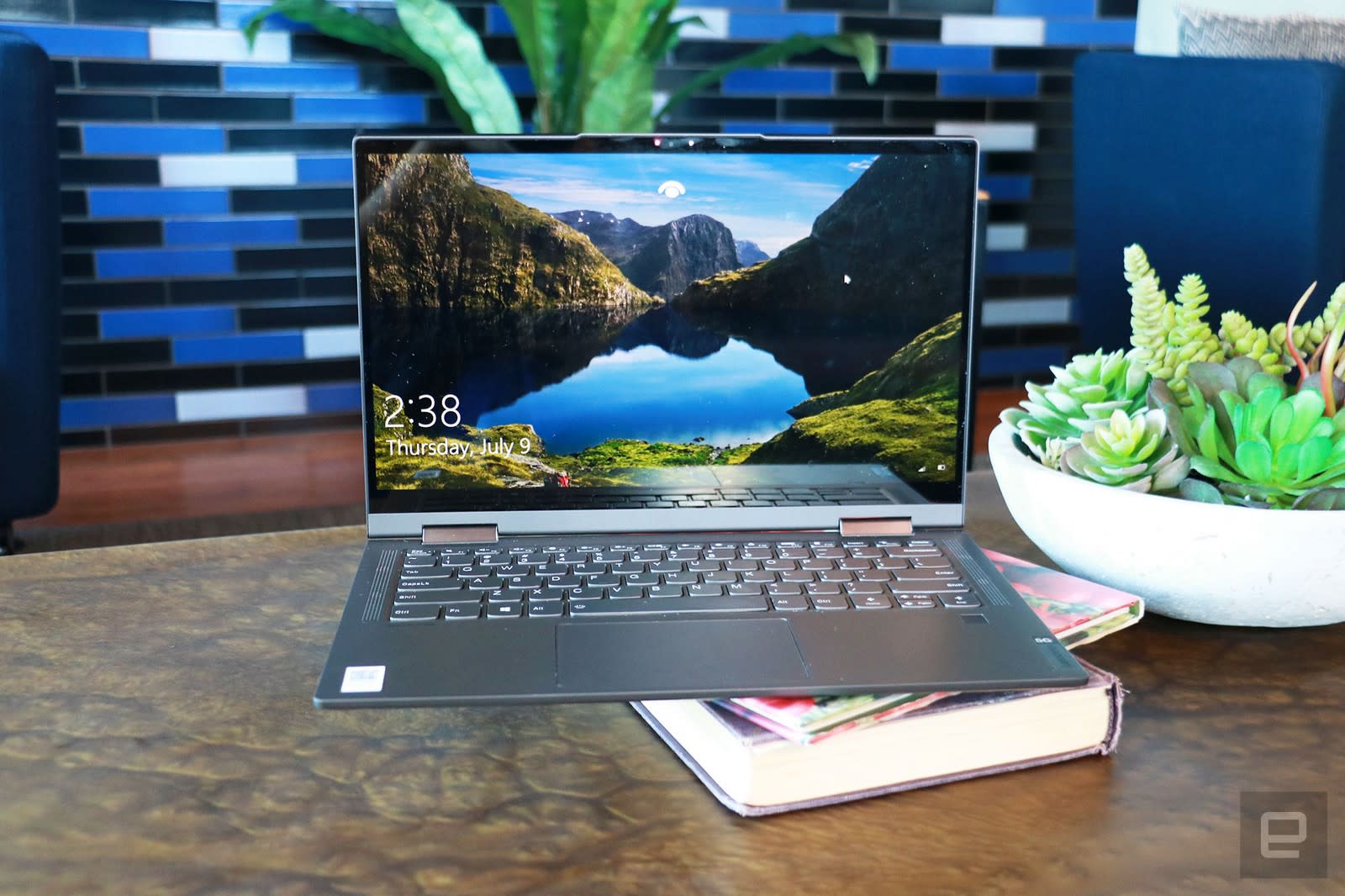 In 2019, Lenovo announced it would be the first to make a 5G laptop with Qualcomm’s Windows on Snapdragon platform. A whole year later, the company finally started selling the Flex 5G, which is available via Verizon for a whopping $1,400. That’s more than the base model of machines like the Dell XPS 13 or MacBook Air. Why is it so expensive -- does it have superpowers? Well, if you consider very long battery life and 5G support superpowers, then the Flex 5G has them. It uses the Snapdragon 8cx chipset that’s similar to the one in the Surface Pro X and the Galaxy Book S. But like every Snapdragon PC out there, this laptop suffers from app compatibility problems and buggy performance.

I’ve been spoiled by the super thin and light notebooks I’ve been testing lately, like the Samsung Galaxy Book Flex and HP’s Elite Dragonfly. In comparison, the Lenovo Flex 5G feels quite chunky. If the HP laptop is a graceful dragonfly and the Galaxy Book Flex an elegant butterfly, the Flex 5G is a dull, unremarkable moth. It’s bigger and heftier, and nowhere near as pretty. Its dark grey-silver color looks dated, while the 0.58-inch profile and 2.97-pound footprint really weigh it down.

Turn on browser notifications to receive breaking news alerts from Engadget
You can disable notifications at any time in your settings menu.
Not now
Lenovo

Part of the reason the Flex 5G is heavier is simply because it is a larger laptop than the competition. As one of the first laptops supporting mmWave 5G, the Flex has limited competition. Add its Snapdragon 8cx chipset and there’s basically no other computer to compare with. The most obvious rivals are the Surface Pro X, which uses a similar CPU and offers LTE instead of 5G, and the Galaxy Book S. We’ve yet to review the latter, though. HP also sells a version of its Elite Dragonfly ultraportable with 5G, but it uses Intel processors.

The Flex has a 14-inch screen, compared to the 13-inch panels on the Surface Pro X and the Galaxy Book S and the HP Elite Dragonfly. That bigger size should mean it has more room for ports, but you’ll only find a pair of USB-C sockets on the left, as well as a power button and headphone jack on the right. Even the much sleeker Galaxy Book Flex offers three USB-C ports and an onboard S Pen. I guess the Flex’s 5G antenna takes up a lot of space.

I do appreciate that Lenovo included a physical switch on the right edge to quickly turn on airplane mode, though. I’m also glad that the bezels surrounding the display are fairly slim, so at least that part feels like a machine made for 2020 rather than 2018 (unlike the Snapdragon 835-powered ASUS NovaGo).

The Flex 5G’s 14-inch full HD display is decent. It won’t knock your socks off, but it is crisp enough that I could make out individual strands of fur on a sloth in a wildlife video. The Surface Pro X has a sharper resolution, but I haven’t really noticed a significant difference. When I watched a trailer for Wonder Woman on the Flex 5G, Diana’s golden lasso and Chris Pine’s shockingly blue eyes also popped. The 400-nit screen was adequate indoors but was hard to read under direct sunlight when I took it out hunting for 5G, though.

The speakers flanking the keyboard could also be better. I barely heard any bass in The Weeknd’s Blinding Lights or Lizzo’s Truth Hurts, and generally songs sounded tinny. To be fair, the Surface Pro X also suffers from thin sounding audio, as do some XPS machines. This is a fairly common problem with laptops, unfortunately.

As with most Lenovo notebooks, the Flex 5G has a very good keyboard, though it’s not as deep or cushy as those on the company’s ThinkPads. Every key is generously sized and the layout is evenly spaced. I’ve spent most of my quarantine on a smaller, 13-inch laptop, so it took my fingers a while to adjust to this wider layout, but everything I needed was within reach.

The Flex 5G’s trackpad is similarly roomy, though sometimes it feels a little sluggish. The cursor movement isn’t as smooth or snappy as on the Galaxy Book Flex, but I had no issues with multi-finger gestures like pinch-to-zoom or switching apps.

To the far right of the trackpad is the laptop’s fingerprint sensor. It works as expected, and offers an alternative to the IR camera above the display for Windows Hello logins. Both biometric login options are fast, so you can choose whichever you prefer. 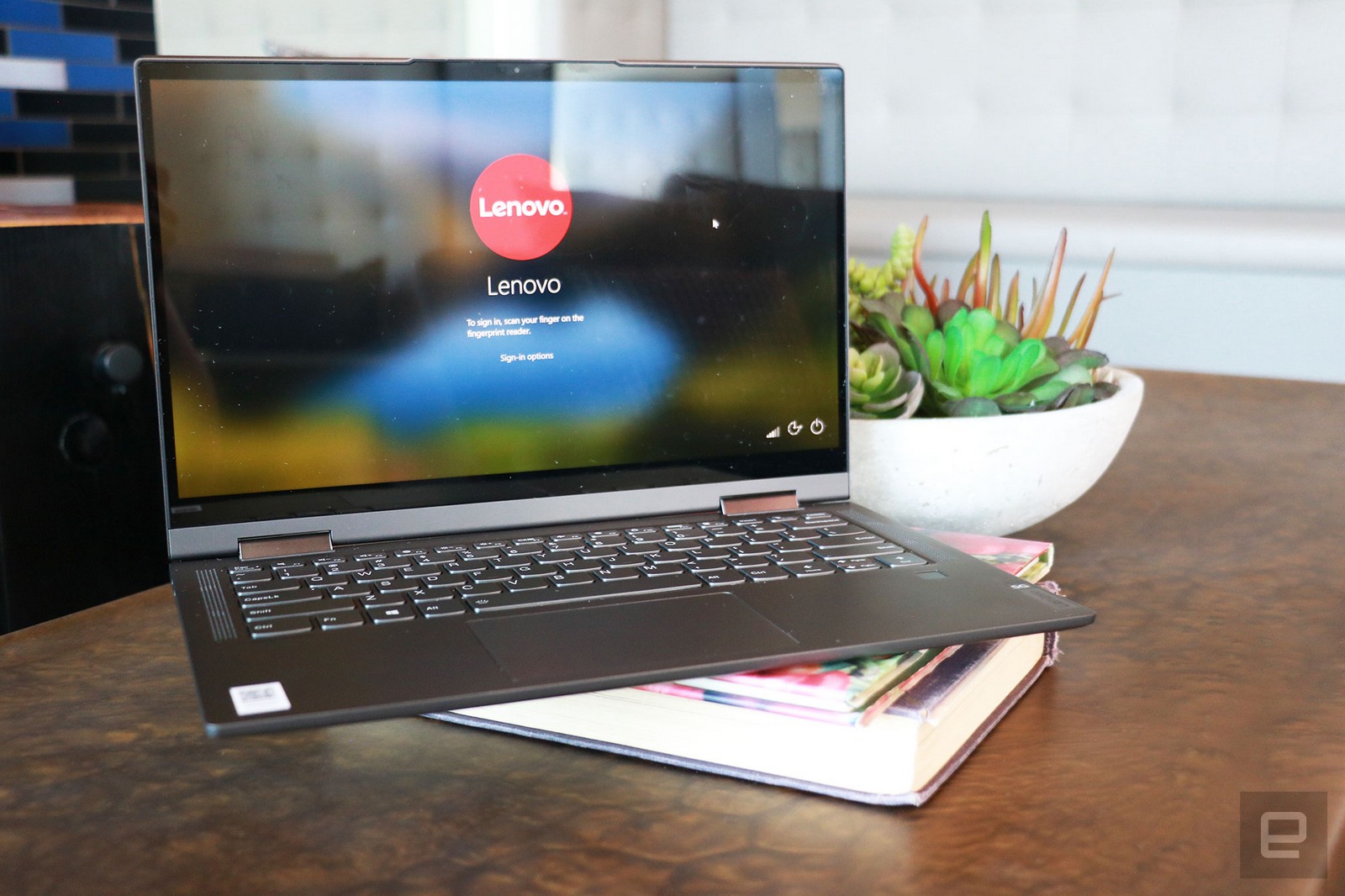 In use and app compatibility

The most fascinating feature of the Flex 5G is the Snapdragon 8cx CPU that keeps it running. It’s similar to the Qualcomm-Microsoft SQ1 chipset that powers the Surface Pro X, and the technical differences aren’t very clear. The 8cx is supposed to provide “extreme” performance for Qualcomm’s Windows on ARM computers, and is meant to compete against Intel’s Y-series chips for thin-and-light notebooks. In addition to the Snapdragon processor, the Flex 5G also comes with the same 8GB of RAM the Surface Pro X offers, though Lenovo provides a 256GB SSD while Microsoft’s only has 128GB at the base level.

The Flex 5G was mostly capable of managing my usual workload… Until it wasn’t. After I drained the battery with our video rundown test and restarted the laptop, getting all my Chrome tabs reloaded and apps running took an excruciating 10 minutes. I just wanted to get back into my Google Doc and address some edits or open Gmail to clear out my inbox, but each tab took minutes -- plural --to load. Even apps that weren’t reliant on an internet connection, like Events viewer or File Explorer, took forever to start. This was not the Always On experience that Qualcomm and Microsoft promised, and it was noticeably slower than other Snapdragon laptops I’ve tested.

I also ran into odd little delays here and there, like an occasional two or three-second stall when I was Alt-Tabbing to other windows or images not loading when I opened them from File Explorer, for example. But these little hiccups aren’t as frustrating as my biggest problem with Windows on ARM: confusing and incomplete app compatibility. I’ve complained about this ever since I reviewed the first Snapdragon PC. Microsoft and Qualcomm have done a lot to make Windows on ARM run better, like improving Chrome performance and adding 64-bit support. I basically live in Chrome, and the browser did feel more stable overall, and battery life seems better than before.

But the problem, as always, comes when you need to install less popular apps. When setting up the Flex 5G, I ran into a snag almost immediately. Handbrake, one of the apps we use to benchmark performance, wouldn’t install, saying it required a 64-bit system and that my PC was only 32-bit. I also tried installing the 64-bit version of Slack and couldn’t, though the 32-bit option worked. It’s infuriating, because according to the system’s “About your PC” page, the Flex 5G runs a “64-bit operating system on an ARM-based processor.” Most of our usual Windows benchmarks also aren’t compatible.

This is a serious problem that Microsoft needs to work on because it’s crippling the entire platform, including the Surface Pro X. I understand that getting widespread app compatibility is hard, but the messaging needs to be clearer. And, more importantly, don’t lie to the user -- if 64-bit apps won’t work, don’t call this a 64-bit operating system.

So, app compatibility sucks, but the Flex 5G does have its merits. One of the highlights is right there in its name: 5G connectivity. Lenovo announced it was making a 5G laptop with Qualcomm back in June 2019, but took a year to actually launch the thing. The company probably needed the extra time to figure out how to get its 5G antennas in the system. The Flex 5G works with both mmWave and sub-6 Ghz technologies for up to 2 Gbps downloads over 5G. And while 5G coverage is still pretty sparse, you’ll get plenty speedy service over gigabit LTE the rest of the time.

Our review unit came with Verizon service and I was able to rely on LTE for all my work. (Note: Verizon is our parent company, but has no control over our editorial content.) I downloaded benchmarks, program installers and even had a four-way video conference with no speed or image quality issues.

The problem with Verizon’s ultra wideband 5G network is that coverage is still pretty sparse. According to the carrier’s maps, I’d have to cross the street or walk down the block for 5G, but even when I went out hunting for a signal, I never found one. It’s nice that Lenovo was able to build support for the super fast mmWave technology that Verizon’s network relies on, but I’m not sure the tradeoff in size and weight are worth it.

At least the company didn’t compromise on battery life for 5G, though. My gosh the battery life on this thing. The multi-day runtime claims here are true. I could generally use the Flex 5G for a whole workday and part of another on a single charge. Since I haven’t been working outside much, I haven’t connected the Flex to 5G, but it’s fair to expect that would ding the battery life a bit.

On our battery test, the Flex 5G’s hit an impressive 16 hour and 47 minutes, beating every other laptop we’ve tested this year by a pretty significant margin. In second place is the Dell XPS 13 with a 15:55 runtime. And that’s despite the fact that the Flex 5G only has a slightly more generous 60 Whr battery compared to Dell’s 56 Whr cell.

The Flex 5G delivers on its two biggest draws: fast cellular speeds and long battery life. But these days, few people are traveling and the need for a long-lasting machine that will stay online when on the go is minimal. Plus, Windows on ARM still needs a lot of work.

The much prettier Surface Pro X starts at $999, and even after adding the keyboard its total of $1,200 is still cheaper than the Flex. The Galaxy Book Flex starts at $1,300, but it uses a more-powerful Intel Core i7 chipset, comes with an S Pen and has a gorgeous QLED screen.

Sure, neither of these machines support 5G (or even LTE in the Samsung laptop’s case). But $1,400 is a lot to pay for a laptop that might not run every app you need. And that’s not counting the extra $15 to $30 a month you’ll have to fork over for a data plan. If you wait till next year to buy a 5G laptop, not only will there be better coverage, but the device will likely be thinner and lighter, too. The Flex 5G is an adequate machine, but it’s not worth buying during a global pandemic and recession.