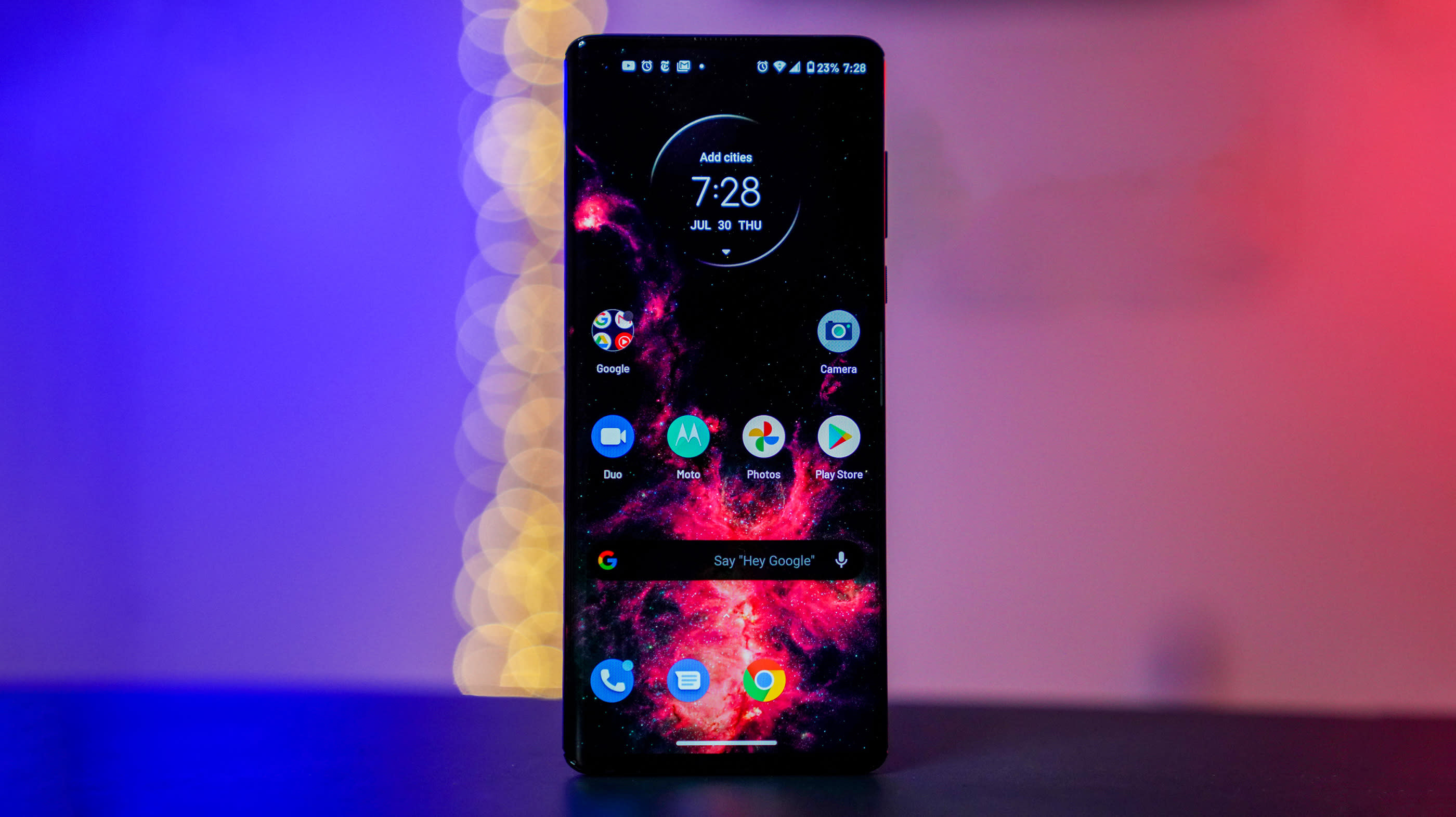 The Motorola Edge is a solid 5G phone with a catch

A great value option, but only for now.

The Motorola Edge is a lot of things. It's a handsome phone, one that looks good enough to pass for something much more expensive. It's the more modest sibling of Motorola's first flagship device in years. And for now, at least, it's a very good deal in the US -- Motorola will sell the Edge for $500 instead of the usual $700 for a "limited time."

Maybe more than anything, though, the Edge is one of Motorola's first attempts at making a new kind of device: An affordable 5G smartphone. It's not alone, either. We're already starting to see a glut of 5G-friendly phones that cost far less than the flagships that first embraced these next-gen networks. There's the LG Velvet, for one, along with Samsung's Galaxy A71 5G, the OnePlus Nord, the TCL 10 5G, and plenty more that aren't being sold in the US. Point is, smartphone makers are already competing hard to win this new slice of the market, and Motorola is in the thick of this fight. So, how does the Edge stack up?

Author's note: It's been pretty hectic around here lately, and I haven't been able to test the Motorola Edge as thoroughly as I would like. That's why we're not calling this a review -- for now, anyway. As I continue to use the phone and compare it to a growing number of competitors, I'll update this story with further impressions and eventually a full review score.

More of the same

To understand the Edge, you need to take a step back and consider its premium sibling, the Verizon-exclusive Edge Plus. After four years of focusing on cheap phones that make consistently solid money, Motorola took a stab at a proper, premium smartphone, with high-end everythings and an eye-catching design to boot. Then, it swapped some slightly more modest components into the same body and shipped it as the Edge.

That's a somewhat reductive way to look at things, but it's accurate all the same. Motorola gave the Edge a Snapdragon 765G chipset -- the very same one that powers all of its rivals -- and a 4,500mAh battery. It fitted the phone with 6GB of RAM instead of 12GB. (In the US, anyway; some international versions only have 4GB, which definitely isn't great.) Motorola also went with a 64MP main camera for the Edge rather than one of Samsung's 108MP sensors, and, well, that's about it. The rest of the package, from the Endless Edge screen to the speakers to the headphone jack and microSD card slot, has been left completely untouched.

It's like Motorola went across the board and dialed everything back just a little -- enough to take the Edge out of flagship territory, but not enough to spoil most of what it got right with the Edge Plus. 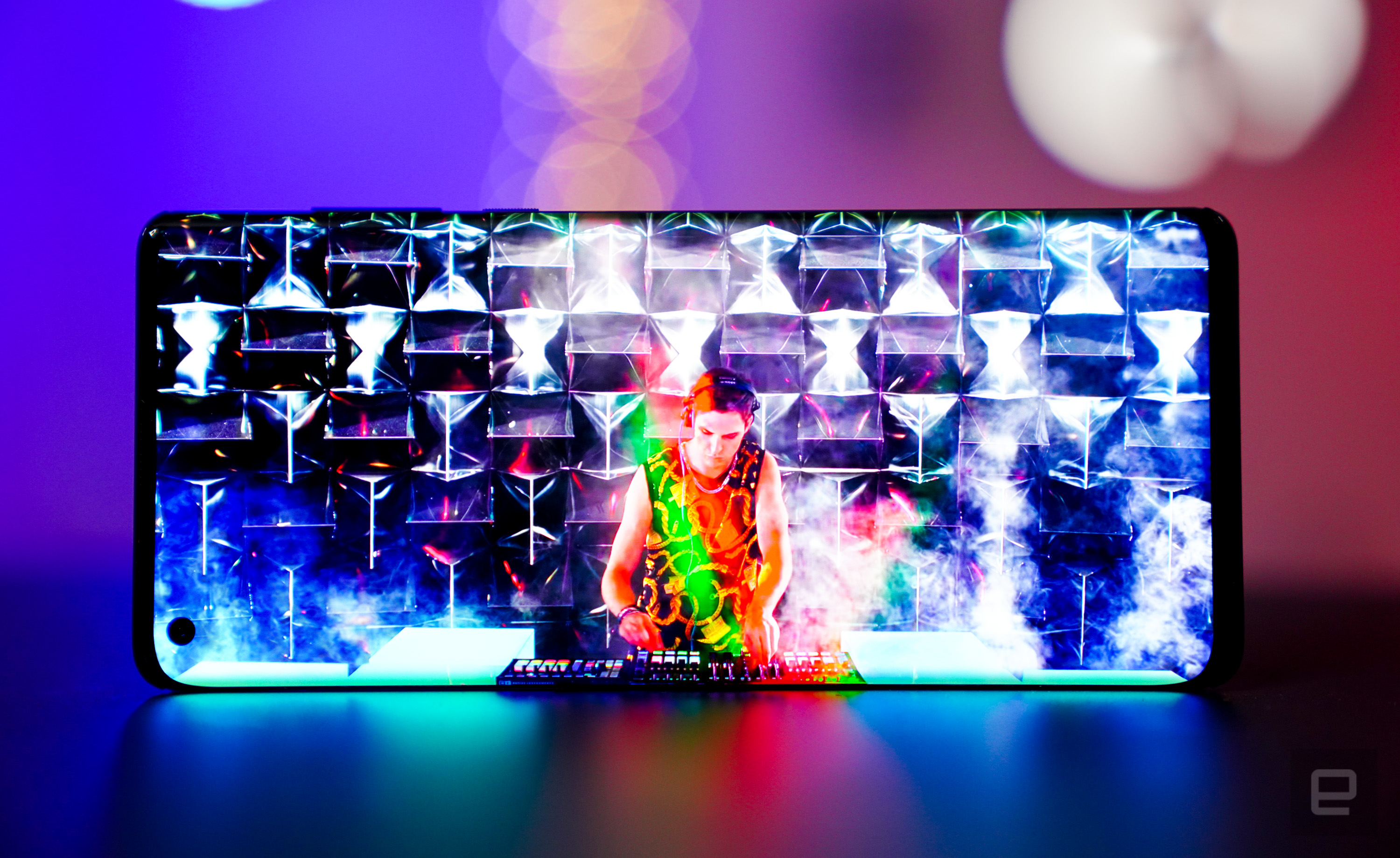 Motorola transplanted the screen from the Edge Plus straight into the Edge, and trust me -- that's a good thing. This 6.7-inch Endless Edge display was one of the Edge Plus's standout features, and while it wasn't as technically impressive as the screens Samsung and OnePlus used in their flagships, it absolutely shines in this lower-cost package.

This OLED display runs at 2,340x1,080, and it refreshes at 90Hz -- a relative rarity in devices that cost this much. More importantly, it's just really nice to look at. I prefer my colors as punchy as possible, so the neutral tones the screen offers by default felt a little lacking. Still, that's nothing a quick trip into the phone's settings can't fix. The screen's 19.5:9 aspect ratio and support for HDR10 also make it an excellent choice for binging movies while lazing around the house, though its size means people with smaller hands will need both of them to handle this thing. My only real gripe so far is how some noise is apparent when looking at dark images or backgrounds while the screen's brightness is bottomed out, but honestly -- it's the kind of problem you really need to be looking out for to notice.

The screen gets its name for the way its edges cascade around the sides of the phone, and whether that'll work is largely a matter of taste. Some reviewers have had issues with flaky palm rejection, leading to accidental touches on this expansive screen, but that has rarely happened to me. (I'm still shocked, considering just how big my palms are.) Thankfully, the rest of Motorola's screen-centric software tweaks are just as helpful. You'll find a pill on the side of the screen you can flick up and down to access your notification shade and app drawer, just as if you were performing those gestures in the middle of the screen. And an app called Moto Gametime also lets you place virtual shoulder buttons on the edges of the screen, which offers much-needed extra control for games like Call of Duty: Mobile and Forza.

Speaking of games, the octa-core Snapdragon 765G packs more than enough horsepower to tackle most games with ease. That's partially because Motorola went with the 765G instead of the standard 765 -- it can hit a marginally higher maximum clock speed, so it packs some extra (and welcome) oomph. Just bear in mind that, if you take gaming on your phone very seriously, you'll probably want to splurge on a phone with a Snapdragon 865 instead. 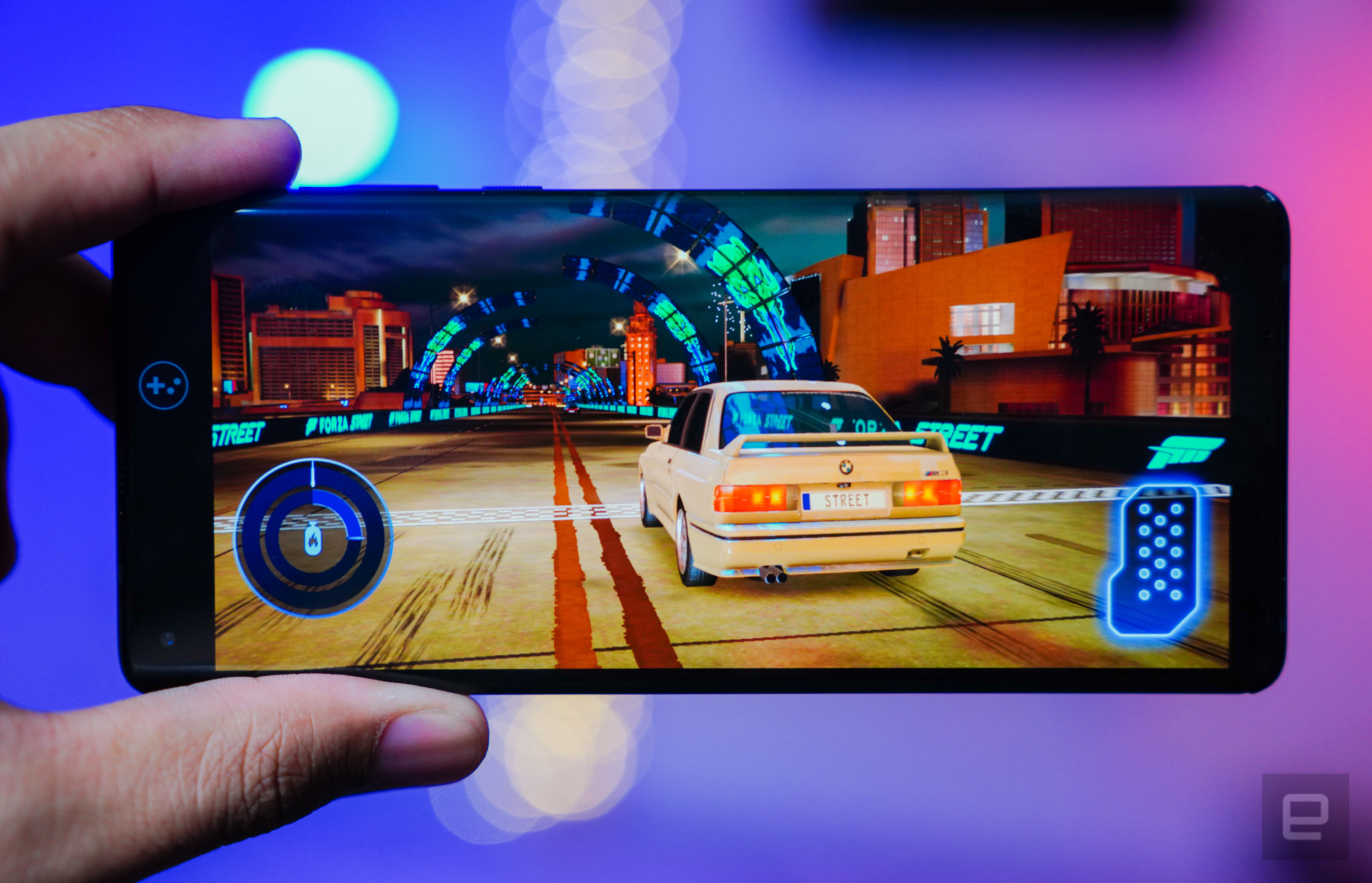 Honestly, though, I was surprised by how little I missed that high-end processor. I've been editing photos in Lightroom, piecing together short videos in Premiere Rush and meticulously tracking projects in Notion, and the Edge handled all of it beautifully. I occasionally noticed hints of slowdown here and there, as I have with some other 765 phones, but never to the point where the Edge felt compromised. Of course, Motorola's approach to software probably helps too -- there's little in the way of bloat here, and the company has almost certainly made some under-the-hood tweaks to get the Edge running as smoothly as it does. It still doesn't run at flagship levels of performance, but for most tasks and most people, it's close enough.

And best of all, the Edge's battery life has been very solid. Motorola claims you can get up to two days of use off a single charge, and that's sort of true -- if you disable the 90Hz screen refresh and baby the phone, two days is certainly possible. Most of the time, though, the Edge's 4,500mAh battery easily got me through a full day and stuck around all morning the next day. Really, the only times I got less than a day of use from the Edge were when I forced the screen to refresh at 90Hz constantly and really went to town on Premiere Rush projects. That sort of workload will take a toll on any smartphone, though, and the Edge gets credit for lasting as long as it does. 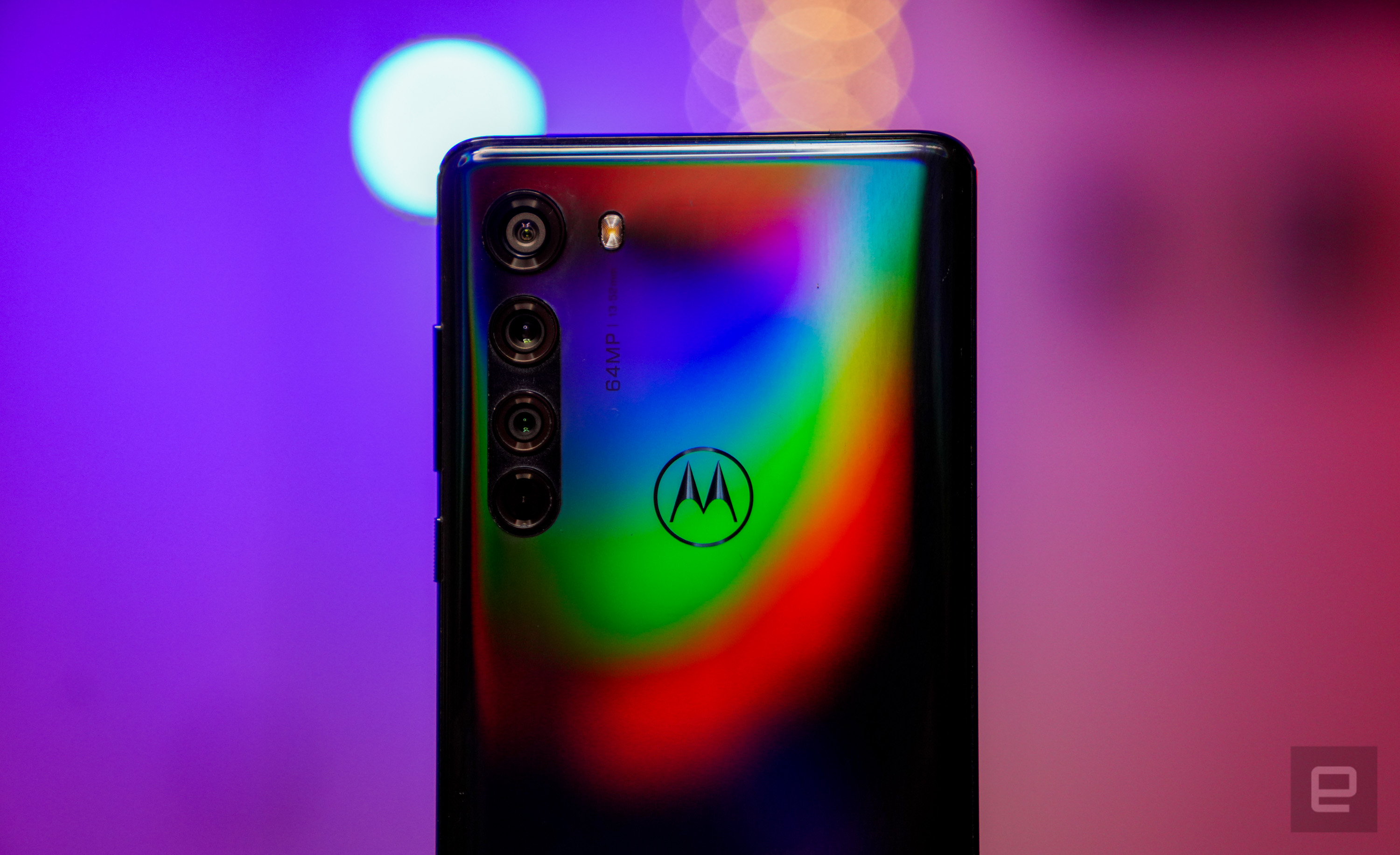 Because the Edge doesn't stray far from the Edge Plus formula, it unfortunately inherited most of that more expensive phone's shortcomings. For one, the in-display fingerprint sensor isn't particularly great -- when it wants to work, it does, but it frequently stumbles over my thumbprint. (I've tried re-enrolling that finger multiple times, all with the same result.)

And the Waves Audio-tuned speakers Motorola seemed so proud of the first time round still just aren't that impressive. One fires downward, the other fires at you, and occasionally they sound pleasant enough working in tandem. They're certainly loud enough, too.  The issue is that my music often came through feeling hollow and unsatisfying, to the point where I had to reach for my headphones. Here's a tip, Motorola: If you really want to put high-quality stereo speakers in your phones, maybe find a way to point both of them at your listener.

Then there are the cameras. The Motorola Edge has three of them around back, plus a time-of-flight sensor for depth information. You'll spend most of your time with the 64-megapixel main camera, with its f/1.8 aperture. It's capable of taking satisfying photos when there's plenty of ambient light but often struggles to expose scenes correctly and produces surprisingly drab colors. (Here's hoping Motorola can fix these issues with a software update.) Unfortunately, it lacks the optical image stabilization found in the Edge Plus's 108-megapixel main camera, and low-light performance is middling at best. In fact, the one trait this camera shares with the Edge Plus's main camera is their tendency to shoot pretty good -- but never great -- photos.

The 16MP ultrawide camera has an f/2.2 aperture and captures a 117-degree field of view, which leads me to believe it's the same camera the Edge Plus uses. It does a nice job capturing vistas during the day and sometimes did better at producing vivid colors than the main sensor. The macro feature is surprisingly fun too -- if you're anything like me, you'll find yourself using it a lot more often than you'd expect. Low-light performance is pretty weak, though, especially since the phone's Night Mode doesn't work with this camera.

Finally, there's an 8-megapixel telephoto camera with 2x optical zoom and an f/2.4 aperture. It'll do in a pinch, especially since rivals like the LG Velvet don't have a telephoto camera at all. What can I say? It's about as unremarkable as the main camera, though it serves its purpose well.

To be clear, none of these cameras are terrible -- far from it. It's just that they rarely do much better than "adequate," and while that's understandable for a $500 phone, that level of quality will be harder to swallow when the Edge reverts to its original price.

Oh, and there's one more thing: Motorola has confirmed that the Edge will only get a single major Android software update. Bear in mind, after a bit of backlash earlier this year, Motorola reversed a similar policy for the Edge Plus. Why it didn't just make the same decision for the Edge isn't clear, but when you consider that many of the Edge's competitors will get at least two years of Android updates, 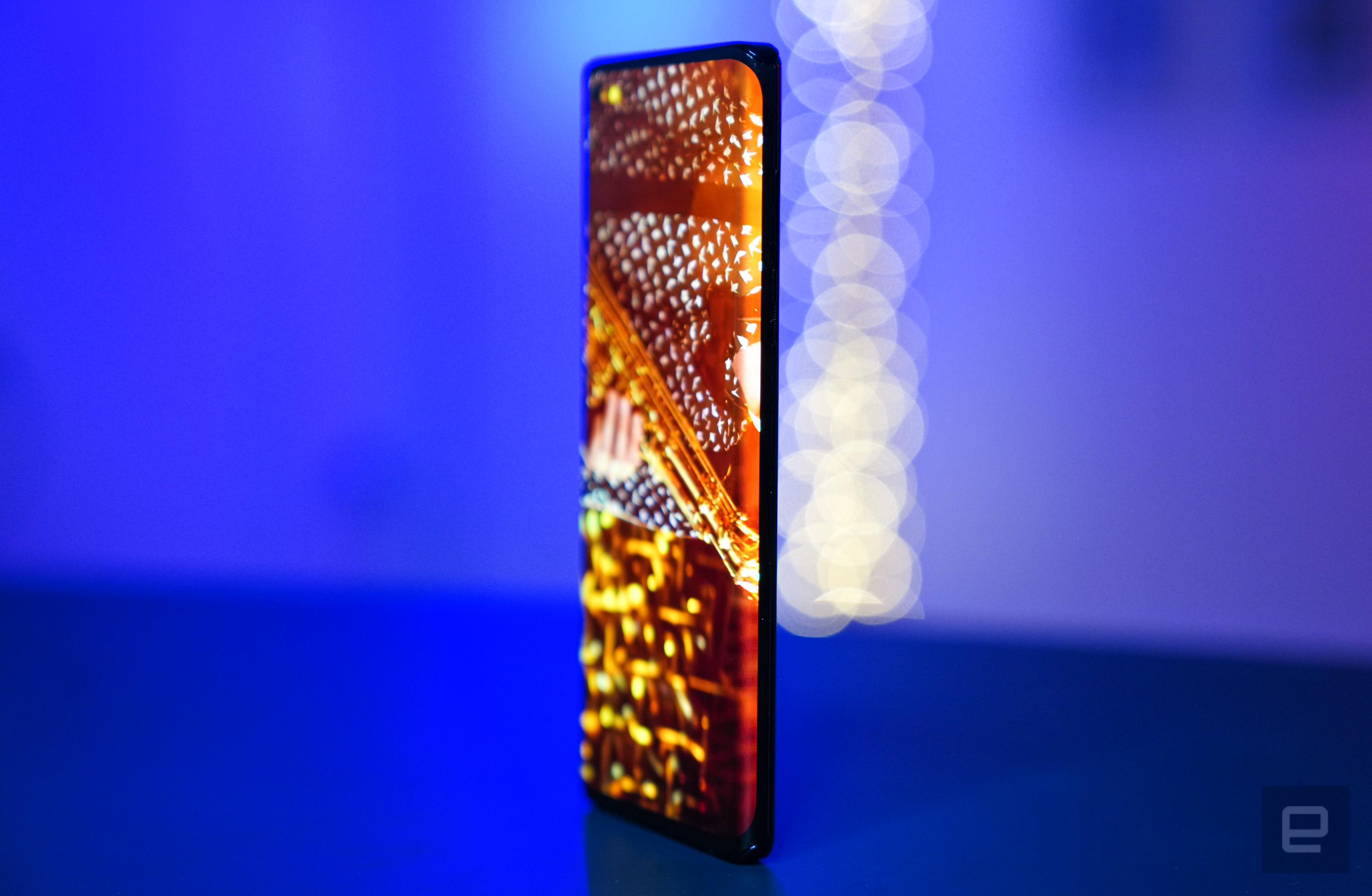 At $500, the Motorola Edge is kind of a no-brainer. Sure, the cameras are pretty weak, and its fingerprint sensor is too finicky. For me at least, the Edge gets nearly everything else right -- or close to it. The problem is, as I've mentioned, the Edge isn't alone. LG's Velvet is a stylish option that plays nice with an oddball dual-screen case for $600. If you live in a country where the OnePlus Nord is available, it's shaping up to be a fantastic option for just under $500. And if you just like Samsung more, the Galaxy A71 5G is selling for between $600 and $680.

Once Motorola's early promotion runs out, the Edge will cost more than all of these phones. Maybe for some people, the Endless Edge display will be enough to justify the difference in price. For the more price-conscious people who these devices are meant for, though, that higher price tag may just turn them off entirely. I'll keep testing the Edge to see if it can make me a believer, but for now, it really feels like the best thing Motorola could do is make some of the phone's shortcomings easier to swallow by making that price cut permanent.