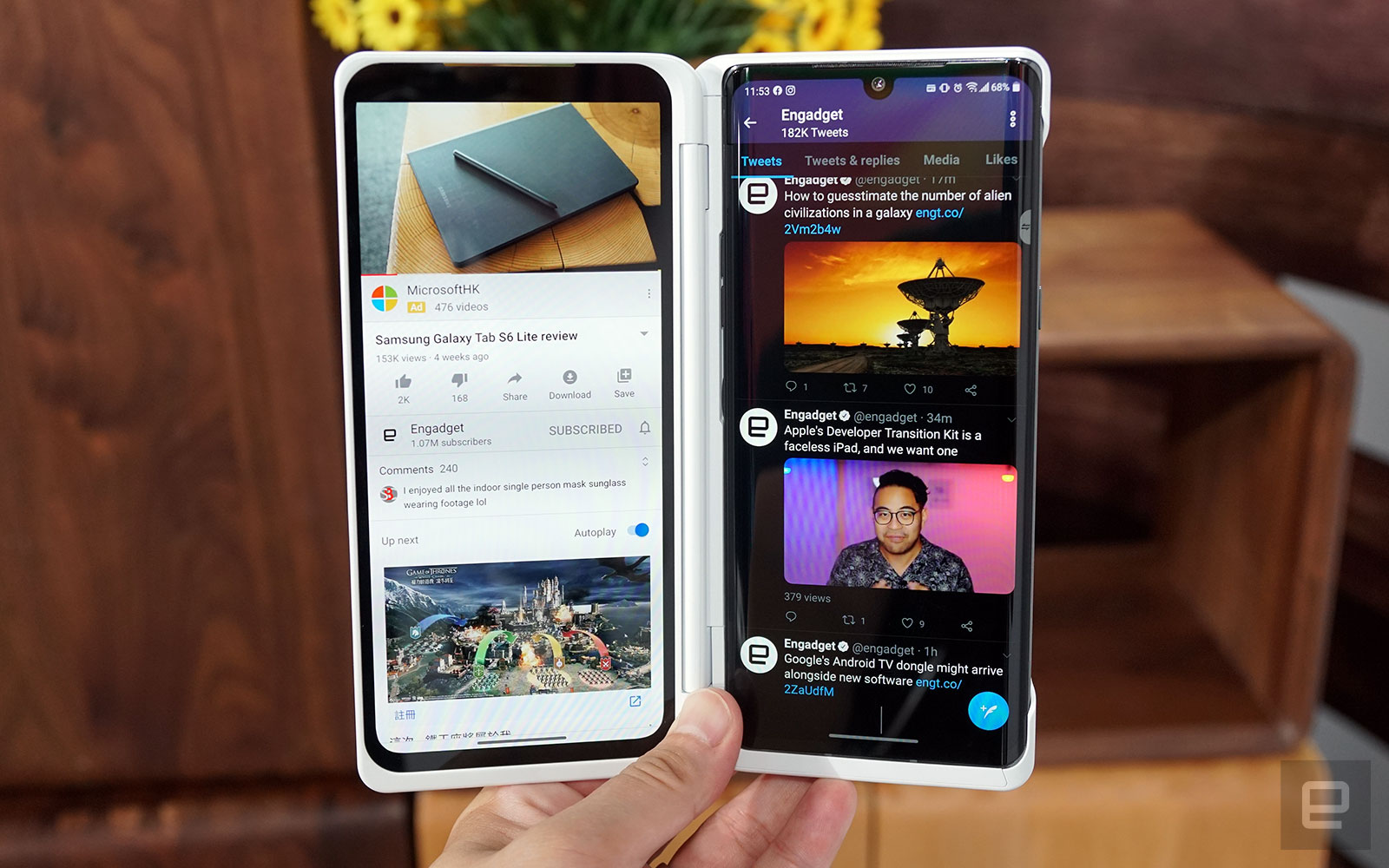 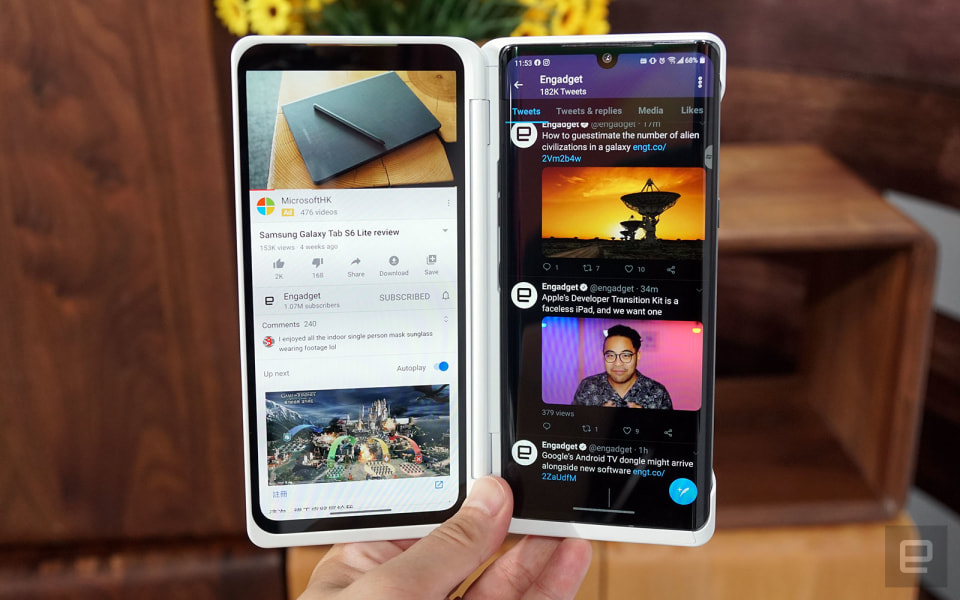 It’s no secret that LG’s been struggling with its smartphones for some time; now, it’s betting on a new strategy. Following the V60 ThinQ 5G, the Korean conglomerate is shifting away from its flagship G and V series to focus on an entirely new approach, the first result being the Velvet. It’s a (heavily teased) 5G midrange phone with a new look and some flagship qualities that it inherited from the V60. I’ve been using a Korean retail unit with its Dual Screen case -- here’s how it fared. 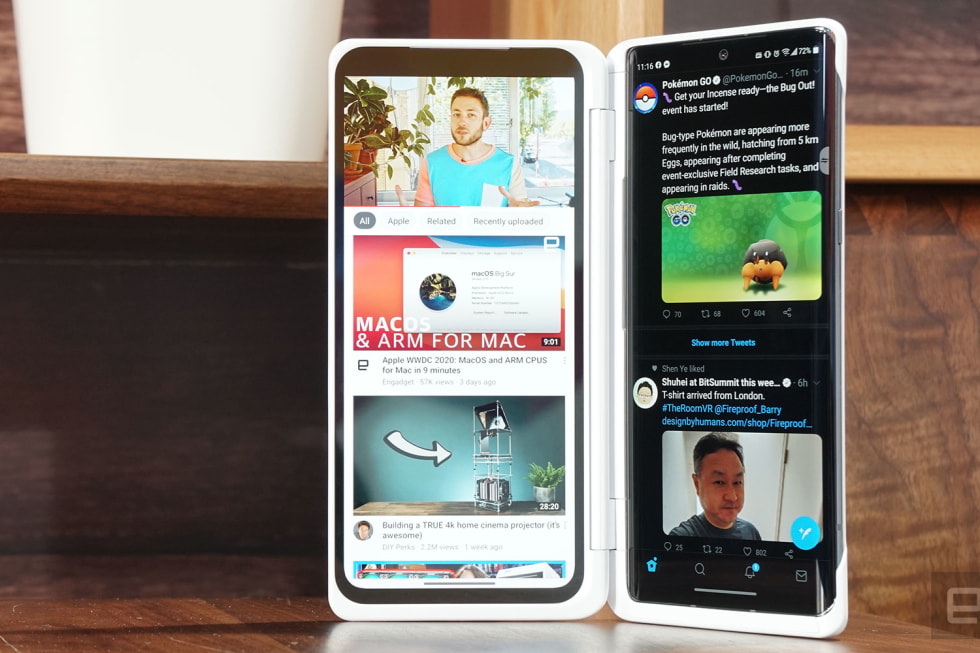 As someone who has already tried to live with LG’s G8X ThinQ Dual Screen, I immediately noticed how much lighter the dual-screen Velvet was, especially compared to the more recent flagship V60 -- 309g vs 350g. Now weighing less, LG’s Dual Screen design finally makes sense for everyday use.

The Velvet’s Dual Screen case has the same 360-degree hinge as V60 and G8X cases. The cover opens up smoothly (but thankfully not loosely), stops briefly at 180 degrees, then continues all the way to 360 degrees. When closed, the Velvet’s case has a 2.1-inch monochrome display on the cover to show the time, date and notifications. To pick up incoming calls, you just hit the dedicated Google Assistant Key instead of flipping the cover open.

One small annoyance here is you still need to use the bundled magnetic USB-C adapter to charge the encased phone (up to Quick Charge 4+), so make sure you don’t lose it. Luckily, you can also use wireless charging (up to 10W), with or without the case.

Since the G8X, LG has enhanced Dual Screen mode, using elements passed down from the $900 V60 to the $700 Velvet. My favorite is the Multi App Shortcuts, which let you launch two predefined apps on both screens, simultaneously. LG also included some pre-made shortcuts to help boost productivity and to inspire users: Gallery with Camera, Gallery with QMemo+ (LG’s note-taking app) and HD Audio Record with QMemo+.

I set up single-click shortcuts on the home screen so I can watch YouTube on the secondary screen while scrolling either Facebook or Twitter on the main screen and save some taps. (I could then set the Velvet to “laptop” and watch full-screen YouTube on the propped-up screen.)

My only wish here is for the ability to launch two split-screen apps on the phone’s screen, so I could still watch videos on the secondary screen while scrolling socials on the right (split screen isn’t allowed on the left screen, for some reason).

Another handy Dual Screen feature is Wide View, which stretches a single app across both screens. The list of compatible apps is still rather short, though -- just the core apps from Google, at the moment. The feature makes sense for Chrome, Gmail, Maps and Photos, so long as you don’t mind the hilariously wide gap between the two screens.

Going back to the phone itself, the Velvet will launch in six colors with  more to come later. The low-key “New Black” unit I received had a glossy ceramic-like finish. The tapered edges and back help make the Velvet look even slimmer than it already is.

Part of that is courtesy of the Snapdragon 765G processor which, despite being a midrange chipset, is the first Qualcomm silicon to integrate a 5G modem, saving a bit of space inside the device. Alas, the trade-off here is a 4,300mAh battery, which is significantly smaller than the V60’s 5,000mAh. This may be fine for the phone, given the less-demanding processor, but I doubt it’d be sufficient for all-day use in dual-screen mode.

The rest of the Velvet is very much a midrange device elevated by some premium features. You still get an in-display fingerprint reader, microSD expansion, stereo speakers and IP68 protection against dust and liquids. As with all LG flagships, the Velvet comes with a 3.5mm headphone jack, which isn’t often on other brands’ flagships.

Compared to the pricier V60, it misses  the extra processing power, extra battery, faster LPDDR5 RAM and WiFi 6 -- but that’s fine. I just wish LG could do something about the slightly laggy scrolling experience. To be fair, I am accustomed to the silky smooth 120Hz display on my current phone, the (more expensive) Oppo Find X2 Pro, but I think LG could make improvements to the touch response, scrolling and animation speeds within Android. Likewise, there’s room for improvement with gesture navigation -- I don’t understand why LG wouldn’t let me use the back gesture within the virtual keyboard area.

On the photography side, the Velvet has a totally different set of cameras to previous LG phones. While I’m a fan of the “raindrop” camera arrangement on the back (as opposed to the “camera island” design), my quick test with the 48-megapixel main camera and the 8-megapixel ultra-wide camera produced mediocre results.

It over-sharpened photos and lost details -- likely due to noise compression and lack of optical image stabilization (OIS). This was especially true with indoor and night-time shots. They’re OK for a midrange phone, but OK may not be good enough. There's a lot of competition these days. 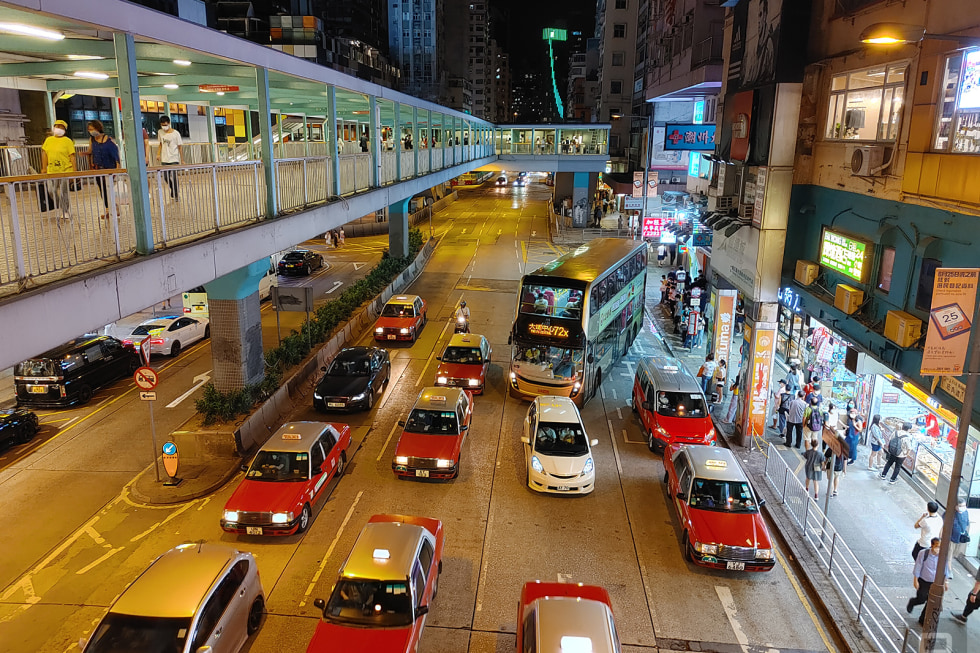 Despite these drawbacks, the Velvet’s main camera still provides video goodies like up to 4K 30 fps capture, ASMR recording, “voice bokeh” (lets you focus on a subject’s voice) and 4K time-lapse -- not bad for a midranger. Better yet, the 16-megapixel front camera is pretty decent -- my selfies came out with the right amount of detail and I had the option to smooth my skin.

Unfortunately, the 5G radio on my Korean Velvet didn’t work in Hong Kong, so I couldn’t appreciate that particular feature. Other than that, it’s safe to say that this is by far the best (and most affordable) dual-screen offering from LG yet. It’s the next best thing to a foldable phone. It’s also far less fragile than Samsung’s Galaxy Fold, and you only have to pay around $700 instead of $2,000.

If LG could fix the touch issues and throw in the Dual Screen case for free (as all three major US carriers did for the V60), then the Velvet could be a fun option that’s not entirely gimmicky. The phone is already available in key European markets, and the US will apparently follow “in the weeks ahead” -- you’ll know as soon as we do.

In this article: lg velvet, smartphone, snapdragon 765g, lg, velvet, dual screen case, lg dual screen, hands-on, dual screen, news, gear
All products recommended by Engadget are selected by our editorial team, independent of our parent company. Some of our stories include affiliate links. If you buy something through one of these links, we may earn an affiliate commission.