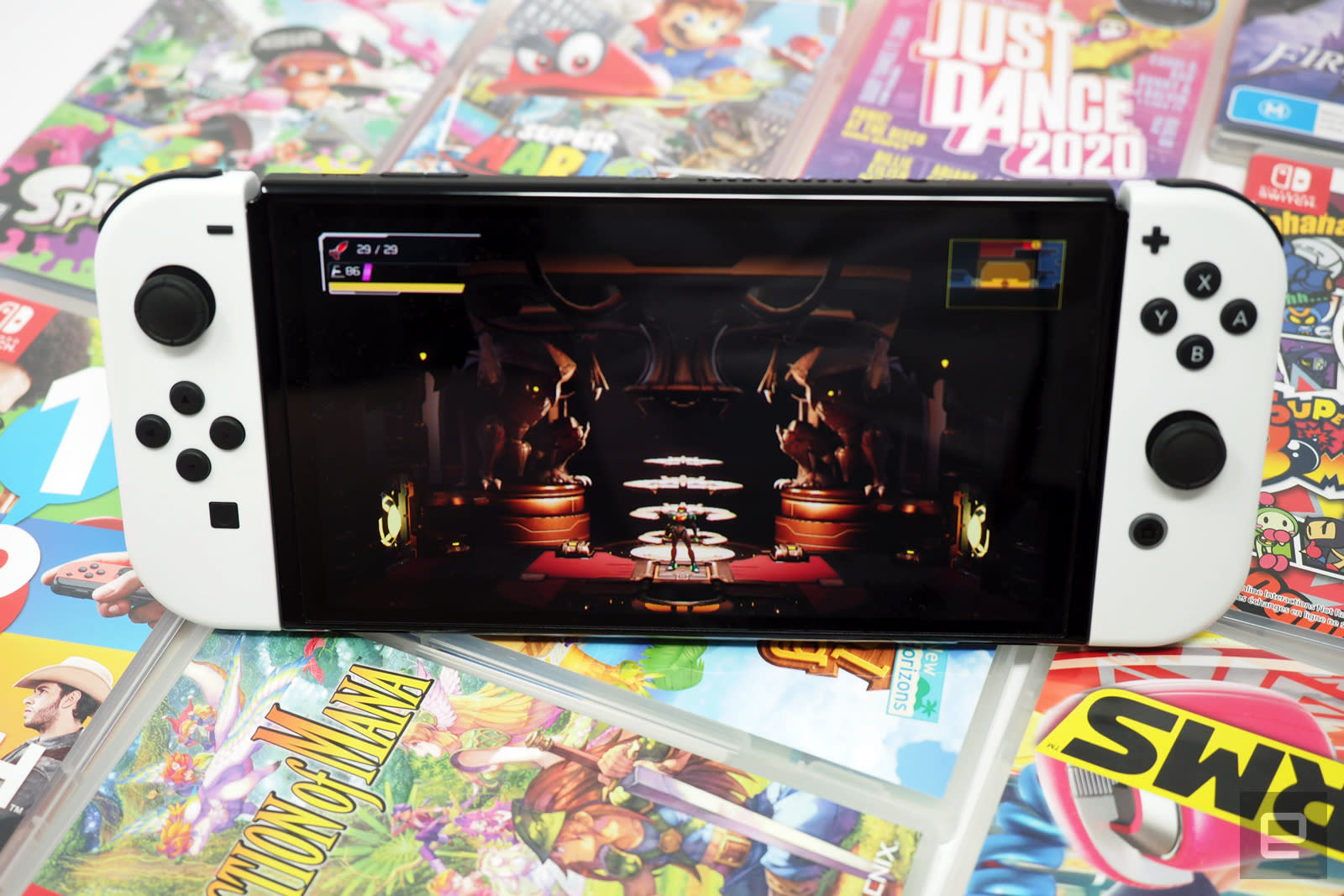 89
Samus Aran in a save point Kris Naudus / Engadget

Nintendo Switch OLED review: Beautiful, but not a must-have

Though they don’t come out with the annual frequency of an iPhone, video game consoles can always be counted on to have a few mid-cycle refreshes (think: the PlayStation 4 Pro or Xbox One X). This week it’s Nintendo giving the OG Switch a makeover, adding an OLED screen and a few other exterior tweaks. But it’s basically the same system on the inside, so don’t call it the Switch Pro. It’s officially dubbed the Nintendo Switch OLED, because calling it the “slightly nicer Switch” doesn’t really move units from the shelves. If you’ve already invested in a Switch or Switch Lite you won’t need the upgrade, but if you’re still Switch-less this is the model to buy.

It’s $50 more than the original, which is not being pulled from shelves just yet. For $350, the new Switch has a full 7-inch OLED screen, a step up from the older model’s 6.2-inch display. The larger screen size is appreciated, though after six hours of playing it in handheld mode I didn’t notice the difference as much.

What did catch my attention when I switched back to the original were the chunky bezels around the 6.2-inch display. I’ve never liked them and found them to be one of the least attractive things about the system. Now they make me recoil in disgust when I compare them to the OLED model’s slim lines, which have been whittled to a third of the size. The matte plastic frame around the screen has also shrunk and changed to a glossy plastic, making it even less obtrusive.

As for the display itself: yes, it is noticeably brighter. There’s enough of a difference that in my initial hands-on I was dismayed when I returned to my personal Switch at home hours later. When placed side by side, the difference is undeniable. The colors pop just a bit more, the blacks are deeper and the whites are… more white, with the original having a slight lavender tint in contrast to the purer white of the OLED screen.

While not every game will benefit from better colors, Nintendo is also releasing Metroid Dread the same day. Like all titles in the series, the game traffics in a lot of dark spaces, with the bright pop of Samus’ red and yellow (or blue) armor contrasting nicely alongside backgrounds of brown and gray. It’s a good showcase for the OLED’s improved color fidelity and just a nice-looking game in general, which distracts from the fact that the new Switch doesn’t bring any actual improvements under the hood.

The CPU and GPU go unaltered, which ensures that all future Switch titles remain compatible with existing Switch and Switch Lite systems. This is pretty much in keeping with the Game Boy Advance and 3DS lines of products, which saw some radical redesigns like the Game Boy micro and 2DS over their lifespans. Sure, there were handhelds like the DSi and New 3DS that came with improved internal specs, but those never saw widespread adoption. The Switch OLED is a lot more like the Game Boy Advance SP: significant improvements to the display and form factor, but the same old library of games.

Alongside that new display are a bunch of minor tweaks that don’t seem like much when considered individually, but as a whole really improve the experience. The most notable is the new stand on the back. The one on the original Switch is small and roughly a finger’s width, with only two positions: open and closed. The one on my original launch unit no longer locks in the “closed” position and has a tendency to flop out when I’m playing in handheld mode. It also detaches completely if you look at it funny.

The Switch OLED’s stand is an entirely different beast. Instead of a skinny little strip, it’s now a Microsoft Surface-style panel that stretches across the back of the entire unit, with real hinges that can be left in a number of positions so you can now put your unit at whatever angle you prefer. I wouldn’t try to pull this thing off; the hinges are actually molded into the plastic, so if you do break it, it’ll have to go off to the Nintendo repair shop to get fixed up.

To accommodate the new stand a bunch of stuff has been moved around on the back of the Switch unit. The logo is now printed on the stand itself, so it’s been moved to the lower half of the rear. The manufacturing info, like the parts number and voltage, is now printed in black on the black plastic, underneath the stand. So it’s doubly hidden — a subtle but welcome improvement. The rear speakers have been moved to the bottom edge of the unit, where they also serve as a way to pull the stand out. It’s actually very thoughtful, while providing clear game audio and minimizing system noise. And, while the microSD hasn’t been completely relocated, it’s now placed parallel to the bottom edge. I assume this small change is to keep users from accidentally pulling out the card when they’re trying to adjust the stand. The one thing that hasn’t been relocated is the USB-C port on the bottom, so you still can’t recharge it in tabletop mode.

There are fewer changes to the device’s top edge, with the most notable being a button redesign resulting in longer, thinner power and volume switches. The new buttons aren’t easier to hit, but they do look sleeker and feel better under my fingers thanks to the textured plastic of the Switch OLED. The system is actually just nicer to hold now, like when it kept the sweat from pooling under my clammy hands during a particularly stressful boss fight in Metroid Dread.

Because the Switch OLED has to be compatible with all existing accessories, that means the unit is the same height and width as the original model. The Joy-Cons haven’t gotten a redesign, but hopefully the infamous “Joy-Con drift” has been eradicated by now. The new black and white color scheme is very nice, a step up from my all-gray launch unit in terms of style. If you like a more playful color palette, the Switch OLED can also be bought with red and blue Joy-Cons, or you can swap any other Joy-Cons you want. But the white ones don’t show scratches as easily as the other shades, so they’ll look spiffy for longer.

The one change in the system’s dimensions is the weight, thanks to the OLED screen. When handling the original and new Switch side by side, the difference is undeniable. But it’s not a big enough divide to make the Switch OLED less portable in any way. Subjectively, it might actually seem a bit lighter, possibly because the weight is well-distributed. The one thing about the build that feels like a step down is that the OLED model has a tiny bit of flex in the middle of the rear panel that’s not present in the original. However, it doesn’t make much of a difference to the build quality unless you’re planning to take a hammer to the back of the unit.

Because the system keeps the same internals, that means the battery has gone unchanged as well. It’s the same as the refreshed 2019 battery, which offers between four and nine hours of battery life compared to the launch unit’s cap of six hours. However, the new OLED should be more power-efficient than the LCD, and in use it appears to be. I got almost seven hours of Metroid Dread before I got the “low battery” warning at 15 percent, and that’s a game that makes frequent use of vibration. Compare that to the four or five hours I tend to get out of my OG Switch, even when playing something fairly tame like Animal Crossing or Untitled Goose Game.

If you already have an existing Switch, you can drop the OLED model into your current dock and it will work just fine. But the system does come with its own, redesigned dock that you might want to set up. It looks a lot nicer thanks to its rounded corners and glossy black plastic on the inside (which admittedly will probably scratch up over time). The back panel isn’t great, as it feels flimsy and can come off completely (so you may lose it). But all of these are outweighed by the important addition of an ethernet port.

Prior to this, the Switch has always been intended as a wireless system, and it hasn’t been stellar. Early models had a tendency to “forget” how to connect to your WiFi, forcing you to restart the system. And even now, downloading from the Nintendo eShop can be pokey; even with the OLED model I had to leave my system sitting for an hour or two while it downloaded games wirelessly. But now you can just plug in a cable for a faster, more reliable connection. If you have one in your living room, that is. Many people don’t, which makes this a feature for the more technical-minded fans. It’s the one new feature of the Switch OLED that I would consider “pro” level, and if you have a place to plug in it’s certainly worth the $50 premium.

Overall, the Switch OLED is a nice system coming out at an odd time, as it’s been over four years since the release of the original Switch. Based on Nintendo’s past release history, that would indicate a new console some time around 2023. So it’s a big ask of people to buy a $350 system if something better is just around the corner. (Nintendo has categorically denied that it has plans for a new Switch as recently as last week, but that doesn’t preclude that one will come out eventually.)

There’s also the specter of the Steam Deck in December, just two short months from now (assuming no delays). It's far more powerful than the Switch, and is also much larger, but promises access to almost the entire Steam library, which happens to overlap with the current Nintendo eShop quite a bit. The biggest selling point for the Switch OLED is access to storied franchises like Mario and Zelda, as well as the incredible bargain that is Switch Online. But you don’t need an OLED screen or wired ethernet to enjoy old NES, SNES, N64 and Genesis titles.

If you’re not going to be able to plug it into ethernet, or don’t need better speeds because you play offline all the time, the choice to upgrade to a Switch OLED is tricky. If you always play on the TV, there’s absolutely no point in buying this one, as there’s no difference in the dock’s output quality. It’s going to look the same as it always has, as this is most definitely not the rumored upgrade to 4K. But even if you’re a handheld player it’s not a must-have, unless you’ve given up on your original Switch because you just really, really hate LCD displays, or absolutely need more than five hours of battery life.