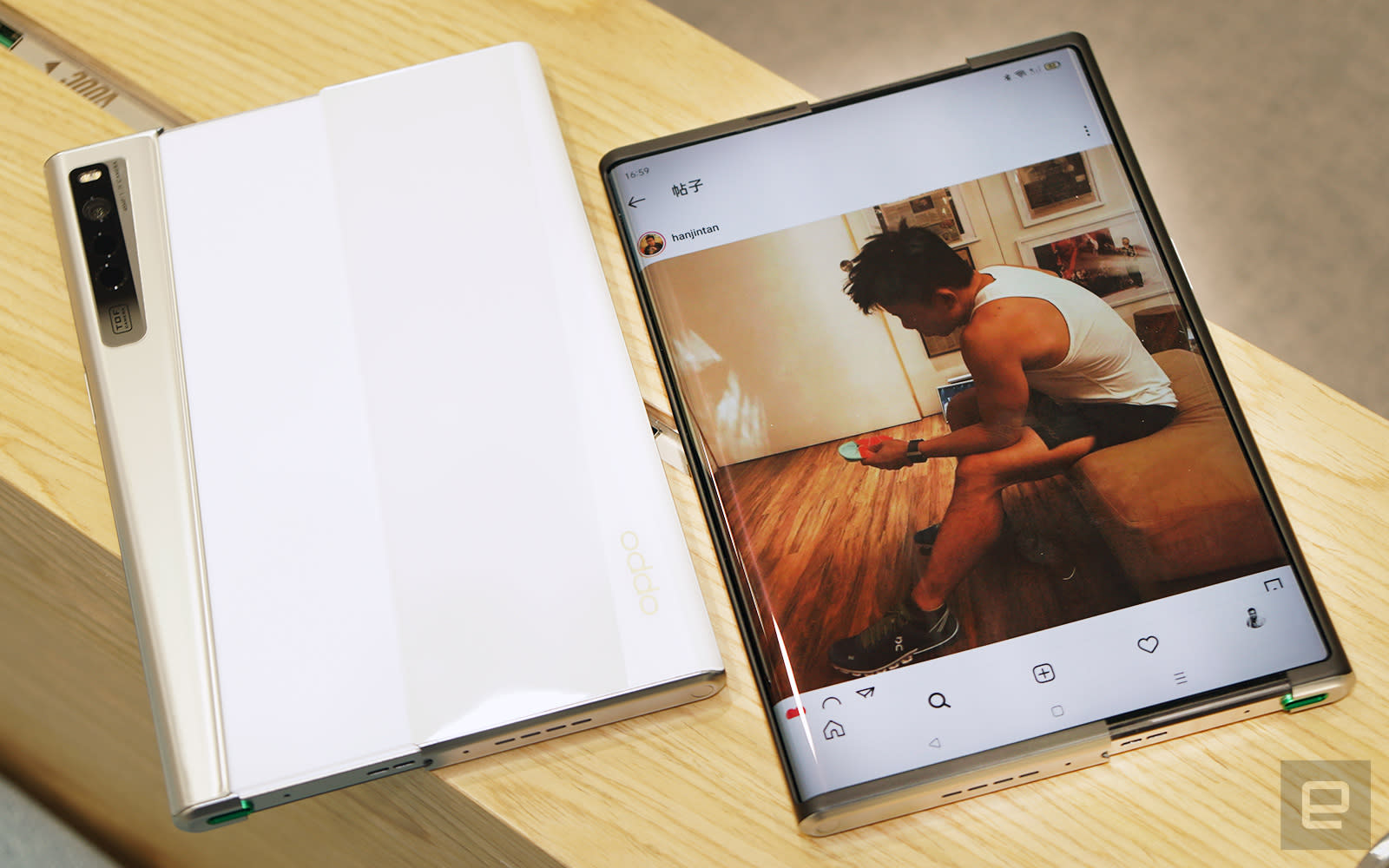 But it has to overcome some hurdles first.

Even though TCL, Oppo and LG have been teasing the rollable phone form factor for some time now, none of them have launched one just yet. The next best thing for now is Oppo's working prototype, three of which arrived in Hong Kong recently, so naturally, we went to take a closer look at this rare device.

The idea of the Oppo X 2021 is to let you switch between a conventional 6.7-inch screen and a mini-tablet-like 7.4-inch screen, with the former offering better portability, and the latter a better experience for videos, reading, gaming and multi-tasking. This is achieved by rolling part of the flexible OLED panel into the back of the phone, which supposedly avoids the creasing issue we've seen on foldables.

The screen rolling is toggled via the power button: a double click or swipe-up extends the screen, and another double click or swipe-down retracts it. This sliding movement is powered by two motors, which push and pull the two halves of the body. The flexible panel is fixed to the right side, before entering a gap on the left and tucked around a roller with a 6.8mm diameter.

As I literally poked around the flexible screen, I was impressed by how tough it felt. This was partly thanks to the "2-in-1 plate" comb-like sliding structure underneath, which provided a rigid structure in both phone mode and tablet mode. In addition, the OLED panel itself is reinforced by a thin caterpillar track laminate consisting of steel parts, which apparently improved the overall strength while still keeping it flexible.

As a concept device, the Oppo X 2021 was surprisingly usable — at least the weight and thickness were within my acceptable range, as both were similar to those of my LG Wing. Within the limited time I had, I got to try Chrome, YouTube and Instagram on the unit (I had to side-load Google Play), all of which were able to dynamically resize in response to the screen movement.

That said, this phone was missing a couple of essential features: volume keys and selfie camera. Chances are Oppo left those out to help speed up development, and it'd most likely add those back before launching the device, if it ever does.

I noticed two small issues on the screen, too. Firstly, when expanded, I could see a light crease along where the panel was usually wrapped around the roller, and this happened to all three prototypes in Hong Kong. Still, those were way more subtle than the creases I've seen on foldable phones.

Another problem was to do with dust. Given that there was a gap on the left to conceal the rest of the flexible panel, it was inevitable that I would occasionally see a line of dust whenever I expanded the phone (and I would have to resist the temptation to wipe it off with my finger). Hopefully Oppo and other manufacturers will find a way to mitigate this issue, though it does seem like dustproofing and waterproofing will be impossible on rollable phones.

Despite the Oppo X 2021's second public appearance last month, the company still doesn't plan on mass-producing it. But as far as proof of concept goes, the rollable phone future is looking promising, save for the small kinks here and there.

Unless TCL can finally show us a working demo, this leaves us with the LG Rollable being the only smartphone in this form factor (for now) to look forward to — sometime in 2021, according to the company's CES announcement. That said, it's uncertain whether LG's mobile business will actually manage to launch this phone, given the many challenges it's facing. Here's hoping we'll hear an update within the next months.