Zuckerberg's latest snub could land him in contempt of Canadian parliament 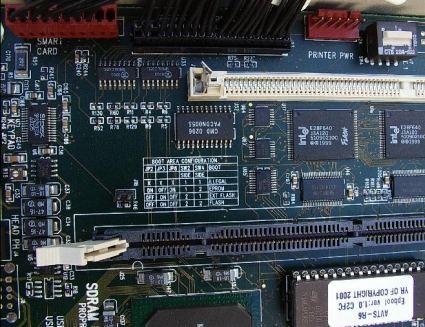 It's no secret that Diebold's electronic voting gear is, um, a little lax in the security department, and now a non-profit group known as the Open Voting Foundation has found "what may be the worst security flaw we have [ever] seen in touch screen voting machines" in the company's older TS model. Apparently these devices -- which produce no paper record of voters' choices -- contain a switch on the internal motherboard (pictured above, with handy onboard instructions) that would allow nefarious hackers to toggle between the two pre-installed boot profiles and "change literally everything regarding how the machine works and counts votes." Even worse, the board also sports a slot for external flash memory from which a third profile could be "field-added in minutes," allowing unsavory characters to overwrite certified files with their own data before switching the machine back to its unaltered state -- with no one the wiser. It looks like Diebold has two options for addressing this nagging problem: either they can open up their machines and source code to a thorough external audit and adopt the resulting suggestions (unlikely), or they can take the simpler route and just get their friends in Washington make it illegal for rabble-rousers like the Open Voting Foundation to play with their toys.

[Via The Register]
In this article: democracy, diebold, e-voting, electronic voting machines, ElectronicVotingMachines, open voting foundation, OpenVotingFoundation, security flaws, SecurityFlaws
All products recommended by Engadget are selected by our editorial team, independent of our parent company. Some of our stories include affiliate links. If you buy something through one of these links, we may earn an affiliate commission.
Share
Tweet
Share