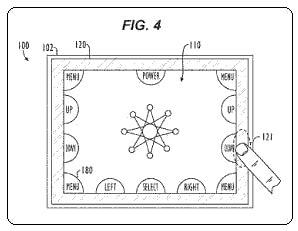 Remember that Apple patent that we eyed back in early September? You know, the one that patented the merging of various electronic devices into a single gadget? Well, it's back and better than ever before -- it's an update to U.S. patent application Serial No. 11/367,749, and is entitled "Multi-Functional Hand-Held Device." So how's this patent different from the last time? It's not, really, but it provides a fair bit more detail written in that cryptic legalistic prose that we've come to know and love; it describes and displays the new interface, which may include various triggers along the edge of the bezel: "By way of example, the visual guides 180 in FIG. 4 include 'Menu,' 'Power,' 'Left,' 'Select,' 'Right,' etc. It will be appreciated that the visual guides 180 and their arrangement depicted in FIG. 4 are only exemplary. More or fewer visual guides 180 may be provided, and the size of the visual guides 180 can be larger or smaller than the scale depicted in FIG. 4." Further, there's a new portrait and landscape option described, handy for viewing photos or watching episodes of "Lost" while on the bus. But even the music-playing core of the iPod will get a makeover, coming in with an on-screen time slider, volume control, and other options that seem to be user-defined and customizable. We've still got questions as we did last time concerning prior art, but perhaps these newer details fill in the gaps. All in all, it would appear that the true video iPod (with possible cell phone or GPS add-ons) is still on the drawing board at this point, and it remains to be seen how these illustrations translate into reality. We've got some more patent diagrams of that portrait/landscape view and of the new "now playing" interface on the flip side, hot off the patent filing presses.

In this article: apple, cellphone, gps, ipod, patent, patent filings, PatentFilings, patents, portable audio, portable video, portableaudio, portablevideo, uspto
All products recommended by Engadget are selected by our editorial team, independent of our parent company. Some of our stories include affiliate links. If you buy something through one of these links, we may earn an affiliate commission.
Share
Tweet
Share