‘GTA: Online’ opens the doors to The Diamond Casino & Resort

You can now gamble while playing 'Frogger'

Hyperspace Beacon: Beating the system in the new SWTOR event 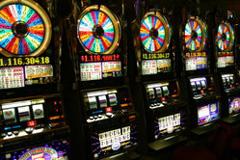 We're fully aware that getting too clever while in a casino is likely to land you behind bars, but a Pennsylvania man is now crying foul after he got the short end of the stick in an unfortunate "mishap." The retired carpenter, who had visited the Philadelphia Park casino before, dropped his two quarters into a Wheel of Fortune slot machine only to win $102,000 -- or so he thought. The machine proudly conveyed his winnings right alongside his actual name, sending his emotions into a jovial whirlwind, but apparently the machine wasn't exactly supposed to, you know, let people hit the jackpot, and now he's fighting just to get his due reward. A spokesperson for the venue stated that it "was just an error in the communication system," but added the mistake seems to have originated in the in-house computing system, not within the machine itself. The man was offered "two tickets to the buffet" (saywha?) and advised to read the disclaimer on the machine, nullifying any awards if the machine malfunctions, but he still feels that this "fault" is illegitimate. So if you're the next person to strike it rich in a questionable casino, try not to get your hopes up too high, alright?

In this article: casino, cheating, error, fortune, gambling, jackpot, lottery, malfunction, mishap, Pennsylvania, slot machine, SlotMachine
All products recommended by Engadget are selected by our editorial team, independent of our parent company. Some of our stories include affiliate links. If you buy something through one of these links, we may earn an affiliate commission.
Share
Tweet
Share