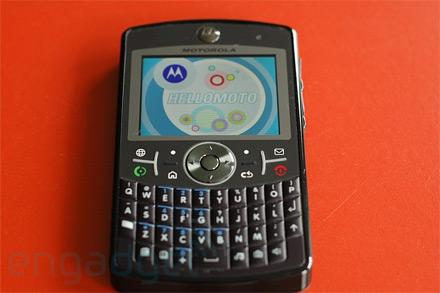 Well lookey lookey, the cellphone fairy dropped us off an unbranded Motorola Q9 to fool around with. Cut to the chase: we're not going to lie: the fact that it's larger than the Q is somewhat unacceptable in our eyes -- we really don't care that it has HSDPA, 3G is no longer an excuse for a big ass phone. Also unfortunate: no more scroll wheel, you're now stuck with the usual up/down rocker buttons. The keyboard, which looks especially tactile, isn't really all that fantastic, and kind of reminded us of a grid of slick, round hard-candies. Basically, we're not super stoked for the Q9, but hey, it ain't over until it's out, and this thing hasn't shown any signs of US release in the near future, so maybe they'll have time to work out some kinks.

Gallery: Hands-on with the Motorola Q9 in the wild | 29 Photos 29
In this article: features, hands-on, motorola, q9
All products recommended by Engadget are selected by our editorial team, independent of our parent company. Some of our stories include affiliate links. If you buy something through one of these links, we may earn an affiliate commission.
Share
Tweet
Share