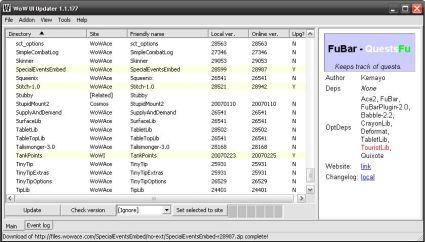 Here's something I've been looking for for a long time! It's not an addon itself, but it does make the management and upkeep of your addons a lot simpler.

Cairnehoof of Dethecus (US) sent this in to Mike, who kindly sent it my way:

I read your article on wowinsider (big fan btw) about the addon issue in the upcoming patch. I have come across an great application for windows that updates your addons from all the popular sites. Maybe you could share it on the site. I know many people would love it. It's alot better than the one offered on ui.worldofwar.net because it not just download from one site. It is maintained on sourceforge.net and does not contain any malicious code. (I scanned with 3 different anti-virus programs and a anti-spyware one) heres the link if you want to take a look: http://sourceforge.net/projects/wuu

So, armed with that information, I set off to explore WUU.

I downloaded the zip file, extracted it to my desktop, so there's a handy WUU folder, and then went inside and blindly ran WUU. I was greeted by a blank screen. I didn't know what to do at first, so for your benefit, I'll direct you to the AddOns menu. It contains everything you'll run on a regular basis. With that knowledge, you can dive right in with these quick instructions:

That's it. Now, it won't work flawlessly. At the end of it, you'll be left with some mods highlighted in light-pink with ?'s in their versions. For me, these mods were mostly sub-mods. For example, Natur's Enemy Cast Bars (NECB) had a bunch of components that weren't found individually on the site. Any mods found in this manner can be handled in a variety of ways, all found in the FAQ for WUU.

I've been running it for a couple of days now, and have to say that I'm impressed. My AddOns are being updated to new versions from the web (especially great for Ace2 mods, which seem to update horuly) and nothing has broken in the process. I know people can be hesitant to install software like this, but I took the leap and I've been satisfied. The version I'm using is directly from WUU's site, and is WUU 1.3.262 beta.

If you'd like to download WUU for yourself, use the Sourceforge link earlier in the article, or go to WUU's home site: http://wuu.vagabonds.info/

Let me know what your experiences are like with the software, and if it's something you'd use on a daily/weekly basis.