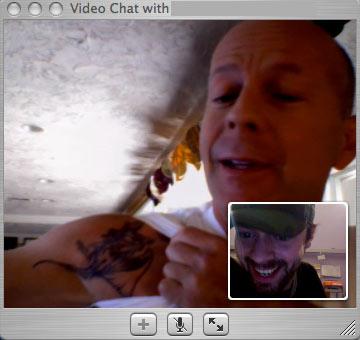 What do you when you've got millions of dollars, no steady day job, and plenty of vocal critics that do their best to berate you knowing full well that they could never do your job if given the chance? We might just ask Bruce Willis that very question, but thankfully for all us, he's already responded. Apparently, Mr. Willis not only finds his way around internet message boards that focus on his films, but he doesn't hesitate to join in on the oftentimes testy conversations and give users his platinum-laced two cents. In a recent go 'round in regard to Die Hard 4, Bruce was caught mouthing off to disbelievers and carpers alike, and while a select few were adamant that this so-called Walter B. was little more than an overzealous fanboy, Bruce did the honorary thing and offered to prove it. The actor actually requested that a fellow iChat / Mac user hit him up for a momentary video chat in order to show his face, and sure enough, the most vocal doubter was indeed put in place rather quickly. Big fan of the ego, Bruce.

[Via Switched]
In this article: apple, bruce willis, BruceWillis, chat, forum, ichat, isight, mac, movie, software, star, superstar, talkback, talking, webcam
All products recommended by Engadget are selected by our editorial team, independent of our parent company. Some of our stories include affiliate links. If you buy something through one of these links, we may earn an affiliate commission.
Share
Tweet
Share