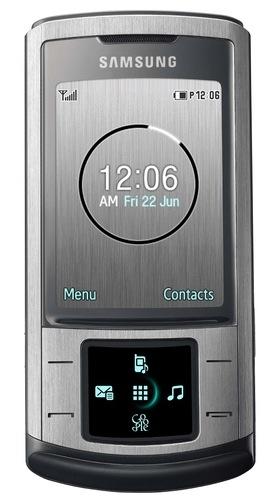 Samsung just announced their new flagship "Soul" cellphone in the spirit of its Ultra Editions. Get it? Spirit Of ULtra, soul? Yeah. Anyway, as Sammy's go-to phone for 2008, we're looking at a quad-band GSM phone with 7.2Mbps HSDPA; 2.2-inch QVGA display; 5 megapixel, image stabilized camera with Power LED flash and face detection; FM radio; microSD; Bluetooth, and more in a 12.9-mm thin slider. Sweetening the deal is a Magical Touch interface which adapts to your usage (music, camera, etc) a la LG's Venus. They've even added a jumbled-up Google icon for search and gMail access. Look for it to hit European retail in April. On display next week at Barcelona's Mobile World Congress where you can bet your last money, it's gonna be stone gas, honey.

2
In this article: breaking news, BreakingNews, samsung, slider, soul, u900, ultra edition, UltraEdition
All products recommended by Engadget are selected by our editorial team, independent of our parent company. Some of our stories include affiliate links. If you buy something through one of these links, we may earn an affiliate commission.
Share
Tweet
Share