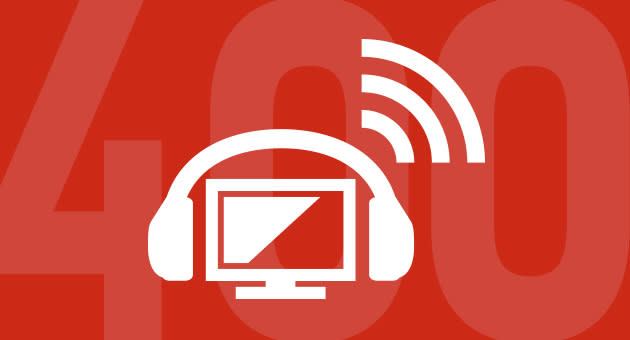 Welcome to the 400th HD Podcast! Similar words were typed back in February 2006, when the fledgling HDBeat Podcast was launched, with a slightly younger Ben Drawbaugh at the helm. Richard is no slouch himself, having racked up over 200 episodes in the series, and we're also joined by former editor and HD host Steve Kim, who has a habit of dropping in on these occasions. The crew does some reminiscing, but won't be stopped from getting down to the details that have kept this show afloat for so long. There's discussion of Cox's gigabit internet rollout, Google Fiber's business plan and Amazon's Fire TV deal, which Steve is pressured into acknowledging as a must-have deal. Richard has some tips to keep your classic Xbox 360 in top shape, but it somehow manages to dredge up memories of the unending flow of quarters which Donkey Kong and its arcade brethren used to command. Please join us for this quadricentennial celebration of the Engadget HD Podcast and its nostalgic look at how far things have come since this all began.

In this article: engadget hd podcast, episode 400, hd podcast, hdpostcross, hdpostmini, minipost, podcast, podcasts
All products recommended by Engadget are selected by our editorial team, independent of our parent company. Some of our stories include affiliate links. If you buy something through one of these links, we may earn an affiliate commission.