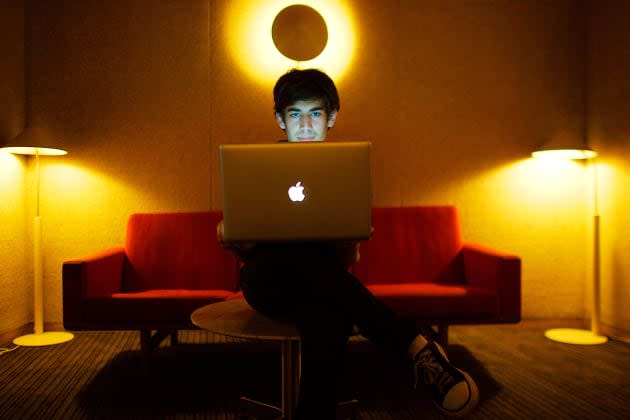 In 2000 Aaron Swartz was just a terrifyingly smart 14 year-old. He was a faceless name on a mailing list, quietly contributing code and copy to RSS 1.0. Roughly twelve years later, in January of 2013, he became an unfortunate casualty in an ongoing battle that pits the government and its business allies against a growing army of online activists.

Brian Knappenberger didn't know Aaron Swartz personally, but the documentarian was familiar with his story. He previously directed We are Legion, a film about Anonymous and its hacktivist associates, so he had strong ties with the community that happened to be some of Swartz' biggest supporters. After Aaron committed suicide in his Brooklyn apartment, Knappenberger began collecting reactions to the loss from friends, family and other members of the activist community. Soon he realized that he had to make a film about it, and the result is The Internet's Own Boy which hits select theaters, Google Play, iTunes and Vimeo on June 27th. The director stopped by the AOL offices last week to discuss his film and the young man at the center of it.

The truth of the matter is that Aaron Swartz didn't generate nearly as much press as he deserved while he was alive. For years he fought what he saw as an archaic and unfair system in PACER and JSTOR, repositories for court documents and academic papers. They were cumbersome, overpriced and effectively inaccessible to the general public (unless you're willing to pay an exorbitant amount of money). JSTOR decided against pressing charges, but it was ultimately those battles that put Swartz on the radar of law enforcement.

Swartz deserves plenty of credit for what he accomplished as a developer and pioneer of the modern web. (In addition to helping develop RSS, he worked on the Creative Commons license, the simplified text formatting language Markdown, and was an early partner at Reddit.) But it's his reaction in the face of serious legal trouble that demonstrates why his story has resonated with so many people. Aaron was facing up to 35 years in jail and a fine of $1 million for downloading massive quantities of academic papers. Rather than accept a plea bargain that would require him to admit guilt, however, he stuck to his principles and continued to challenge what he saw as an unjust law. And, while facing a seemingly heavy-handed sentence, he became one of the most outspoken critics of PIPA and SOPA.

The Internet's Own Boy tells the story of Aaron Swartz's life but, as the director reveals in our interview above, the movie is really about his effect on other people. What made Aaron special wasn't his coding skills or silicon valley riches; it was the unwavering dedication to his principles, his friends and his tireless struggle against injustice.

In this article: Aaron Swartz, brian knappenberger, interview, pipa, reddit, sopa, the internets own boy, video
All products recommended by Engadget are selected by our editorial team, independent of our parent company. Some of our stories include affiliate links. If you buy something through one of these links, we may earn an affiliate commission.