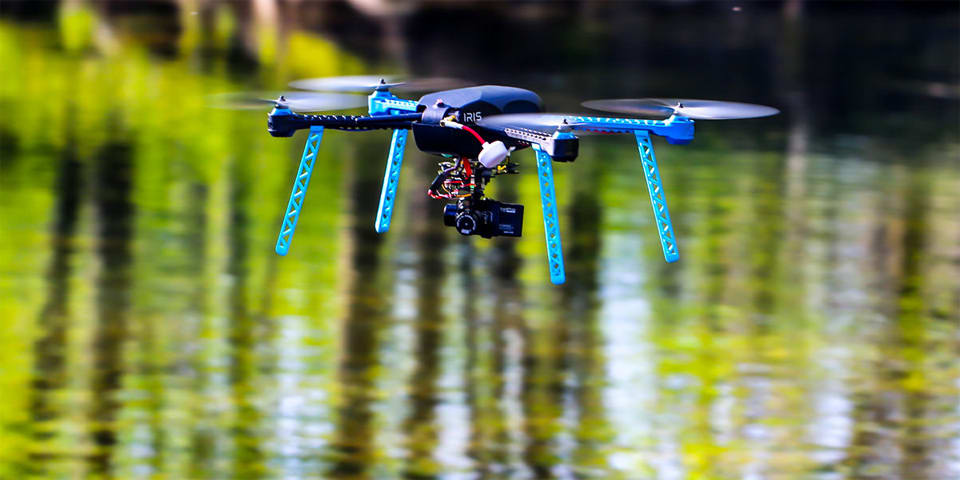 Everyone, it seems, is talking about drones these days. Whether it's for industry, research or performance art, the skies have never been busier. Thanks, in no small part, to the ever-increasing number of consumer-friendly, ready-to-fly quadcopters. Colin Guinn left DJI to join one of the biggest names in commercial drones -- 3D Robotics -- as SVP of sales and marketing. If anyone knows about the future of our skies, it's him. I'll be speaking with Guinn at Expand on Saturday, November 8th, about the future of commercial, personal and hobby drones -- with maybe a little onstage flying going on, too. Before that though, read on to get a little primer on the buzzing topic from the man himself.

Tell us a bit about 3D Robotics, and some of its key achievements in the drone space.

We're North America's largest consumer drone manufacturer, known for pioneering advanced and easy-to-use UAV technology, and for the Pixhawk, the world's most popular autopilot platform. We introduced the world to 3PV Follow Me technology, which automatically keeps the camera on you as you move so that you stay in the center of your videos. Because all 3DR software is free and open source, designed and supported by the world's first and largest open community of drone developers, our platforms and features have been adopted by UAV companies the world over. Our platforms also serve as robust tools for data analysis, enabling mapping, surveying, 3D modeling and more, and are currently used across multiple industries around the world, including agriculture, construction, infrastructure, search and rescue and ecological study.

Why do you think drones have become so popular with mainstream consumers in the last few years?

A lot of forces have come together. First, the technology has not only gotten better and better, but just like with computers, it's also become much cheaper and easier to use. For instance, in terms of technology, all 3DR platforms are fully autonomous drones, which means you don't even need to fly them yourself if you don't want: Just draw a flight path on a tablet, and the drone goes where you tell it to. But "cheap plus easy" isn't by itself a formula for success; the technology is also incredibly useful. Now anyone can easily and reliably capture amazing aerial photos and videos with a GoPro, seeing themselves and their world in a way that will alter their whole perspective. Also, and probably most importantly, 3DR has been committed to changing the public's perception of drones, which is really instrumental: More and more now, people are recognizing that drones are really vehicles for good. They can help us live more sustainably, see our world in a new way, grow more and better food, work smarter and more efficiently, protect species and resources, save lives. It goes on.

What are the most interesting/exciting things you've seen people using drones for (be it commercial or otherwise), and how do you see them being employed in the near-future?

Photographers and filmmakers can show us ourselves and our world like we've never seen it before. Farmers and architects and engineers can target their action more effectively based on incredibly accurate and reliable empirical information, obtained whenever they want it. Ecologists and activists use drones to help do things like save rhinos and elephants from poachers and curb deforestation. Drones are invaluable to public servants like firefighters, S&R [search and rescue] and other first responders. The most exciting thing, really, is everything that the 7 billion people on this planet will figure out to do with the technology and platforms we're building today. It's like the dawn of the personal computer. If this industry were compressed into a day, we'd just be sitting down to breakfast.

Some people still worry they are dangerous, or that more drones in the air will lead to more injuries and accidents, etc. A. What do you say to those people? And B. What can we all do to prevent that (owners, legislators and manufacturers)?

We're obviously concerned about these very same issues, and are testing the technology that will prevent them. For instance, NASA is actually actively working on an air traffic control system for drones, which would have them automatically respond to geofenced areas -- not only stationary buildings, but also around a moving plane or helicopter or other drones. Crashes will be rare, but preventable scenarios that we're working with government entities to mitigate. The technology exists to solve these problems and is actively being implemented; it is not just an idea. However, it's crucial that the FAA gets regulation in place soon, so companies and other entities can continue to innovate and develop solutions to these pressing problems -- dragging our feet on regulation will only compound these issues by trammeling our technology.

Case in point about technology: Our autopilot, unlike any other on the market, can write down all the information that happens on every flight and save it to the cloud. This is critically important because having access to this data will actively help us become a better company in cases that we may have otherwise never tested ourselves. This is new technology that users are pushing the boundaries of every day, and we have the support and development infrastructure in place to not just resolve specific scenarios, but to help our industry improve as a whole. We'd definitely like to see other manufacturers follow our lead here.

What are some of the emerging technologies/features that we can expect to see become a reality in consumer drones in the next 12 to 24 months?

We'll see more intuitive and engaging user interfaces and hardware design, and simpler workflows. Sharing will also be huge, which means higher-quality photo and video and more powerful WiFi control and downlink. 3DR will continue to raise the bar for Follow Me technology, and we'll see huge advancements in sense-and-avoid and optical-flow tech. We've also partnered with entities like Intel to develop companion computers for our systems, which is just mind-blowing -- I mean, imagine if your computer could fly! These next couple of years are going to be very, very exciting.

In this article: 3d robotics, colin guinn, drone, drones, expand, expand2014, ExpandNY, FiveQuestions, interview, multicopter, quadcopter, UAV
All products recommended by Engadget are selected by our editorial team, independent of our parent company. Some of our stories include affiliate links. If you buy something through one of these links, we may earn an affiliate commission.