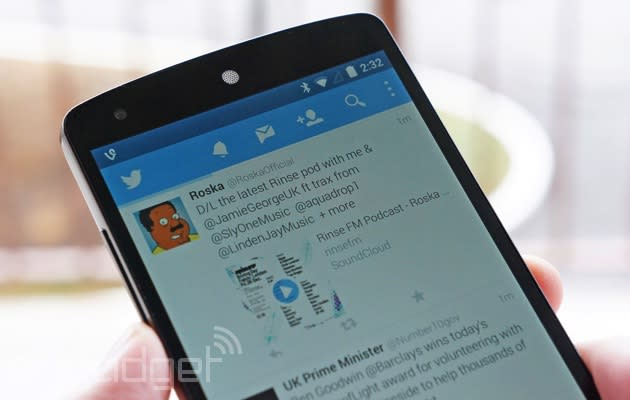 Twitter is determined to put its frameworks into as many of your apps as it can, and it's going to great lengths (in some cases, literally) to make sure that happens. The social network has unveiled Flock, a worldwide tour that will show developers how to put tweets into their apps through Twitter's Fabric programming kits. The campaign will start in Los Angeles on January 21st, but it'll eventually spread to other US cities and major international hubs like Bangalore, London, São Paulo and Tokyo. If you're curious enough to attend, you'll get to talk to Twitter engineers and developer evangelists that might just solve your problems with everything from ads to Digits sign-ins.

The company is sweetening the pot with some cash, too. It's launching Hatch, a contest that gives startups prizes for clever uses of Fabric in their apps. The winner gets $25,000 (and gobs of publicity, no doubt), while runners-up receive everything from ad credits to a one-on-one chat with a Twitter executive. You'll find out about the finalists on June 22nd, and the winner in July.

It's hard to say how well these strategies will work. They may well persuade would-be partners who are skittish about Fabric and otherwise wouldn't give it a try. However, they don't address some of the longstanding complaints about Twitter's attitude toward developers, such as the existence of user caps for third-party clients that hurt their ability to compete with official apps. Hatch and Flock are likely to boost Twitter's sagging bottom line, but the firm may need to do more to convince some developers that it isn't putting artificial limits on their success.

In this article: api, app, apps, developer, digits, fabric, flock, hatch, internet, sdk, socialnetwork, socialnetworking, twitter
All products recommended by Engadget are selected by our editorial team, independent of our parent company. Some of our stories include affiliate links. If you buy something through one of these links, we may earn an affiliate commission.