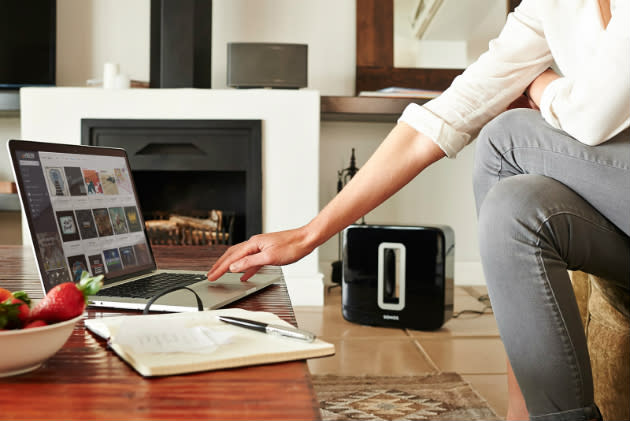 It's become increasingly difficult for music streaming services to differentiate from one another. They all offer huge music libraries, mobile apps and the ability to store specific tracks, albums and playlists offline. Aside from dropping their subscription prices, how can a company like Deezer persuade people to switch? With podcasts, it hopes. That's right, the company is now pitching its service as a home for all of your favortie audio. So whether you're catching up on Serial or looking for some tunes to keep you company on the bus, there's only one app you should have to keep on your home screen now.

Deezer's new podcast integration is being powered by Stitcher, the popular podcast and internet radio service it acquired last October. Stitcher's standalone apps aren't going anywhere, but the team-up means listeners in the UK, France and Sweden will have instant access to over 20,000 shows spanning news, entertainment and sport. The feature will reach other countries in the coming months, but it's no surprise that Deezer is starting with its strongest markets first. After all, it faces fierce competition from Spotify, which is also thought to be integrating podcasts into its service, and a new offering from Apple.

Deezer isn't a big name in the US, at least not yet. The company has found success in other territories, and seems more interested in targeting new, emerging markets where other services are yet to make inroads. If it's going to mount a serious assault on Spotify, Rdio and the rest of the gang in the US, however, it's going to need something unique to set itself apart from the competition. It's already tinkered with high-quality "Elite" audio, although at the moment it's limited to Sonos hardware. Jay-Z's Tidal is staking a claim in this space, and unless Deezer expands the service, it'll always be a niche proposition.

Podcast popularity is certainly on the rise, but here's the problem: there are tons of free, high-quality podcast management apps. Deezer needs to prove that its integration with Stitcher is significant, so that users feel like their paid subscriptions are now more valuable. Simply fusing your favorite shows with Deezer's music library probably isn't going to cut it. Still, the possibilities are intriguing -- if Deezer knows that you listen to 6 Music's Lauren Laverne as a podcast, it could automatically build playlists based on the tracks that were selected in each show. Likewise, the company could use your listening history to recommend new podcasts. That alone would take this new feature beyond a mere novelty.

In this article: deezer, france, music streaming, Podcasts, stitcher, streaming, sweden, uk, video
All products recommended by Engadget are selected by our editorial team, independent of our parent company. Some of our stories include affiliate links. If you buy something through one of these links, we may earn an affiliate commission.