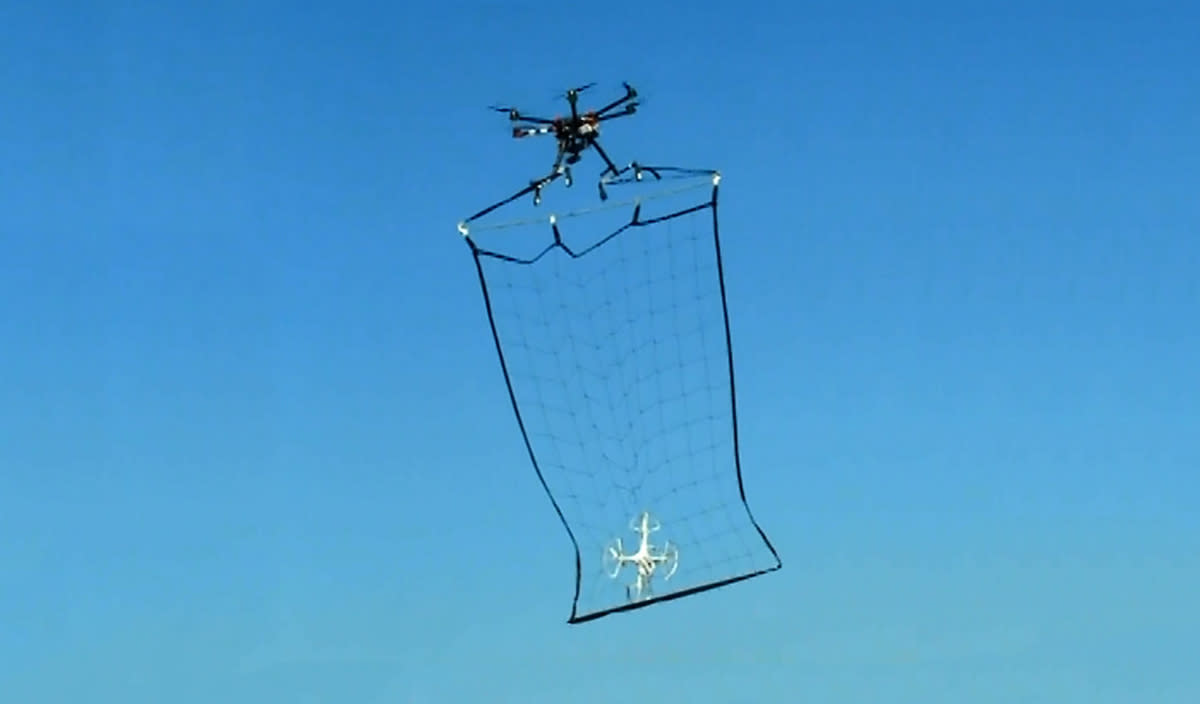 Law enforcement agencies the world over are worried about the power of drones, and how nefarious types could use them for evil. Tokyo has decided that there's only one thing to be done about the problem, which is to form an anti-drone squad that'll apprehend rogue fliers in the air. Rather than using a dragnet on the ground, the anti-drone drone will use an actual net* to scoop up suspects and carry them away to safety. That may sound like it's being done for the LOLs, but it's deadly serious -- officers found a drone carrying radioactive material on the roof of the country's prime minister back in April.

If our eyes are to be believed, it looks as if the police are using a DJI Spreading Wings 900 with a large 3 x 2 meter square of net tied to its feet. When a rogue drone is spotted in the air, the police unit will fly overhead, scooping up the smaller craft and dragging it away to safety. It's an elegant solution, and one that'll be tested by a single drone this month, with a full fleet of 10 guarding significant government buildings going into operation next February.

It's not the first country to look into dealing with the potential threats that UAVs pose since they can get about pretty much anywhere. Earlier this year, France launched its own anti-drone drone that chases down and triangulates the identity and location of the pilot, directing law enforcement officers straight to 'em. Man, just when there's a whole host of desirable drones hitting the market, the feds start building ways to snatch 'em away from you.

*Wait, a net in the sky is called a... SkyNet, right? Viene Tormenta!

In this article: AntiDrone, culture, Drone, gadgetry, gadgets, gear, Japan, robots, transportation, video
All products recommended by Engadget are selected by our editorial team, independent of our parent company. Some of our stories include affiliate links. If you buy something through one of these links, we may earn an affiliate commission.