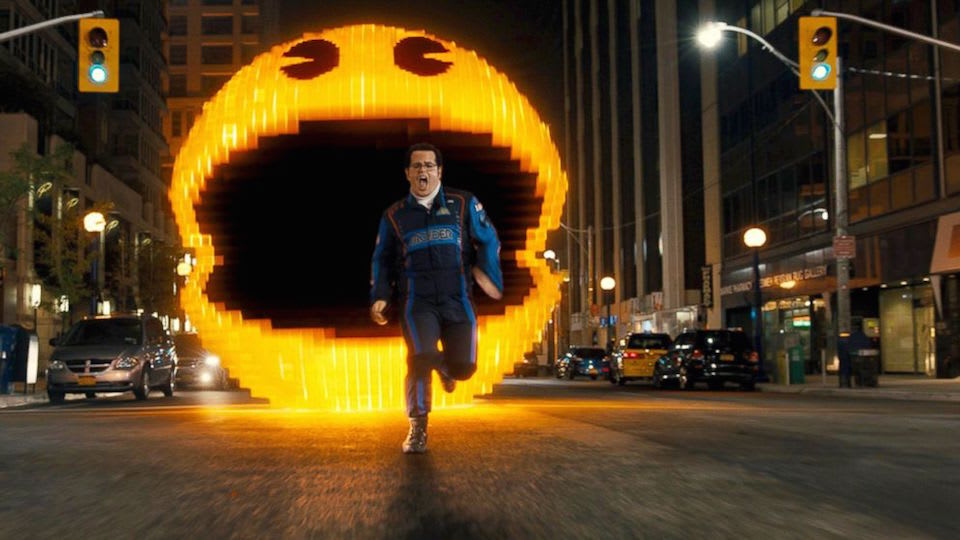 When the first trailer for Pixels hit I was worried that the movie was going to be a "steaming pile of cinematic garbage." Now that I've actually seen the Adam Sandler and Kevin James vehicle, I can say that was still far too generous a prediction; it's actually much, much worse. Pixels' real villains aren't the admittedly gorgeous renderings of giant-sized Pac-Man and Donkey Kong hell-bent on destroying Earth -- they're the toxic tropes that Hollywood keeps perpetuating.

The number of negative stereotypes Sandler and his cronies fit into the movie's 105-minute runtime would be impressive if they weren't so damaging. First up we have Sandler's character Sam Brenner. He's a self-described "loser who's just good at old video games" -- who works as an A/V installer after being beaten at the 1982 Worldwide Video Arcade Championships as a kid. Then there's the grandma's-basement-dwelling, socially awkward man-child, Ludlow Lamonsoff (Josh Gad). Oh, and Peter Dinklage's Eddie Plant rocks a mullet, talks like the Kool-Aid Man ("Oh yeah!") and asks for a threesome with Martha Stewart and Serena Williams in the White House's Lincoln Bedroom in exchange for helping save the world.

If none of that sounds bad enough, rest assured that it gets worse. One lazy joke involves the president of the United States (Kevin James) visiting the United Kingdom's prime minister and not being able to decipher her Britishisms. They're English words, but they aren't! Ignorance is funny! Get it?! At almost every turn, women are condescended to or ignored, especially Michelle Monaghan's DARPA scientist Violet van Patten. What do they know about end-of-the-world scenarios or classic arcade games anyway, am I right, boys?

And despite Brenner treating van Patten like crap for half the movie because she rebuffed him when he tried taking advantage of her vulnerability, she falls for him at the end anyway. See, even if you totally insult a lady repeatedly, it doesn't matter so long as you're good at video games. Brenner also twice reminds us that he's an amazing kisser (as all nerds are) because he appreciates it more. Sure.

This is an Adam Sandler movie so of course not even Q-bert is safe from being reduced to the butt of an excrement joke.

Oh, and how do we know that Ludlow really plays video games? He's a chubby virgin who's lusting after a pixel vixen, wears a T-shirt with an 8-bit Mario on it, spends time on 4chan and spouts crackpot conspiracy theories at every turn. He also takes a lot of pleasure slapping troops on the ass and calling them "little girl maggots" at one point.

Amid the insipid dialog and boring action sequences -- a real-life game of Centipede set unironically to "Workin' for the Weekend" is an early offender -- there's a lone bright spot. It's roughly three feet tall, stands on two legs, is orange and has a trumpet's bell for a mouth. Of course, I'm talking about Q-bert. For every game that the humans beat the aliens at, they get a trophy. One is the dog from Duck Hunt; the other is our orange pal.

Q-bert is adorable. When Brenner takes some downtime between missions and checks out The Last of Us: Remastered, he's shocked by how violent it is. The camera cuts to Q-bert trembling and distressed watching the Sony TV screen (it's a Sony movie, hence the free product placement). It's okay, though, because a few minutes later the creature's bouncing and laughing on a trampoline. In another scene, it's wearing a tuxedo and ohmygosh it's the cutest thing ever. 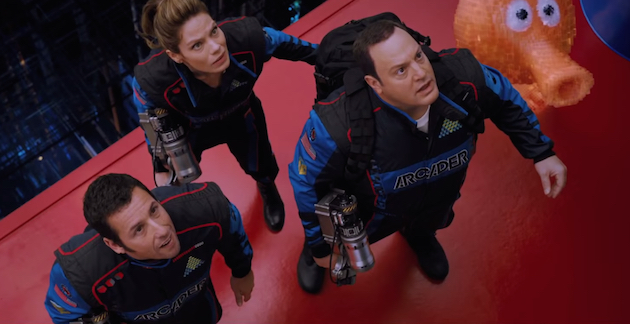 The humans and Q-bert, moments before the alien soils itself.

But this is an Adam Sandler movie so of course not even Q-bert is safe from being reduced to the butt of an excrement joke. And just when I thought the filmmakers couldn't degrade the little bugger any further, 'Bert sacrifices itself to become a trophy of a different kind. When the humans defeat the aliens once and for all (spoiler alert), the pixelated Paperboy, Frogger and other attackers wreaking havoc on the streets of Washington, DC, start disappearing. Even the buxom blonde -- the one Ludlow has a multi-decade crush on; who inexplicably turns from pixel to flesh mid-battle and starts fighting alongside the humans -- fades away.

A tearful Ludlow asks why Q-bert gets to stay and not Lady Lisa. "Q-bert is a trophy," van Patten says. "We get to keep trophies." That's when the little orange alien turns itself into the platinum-coiffed object of Ludlow's affection. His dream girl is now a trophy he owns forever. Seriously. The epilogue is a shot of a crib full of little Q-berts. I couldn't make this shit up if I tried.

Pixels is in an abusive relationship with its audience from the word "go."

And that's the problem here: Pixels is in an abusive relationship with its audience from the word "go." There are jokes made at the expense of modern games in an effort to win over the fans who grew up in the arcades. At the same time, classic songs familiar with that same group, like Tears for Fears' "Everybody Wants to Rule the World," are destroyed so Ludlow's character can sing a horrific karaoke set that ends with him drunkenly humping the floor and crying. Practically every negative stereotype about video-game fans is repeated ad nauseam for more than 90 minutes.

Unlike Disney's cute Wreck-It Ralph, Pixels isn't using nostalgia in an attempt to charm its audience and tell a heartwarming story. No, Pixels is holding a distorted mirror up to the crowd and laughing at them instead of with them. This is what Hollywood thinks geeks are.
In this article: adamsandler, donkeykong, gaming, hdpostcross, joshgad, kevinjames, michellemonaghan, moviereview, MovieReviews, pacman, peterdinklage, pixels, review, sony, uk-feature
All products recommended by Engadget are selected by our editorial team, independent of our parent company. Some of our stories include affiliate links. If you buy something through one of these links, we may earn an affiliate commission.