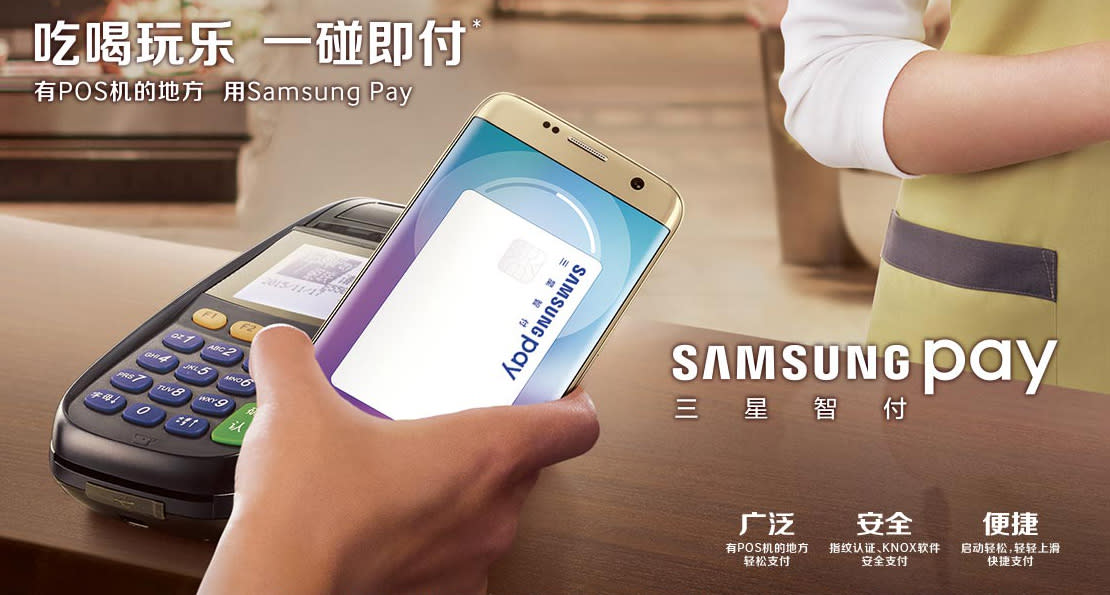 With Apple already expecting China to be its biggest mobile payment market, it's no surprise that its biggest direct competitor, Samsung, also wants a slice of this piping hot pie. After a one-month public beta, today the Korean giant is officially launching its Samsung Pay service in China in partnership with UnionPay -- inevitably the same bankcard company that helped launch Apple Pay locally. In other words, only UnionPay credit and debit cards -- up to 10 of them per device -- can be associated with local Samsung phones for the time being.

The first wave of participating institutions include China's largest bank, ICBC, along with China Construction Bank, China Merchants Bank and several more; other major ones such as Bank Of China and Bank Of Communications will follow later. As for devices, only the Galaxy S7, Galaxy S7 Edge, Galaxy S6 Edge+ and Galaxy Note5 are supported for now, but Samsung hinted at the possibility of adding more phones with fingerprint readers later, which will hopefully include the Galaxy S6, Galaxy S6 Edge, A5, A7 and A9 that were also tested in the public beta. It goes without saying that rooted devices won't support Samsung Pay.

Samsung's attempt to break into the well-established mobile wallet market in China will sure be a challenge. Local services such as Alipay and WeChat already cover online shopping, taxi services and even features as ridiculous as giving each other virtual "red pockets" (especially during Chinese New Year). More recently, these can be used at brick-and-mortar stores as well.

According to the latest local payment ecosystem report from the Chinese government, in Q3 2015 alone the nation made 4.54 billion mobile payment transactions, which involved a staggering total of 18.17 trillion yuan or about $2.8 trillion -- a 253.69 percent growth year on year. It's no wonder that Apple and Samsung want in on this so badly (Android Pay probably won't even have a chance given China's general hostility towards Google services), but it'll be interesting to see whether they can change the habit of local users at all.

In this article: china, gear, mobile, mobilepayment, mobilewallet, payment, samsung, samsungpay, services, unionpay, wallet
All products recommended by Engadget are selected by our editorial team, independent of our parent company. Some of our stories include affiliate links. If you buy something through one of these links, we may earn an affiliate commission.