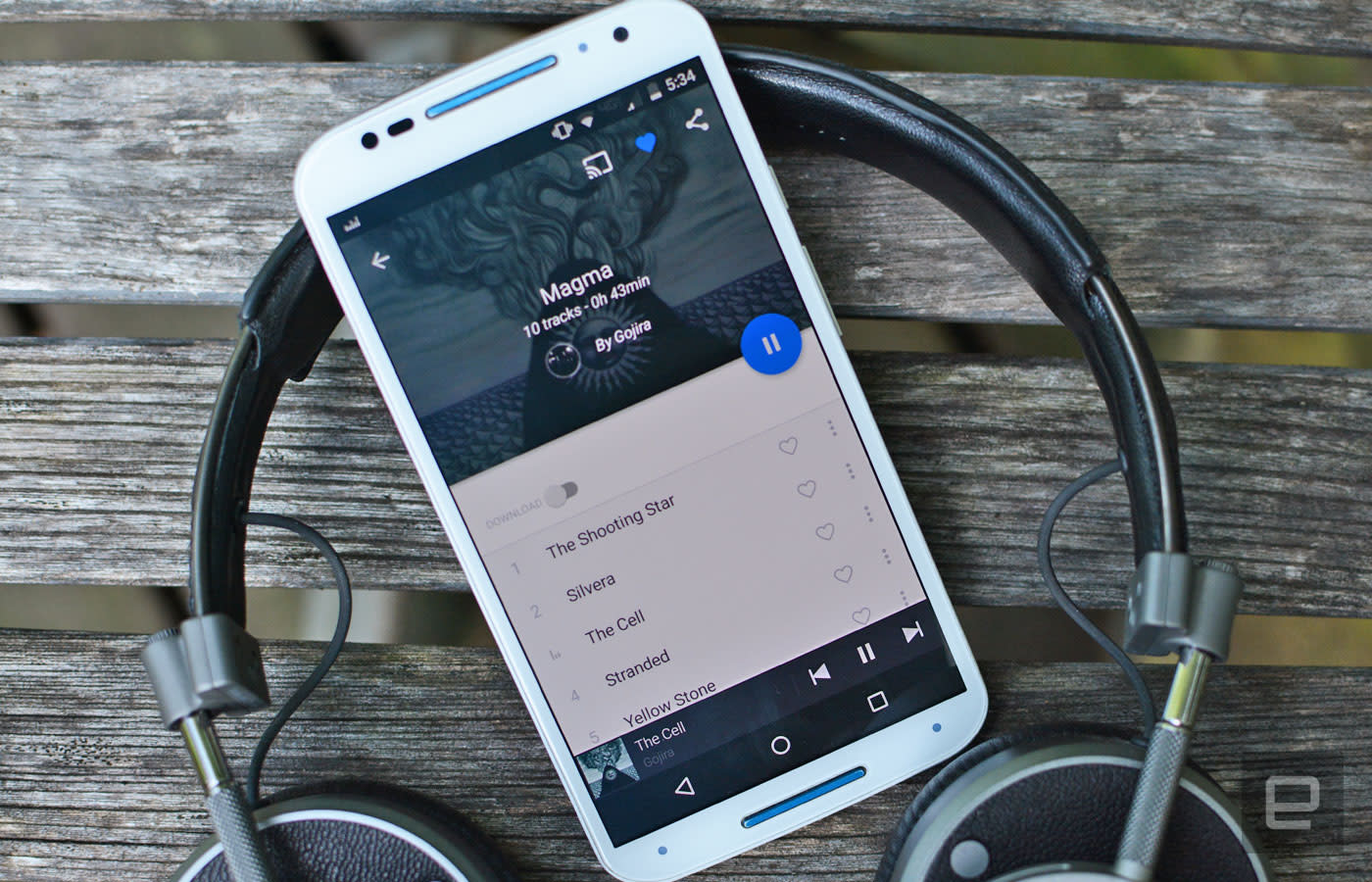 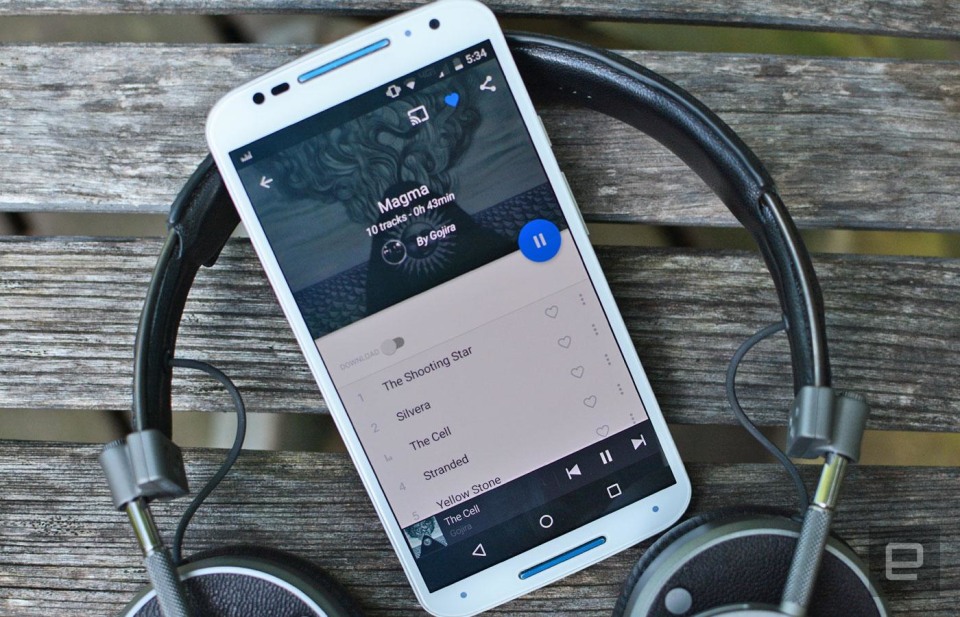 People outside of the U.S. are already familiar with Deezer. The streaming service has been available in other parts of the world for a long time now, but until recently the company only made its subscription available to a select few in the States. Until a few weeks ago, you needed to own either Bose or Sonos speakers (or have a Cricket phone plan) to have the option of using Deezer. After dipping its toe in the U.S. market, the streaming catalog is now available to everyone. Does it offer enough to woo subscribers away from other big-name services? Probably not. First, a few details about my streaming habit. I'm a Spotify user familiar with Apple Music, thanks both to that three-month trial and the fact that my wife uses the service. I've been using Spotify since 2010, mostly for a la carte streaming, storing playlists and the radio feature. Despite the addition of video and podcasts, I use PocketCasts for my episodic content because the app has all of the shows I listen to regularly. Spotify does not, and as I came to find out, neither does Deezer.

I'm getting a bit of ahead of myself with podcasts, though, so let's step back to the main reason you use a streaming service: music. My first order of business was to see if I could find gaps in Deezer's library. Out of over two dozen albums that I currently have saved for easy access in Spotify, only two were missing here: Emarosa's latest album, 131, and Thrice's debut, Identity Crisis. I tried a number of other artists as well, including some that I felt were more obscure. During my searches, I was able find nearly everything I was after. Save for those two albums, I didn't notice any huge holes in the catalog during my three weeks with Deezer. Not too shabby. Music that's exclusive to Tidal and other services isn't in Deezer's library, but that goes without saying. If you're looking for an exact number, Deezer touts a library of 35 million songs. That's 5 million more than both Spotify and Apple Music and 10 million more than Tidal's collection. Speaking of Tidal, Deezer offers a similar high-resolution streaming option for $20 a month. There's one catch: You have to own Sonos speakers in order to stream Deezer Elite's lossless FLAC songs. That really limits the number of people for whom that option will make sense.

Once you find the music you're looking for, Deezer makes it easy to save albums and tracks for later. Like Spotify and others, the service has a Favorites section for any song, album or podcast that you "heart" or "star" in the app. In other words, with one click, you can save an entire album to listen to later. Sure, it's not technically a playlist, but you can still easily get to it from your profile. Deezer's Favorites is the equivalent to Spotify's Your Music section, which keeps any saved songs and albums separate from your playlists. This is just one example of how most of the core features in Spotify and other services are available as part of Deezer's streaming plan, too. That includes apps for mobile, desktop and the web alongside AirPlay for iOS and Mac and Google Cast for the Android app. I'm happy to report that Deezer offers an artist-based radio feature similar to the one I already love in Spotify. While it's called "Radio" in most services, Deezer dubbed the tool "Artist Mix," which I only figured out after I started clicking around. As with other streaming apps, you're free to like or dislike songs to improve its selection in the future. You can also easily add any songs you enjoy to an existing playlist.

As of late, Spotify and Apple Music have both been touting music discovery features as a means of attracting new users. Since its launch, Apple Music has had a "For You" section that offers suggestions based on listening habits, but included in the soon-to-be-released iOS 10 update is a "Discover Mix" that's more akin to Spotify's "Discover Weekly" for finding new music. As a Spotify user, I get a lot of use out of "Discover Weekly" and the recently announced "Release Radar" to keep my rotation fresh. Both of those tools are super handy and consistently offer solid picks, so it's nice to see Deezer serving up recommendations as well.

Deezer's recently redesigned home page is the first screen you'll see when you fire up the app or visit the web portal. That entire page is one big library of genre channels, curated playlists and easy access to a feature called "Flow." Although Flow does a decent job creating a mix of songs based on your listening habits, I found the music selections to be somewhat dated. With "Discover Weekly," Spotify serves up recently released songs as part of its suggestions, and I actually prefer that to a collection of older tunes. Deezer's curated playlists are much better than "Flow" in my opinion, as some are dedicated to genre-specific new releases while others I liked focus on specific artists' greatest hits.

Alright, so far Deezer is stacking up nicely against Spotify and Apple Music. Is there anything that the service doesn't do particularly well? Yes: podcasts. Deezer added podcasts last year, several months after it bought Stitcher. The company then sold Stitcher and its 8.5 million users to Scripps back in June. I can't speak to what podcasts were like on Deezer before, but as it stands, the integration makes the app frustrating to use. No Terry Gross for me.

First, the selection is limited. I listen to five or six podcasts on a regular basis and none of them come up in a search on Deezer. I found that pretty odd since they're available inside the Stitcher app and since Stitcher is still being used to pipe podcasts into Deezer. On top of not having a great catalog, the podcasts themselves are difficult to find. The only way the episodic content shows up in a menu is if you're actually able to find one via search and favorite it. Otherwise, you're left to those discovery channels to find podcasts, and even then there are but two options: News & Politics and Comedy. Perhaps the best illustration of my frustration is that a search for "sports" in Deezer turned up exactly zero podcast results.

I began test-driving Deezer ready to be persuaded that maybe Spotify wasn't the best option for me. Instead, I found that I'm actually quite fond of my current streaming service's discovery tools, and unlike a lot of folks, I actually prefer Spotify's user interface. Sure, Spotify's podcast library isn't the best, but it's at least easier to find and it offers a solid lineup of shows. More than anything else, I was hoping Deezer might allow me to stop using a second app just for podcasts. Unfortunately, that wasn't the case. It also seems silly that you have to own a certain brand of speakers in order to pay more for high-res streaming. I wonder how many folks would opt for that pricier tier, even if they were able to do so.

Aside from my complaints about podcasts, Deezer is a serviceable option for streaming music. Since most of the alternatives offer a similar feature set, it really comes down to a matter of personal preference for the user interface or brand loyalty. If you're a devoted user of Spotify, Apple Music or Tidal, Deezer doesn't offer enough for people to jump ship. However, if you've yet to commit to a service, don't take my work for it. All of these music streaming services offer a free trial before you have to pay up, so you might as well exhaust all of the options before deciding.

In this article: audio, av, deezer, entertainment, music, musicstreaming, review, services, streaming, subscription
All products recommended by Engadget are selected by our editorial team, independent of our parent company. Some of our stories include affiliate links. If you buy something through one of these links, we may earn an affiliate commission.