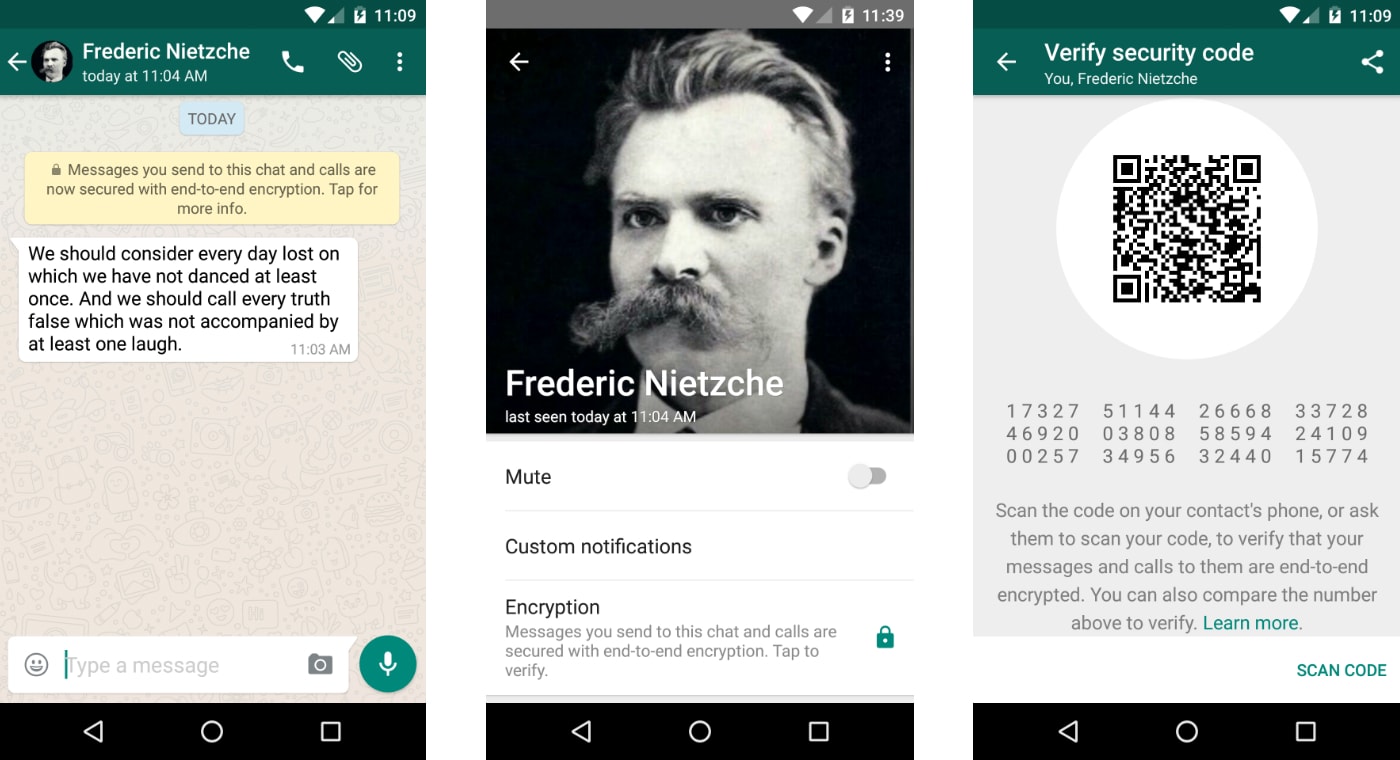 Surprise! WhatsApp, one of the most popular online communication services in the world, now uses end-to-end encryption on every device and for every message, whether it's voice, text, photo, video, group or one-on-one. Open Whisper Systems, an organization that aims to advance secure communication technology, worked with WhatsApp over the past year to implement a full-coverage encryption system. Today, WhatsApp users will see notices in their conversation screens as their messages become secure.

The news comes during a tense time for encryption talk. A standoff between Apple and the FBI fizzled out just days ago when the bureau announced it didn't need Apple's help to crack the security features of the iPhone 5c used by one of the San Bernardino shooters. Apple campaigned for weeks in favor of encryption; CEO Tim Cook called the FBI's demand to unlock the secure iPhone unconstitutional. The FBI, in turn, called Apple's rhetoric corrosive.

Now, the second-most popular messaging app in the world is covered by a similar form of end-to-end encryption.

"While we recognize the important work of law enforcement in keeping people safe, efforts to weaken encryption risk exposing people's information to abuse from cybercriminals, hackers, and rogue states," WhatsApp writes. We've reached out to the FBI for comment on today's announcement.

Facebook bought WhatsApp in 2014 for $19 billion, largely to take advantage of its 450 million-plus userbase. Today, more than 1 billion people use WhatsApp across the globe. And now, they all use end-to-end encryption.

The WhatsApp team has been slowly rolling out security services since November 2014 at least, when it announced end-to-end encryption for text messages on Android. It's possible that terrorists used WhatsApp and another encrypted messaging service, Telegram, to help coordinate the deadly attacks on Paris in December.

"Building secure products actually makes for a safer world, (though) many people in law enforcement may not agree with that," WhatsApp co-founder Brian Acton tells Wired. He adds that secure communications allow people to safely become whistleblowers, or talk with doctors or business partners without the fear of eavesdroppers.

Update: The FBI declined to comment on WhatsApp specifically. For more on the bureau's stance on encryption in general, a spokesperson points us to Director James B. Comey's statement before the House Judiciary Committee on March 1st. It reads, in part, as follows:

"We must ensure both the fundamental right of people to engage in private communications as well as the protection of the public. ...We are seeing more and more cases where we believe significant evidence resides on a phone, a tablet, or a laptop -- evidence that may be the difference between an offender being convicted or acquitted. If we cannot access this evidence, it will have ongoing, significant impacts on our ability to identify, stop, and prosecute these offenders."

Via: Wired
Source: WhatsApp
In this article: culture, encryption, facebook, internet, messaging, mobile, openwhispersystems, security, services, whatsapp
All products recommended by Engadget are selected by our editorial team, independent of our parent company. Some of our stories include affiliate links. If you buy something through one of these links, we may earn an affiliate commission.