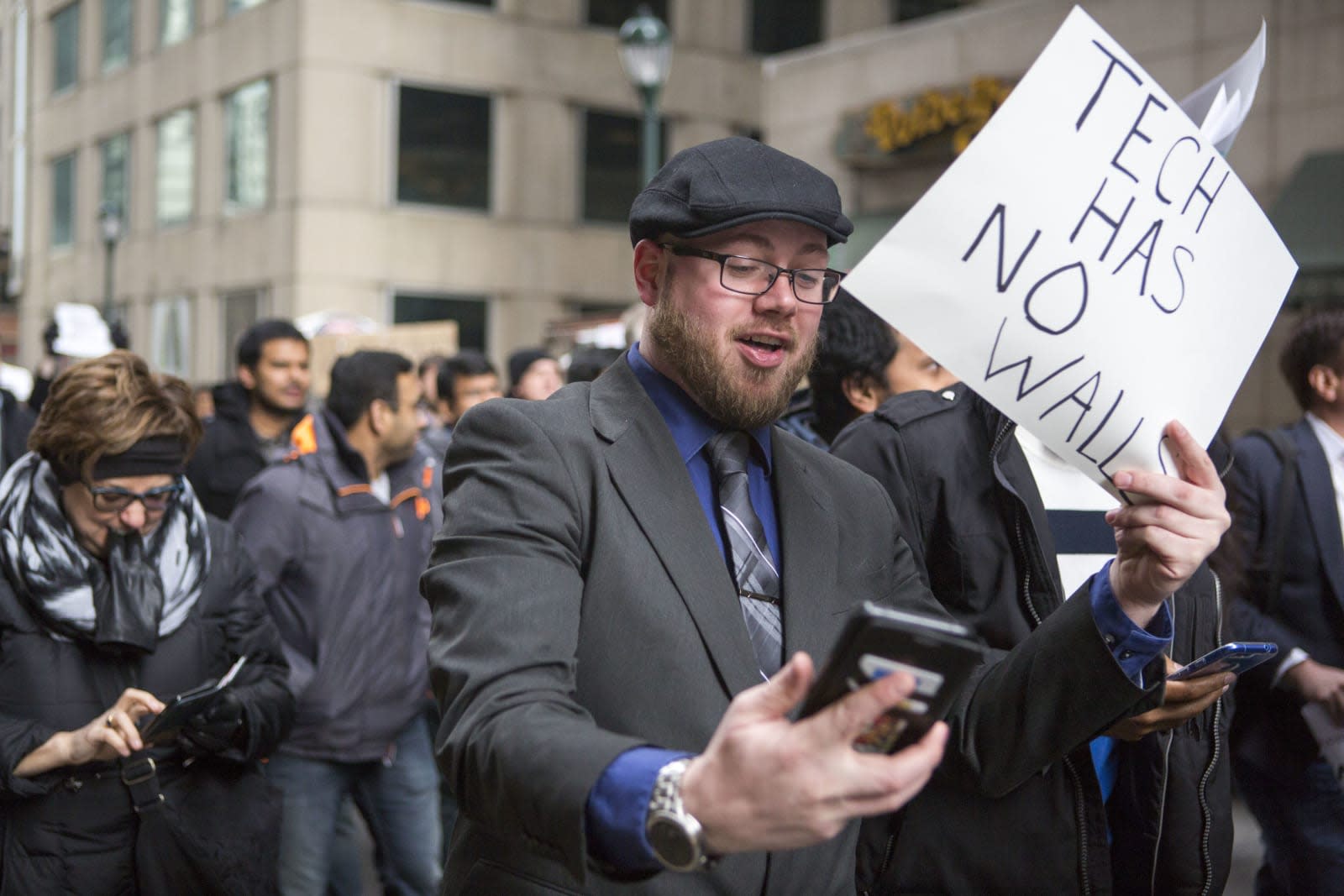 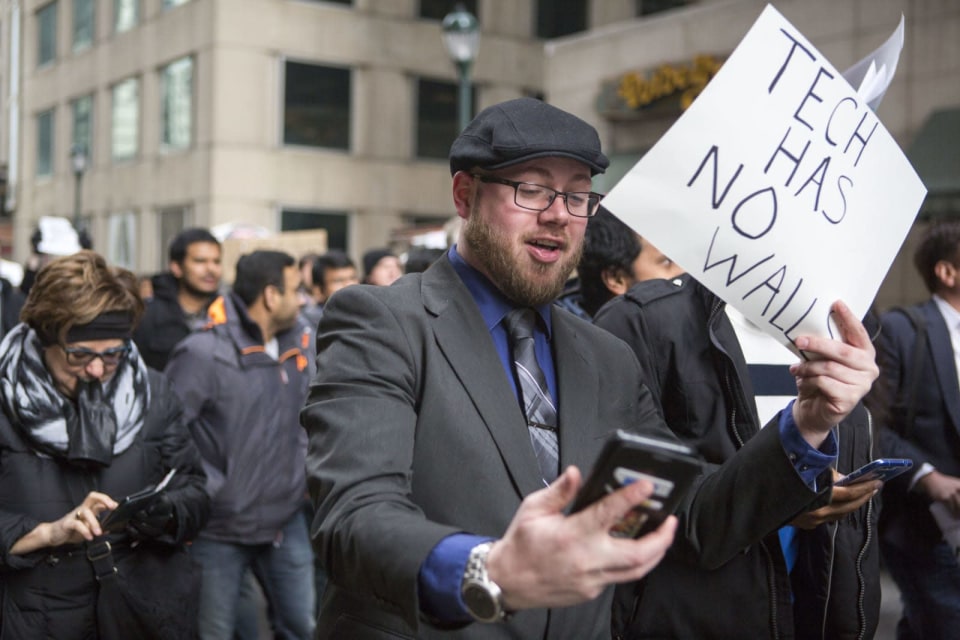 Almost immediately after President Trump signed an executive order banning immigrants from seven muslim majority countries from entering the US, tech companies have come out in force against it. The ban left hundreds of people detained in airports, even those with green cards. Some were even deported.

Google CEO Sundar Pichai sent out an urgent memo to employees to quickly fly back to the US or risk not being allowed in. "It's painful to see the personal cost of this executive order on our colleagues," he wrote. Later in the week, Google employees staged a walkout protesting the ban. Comcast employees did the same as well.

A whole host of other companies like Apple, Microsoft, Uber, Facebook and Airbnb have released statements denouncing the executive order as well. Several have stated they would offer legal help and advice to any employee affected by the ban. Lyft donated $1 million to the ACLU in response to the ban and Google donated $4 million to pro-immigrant causes.

Uber, which suffered some backlash after it continued services to JFK during a cab driver protest, also offered a $3 million legal defense fund for affected drivers. Still, over 200,000 customers deleted their Uber accounts, prompting CEO Travis Kalanick to step down from Trump's advisory committee.

As if it isn't clear already, Silicon Valley wouldn't be where it is today if it weren't for immigrant workers. Not only is the Google CEO himself an immigrant, but Sergey Brin, one of the company's co-founders, is a refugee from Russia. Microsoft CEO Satya Nadella is from India, just like Pichai. More than half of startups valued at more than $1 billion (also known as "unicorns") have an immigrant co-founder. What's more, many companies like Apple, Google and Facebook recruit a lot of foreign talent, especially in highly technical fields.

Recently, several big tech companies -- Apple, Google, Facebook and Uber among them -- got together to draft an open letter to Trump, directly addressing the recent immigration ban. It states that the ban is not only against the American dream, but also poses great economic risks. "In a global economy, it is critical that we continue to attract the best and brightest from around the world," it reads.

Another letter written by more than 115 startup founders and venture capitalists states: "Silicon Valley flourishes because of our free and open culture of entrepreneurship and excellence. The President's actions yesterday not only negatively affect Tech's competitiveness, they hurt the US economy overall."

And it might get even worse. Currently, the ban limits employees from the affected countries from entering the US, which in turn discourages them from leaving if they're already here. But the implications of this ban are far-reaching, even beyond those countries directly targeted by the order. There are tech workers from India and Pakistan that are worried about their immigration status, and many are afraid to leave the country, fearful that they would never be able to get back in.

Fueling their fears is a possible executive order that could overhaul work-visa programs, cancelling the annual lottery through which Silicon Valley companies sponsor tens of thousands of engineers. It's unclear yet on how many H1B visas will be allocated going forward and how restrictive the process will be.

A few days ago, more than 400 tech leaders in New York City penned a statement to Trump that best summarizes the impact that the executive order has on the tech industry, and by extension the country:

"In addition to all of the humanitarian reasons to welcome refugees, it is dangerous to discourage immigration when the facts show that immigrant entrepreneurs play a significant role in the American economy. Immigrants are more than twice as likely to start a business as the native-born population. Immigrant entrepreneurs started, in whole or in part, some of the most important technology companies of our time including LinkedIn, Tesla Motors, Zipcar, Google, Intel, Yahoo!, eBay, and WhatsApp. More than half of the companies on the current list of U.S. technology startups valued at $1 billion or more were started by immigrants.

We should be doing everything in our power to attract these entrepreneurs to the United States. Yet when we close the door to immigrants from certain countries, not to mention to refugees, we are telling all immigrants that they are not welcome here"

A little over 24 hours after Trump signed his executive order, federal judges in New York, Massachusetts and Virginia issued rulings that temporarily allowed those with legal documentation to get in, and some did. On Monday, former acting Attorney General Sally Yates questioned the legality of the order thus refusing to enforce it, but was promptly fired a few hours later by the President. Recently, Washington State filed a federal suit against the ban, with Amazon, Expedia and Microsoft declaring support for it. It won, with a federal judge issuing a nationwide restraining order on it.

As of right now, however, the ban is still in place. Protests are still going on at airports across the nation. The restrictions on those with green cards from affected countries have been lifted, but they are now subject to an additional line of questioning. There's no word on how many are still detained.

If the President continues to keep the ban in place, or worse, expand it to other countries, it could be disastrous for Silicon Valley. For one thing, it halts any plans for new foreign hires already in place. Companies would have to change their recruiting methods entirely, shifting their focus to a much smaller pool of people who might not have the same level of skill. Or, more likely, they would simply set up shop outside the US, which would result in a brain drain of talent to other countries.

The tech industry is a global one, and it depends on hiring workers and employees from around the world. A majority of Silicon Valley innovations were invented and founded by immigrants. Without them, we might not have the iPhone or Google or Amazon or many things we rely on everyday for our livelihood. Not only is shutting down our borders to a certain group of people based on religion immoral and unconstitutional, it's also economically unsound.

In this article: culture, immigration, muslim, politics, protest, tech, travel, trump
All products recommended by Engadget are selected by our editorial team, independent of our parent company. Some of our stories include affiliate links. If you buy something through one of these links, we may earn an affiliate commission.
Share
Tweet
Share