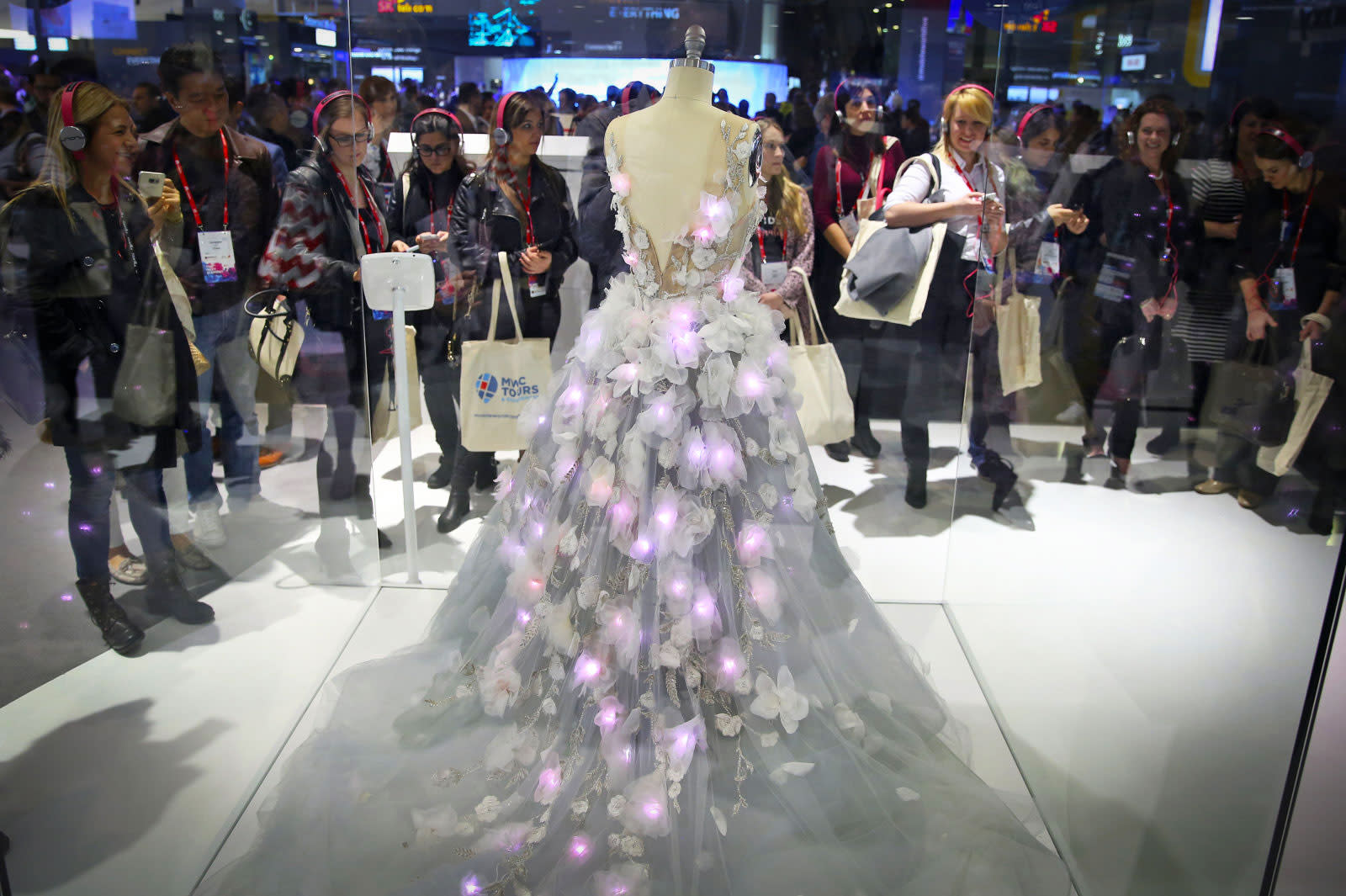 Fashion and technology will inevitably become one

Smart fabrics and power laces are just the beginning.

There's no denying that the technology world is obsessed with fashion. Amazon, Apple and Google, three of the biggest names in tech, are all trying to carve their own path into the fashion space. Apple's doing so with fancy smartwatches; Amazon with a shopping platform and voice-controlled cameras; and Google with conductive fabrics embedded in a smart jacket made by Levi's. And the interest is mutual. Fashion designer Karl Lagerfeld, Chanel's creative director, has expressed his love for tech by experimenting with partially 3D-printed pieces and runway shows that simulate a rocket launch. He's not the only one either. Zac Posen, with help from fashion house Marchesa, worked with IBM's Watson supercomputer to create a cognitive dress that lights up and changes colors based on activity on social media.

All of which is to say, the line between these two industries is blurring. Now more than ever, it feels like high-tech fashion is on the verge of being more than just a gimmick. In the not-too-distant future, you could even be 3D printing your own shoes or clothes at home. Instead of going to a store, you'll buy designs straight from the designer. And we're quickly heading toward a world in which "wearable" will be more than a fancy word for a smartphone accessory. Think about it: Your Apple Watch is basically a brick if you don't have an iPhone paired with it.

Three-dimensional printing has come a long way and is no longer just for prototyping. Sportswear giant Adidas, for example, is on the way to making 3D-printed shoes a consumer product as part of an effort known as Futurecraft, which began in 2015. Earlier this year, it teamed up with Silicon Valley startup Carbon 3D on a new manufacturing technique called digital light synthesis, which mixes light and oxygen with programmable liquid resins to create 3D objects in a matter of minutes. Adidas says this technology will allow it to 3D-print sneakers on a large scale; it's planning to ship 100,000 pairs by the end of 2018. While 3D-printed shoes may at first sound like a gimmick, the reason Adidas is betting on the technology is its customization potential. Imagine being able to walk into a store, hop on a treadmill, have your foot measured to a T and get a pair made based on your results in less than 24 hours. This approach means the shoes would match your footprint elements, including contour details and precise pressure points -- which, in turn, could give you the most amount of comfort.

Sponsored athletes already benefit from this, because brands typically custom-make designs for them, but the idea is to expand the concept to every consumer. That's the future Adidas imagines, one that's also going to depend on the company's Speedfactory, a manufacturing facility staffed by robots that can make products at a rapid pace and in high volumes. It's an automated assembly line that's straight out of a sci-fi film.

Vanessa Friedman, fashion director and chief fashion critic at The New York Times, says 3D printing will have a significant value for fashion companies down the road, especially if it transforms into a print-it-yourself tool for shoppers. "There's real sense that this is not going to happen anytime soon," she says, "but it will happen, and it will create dramatic change in how we think both about intellectual property and how things are in the supply chain." She adds: "Certainly some of the fabrications that brands can use will be dramatically changed by technology."

Nike, on the other hand, has been busy with self-lacing shoes. What started as a project inspired by nostalgia for the Mag -- a prop with power laces worn by Marty McFly (Michael J. Fox) in Back to the Future Part II -- has turned into something with larger implications. The HyperAdapt 1.0, which features a self-lacing system dubbed E.A.R.L. (Electro Adaptive Reactive Lacing), is essentially the consumer version of Nike's beloved Mag. The company says one of the reasons it created it is because athletes often complained about their shoes untying during workouts, and HyperAdapt solves that problem because it requires little to no effort when you're putting it on. It's a pricey solution, though -- each pair costs $720.

Still, just like high-definition TVs, they will in time go from being a luxury item to a run-of-the-mill commodity. While Nike isn't pitching HyperAdapt or E.A.R.L specifically to people with disabilities (particularly those unable to tie their own shoes), there's definitely potential there. Nike does have its Ease Challenge, a project that recruits outside designers and engineers to "advance and reinvent footwear design for athletes of all abilities." This year, Nike awarded $50,000 to the designer of a shoe with a heel counter that acts as a small door for your feet, removing the need to tie laces or use a shoehorn. The winner, Brett Drake, will work with the brand to create a prototype of the design and perhaps eventually bring it to market.

"This is the very first baby step toward having a truly adaptable shoe," Matt Powell, a sports-industry analyst at research firm NPD, says about Nike's E.A.R.L. technology. "It isn't just going to tighten or loosen laces; it could increase or decrease cushioning, it could ventilate or warm [the shoe]. This is a very, very small step in a long path of making footwear that is adjusting to our needs on the fly." Google's Advanced Technologies and Projects (ATAP), the group that handles the company's offbeat innovations (like the now-defunct Project Ara), has been rethinking the very materials clothes are made of. For the past couple of years, the tech giant has been experimenting with conductive fabrics that can make fashion garments smarter. With Project Jacquard, Google created a system for weaving technology that can turn clothes or any other textiles into gesture-controlled surfaces. Google hopes designers and developers will implement this tech in sensor-laden garments that can be used in everyday life, including jeans, T-shirts and jackets.

To show Project Jacquard's potential, Google teamed up with Levi's on a connected Commuter denim jacket that has 15 conductive threads on the left sleeve, each just visible enough for you to know where to touch to trigger certain actions. A Bluetooth cuff pairs the jacket to a smartphone, letting you brush your fingers on the smart fabric to check the time or swipe to play music, etc. And Google and Levi's could make the jacket more interactive.

Levi's and Google's Commuter jacket is slated to hit stores this fall for $350, and it's the first of many products the tech company hopes to see integrate with Jacquard. "We think about Jacquard as a raw material that will make computation a part of the language which apparel designers and textile designers and fashion designers speak," the company said when it introduced the tech at its I/O developers conference in 2015. "We want digital to be just the same thing as quality of yarn or colors used." More often than not, technology and fashion seem to have trouble understanding each other -- remember that underwhelming tech-themed Met Gala in 2016? So perhaps collaborations like Levi's' and Google's are the way forward. And although it's unclear if the smart denim jacket will be a success ( it probably won't be), Google is already planning to work with more fashion labels on future Jacquard projects. Who wants some Gap Jacquard khakis?

Whatever it may be, Friedman says tech companies need to figure out a way to make their fashion products less dependent on smartphones. "Right now we're just saying, 'OK, here we have these devices that we all love which is our phones. How can we attach that to something else that we have?'" she says."I think the real question is: 'What doesn't the phone do? What is something completely new that our clothes could do?'"

Kate Sicchio, an assistant professor of integrated digital media at New York University, says the future could be a "more embedded" one, in which the clothes or accessories we wear have a better way of sensing our every move. She says part of the problem now is that the tech industry doesn't necessarily take the time to fully understand our bodies or movement, but she's hopeful that'll change. "Electronics sometimes aren't flexible enough or don't form to the body quite right," she says. "We can't change the shape of the body, but hopefully we can mold our tech to fit it better."

Sicchio adds that it's imperative to move away from the smartphone being the brains of the operation. "That will make a huge difference," she says. "If we look at the history of ubiquitous computing ... in the '90s, all these MIT researchers had backpacks full of laptops, and now we just have this little [rectangle] we keep in our pocket, and soon that's going to disappear and it just will be a small microcontroller in our garments." We can't change the shape of the body, but hopefully we can mold our tech to fit it better.

Time to think outside the box

The hope, Sicchio says, is that soon enough we'll have clothes that will be able to collect your health and fitness data without the need for an auxiliary device like a smartwatch, band or phone. "That's one of these things that smart fabrics are really good at, they can be on the body and read the body," says Sacchio "So far, all we've done is quantify and measure that rather than apply it. Tech people have to realize there are experts on bodies and movements out there that they should be listening to."

Still, you get the feeling technology companies are on the verge of a major breakthrough in fashion, and it's only a matter of time before we see products that are both useful and accessible to everyone. We have to remember that what may seem like a gimmick now could end up laying the ground for something bigger: What if Google's Jacquard jacket could one day measure your heart rate, along with letting you pick which song to play next? Or if Nike's self-lacing shoes could also track your step count? That future can' be far off.

"Breakthroughs are hard," says Friedman. "They only come every once in awhile, and it requires someone who can really think outside any existing boxes, and most of us are very embedded in our boxes." It's hard to see the future, but we can take a guess at what it will look like based on today's reality. What's clear is that technology and fashion companies must work together to make this vision more than just a sci-fi fantasy.

All products recommended by Engadget are selected by our editorial team, independent of our parent company. Some of our stories include affiliate links. If you buy something through one of these links, we may earn an affiliate commission. All prices are correct at the time of publishing.
View All Comments
Fashion and technology will inevitably become one